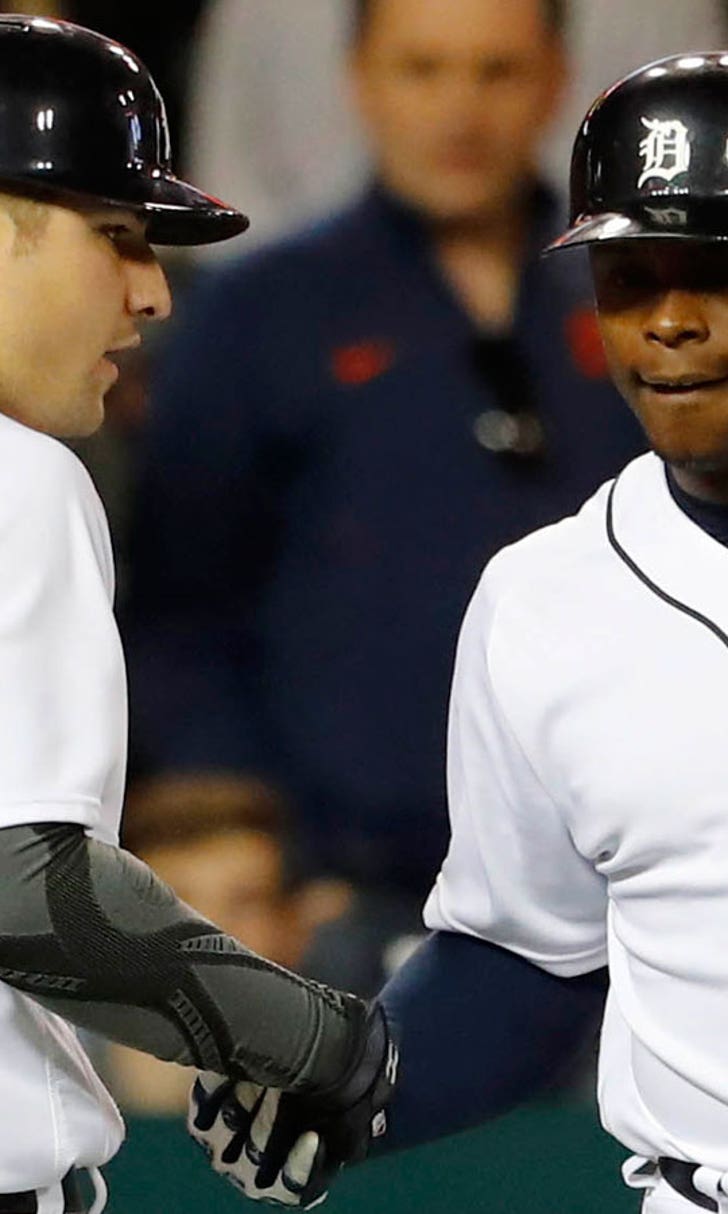 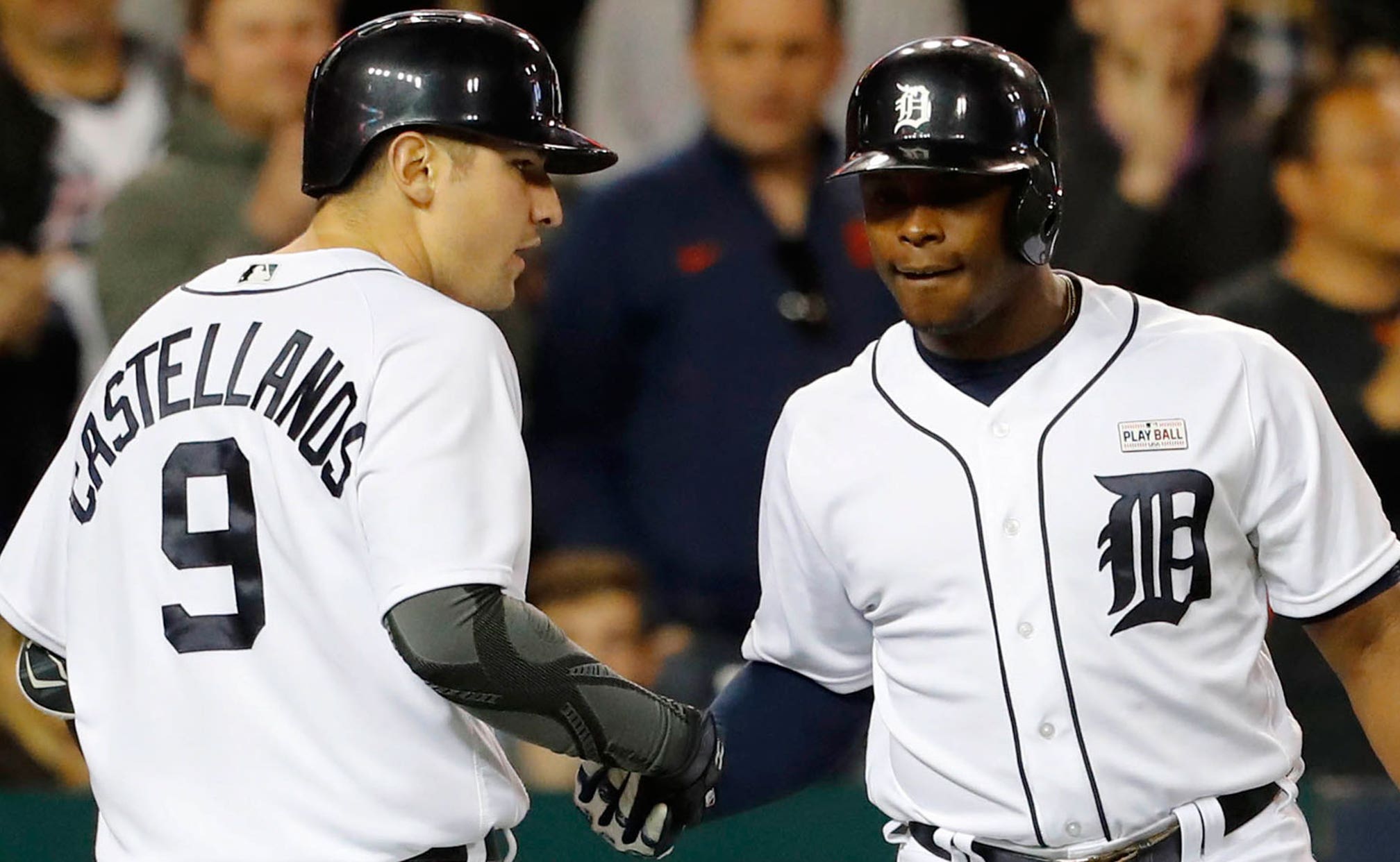 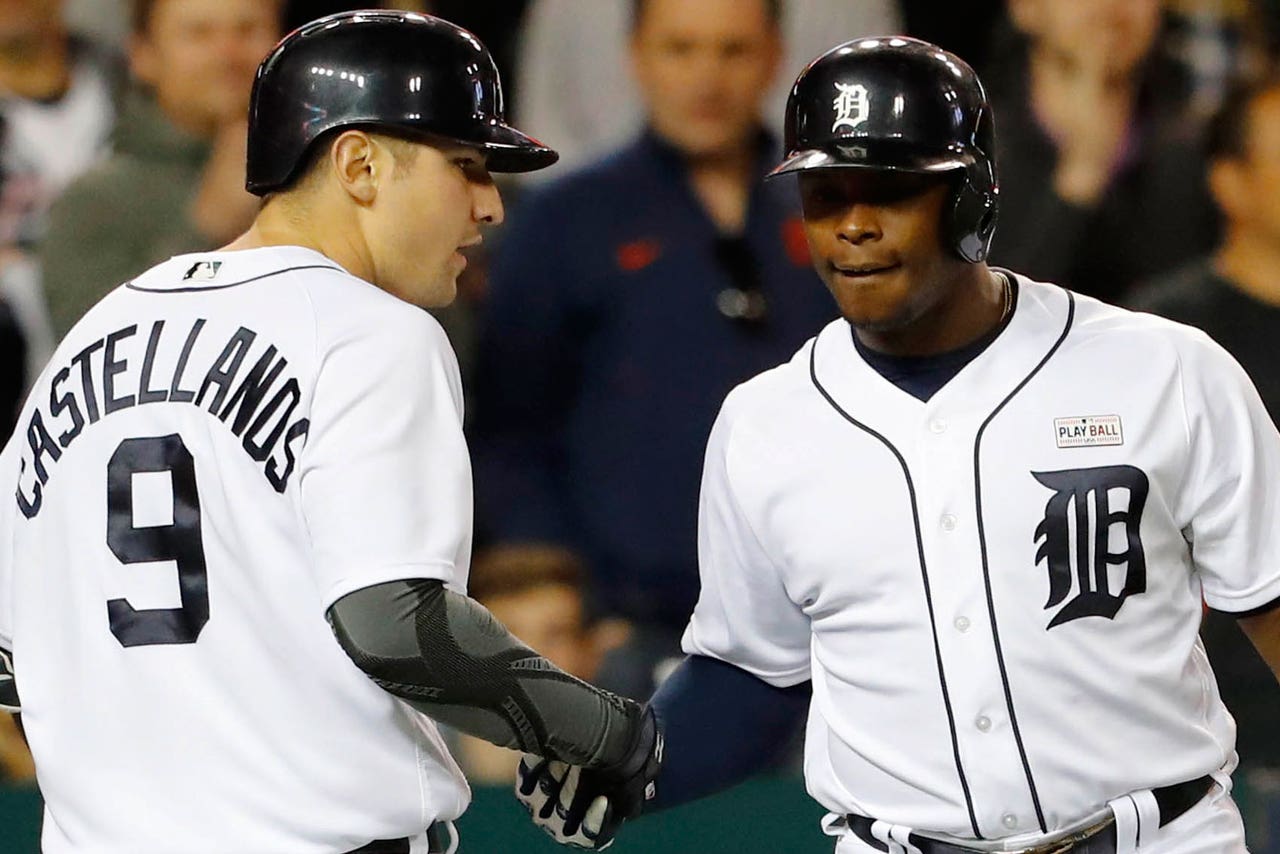 DETROIT -- Hours after admitting he knows he's in a tough situation due to his team's disappointing play, Detroit Tigers manager Brad Ausmus provided a memorable moment on a strange night.

The Tigers led 8-0 after one inning with AL ERA leader Jordan Zimmermann on the mound, only to see the Minnesota Twins come back to tie the game in the seventh.

Ausmus was gone by then, having been ejected in the fourth inning for arguing a called third strike with Minnesota within 8-7. During the argument, he took off his sweatshirt and used it to cover up home plate.

"When you get seven, eight guys coming back from home plate complaining about the strike zone, they can't all be wrong," he said.

Nick Castellanos saved more embarrassment for the Tigers, though, hitting a tie-breaking homer in the seventh. J.D. Martinez, whose dropped fly ball allowed the tying run to score in the seventh, homered in the eighth to give the Tigers a two-run lead.

"That's probably the most emotional game we've played this year," said Castellanos, the player Ausmus had been defending in the fourth. "When you see a manager do that, you know he has your back. That's what it is all about."

That was an important boost for Ausmus, who acknowledged before the game that he knows his job situation is precarious. Detroit came into the game having lost 11 of 13.

"We get it, I'm on the hot seat," Ausmus said. "I might get fired. We're done talking about it. We're beating a dead horse."

Castellanos homered off Pat Dean (0-1), who had entered the game in the first inning and threw 90 pitches in 5 1/3 innings.

"Our bullpen was used up, so I was trying to get as many innings out of Dean as I could," Twins manager Paul Molitor said. "That's just a tough lineup to face when you have zero margin for error."

Zimmermann (6-2) had only allowed eight earned runs in his seven starts this season, but gave up seven more, plus an unearned run, and 11 hits in seven innings. He struck out nine without walking a batter.

Francisco Rodriguez pitched a perfect ninth for his 10th save.

"It wasn't the prettiest game I've ever pitched," Zimmermann said. "It was crazy, but we survived."

Ian Kinsler gave the Tigers a lead on the first pitch of the first inning, driving it into the stands in left for Detroit's first leadoff homer of the season. The next two hitters walked, and Castellanos made it 2-0 with an RBI single.

Twins starter Jose Berrios continued to struggle to find the plate, walking Cameron Maybin to load the bases and Jarrod Saltalamacchia to give the Tigers a three-run lead. Jose Iglesias followed with a three-run double to make it 6-0 and end Berrios' night after nine batters.

"That's the first time in my career -- minors and majors -- that I had to come out in the first inning," Berrios said. "I was trying to hit the catcher's glove, but I was pulling all my pitches."

Kinsler greeted Dean with an RBI double, and Martinez made it 8-0 with another double. It was Detroit's biggest first inning since they scored 10 at Kansas City on Sept. 23, 2006.

Kurt Suzuki homered in the second to pull the Twins within six, and Miguel Sano's home run cut the margin to 8-3 in the third. Trevor Plouffe added another run for the Twins when he stole third and scored on catcher Saltalamacchia's throwing error in the fourth.

Things kept going right for the Twins in the inning, including a slow hopper up the middle that hit second base and two more infield singles. By the time Zimmerman struck out Byung Ho Park to end the inning, Minnesota was within 8-7.

Martinez's error tied it in the seventh, but Detroit's offense was able to rally.

Ian Kinsler hits a solo shot and the #Tigers are up 1-0 in the 1st! pic.twitter.com/ydcdFT8X8z

Twins: RHP Kyle Gibson (shoulder) threw a 30-pitch bullpen session on Monday, and is expected to face hitters on Thursday before a possible rehab assignment.

Tigers: RHP Shane Greene (blister) is expected to throw on Tuesday or Wednesday. Ausmus said that if he gets through that without further trouble, he will be prepared to report for a minor-league rehab assignment.

MOMENTS OF SILENCE: The Tigers held a moment of silence before the game to honor two former players, both of whom passed away during Detroit's road trip. Dick McAuliffe played for the Tigers from 1960-73, playing in three All-Star Games. McAuliffe was the starting second baseman for the 1968 World Series champions.

John Young played two games in 1971, but went on to found the Reviving Baseball in Inner Cities (RBI) program. One of its graduates, Justin Upton, is Detroit's starting left fielder.

ROSTER MOVE: As expected, the Tigers activated CF Cameron Maybin from the DL before the game. He fills the roster spot left open when Detroit optioned Anthony Gose to Triple-A Toledo after Sunday's win in Baltimore. Maybin had been sidelined since spring training with wrist and shoulder injuries.