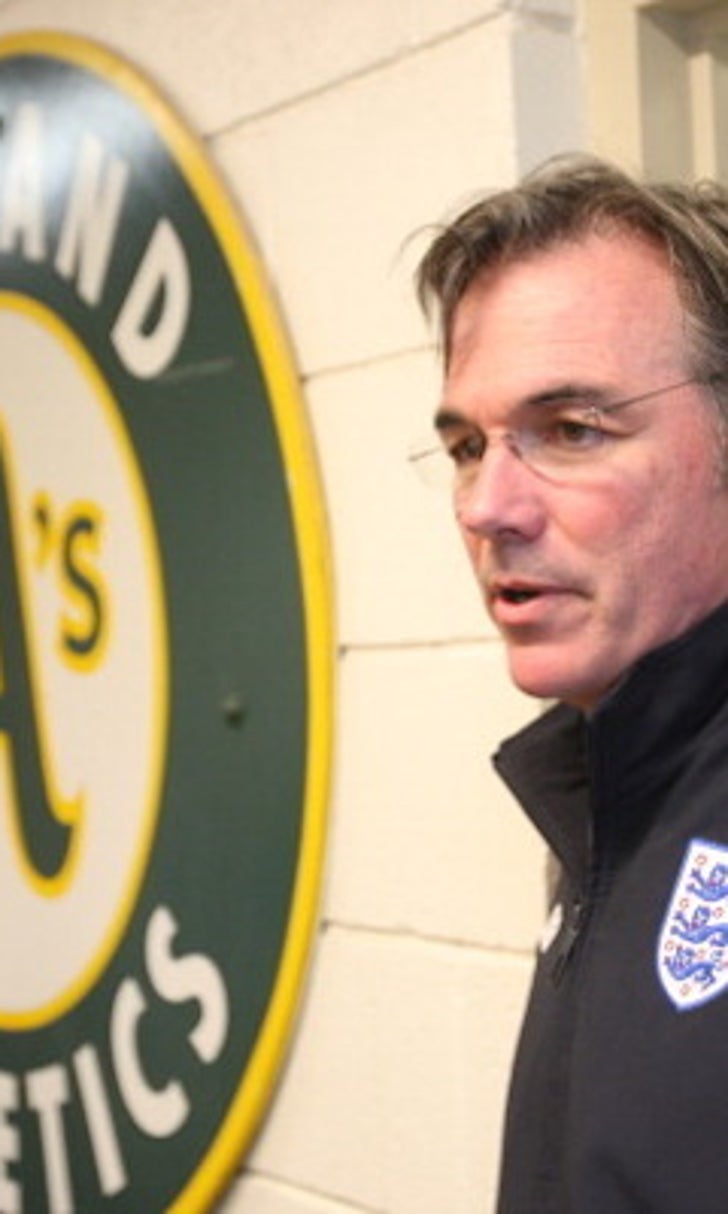 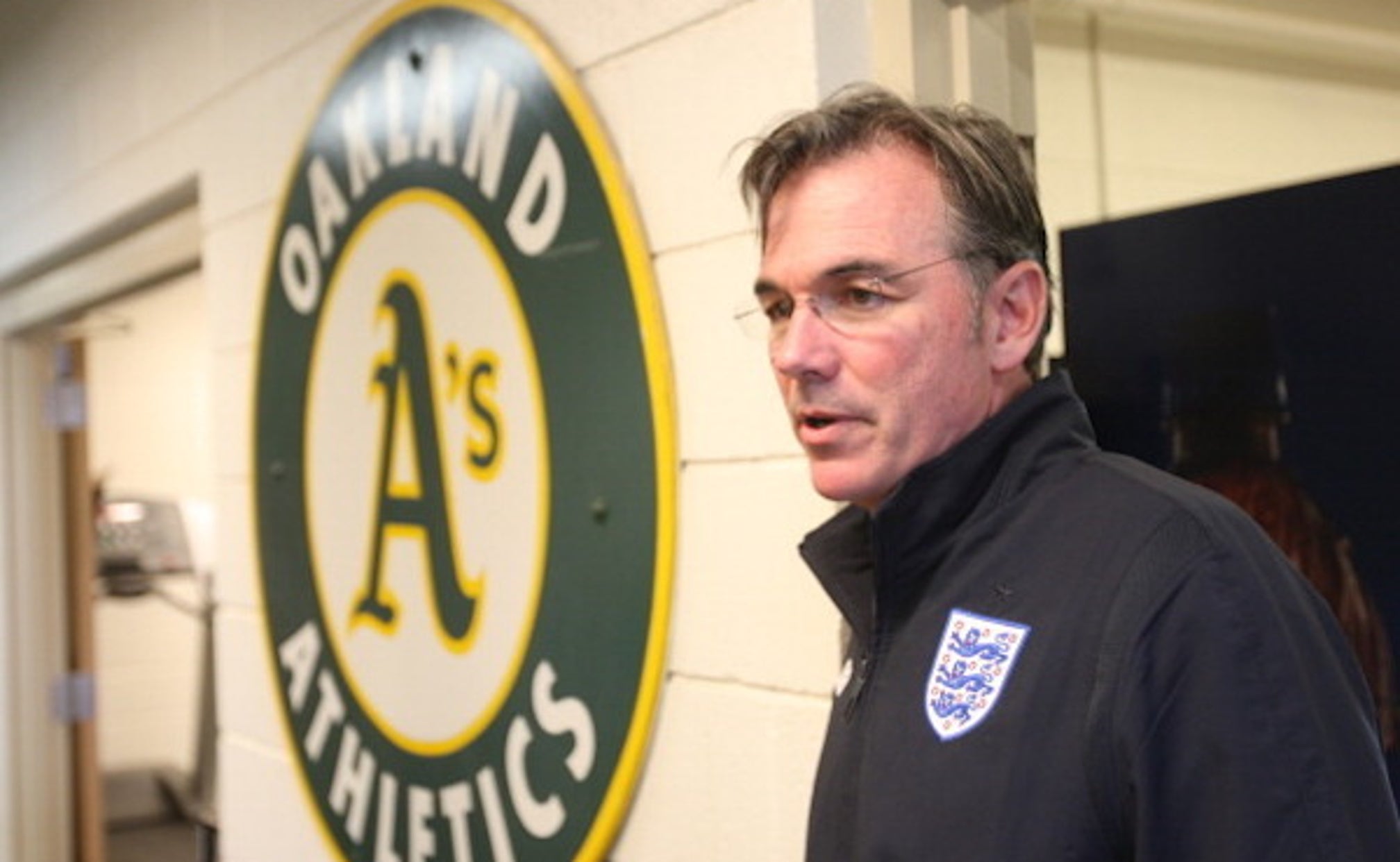 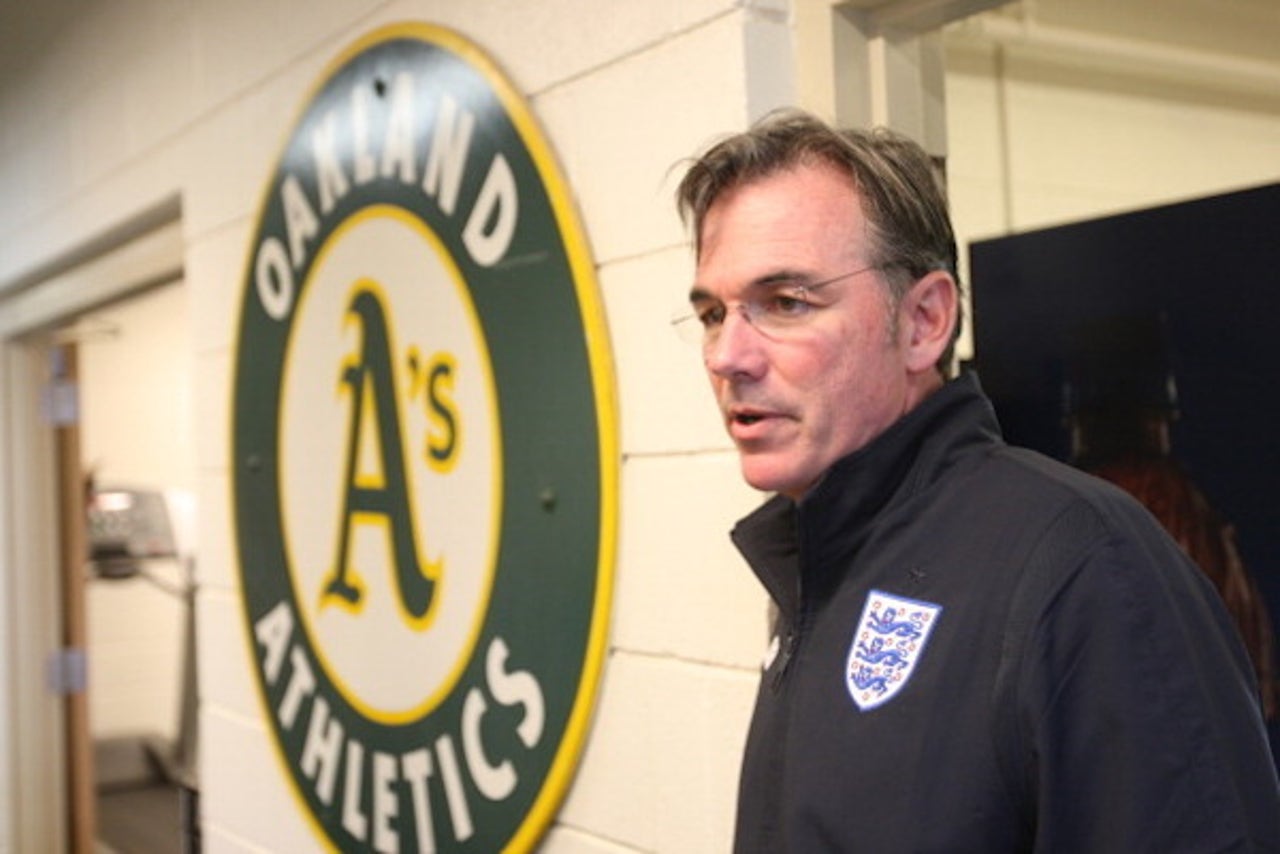 At the very bottom of the 2015 standings, you’ll find two unsurprising teams tied for the worst record in baseball: the Phillies and the Brewers. The Brewers have been a disaster, already firing their manager, and the Phillies are paying the piper for years of making moves to maximize short-term returns. But do you know which team is only a half game ahead of that pair of disasters? Well, you probably do if you clicked on this post, given that I put them in the subject, but yes, it’s the Oakland A’s, who currently stand at 12-21 after getting swept in Seattle over the weekend.

The A’s were expected to take a step back this year after trading away Josh Donaldson and a bunch of his friends, but while they spent the first half of the winter getting younger, they also went out and landed Ben Zobrist, Billy Butler, and Tyler Clippard, showing that they weren’t just punting on 2015. While they churned half the roster in an effort to set themselves up better for the future, this was supposed to be a team that could at least hang around the Wild Card race and maybe make another run at a division title if things broke right. Instead, after weeks of baseball, the A’s are 8.5 games behind the Astros, and their playoff odds have shrunk from 33% on Opening Day to 15% today.

While it’s still early enough to turn things around, there is a point at which the hole gets too big to dig out of, especially because other teams will likely start calling about impending free agents like Zobrist, Clippard, and Scott Kazmir in the next month or so. If they don’t start winning pretty soon, you can bet that Billy Beane won’t hesitate to make another flurry of trades to bring in even more young talent, so the A’s clock is ticking, and it won’t be too long before they have to decide if they’re in it for 2015 or not. Despite their miserable start to the season, I wouldn’t suggest giving up on this A’s team just quite yet.

If you’ve read FanGraphs for a while, you know we generally don’t suggest evaluating a team’s quality by their in-season Win-Loss Record. Especially earlier in the year, there can be an awful lot of non-predictive variables driving the results, and a team’s record isn’t always indicative of what they should expect going forward. In this specific case, no team has a larger gap between their underlying performances their current win-loss record than the 12-21 A’s.

One of the best tools we have here on the site is our BaseRuns Standings page, which gives an expected Win-Loss record (and expected runs scored/allowed rates) for every team based on the context-neutral values of every play they’ve been involved in throughout the season. BaseRuns is the best public estimator of how well a team’s individual events should add up to runs and wins, but if teams end up clustering their hits (or hits allowed) together, they can produce results that are quite a bit different than what a context-neutral estimator would suggest. 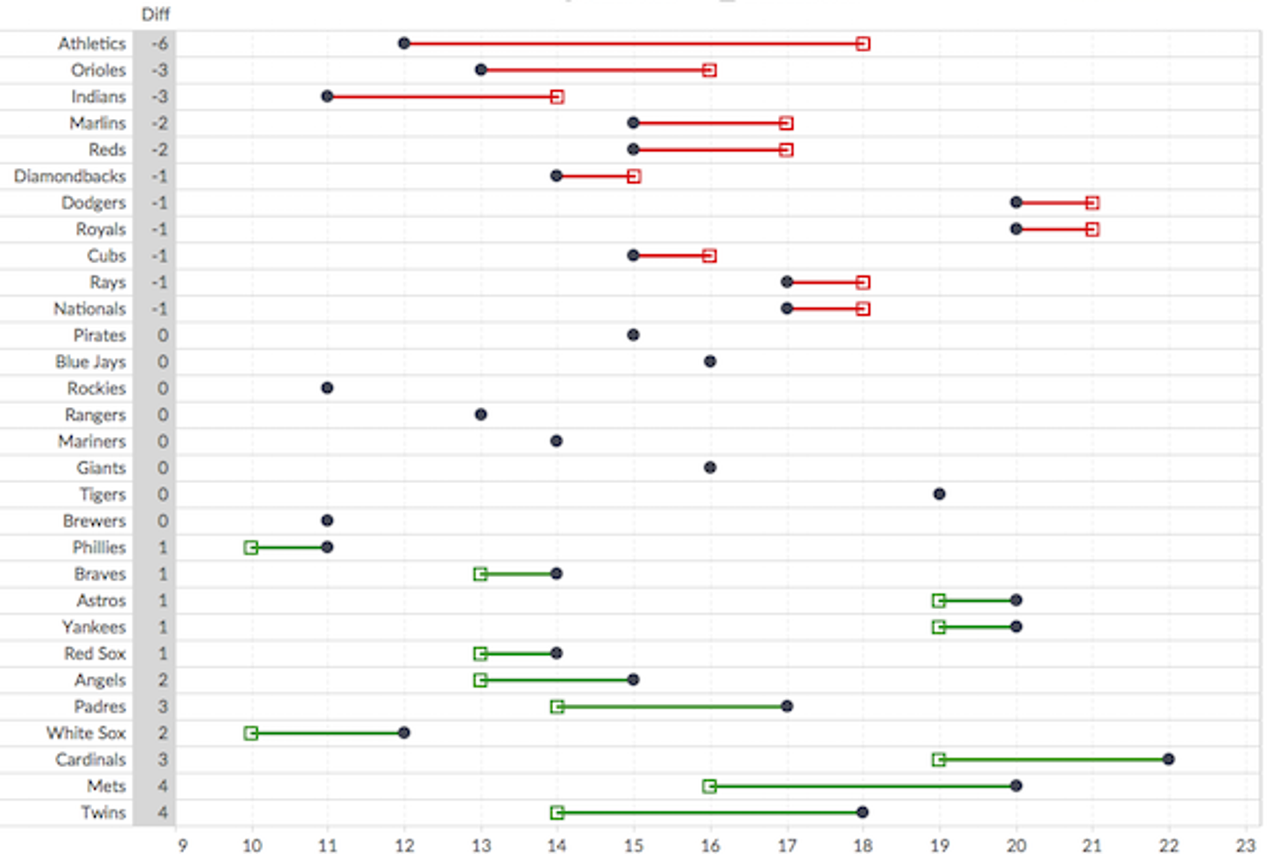 As is usually the case when teams have massive divergences like this, the first place to look is the bullpen, and the A’s bullpen has been a disaster. Their bullpen’s 5.16 ERA is 28th in MLB, as is their 4.44 FIP; their 4.50 xFIP ranks 30th. But again, those are context-neutral numbers, and BaseRuns is including those struggles in the calculations. But it’s context-specific performances where the A’s pitching staff has really let them down, and this is how you play pretty well overall but still lose 21 of 33 games. 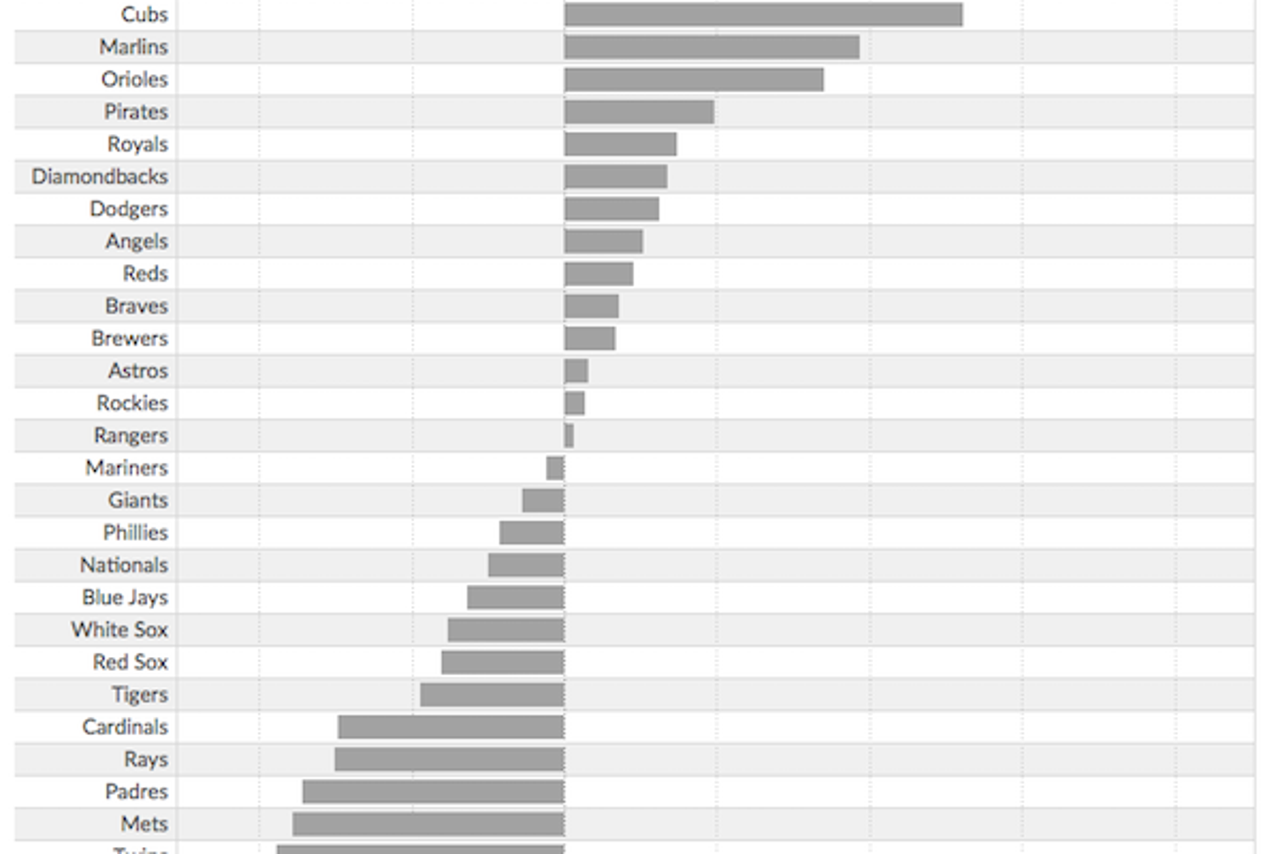 In low leverage situations, the A’s have allowed a .266 wOBA, third best in baseball. In high leverage situations, they’ve allowed a .411 wOBA, second worst* in baseball. For context, their pitchers have turned opposing hitters into Alexi Amarista in situations where the battle isn’t that close, but allowed them to morph into Mike Trout when the game is on the line. And that is why the A’s are 1-10 in one run contests this year.

Bullpen disasters are frustrating to watch, leading to things like trading for Edward Mujica because trying anything else feels like a better option than sticking with the status quo. But as hard as it is to watch lead after lead get squandered, the good news is that this kind of thing is about as random as baseball gets. For instance, note which team is just a few spots down from the A’s on the chart above; the Baltimore Orioles. Those same Baltimore Orioles that have been defying the BaseRuns gods for years by putting up some of the great clutch bullpen performances in baseball history.

When we’ve suggested previously that the Orioles deviations from their BaseRuns expected record could be explained by simple random variation, Baltimore fans have argued strenuously that we were missing out on the fact that Buck Showalter has just figured out how to game the system, and the model just doesn’t apply in that case. And yet, with Showalter still in charge and a bullpen of mostly the same guys who have been fantastic the last few years, the Orioles relievers have been highly un-clutch this year, leading the O’s to underperform their own expected record by three wins.

This shouldn’t be a huge surprise, given the fact that pretty much every study of the issue has shown that there’s little or no predictive value in winning one-run games. This is the kind of thing that has a big impact on the standings, but shouldn’t really drive much of our expectation about what will happen going forward. As frustrating as it is to watch your team lose by one run over and over, it’s a lot easier to flip the switch and start winning those games than it is to stop getting blown out.

So, realistically, we should still think the A’s are mostly what we thought they were going into the season; a slightly better than average team, a fringe contender who needs a few things to go right to make a strong run. Unfortunately, they’re now starting the race at a significant disadvantage, and even with Zobrist and Doolittle returning at some point int he not-too-distant future, it won’t be easy for the A’s to climb back in the race. They’re going to need their bullpen to stop blowing leads now, and they’re probably going to need to get some clutch performances to win more games than we’d expect going forward if they’re going to run down the four teams ahead of them in their own division.

But the Astros probably aren’t a great team, even if they’ve played really well for the first month and change of the season. The Mariners and Angels look pretty flawed as well, and the Rangers probably aren’t a serious contender, so if there’s a division to try and make a big comeback in, it’s the AL West. But it’s starting to get late for the A’s, and they can’t wait much longer to turn this around. Beyond just getting Doolittle back, their bullpen is going to have to get things figured out in a hurry, because the rest of the team is playing well enough to keep the A’s in the race. If the A’s relievers don’t hold up their end of the bargain pretty soon, a decent team could find themselves as mid-season sellers.