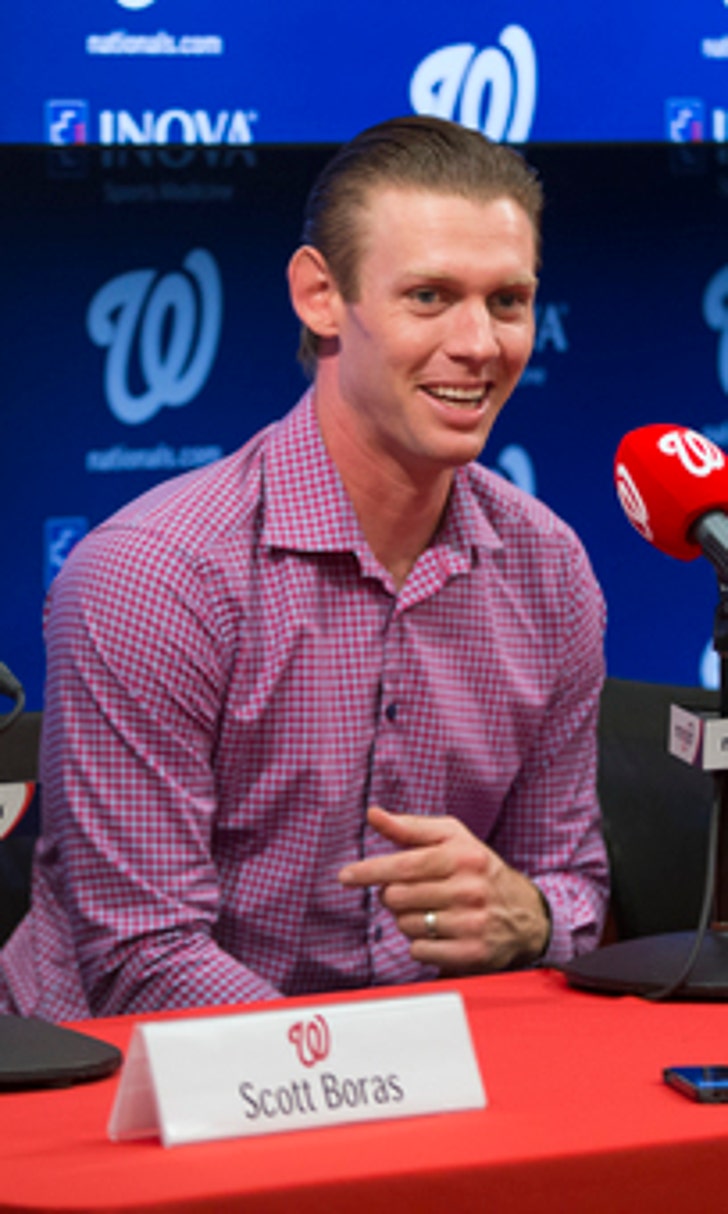 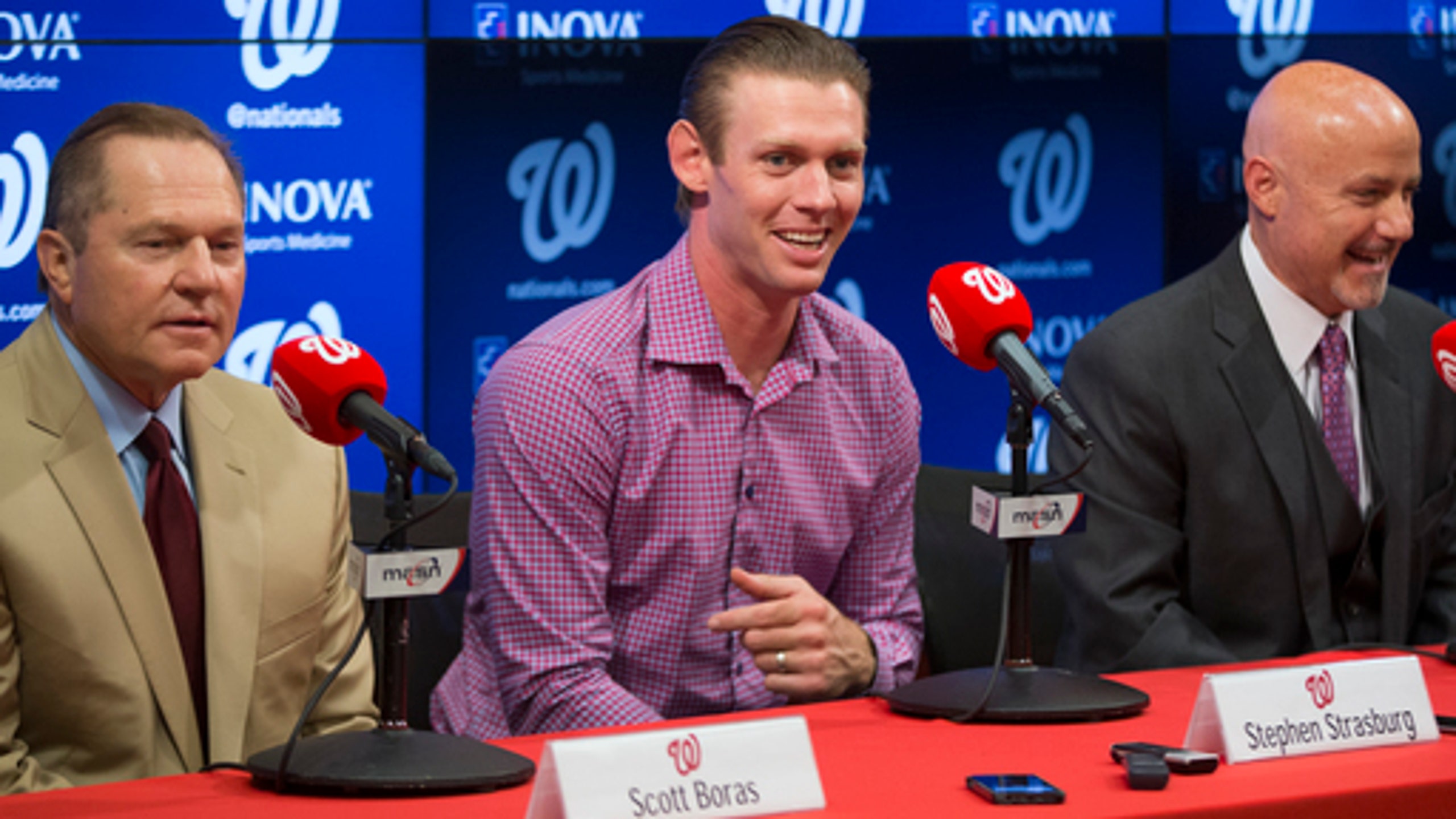 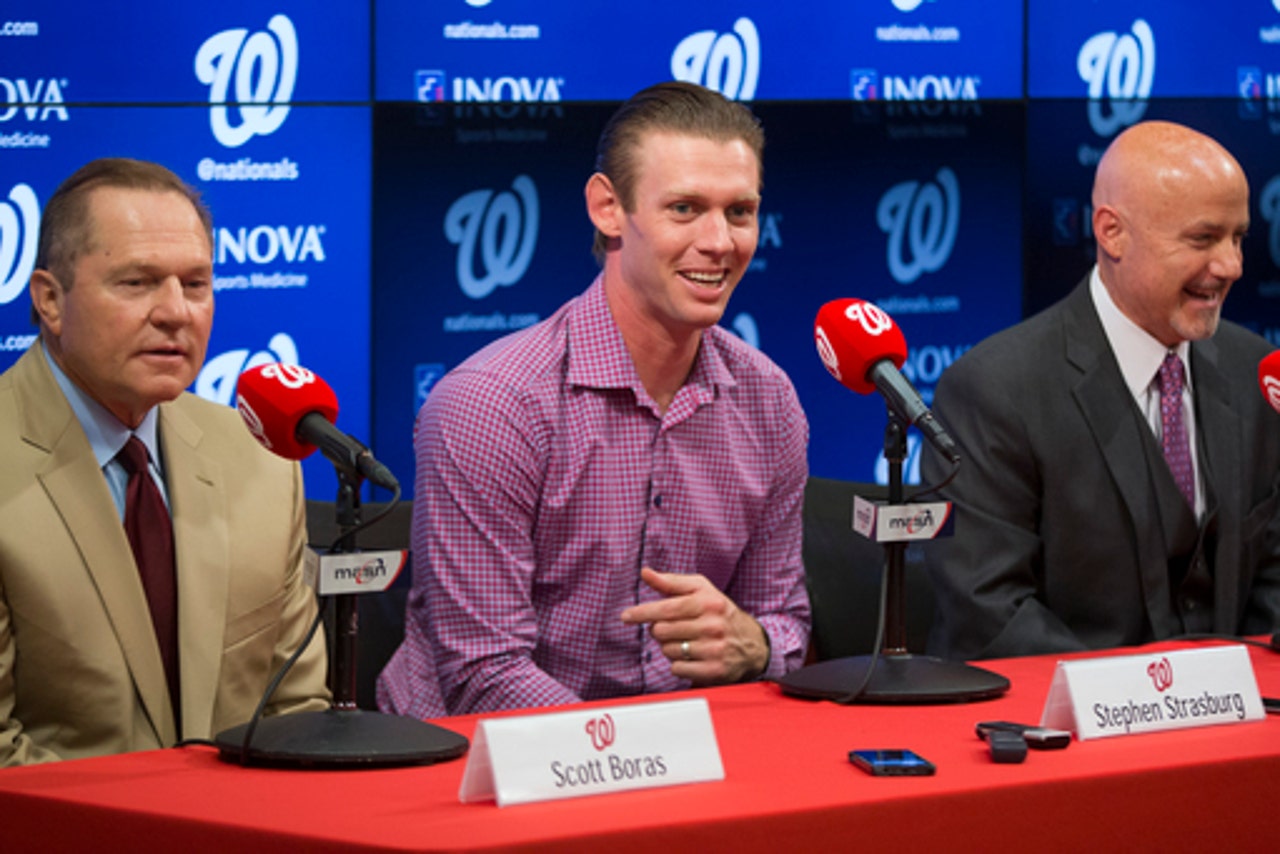 WASHINGTON (AP) So all these years later, it sure sounds as if Stephen Strasburg signed a $175 million, seven-year contract with the Washington Nationals precisely because of their decision to end his 2012 season before the playoffs - not despite it.

''As a competitor, it was a very tough pill to swallow,'' Strasburg said Tuesday about the much-debated shutdown to protect his surgically repaired right elbow.

''But I think, at the end of the day, you have to look at what their intentions are. And I think their intentions are that it's an investment, and they want me to be here pitching at a high level for a long time. Hopefully with this group of guys, we can have more opportunities to be in that spot again.''

Flanked by agent Scott Boras and Nationals general manager Mike Rizzo at a news conference, Strasburg smiled often. He laughed at his own jokes.

He spoke of being comfortable in Washington - with his team and his family. His 2-year-old daughter sat on mom's lap in the front row during the proceedings, a white ribbon with a red curly ''W'' in the tot's hair.

Over and over again, the topic of what happened four years ago arose Tuesday.

''At that point, my thoughts were that (the shutdown) was unprecedented, actually, in baseball, No. 1. And my second thought was there was no guarantee that they were going to get back (to the postseason) again.

''So it's sort of a 50-50 tossup on my opinion of which one was right. Was it right for him? Evidently it was,'' first-year Nationals manager Dusty Baker said. ''That was a very bold move, I think, at the time, especially for a town that hadn't had very much success. So I've got to commend Mike Rizzo and these guys ... for not being afraid to do what they think is right.''

Listen to what Rizzo himself said: ''I think the way we treated him and his family with the shutdown, as painful as it was for him, he knew it was for the right reasons. I think that played into it.''

And Boras, too: ''Ethic had a lot to do with Stephen Strasburg here, too. And that the ethic of this franchise was, really, `medical first.' It was listening to medical advice.

''It was, in advance of a season, saying that this player's health was a priority that exceeded all others. I know for me, and for the industry, and for the player, certainly those things - it's an ethic that you don't forget in an ownership.''

That was offered as a significant reason for why Strasburg decided to pass up what would have been his first crack at free agency if he had waited until after this season to entertain offers from around the majors.

Instead, Boras said, Nationals principal owner Ted Lerner reached out to him a few months ago to start talks and they essentially wrapped up the deal two weeks ago - yet somehow everything was kept quiet.

Strasburg even sneaked away from the team while it was playing a series in Kansas City a week ago to get a physical exam that would allow everything to become official.

''I guess your secret's safe with me,'' Strasburg said with a chuckle.

While the Nationals referred to the deal as an extension, the contract submitted to Major League Baseball is separate from his one-year deal for 2016, making it a new, seven-year contract starting in 2017, with $70 million in deferred money.

The use of a deferral structure is similar to the $210 million, seven-year deal that the Nationals gave another Boras client, right-hander Max Scherzer, before last season.

Strasburg would earn a $1 million performance bonus each year for pitching 180 innings. The new contract has an escape clause: Strasburg can opt out and become a free agent after the 2019 or 2020 seasons.

If Strasburg opts out after three seasons, $30 million deferred from his 2019 salary would be paid out in three $10 million installments each July 1 from 2020-22.

''This is the first one I've ever done,'' Rizzo said of the opt-out. ''It seems to be the en vogue ingredient to get a long-term deal with certain players.''