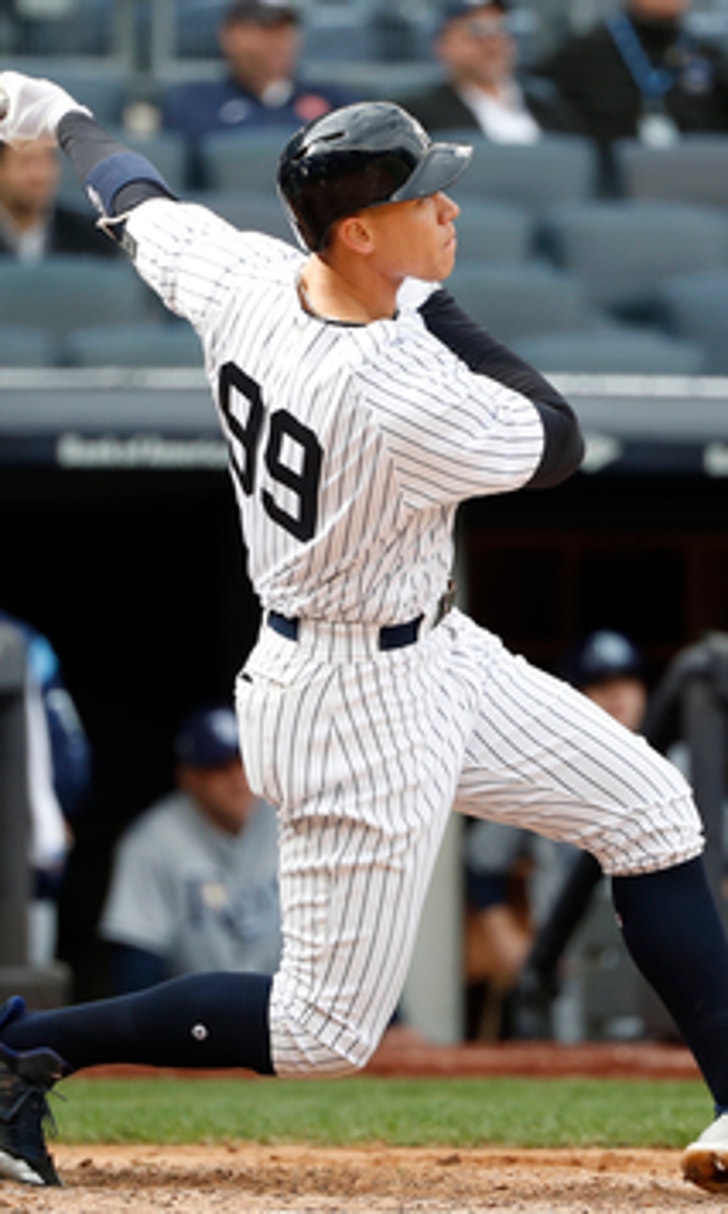 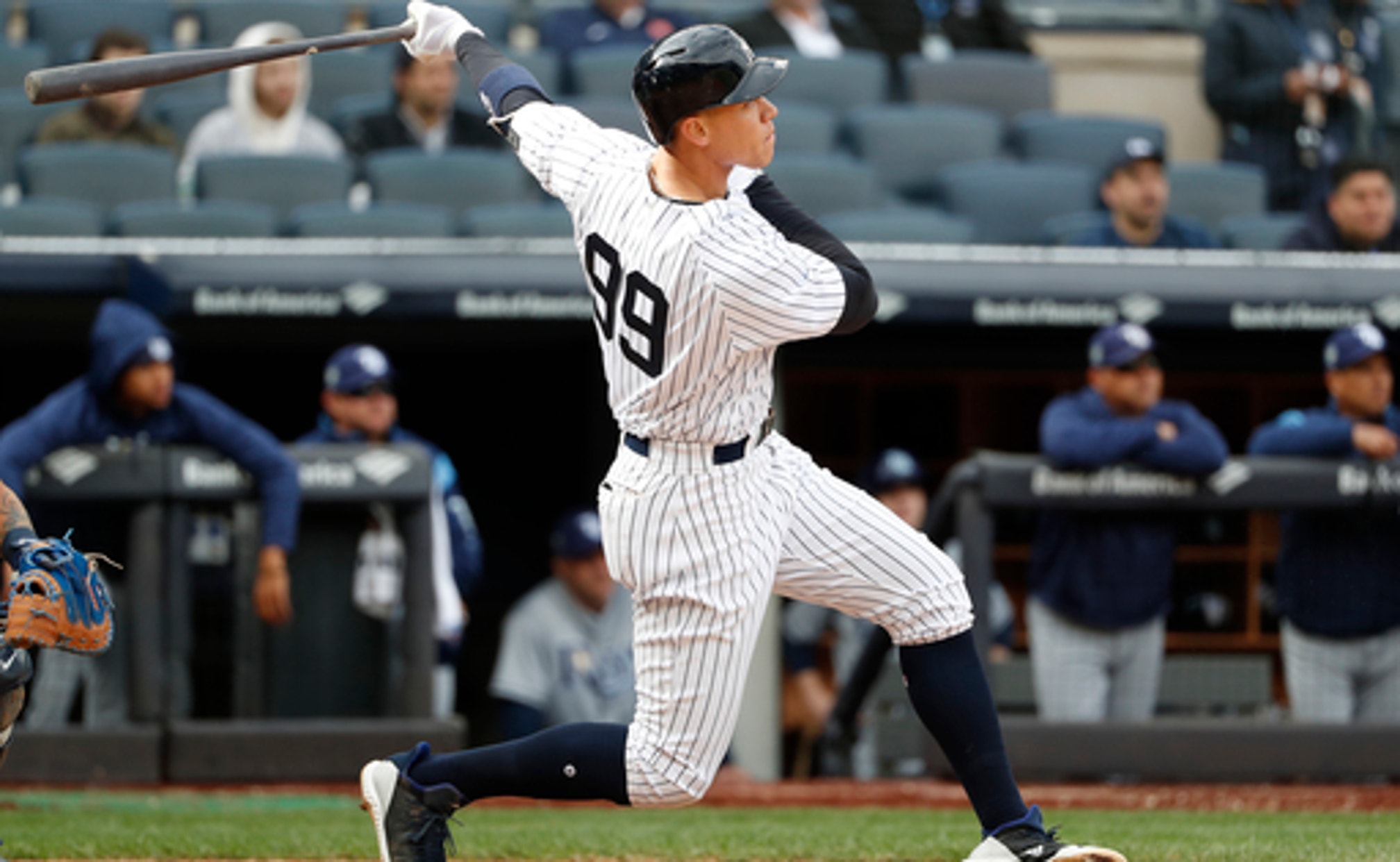 NEW YORK (AP) Giancarlo Stanton turned on a high slider from Blake Snell, and the cracking sound in Yankee Stadium was exceptional.

The newest slugger in New York's lineup watched the drive head about 10 rows into the left-field second deck at 117.9 mph, the hardest-hit ball in the major leagues so far this young season.

Even before the ball landed 458 feet from home plate, Stanton flipped his bat with gusto toward New York's dugout and headed on a trot around the bases with his first Yankees home run in pinstripes.

Fans cheered, those career-high five strikeouts from the home opener a distant memory, along with the boos.

Stanton hit an emphatic go-ahead drive in the first inning , and Judge and Gary Sanchez also hit two-run homers. The Bronx Bombers lived up to their nickname with a 7-2 win over the already reeling Tampa Bay Rays on Wednesday that completed a two-game sweep.

''Hopefully we'll put some back-to-back-to-backs in there,'' Stanton said, ''but it's good that we all got one today.''

Luis Severino (2-0) allowed two runs and five hits with seven strikeouts in 7 1/3 innings , the longest outing by a New York starter this year. The Yankees improved to 4-2 under new manager Aaron Boone and won their 11th straight home series against the Rays.

Tampa Bay has lost five straight games since beating Boston in its opener and is off to its worst start since 2011.

C.J. Cron put the Rays ahead in the first when he lined an RBI double to left that got past Stanton, who didn't cover much ground. Second baseman Ronald Torreyes, in his first game this season, saved a run with an inning-ending over-the-shoulder grab of Wilson Ramos' pop into short right.

Brett Gardner reached on a single leading off the bottom half, and Stanton put New York ahead with his first home run since he hit a pair in Thursday's opening win at Toronto. As he rounded third, he took an imaginary handoff from coach Phil Nevin.

''Brings back the football days,'' Stanton said. ''Stopped playing back in high school.''

''I think his teammates got fired up,'' Boone said.

Stanton also struck out three times, giving him eight in his past nine at-bats and 12 this season. The trio has whiffed 25 times in six games, including eight by Judge. At the same time, 21 of New York's 35 runs have scored on homers.

''We have guys with huge power that are also going to punch from time to time,'' Boone said. ''Eventually our power is going to show up, and over the course of time we think it's going to add up to a lot of runs, hopefully night in and night out.''

Snell needed 77 pitches to get through three innings and was chased after throwing 90 to get 10 outs. He allowed five runs and four hits.

''I was just nitpicking in general,'' he said. ''I was trying to be too perfect against a good lineup.''

Sanchez's third-inning drive on a high changeup ended an 0-for-17 slide. Torreyes greeted Matt Andriese with an RBI single through the drawn-in infield in the fourth and Judge boosted the lead to 7-1 with his first home run this season. Andriese gave up a home run to Judge in the slugger's first big league at-bat in August 2016.

''Those guys make their money really teeing off mistakes and not missing them, and they didn't miss them,'' Rays manager Kevin Cash said.

The game's start was delayed 1 hour, 32 minutes by rain. Sun finally broke out in the middle innings.

Kevin Kiermaier singled and struck out three times, leaving him 2 for 23 with 10 strikeouts.

New York obtained INF/OF Cody Asche from Kansas City for a player to be named or cash and assigned him to Triple-A Scranton/Wilkes-Barre.

Yankees: OF Aaron Hicks (strained ribcage) is hitting and thinks he could be activated from the DL on Monday, the first day he is eligible. .. RHP Adam Warren pitched two-thirds of an inning in his first appearance since he was hit on the right ankle by a comebacker on Saturday.

Rays: RHP Yonny Chirinos (0-0) will start at Boston on Thursday, four days after he relieved against the Red Sox in his big league debut.

Dodgers Bounce Back Thanks To Buehler
L.A. reclaimed the momentum in Game 3 vs. the Rays, while Randy Arozarena's last-chance homer mattered more than you think.
18 hours ago

World Series Top Plays: Game 3
From Walker Buehler's lights-out night to the Dodgers' mashing at the plate, check out the best moments from Game 3.
21 hours ago