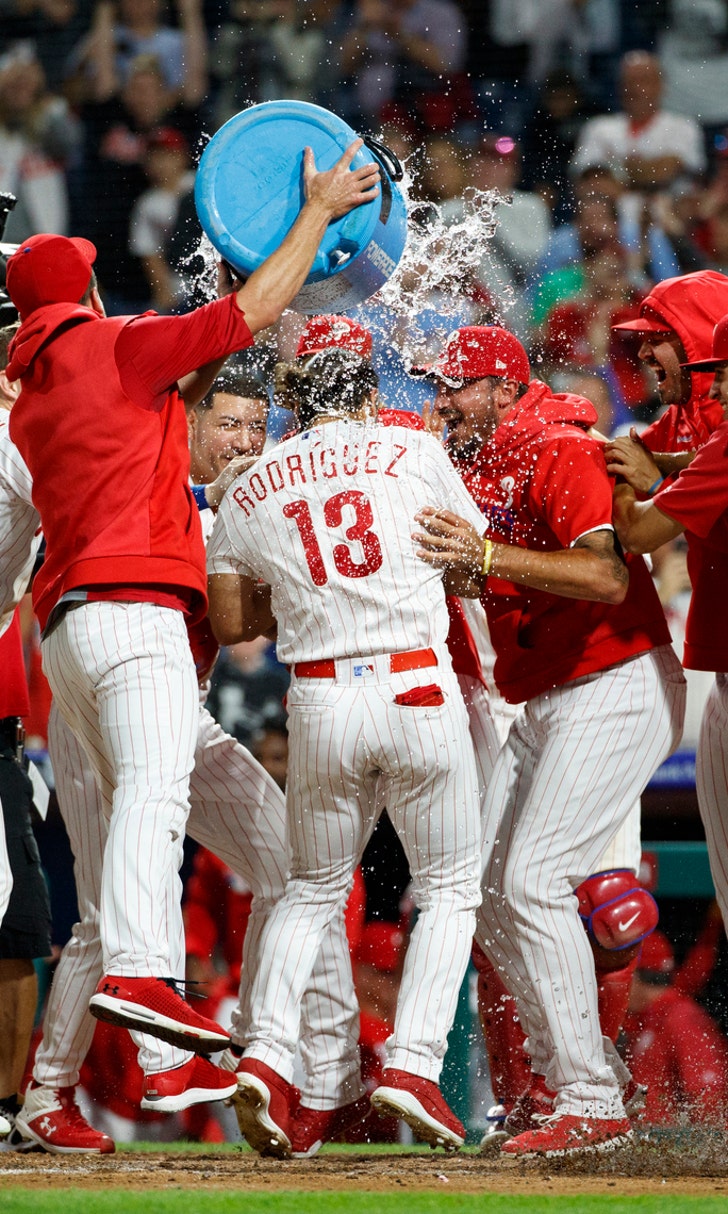 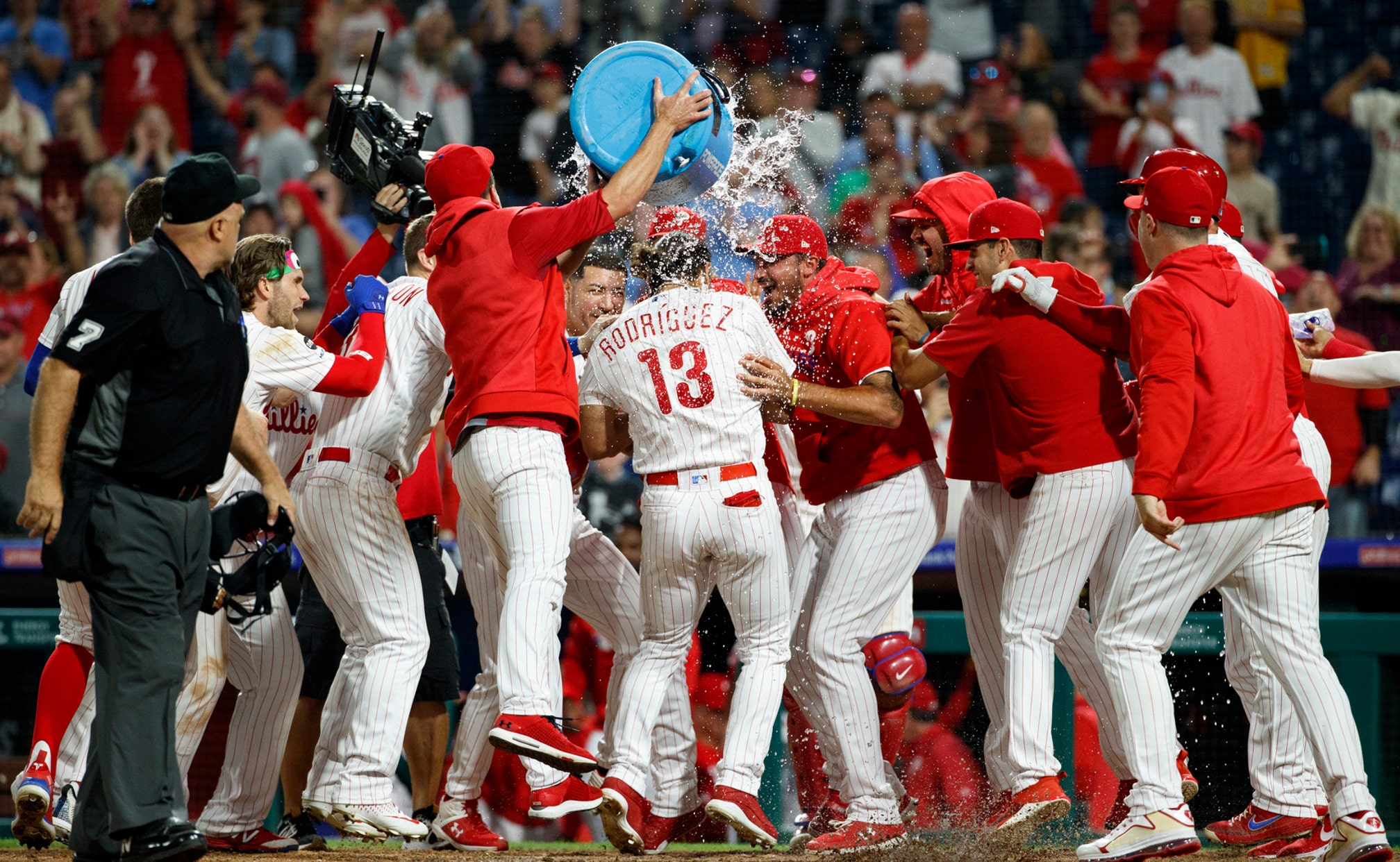 Rodriguez homers in 11th to lift Phillies over Pirates 6-5

PHILADELPHIA (AP) — Sean Rodriguez lined a home run leading off the bottom of the 11th inning to give the Philadelphia Phillies a 6-5 victory over the Pittsburgh Pirates on Monday night.

Josh Bell hit a solo homer off Philadelphia closer Hector Neris to tie it at 5 in the ninth after Corey Dickerson hit a two-run shot against his former team in the eighth to give the Phillies a one-run lead.

But after stranding five runners in the ninth and 10th, the Phillies won it when Rodriguez went deep against Michael Feliz (2-4) for his fourth career walk-off homer. Rodriguez was in a 1-for-21 slump before he connected.

Philadelphia moved within a game of the idle Cubs for the second NL wild card.

Bryce Harper homered with two outs in the eighth in his first game back from paternity leave to cut it to 4-3. After J.T. Realmuto's infield single, Dickerson ripped one out to put the Phillies ahead 5-4.

Dickerson, acquired from the Pirates before the July 31 trade deadline, has 21 RBIs in 19 games for the Phillies.

The Cardinals, who have won five straight, jumped on starter Gio Gonzalez (2-2) for eight runs in the first two innings en route to their 14th victory in 17 games.

Yadier Molina and Paul DeJong each homered and drove in three runs for St. Louis, which moved a season-high 14 games above .500. The Cardinals extended their NL Central lead to three games over the Cubs. The third-place Brewers dropped 5½ back.

KANSAS CITY, Mo. (AP) — Marcus Semien homered, tripled and drove in a career-high seven runs as Oakland set season highs for runs and hits in a rout of Kansas City.

Jurickson Profar, Matt Chapman and Khris Davis also went deep for the Athletics, who are locked in a tight race with Cleveland and Tampa Bay for the two American League wild cards. Josh Phegley drove in three runs and scored three times. Four players had three hits and every starter got at least one as Oakland finished with 22.

Seth Brown singled in the first two at-bats of his big league career, scored twice and drove in a run.

Oakland scored five runs in both the second and third, backed by Semien's big hits.

McMahon drove a fastball from Jerry Blevins just over the scoreboard in right field for the second game-ending homer of his career. Nolan Arenado started the inning with a walk against Anthony Swarzak (1-2).

Jairo Diaz (5-3) blew a save in the ninth but got the win as the Rockies stopped a four-game skid.

It was a makeup from an April 10 game postponed due to inclement weather, forcing Atlanta to crisscross the country.

Torres launched his 33rd homer of the season on the first pitch of the second inning from Tommy Milone, who took over after Matt Wisler was used as an opener. It was the start of a four-run rally for the AL East leaders. Austin Romine had an RBI single and Ford added the big blow with a two-run shot down the right field line.

Ford, previously a Rule 5 pick by the Mariners and later returned to the Yankees, added a solo homer in the fourth. The three home runs boosted the Yankees' total to 64 in August, a major league record for any month.

Aroldis Chapman pitched the ninth for his 36th save.

SAN DIEGO (AP) — Greg Garcia scored the tying run on a throwing error by center fielder A.J. Pollock, and Manny Machado drove in the go-ahead run on a groundout during a three-run rally in the sixth inning that carried San Diego past Los Angeles.

Dodgers rookie Dustin May (1-3) took a 3-1 lead into the sixth before the Padres rallied to hand the NL West leaders their third loss in four games.

Eric Lauer (7-8) improved to 5-0 against the Dodgers in seven career starts. He allowed three runs and six hits in six innings, striking out eight.

All-Star closer Kirby Yates pitched the ninth for his major league-leading 38th save in 41 chances.

Justin Turner and Kiké Hernández homered for the Dodgers. Turner also had an RBI double.

SAN FRANCISCO (AP) — Arizona outfielder Jarrod Dyson made a pair of stellar defensive plays in the sixth inning after Eduardo Escobar scored the go-ahead run on a wild pitch, and the Diamondbacks held on to beat San Francisco.

Adam Jones delivered his third pinch-hit homer this season. Wilmer Flores added three hits and an RBI to help the Diamondbacks to their sixth win in eight games against the Giants.

Alex Young (6-3) allowed two runs, one earned, in 5 1/3 innings and beat the Giants for the second time this year. Archie Bradley earned his eighth save.

Dyson's defense stood out on a night when two teams chasing an NL wild card combined for four errors.

Galvis had three hits and Eugenio Suárez hit his 36th homer for the Reds.