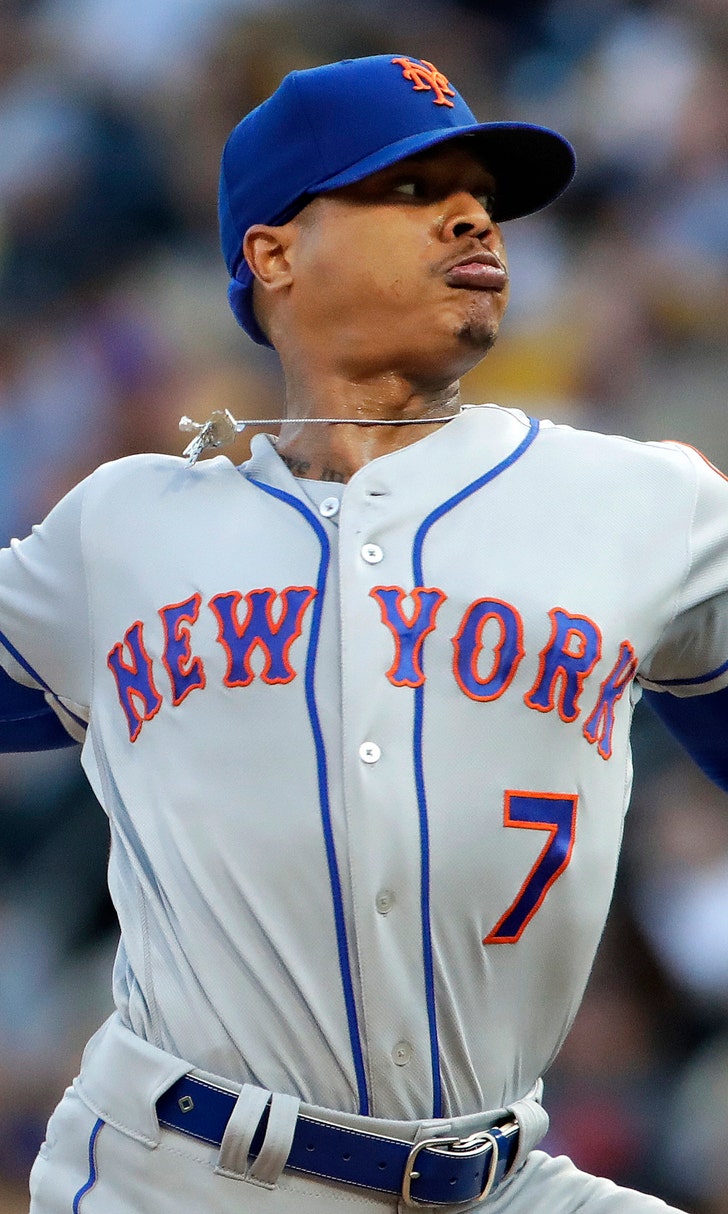 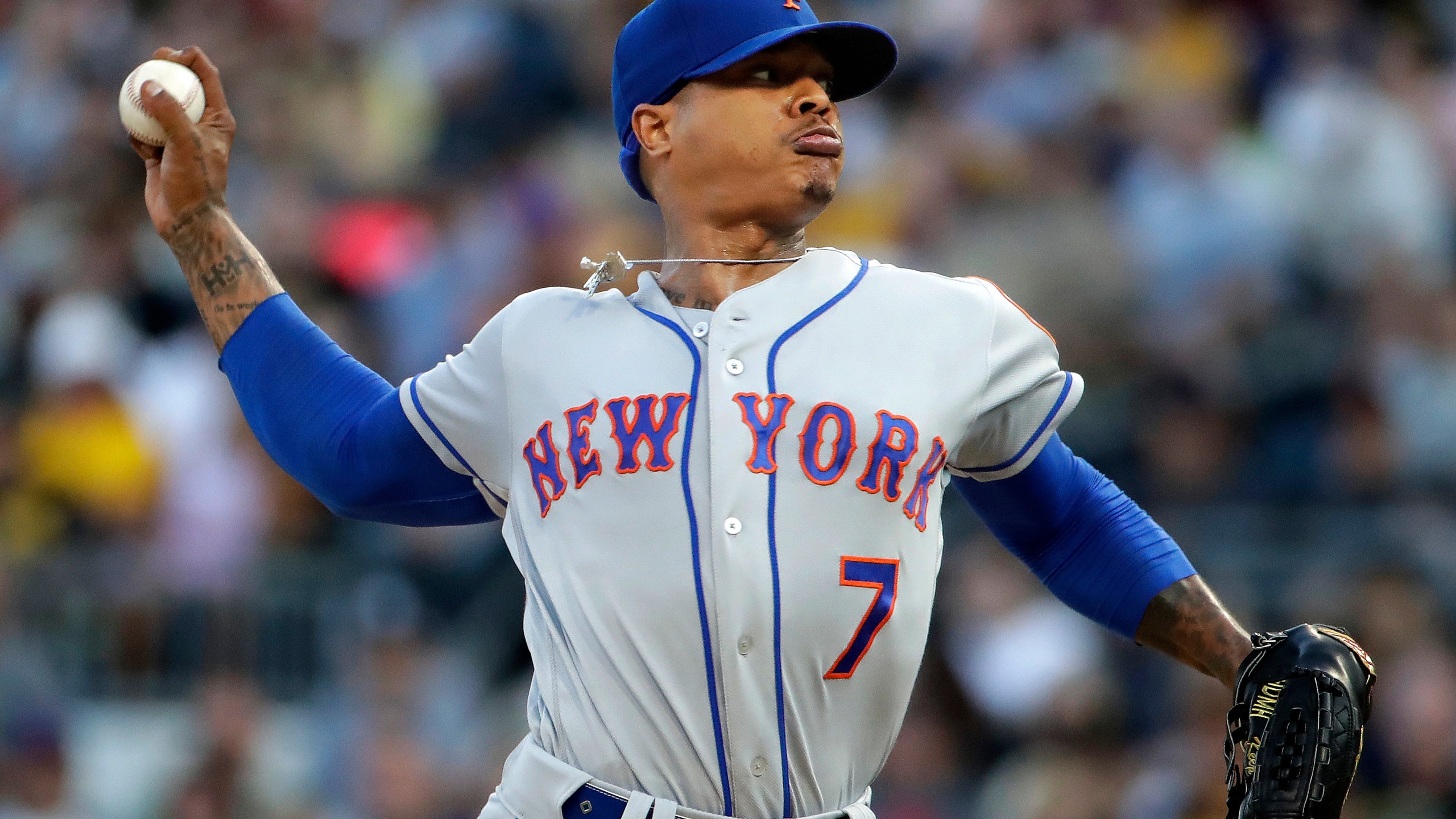 Maybe, but the All-Star pitcher is still getting used to his surroundings. New clubhouse. New catcher. New opponents. New stakes. It's a lot to take in. And for an inning on Saturday night, Stroman looked like one of those players he watched growing up on Long Island, the ones who couldn't handle the bright lights of playing in New York.

Stroman labored through a 35-pitch opening frame before settling in and keeping the Mets in range of the Pittsburgh Pirates long enough for catcher Wilson Ramos to key a 7-5 comeback victory.

The right-hander — acquired in a trade with Toronto last week — was admittedly not as sharp as he'd like while lasting 4 1/3 innings in his National League debut. But Ramos made sure it didn't matter, hitting a go-ahead two-run home run in the eighth inning and adding a three-run double in the ninth to give the Mets their ninth win in 11 games.

"My command was a little iffy but my body felt great," said Stroman, who gave up three runs seven hits with two walks and three strikeouts. "Just need to make a few adjustments on my mechanics and I think I'll be ready for my next one."

New York trailed 3-1 in the seventh when Jeff McNeil hit a pinch-hit solo home run to get the Mets within one. Robinson Canó doubled off Kyle Crick (3-6) leading off the eighth and Ramos followed with a shot to the seats in right-center field to put New York in front.

Ramos provided insurance in the ninth when his drive to the Clemente Wall in right field off Chris Stratton cleared the bases. Ramos finished 4 for 5 with a career-high six RBIs. The Mets, who saw a seven-game winning streak snapped on Friday, won for just the fifth time this season when trailing after the seventh.

"I think that tonight was elusive to us in the first half," New York manager Mickey Callaway said. "It was tough to stop the bleeding and I think we understand we have to do that. I don't think we've ever given up. We've just got to get it done. It seems like we're getting it done."

Bryan Reynolds had four hits for Pittsburgh. Starling Marte went 3 for 5, including a two-run home run in the bottom of the ninth off Mets closer Edwin Díaz to get the Pirates within two. Díaz struck out the last two batters to drop the Pirates to 4-17 since the All-Star break.

Stroman hadn't pitched since July 24 and the layoff may have played a factor in his early struggles. He ducked into the clubhouse after the first inning to look at video of his mechanics, made a tweak and eventually got into a rhythm. He retired eight straight at one point but was lifted after walking Josh Bell to put runners on first and second with one out in the fifth.

It wasn't dominant, but it was enough to keep the Mets close.

"He didn't have his great stuff," Callaway said. "I'm sure the energy was off the charts. New team. New York. It's his hometown. Pitching for the first time and he battled. He was probably rusty because he hasn't pitched in a long time and he was out there doing everything he can to keep guys from scoring."

Stroman's debut with the Mets came on the same night Pittsburgh starter Chris Archer celebrated his one-year anniversary in Pittsburgh. Archer received a standing ovation after earning a victory over St. Louis in his debut with the Pirates on Aug. 3, 2018, a nod to the optimism the trade to bring him over brought to a young club trying to stay competitive in the NL Central.

The honeymoon ended quickly. Archer is just 6-11 with the Pirates and is winless in his last 10 starts. Still, he overcame a shaky 33-pitch first inning to work six innings, giving up one run on five hits with two walks and six strikeouts. Archer also kept the ball in the park, a rarity for a pitcher who has allowed 25 home runs on the season.

"When he's on top of his game, that's what he does," said acting Pirates manager Tom Prince, filling in for the suspended Clint Hurdle. "He settled in after that first inning. Thought he did a really good job."

Pirates: Placed RHP Richard Rodriguez on the paternity list and called up reliever Parker Markel from Triple-A Indianapolis. Pittsburgh claimed Markel from Seattle on July 27. RHP Keone Kela began serving his 10-game suspension for his role in a brawl in Cincinnati on Tuesday. Utility player Jose Osuna (five games) and Crick (three games) are still awaiting word on their appeals.

Mets: Noah Syndergaard (7-5, 4.10 ERA) has thrown at least seven innings in each of his last four starts, striking out 36 against just seven walks.

Inside The Trading Card Boom
Once a way for children to show off their fandom, the sports card collecting space is going through a mega-boom, Martin Rogers writers.
9 hours ago

How MLB Win Totals Are Made
Predicting how many games MLB teams will win isn't as simple as plugging data into a computer. Sammy P explains it all.
16 hours ago

The Face Of Baseball
The Padres were wise to bet on rising superstar Fernando Tatis Jr. for the next 14 years, Ben Verlander writes.
February 18
those were the latest stories
Want to see more?
View All Stories
Fox Sports™ and © 2021 Fox Media LLC and Fox Sports Interactive Media, LLC. All rights reserved. Use of this website (including any and all parts and components) constitutes your acceptance of these Terms of Use and Updated Privacy Policy. Advertising Choices. Do Not Sell my Personal Info