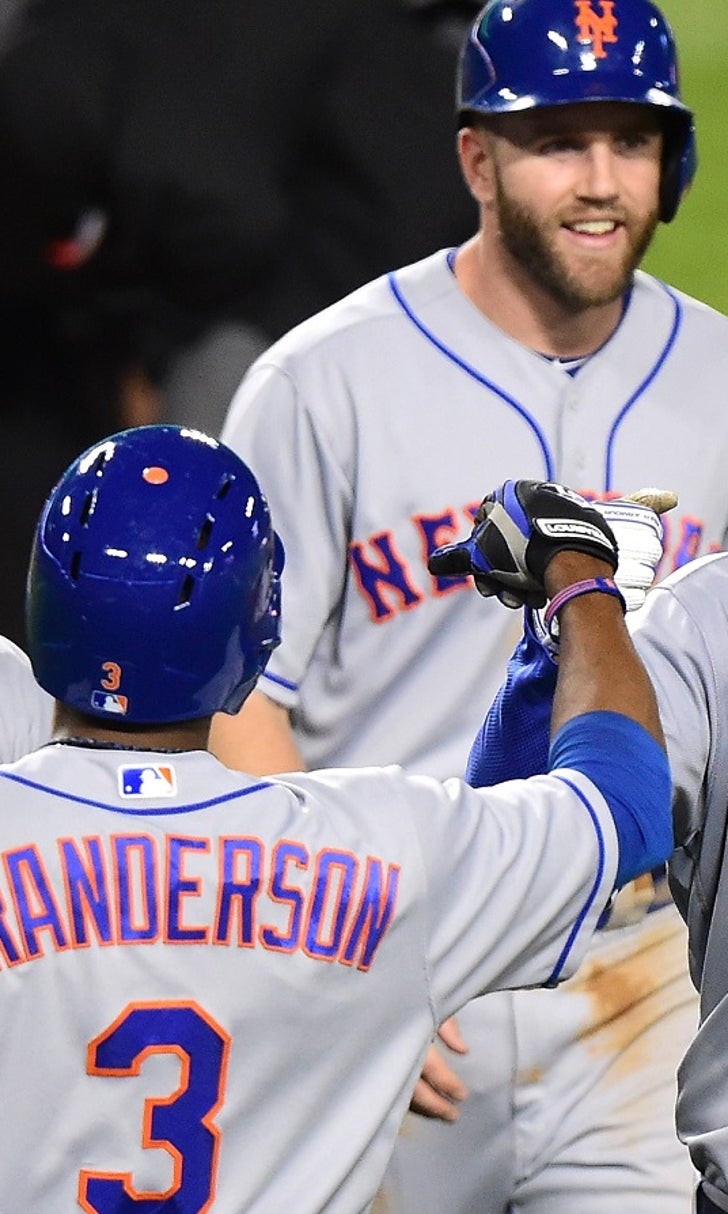 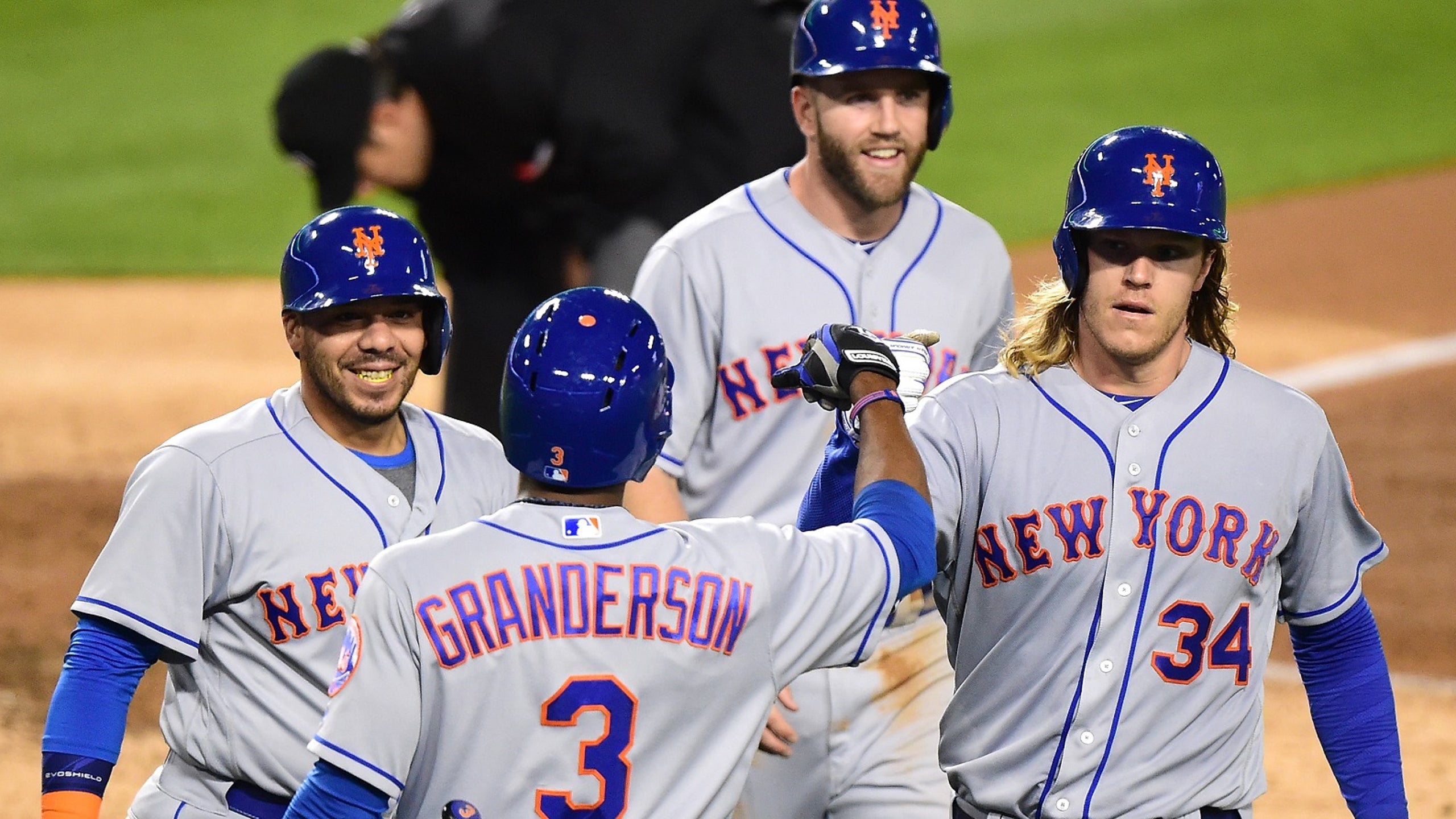 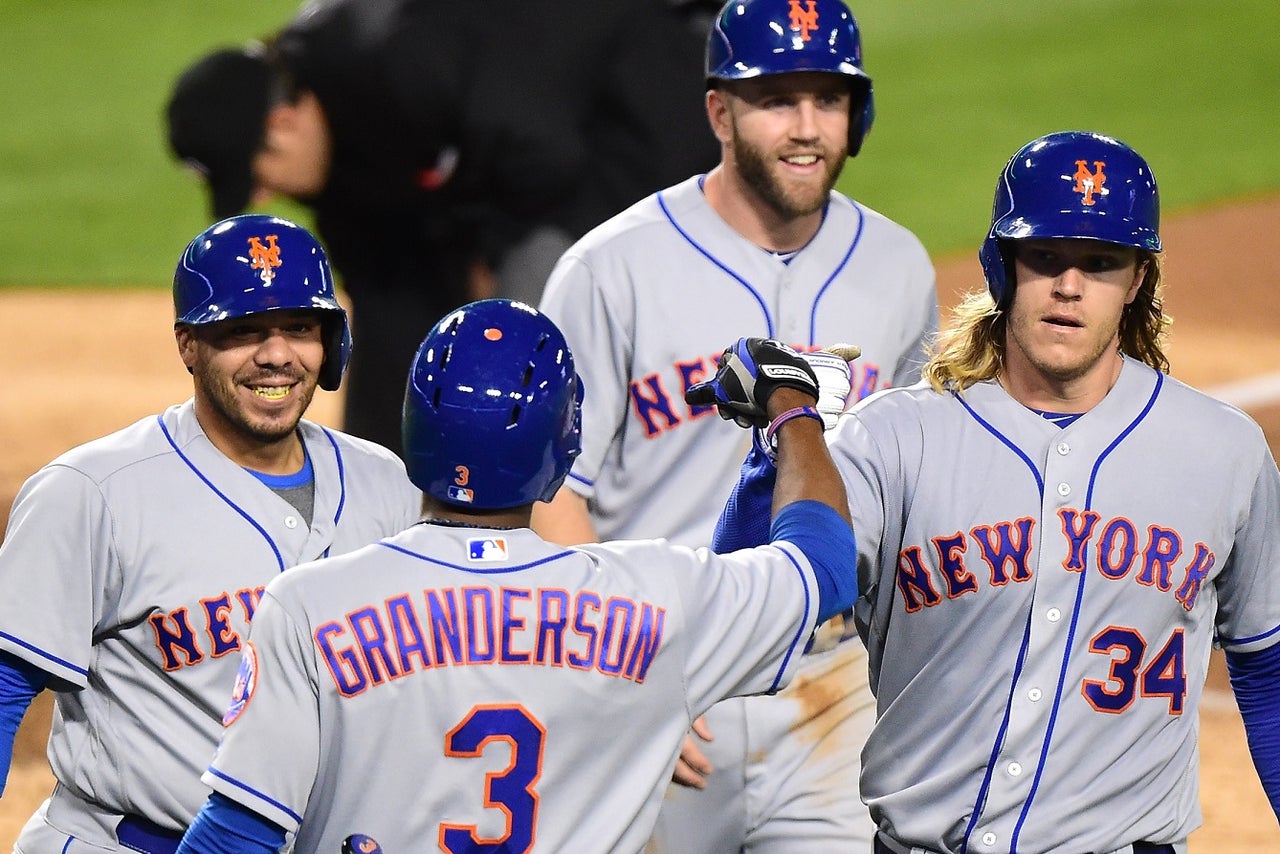 LOS ANGELES — Credit Thor with the victory on the mound and at the plate.

Noah Syndergaard became the second pitcher in Mets history to hit two home runs in a game on Wednesday night, driving in all of New York's runs in a 4-3 victory over the Los Angeles Dodgers.

Syndergaard (3-2) allowed two runs and six hits in eight innings, tying the longest outing of his career, struck out six and walked one. He gave up five hits in the first four innings and then retired 11 in a row.

"This guy holds his velocity," Dodgers manager Dave Roberts said. "He was throwing 99 mph in the eighth."

Nicknamed "Thor" after the Marvel Comics character known as the god of thunder who possesses an enchanted hammer, Syndergaard swung a mighty black bat with his blond locks flowing beneath his helmet. He had to provide all the offense himself after his teammates produced just one run in his previous two starts.

"I do think this does add to the nickname," he said.

Syndergaard hit a solo homer on the first pitch from Maeda (3-2) in the third inning, and slammed a three-run shot in the fifth. In that at-bat, Syndergaard tried unsuccessfully to bunt before manager Terry Collins gave him the sign to swing away.

Maeda had a stunned look on his face as he watched Syndergaard's second homer go out.

"He was in disbelief," Roberts said.

Dodgers shortstop Corey Seager marveled at the feat, too.

Syndergaard came up with a chance to tie Tobin's mark with the bases loaded in the sixth. Facing Chris Hatcher, he took big rips on his first three pitches, fouling off each of them. With Syndergaard behind 1-2 in the count, Hatcher and catcher Yasmani Grandal convened for a chat as though Barry Bonds was at the plate. Syndergaard struck out swinging on his next pitch to end the threat.

He also struck out swinging in the eighth, taking big cuts in the six-pitch at-bat.

Jeurys Familia gave up a run in the ninth, but earned his 12th save in as many chances to tie for the majors' saves lead.

Maeda gave up four runs and six hits in five innings, struck out three and walked two. He failed to pitch at least six innings for the first time in seven starts this season.

"He was using his breaking ball a lot and just didn't have that sharpness," Roberts said. "He was working behind hitters."

Syndergaard's power display gave the Mets 51 homers through their first 33 games to lead the majors. They've hit 49 in the last 25 games and also lead the majors with 35 homers on the road. Last Saturday, Mets pitcher Bartolo Colon hit the first home run of his career at age 42 in San Diego.

The Dodgers tied it at 1 in the third on Seager's homer. Grandal homered on Syndergaard's first pitch leading off the fourth for a 2-1 lead.

Mets: LHP Steven Matz will miss his next turn in the rotation Saturday at Colorado because his elbow has flared up. He plans to play catch Thursday and will see a doctor in New York when the team wraps up its West Coast trip. ... Walker returned to the lineup after missing three games with a sore right leg.

Dodgers: INF-OF Alex Guerrero played his second game at Class A Rancho Cucamonga as part of a rehab assignment. He's been on the DL with injuries to his left groin and left knee sustained in spring training.

Walker doubled in the sixth, snapping an 0-for-22 skid that tied the longest of his career.

Mets: RHP Bartolo Colon, fresh off hitting his first career home run at age 42 in San Diego, starts the series finale. He is 3-1 with a 2.82 ERA.

Dodgers: LHP Clayton Kershaw (4-1, 2.02) has allowed two earned runs in 16 innings over his previous two starts, struck out 24 and walked none.