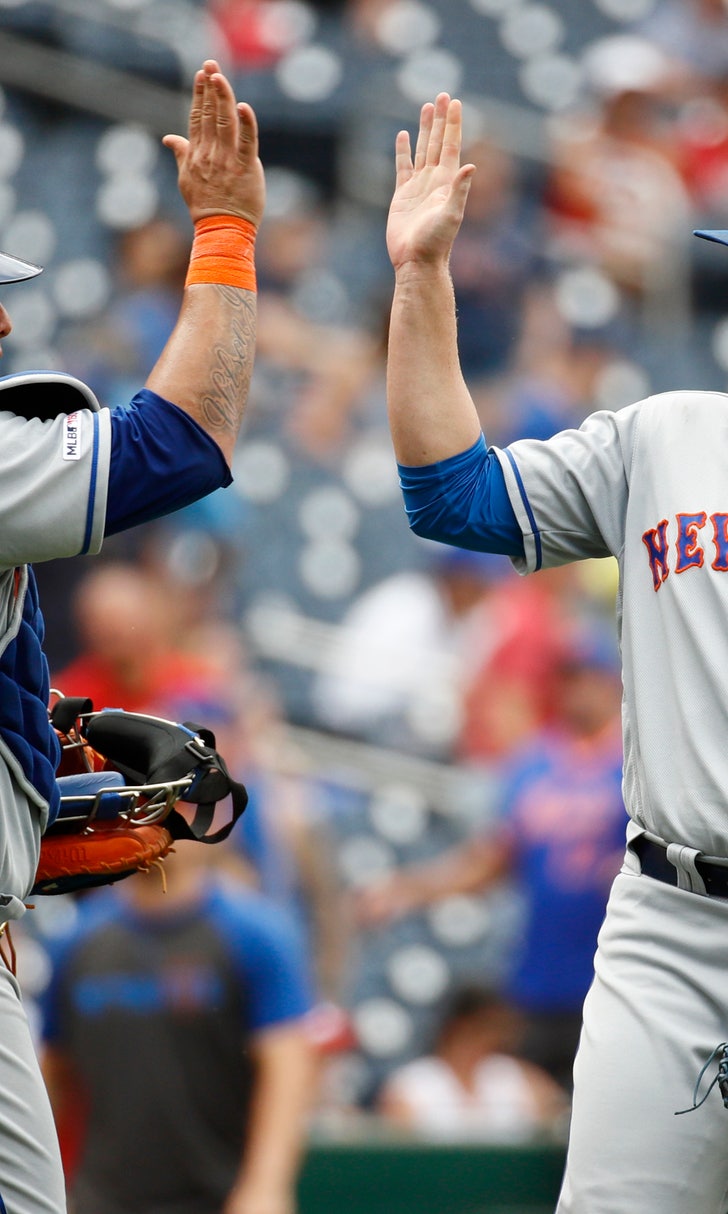 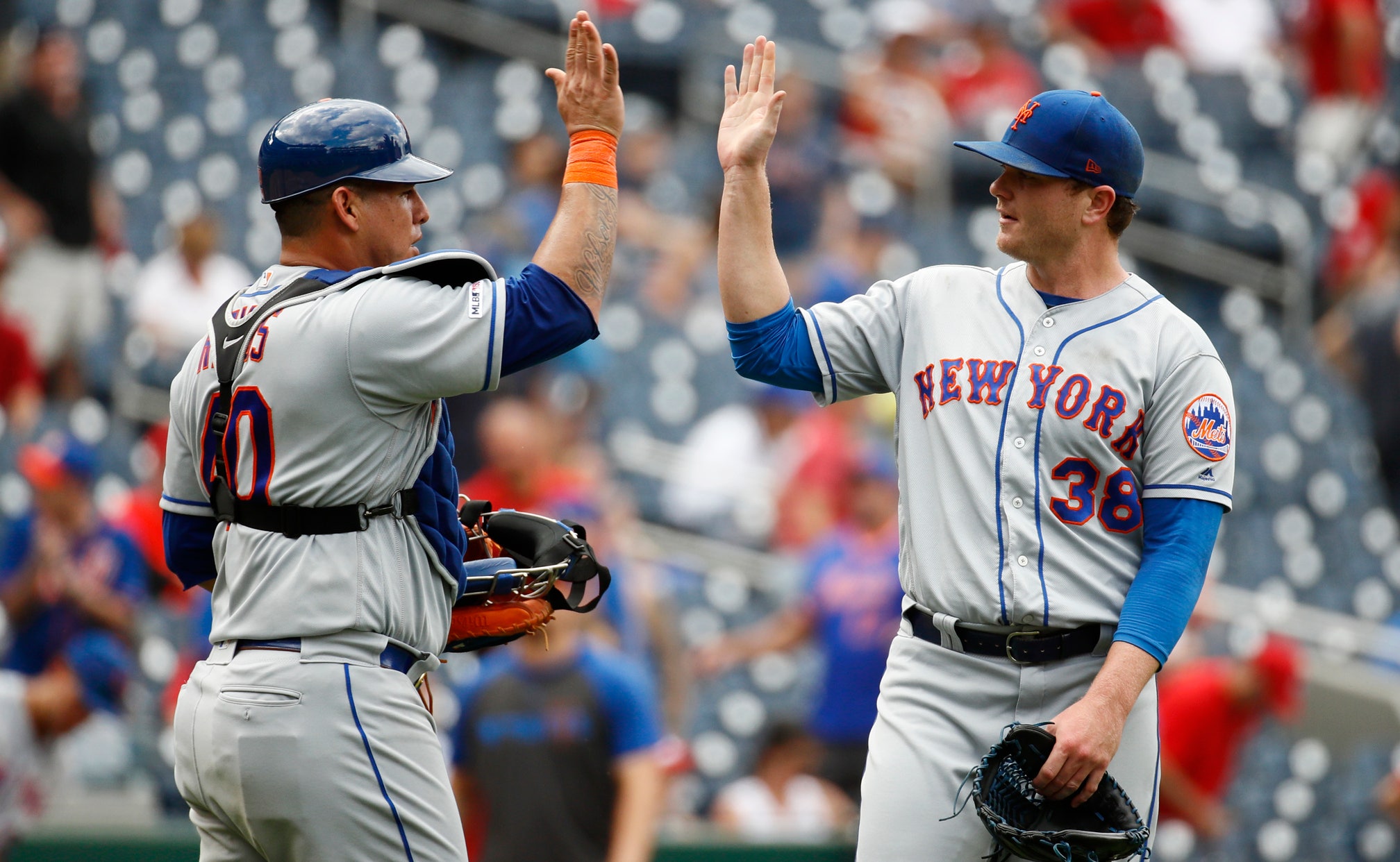 WASHINGTON (AP) — A night after a brutal loss, the New York Mets got back to doing what they have since the All-Star break: Winning another series.

Justin Wilson and the bullpen held on this time, rookie Pete Alonso hit his major league-leading 45th home run and the Mets rebounded to stop the Washington Nationals 8-4 Wednesday.

A day after a trio of Mets relievers was tagged for seven runs in the bottom of the ninth inning in an 11-10 loss to the Nationals, three pitchers combined to close with 3 1/3 scoreless innings.

"That was a tough loss last night," manager Mickey Callaway said. "They bounced back well. They came out swinging the bats. We did the job on the mound. That was a good win."

After Wilson issued a two-out walk to Kurt Suzuki — whose three-run homer won it Tuesday night — Victor Robles followed with an easy grounder to Amed Rosario. The shortstop tagged second base for the last out, then zipped a relay to first, as if to make sure the Mets really nailed it down.

The Nationals' lead atop the NL wild-card race was cut to three games over the idle Chicago Cubs. The Mets trail the Cubs by 4 ½ games.

New York's Wilson Ramos went 0 for 4, ending a 26-game hitting streak that tied for the second longest in club history. The slow-footed catcher was barely thrown out by second baseman Howie Kendrick on a grounder in the ninth.

"I went as hard as I can to get that single," Ramos said. "That was a great play by Kendrick. I'm excited and proud of what I did."

New York has won 12 of 16 series since the All-Star break. Washington dropped a series for the first time since Aug. 9-11 against the Mets. New York took eight of its last 10 against the Nationals and won the season series 12-7.

"It was just one of those things," Nationals manager Dave Martinez said. "I think they scored six or seven or eight more runs than us during the course of the (season) series. Their pitching's good. Our pitching's good. I think we match up well. They got the better hand on us but, hey, we move on."

The Mets went 4-2 on their road trip, taking two of three from both Philadelphia and Washington.

"This was a really awesome road trip for us," said Alonso, who connected for the second straight day and broke a tie with Mike Trout of the Angels and Cody Bellinger for the big league homer lead. "Taking two series on the road against really tough, in-division teams, it says a lot about this club. We're going to keep on pushing forward."

Robinson Cano hit a two-run shot in his first game in a month after being sidelined by a torn left hamstring. Juan Lagares also homered for the Mets, who took a 7-1 lead in the sixth.

Zack Wheeler (10-7) earned his first victory since Aug. 6. He needed 101 pitches to complete five innings, but allowed just one run.

The Nationals scored three off reliever Jeurys Familia in the sixth to close within 7-4, with Anthony Rendon hitting a two-run double. Luis Avilan, who was part of the ninth-inning collapse the previous night, finished the sixth, Seth Lugo pitched two scoreless innings and Wilson handled the ninth.

The Mets tagged Anibal Sanchez for seven runs in five-plus innings. Sanchez (8-7) lost for the first time since May 10, a span of 17 starts.

Nationals: OF Juan Soto was scheduled to get X-rays after getting hit on his elbow with a pitch Tuesday. Soto, who stayed in the game and later hit a home run while wearing an elbow protector, was in Wednesday's lineup and went 1 for 4. ... RHP Austen Williams (sprained AC joint) was transferred to the 60-day injured list.

Washington selected the contract of RHP Aaron Barrett from Double-A Harrisburg, completing the reliever's comeback from Tommy John surgery in 2015 and a fractured right arm in 2016. Barrett did not pitch in the minors in 2016 or 2017, then made 20 appearance for Class A Auburn last year. He was 0-2 with a 2.75 ERA and 31 saves for Harrisburg this season.

"I just found it within myself to keep pushing forward," said Barrett, who last pitched in the majors on Aug. 5, 2015. "I said it all along: When I make it back, it's going to be a hell of a comeback story. I'm pretty overwhelmed that I'm here, to be honest with you. It's crazy."

Mets: New York has Thursday off before starting a 10-game homestand. LHP Steven Matz (9-8, 4.04 ERA) will start the opener of a three-game series against Philadelphia on Friday.

Nationals: RHP Stephen Strasburg (16-5, 3.47) gets the nod as Washington begins a four-game series at NL East leader Atlanta. Strasburg is 4-1 with a 3.21 ERA in five career starts at SunTrust Park.