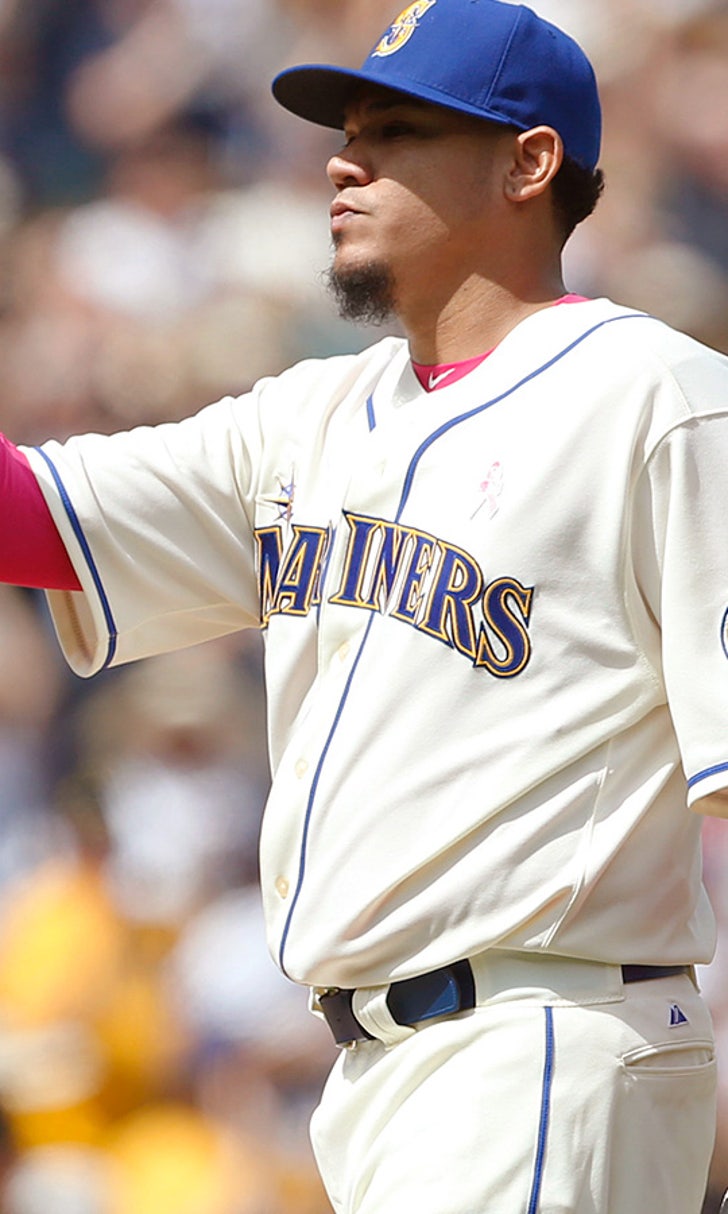 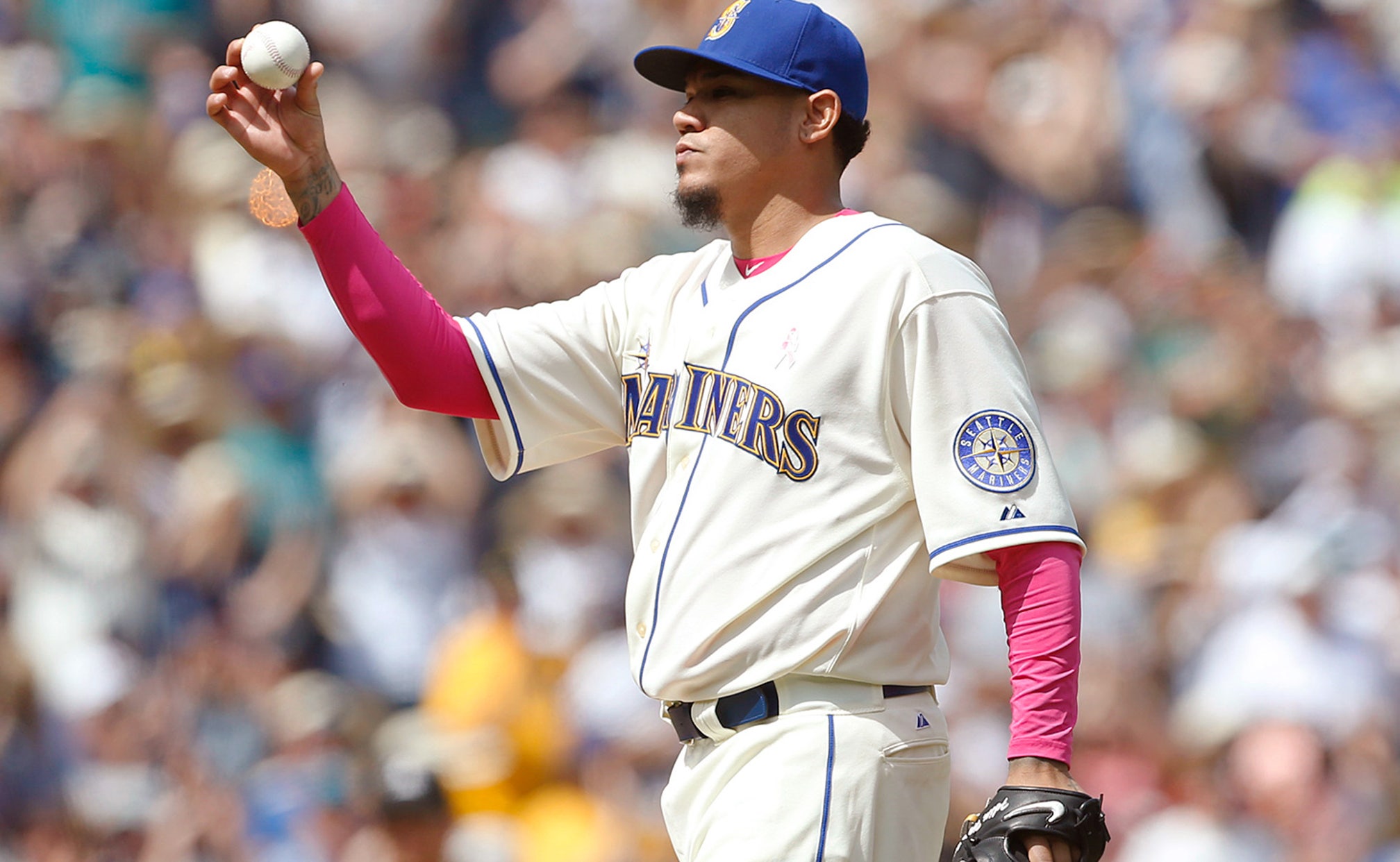 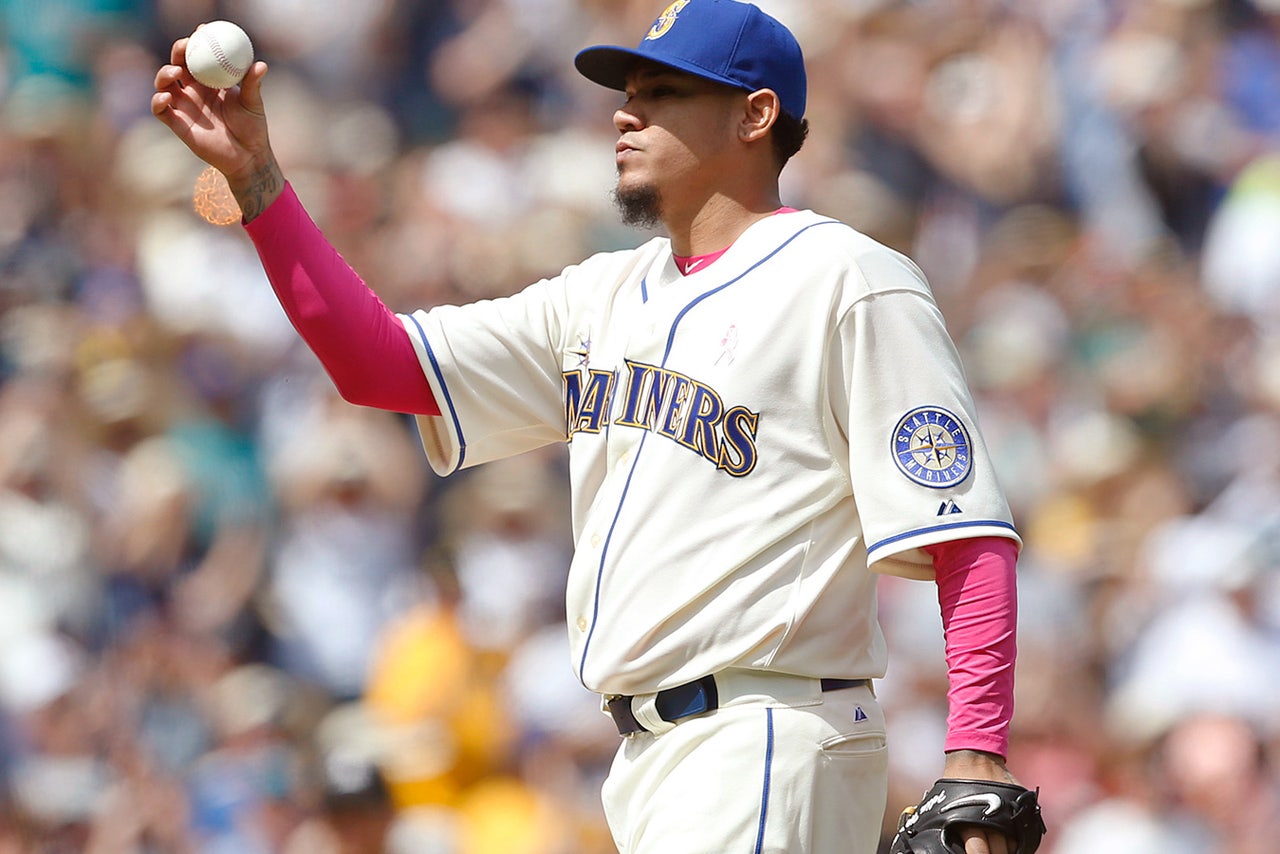 As soon as strike three was called, everyone in Safeco Field knew it was a special moment.

Felix Hernandez became the fourth-youngest player to reach 2,000 strikeouts in a 4-3 win against the Oakland Athletics on Sunday with a fifth-inning strikeout of leadoff hitter Sam Fuld.

Hernandez started Sunday's game against the Oakland Athletics with 1,995 strikeouts. He fell behind Fuld 3-1 before striking him out looking at a fastball for No. 2,000. As the accomplishment was noted on the stadium video board, the fans rose for a standing ovation and Hernandez stepped off the mound to acknowledge the moment.

"The accolades just keep coming and coming with this guy," Seattle manager Lloyd McClendon said. "He's a delight to watch every fifth day. I think we're all blessed. I'm not sure everybody realizes what's he's actually doing, but this guy's real, real good."

Only Bert Blyleven, Sam McDowell and Walter Johnson, who were all 28 when they struck out 2,000, reached the milestone at a younger age than Hernandez at 29 years, 32 days old.

Although Hernandez said he wasn't concentrating on the mark coming into the game, once he got Josh Reddick swinging to end the third inning it was in his mind.

"I knew it. I knew I had four, and I needed five," Hernandez said. "It was a pretty special moment."

Hernandez (6-0) added one more strikeout on his final batter, getting Eric Sogard swinging to end the seventh inning. Nearly everything went right for him today except for two solo home runs by Marcus Semien, the first multi-homer game of his career.

"It's Felix Hernandez -- he's going to do that to a lot of teams this year," said Oakland catcher Stephen Vogt, who hit a solo homer off Seattle closer Fernando Rodney in the ninth inning. "He's a competitor too. Both times right after he gave up home runs to Semien, you could see his demeanor change, bear down and get nastier. That's what good competitive pitchers do. When they get mad they get better."

"Anytime you can get a lead like that with (Hernandez) on the mound he can settle in and do his thing, and he did," Ackley said. "It seems like every now he pitches he's setting a milestone. It's pretty cool to watch. I've been here with him for the perfect game and all these things, and it just keeps getting better and better."

Athletics: OF Coco Crisp, who came off the disabled list on Wednesday after recovering from right elbow surgery, was out of the lineup Sunday, although he came on as a pinch-hitter and ended the game with a strikeout in the ninth inning. A's manager Bob Melvin said Crisp, who has started three of five games since returning, is ready to play regularly starting Monday. ... LHP Sean Nolin (sports hernia surgery) threw two innings in a rehab assignment at Triple-A Nashville on Saturday. He'll next have a rehab start, and Melvin said Nolin could be used in the rotation or out of the bullpen when he's activated.

Mariners: Chris Taylor was originally listed as the starting shortstop, but was scratched for Brad Miller before the game. McClendon said Taylor's right hand was stepped on during Saturday's game and he had an X-ray Sunday morning. "He's going to be OK," McClendon said. "It's a little bruise. It scared him more than anything."

The last time a player had two home runs in a game off Hernandez was Gordon Beckham for the Chicago White Sox on June 1, 2012.