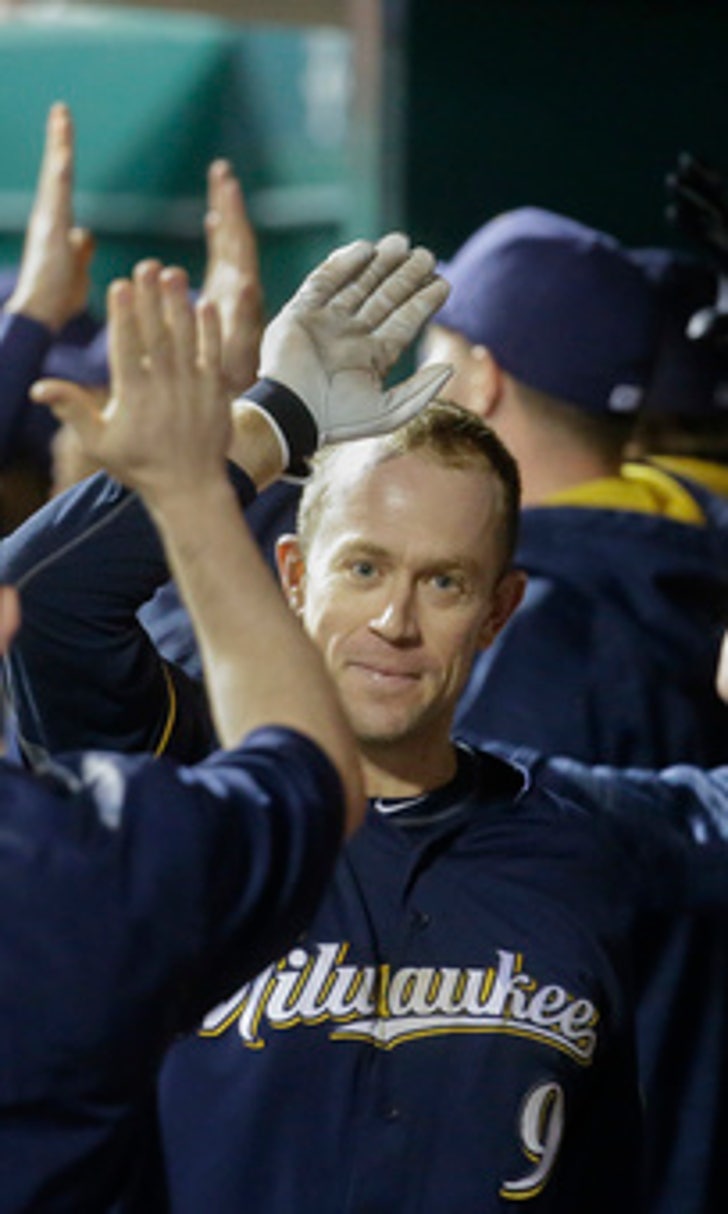 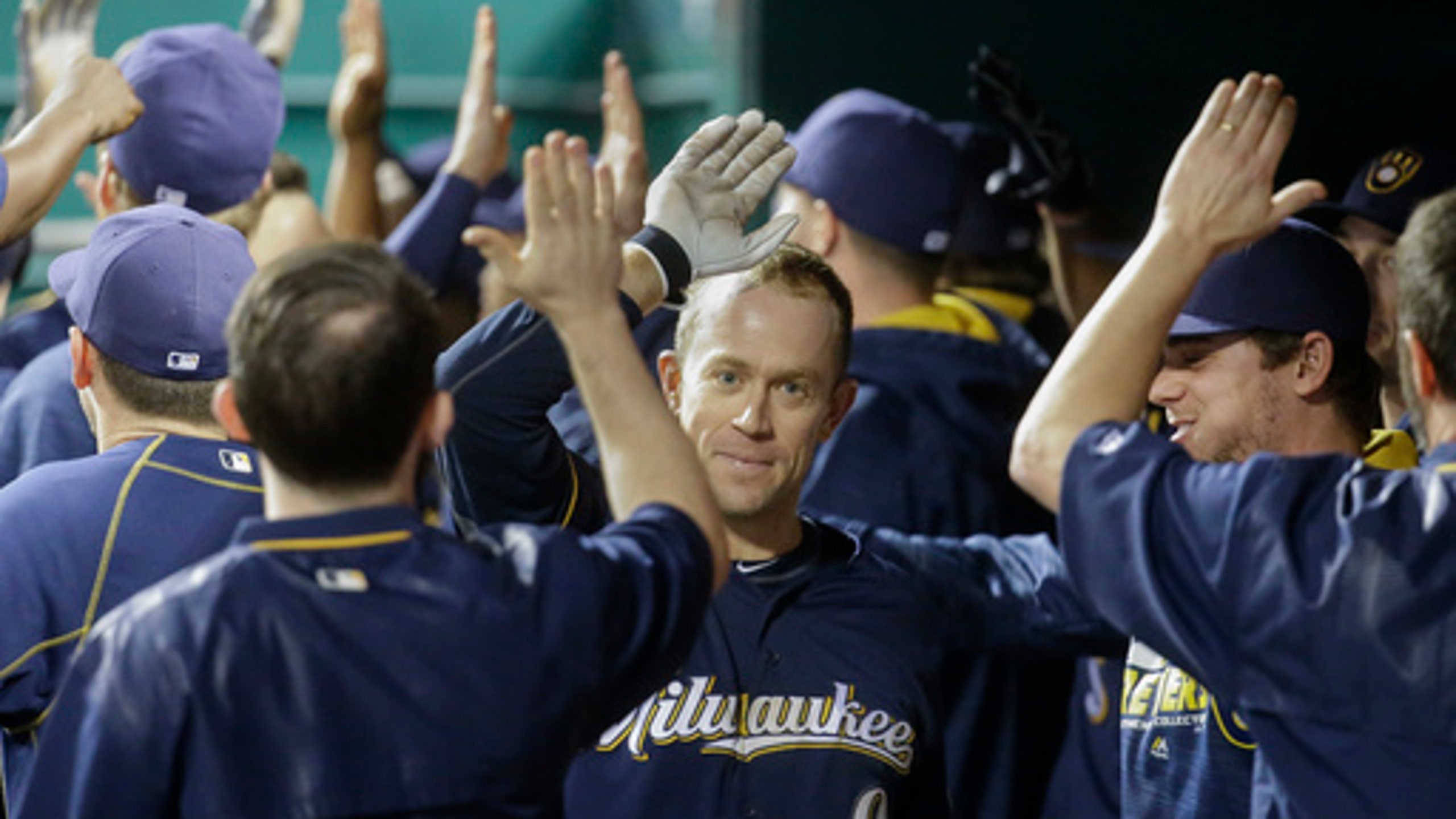 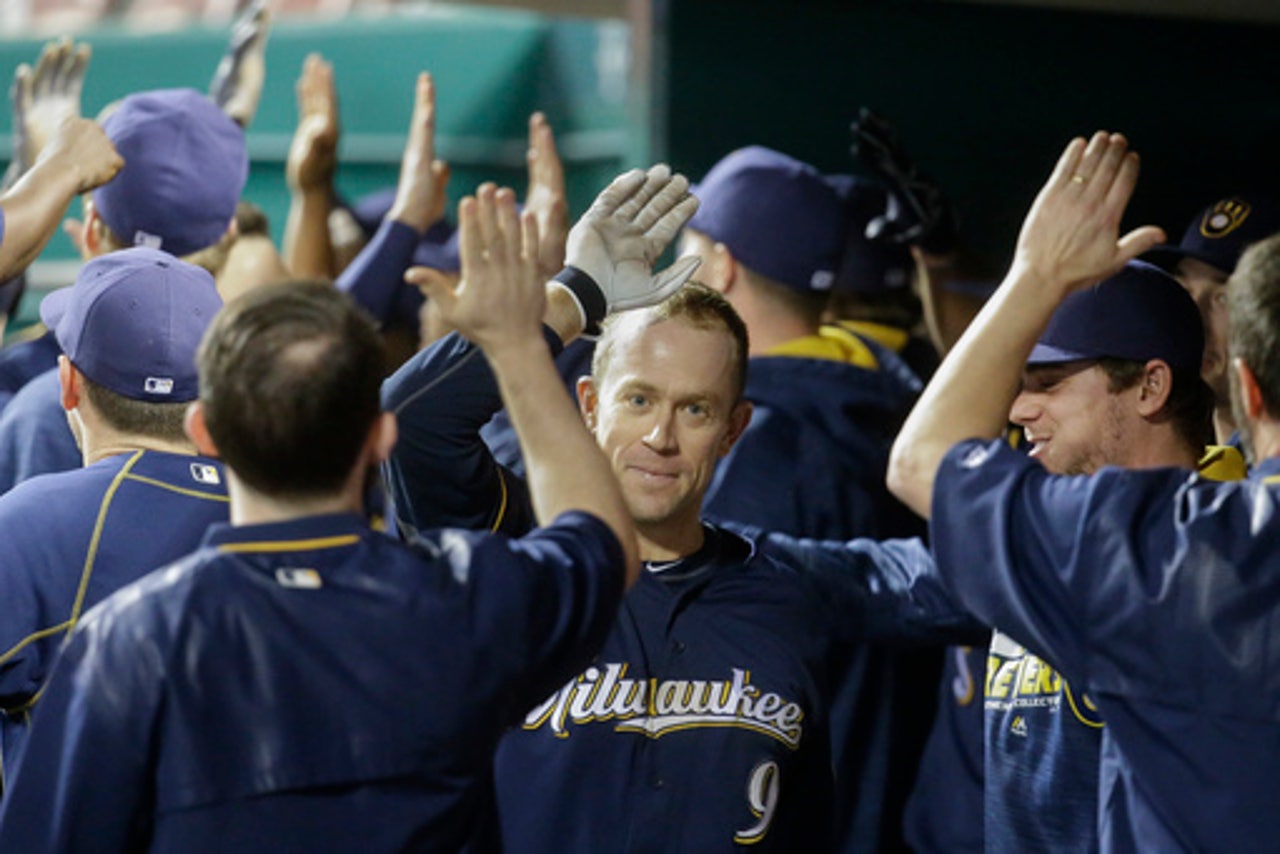 CINCINNATI (AP) Aaron Hill finally got the results he was looking for on Saturday night. Big time.

Hill hit a grand slam in Milwaukee's seven-run 10th inning for his third homer of the game, and the Brewers snapped a three-game losing streak with a 13-7 win over the Cincinnati Reds.

Hill belted a two-run shot in the sixth and a tying solo shot in the eighth, helping Milwaukee erase a 6-2 deficit. The second baseman set career highs and matched franchise records with the three homers and seven RBIs.

He hit six homers in 116 games with Arizona last season.

''We've been working hard,'' said Hill, who extended his hitting streak to eight games. ''I've been happy with my at-bats even when the results weren't there. Coming off the bench last year, I had to find a way to simplify things.''

Pinch hitter Jonathan Villar added a two-run double in the 10th as the Brewers snapped the Reds' three-game win streak.

Jeremy Jeffress (1-0) got the win by pitching a scoreless ninth. Caleb Cotham (0-2) failed to record an out in the 10th and was charged with five runs and five hits, including Hill's second career grand slam.

''We chipped away or Aaron chipped away,'' Milwaukee manager Craig Counsell said. ''I thought if we could get to the 10th with (Ryan) Braun and (Jonathan) Lucroy coming up, we had a chance.''

''I can't go to the well every day with the same guys,'' Reds manager Bryan Price said. ''I didn't want to use Cotham, but I wanted to take one shot with him. It didn't work out.''

Phillips' drive to left field in the third inning gave the Reds a 4-0 lead. He also homered in the 10th.

Finnegan helped himself with a second-inning RBI single, but he served up leadoff homers by Braun in the fourth and Lucroy in the sixth before Hill's two-run shot knocked him out of the game.

Hamilton got the Reds off to a fast start in the first. He walked and stole second with one out. He swiped an uncovered third base with two outs, jumping up and scoring when catcher Lucroy's throw was mishandled by late-arriving third baseman Hernan Perez.

Hamilton, running on the pitch, also scored from first base on Joey Votto's single to left-center field in the fifth.

Votto and Phillips made their 1,000th career start together with the Reds, most by any set of active infielders. They were part of a Cincinnati starting lineup and batting order that, except for the pitcher, was the same for a season-high third consecutive game.

Finnegan's second-inning RBI single snapped a stretch of 36 consecutive hitless at bats by Reds pitchers, their longest since they were 0 for 40 from July 20 to Aug. 11, 2010.

Braun's home run was the 31st of his career against the Reds, more than any player in the major leagues since his debut in 2007. It was his 19th at Great American Ball Park, more than he has hit at any other ballpark except Miller Field.

The Reds announced after the game that outfielder Scott Schebler was being optioned to Triple-A Louisville and they planned to promote outfielder Kyle Waldrop before Sunday's game.

Brewers: OF Domingo Santana was scratched with shoulder tightness that had kept him out of four of the Brewers' five previous games.

Reds: RHP Jon Moscot was placed on the 15-day disabled list, retroactive to Tuesday, with soreness in the surgically repaired left shoulder he dislocated last season.

Brewers: RHP Junior Guerra (1-0) is scheduled to make his second start of the season in Sunday's finale of the four-game series in Cincinnati. Guerra got the win in his first major league start on Tuesday against the Angels.

Reds: LHP John Lamb (0-0) is scheduled to make his second start of the season and third career appearance against Milwaukee. Lamb compiled a 6.17 ERA in two starts last season against the Brewers.

Sports World Mourns Hank Aaron
The Hall of Famer died Friday at the age of 86. Fans, athletes, analysts and more remember a legend on and off the field.
13 hours ago