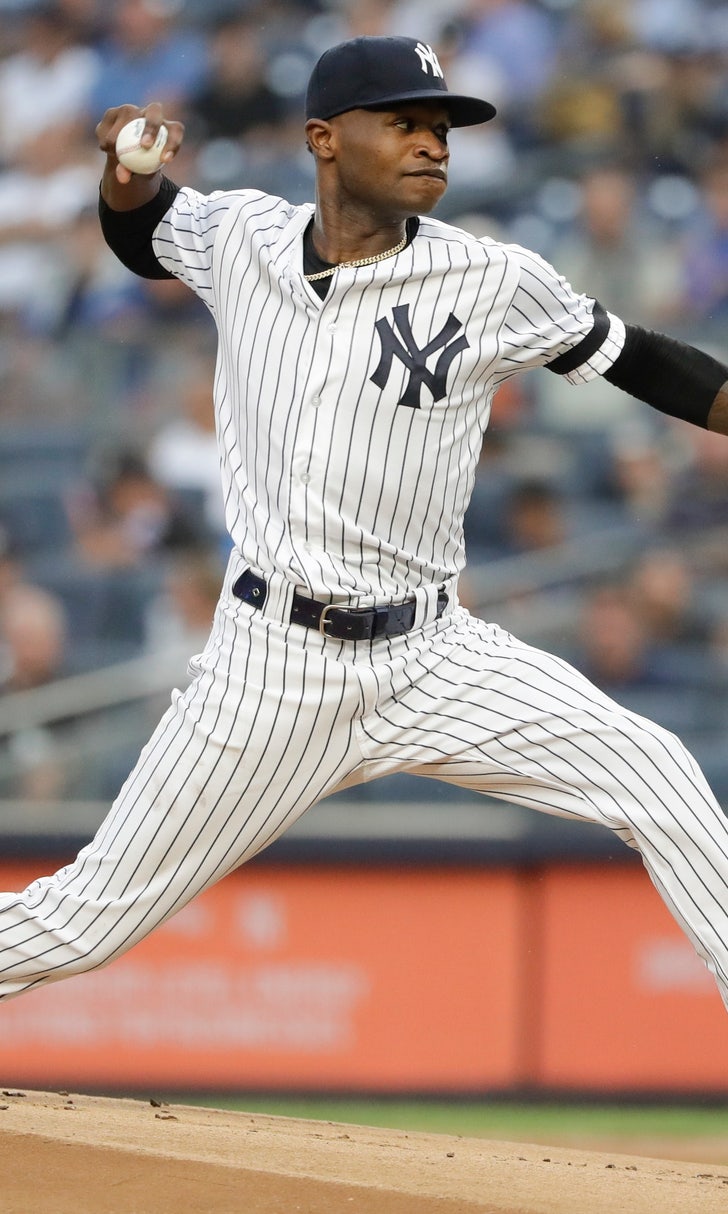 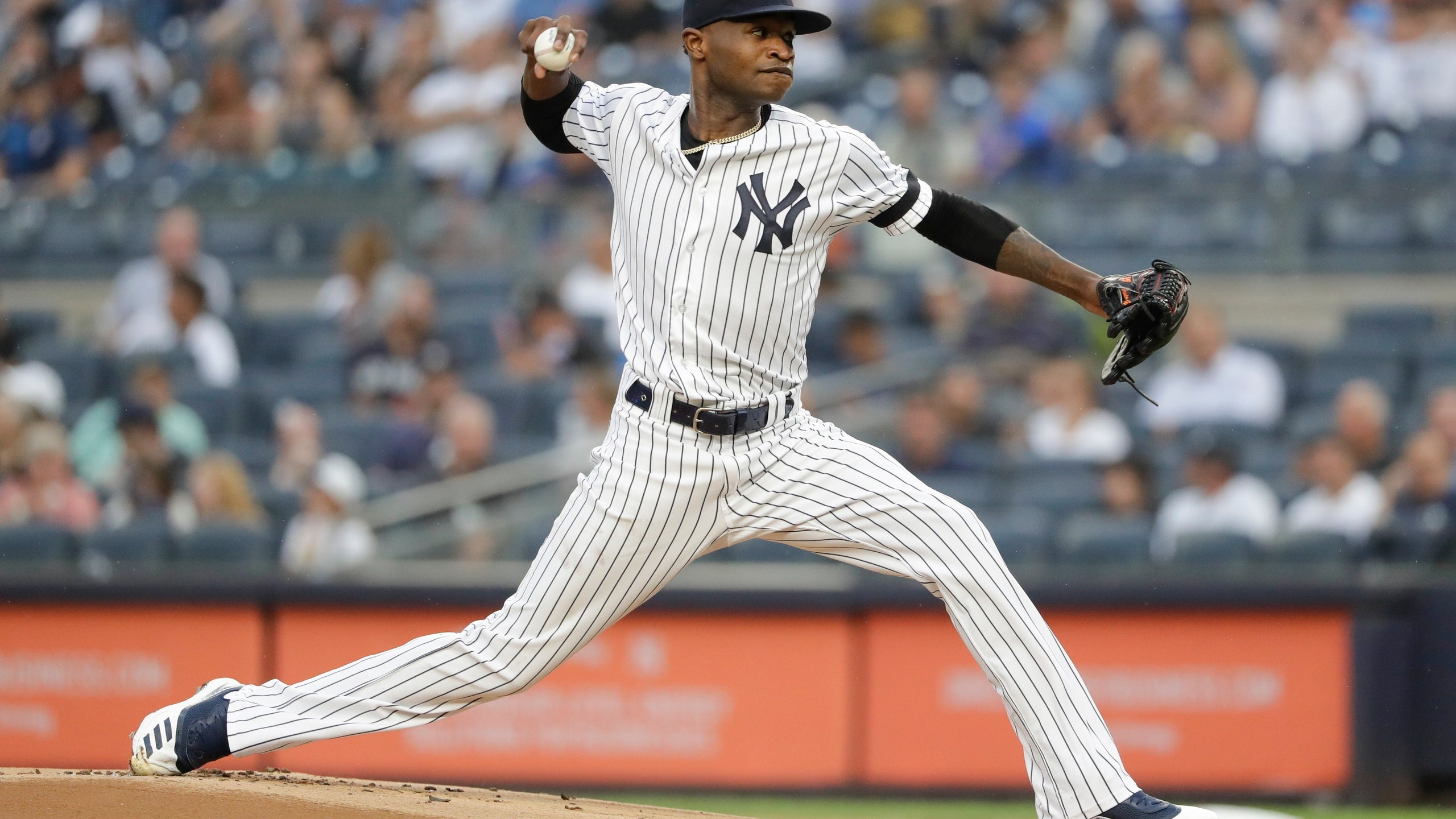 NEW YORK (AP) — From the outset, there was something different about Domingo Germán. His fastball zipped a little more, setting up an effective curveball and the Yankees got what they needed from their unexpected ace.

German pitched seven strong innings to become the first 16-game winner in the majors and New York beat Baltimore 8-3 on Tuesday night, running their winning streak over the Orioles to 15 games.

He allowed two runs, five hits, struck out seven, walked one and won his career-high seventh straight decision. He did so with a four-seam fastball that averaged 93.3 miles per hour and topped out at 96, up from the 88.4 mph he averaged Thursday in Toronto.

"It definitely felt a little firmer when it was coming in," Yankees catcher Austin Romine said of German's fastball. "It definitely had some more life to it."

When he was not throwing fastballs, German kept Baltimore off-balance by throwing 37 curveballs. He generated 14 of his 21 swings on misses on his curveball that averaged 82.1 mph.

"You could just see the finish on his breaking ball and a little more life on his fastball too," Yankees manager Aaron Boone said.

Germán pitched seven innings for the fourth time on a night in which the Yankees deployed a 10-man bullpen in the hopes of not using key bullpen arms Adam Ottavino, Zack Britton and Aroldis Chapman after Monday's doubleheader. He raised his winning percent to a major league-best .889, the second-highest of any Yankee with at least 15 decisions behind Ron Guidry .893 mark in his 25-3 season in 1978.

"We wanted to be economical out there understanding how much the bullpen has been used in the past couple of games," Germán said through a translator.

Germán raised his innings total to 116 and while there could be an innings limit at some point, the Yankees are not ready to discuss it for someone who began the season in the rotation as a replacement for Luis Severino.

"Not yet," Boone said when asked at what point the Yankees have to impose an innings limit.

DJ LeMahieu homered on the first pitch he saw to get the Yankees going. Aaron Judge added a two-run double on the third anniversary of his major league debut in New York's four-run fourth.

Gio Urshela had three more hits, including an RBI single in the fourth. Cameron Maybin had a two-run single in the second while Gary Sánchez and Mike Tauchman added RBI doubles as the Yankees totaled 15 hits.

The Yankees are on their longest winning single-season winning streak against one opponent since beating the 103-loss Philadelphia Athletics 15 in a row in 1954. They improved to 16-2 against Baltimore with one game left, won for the 13th time in 15 games overall and moved a season-high 39 games over .500 at 80-41.

LeMahieu hit his seventh career leadoff homer and fifth this season when he clobbered a fastball from John Means (8-8) and sent it into the left-center field bleachers. The 446-foot blast was New York's 60th against Baltimore. The Orioles have allowed an AL-record 249 homers — nine short of the record set by Cincinnati in 2016.

Maybin's single through a drawn-in infield made it 3-0 and Judge knocked out Means with a double to the left-field corner for a 5-1 lead.

Baltimore called up RHP Chandler Shepherd from Triple-A Norfolk, optioning fellow reliever RHP Brandon Kline to make room. Shephard made his major league debut and became the 36th pitcher used by the Orioles this year. ... RHP Adonis Rosa had his contract purchased from Triple-A Scranton/Wilkes Barre and pitched the final two innings. LHP Joe Mantiply was designated for assignment after getting the win in the second game of Monday's doubleheader.

Orioles: OF DJ Stewart (concussion) will play rehab games with Triple-A Norfolk Wednesday and Thursday before being activated Friday in Boston.

Yankees: LHP CC Sabathia (inflamed right knee) threw a second bullpen Tuesday and will likely start against Cleveland this weekend. . OF Giancarlo Stanton (sprained right knee) continued running on a treadmill and is up to 75 or 85 percent, according to manager Aaron Boone. Boone said Stanton is getting closer to being on the field for workouts. . RHP Jonathan Loaisiga (right shoulder strain) was activated off the injured list after missing three months.

Inside The Trading Card Boom
Once a way for children to show off their fandom, the sports card collecting space is going through a mega-boom, Martin Rogers writers.
9 hours ago

How MLB Win Totals Are Made
Predicting how many games MLB teams will win isn't as simple as plugging data into a computer. Sammy P explains it all.
17 hours ago

The Face Of Baseball
The Padres were wise to bet on rising superstar Fernando Tatis Jr. for the next 14 years, Ben Verlander writes.
February 18
those were the latest stories
Want to see more?
View All Stories
Fox Sports™ and © 2021 Fox Media LLC and Fox Sports Interactive Media, LLC. All rights reserved. Use of this website (including any and all parts and components) constitutes your acceptance of these Terms of Use and Updated Privacy Policy. Advertising Choices. Do Not Sell my Personal Info