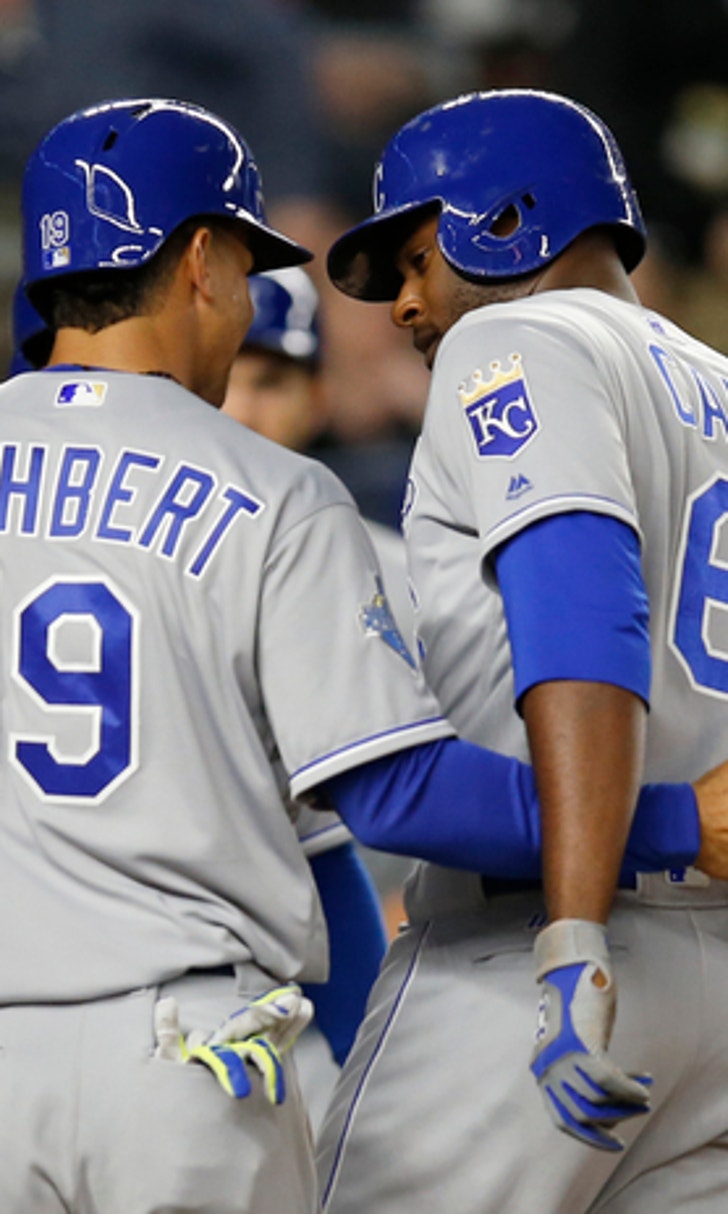 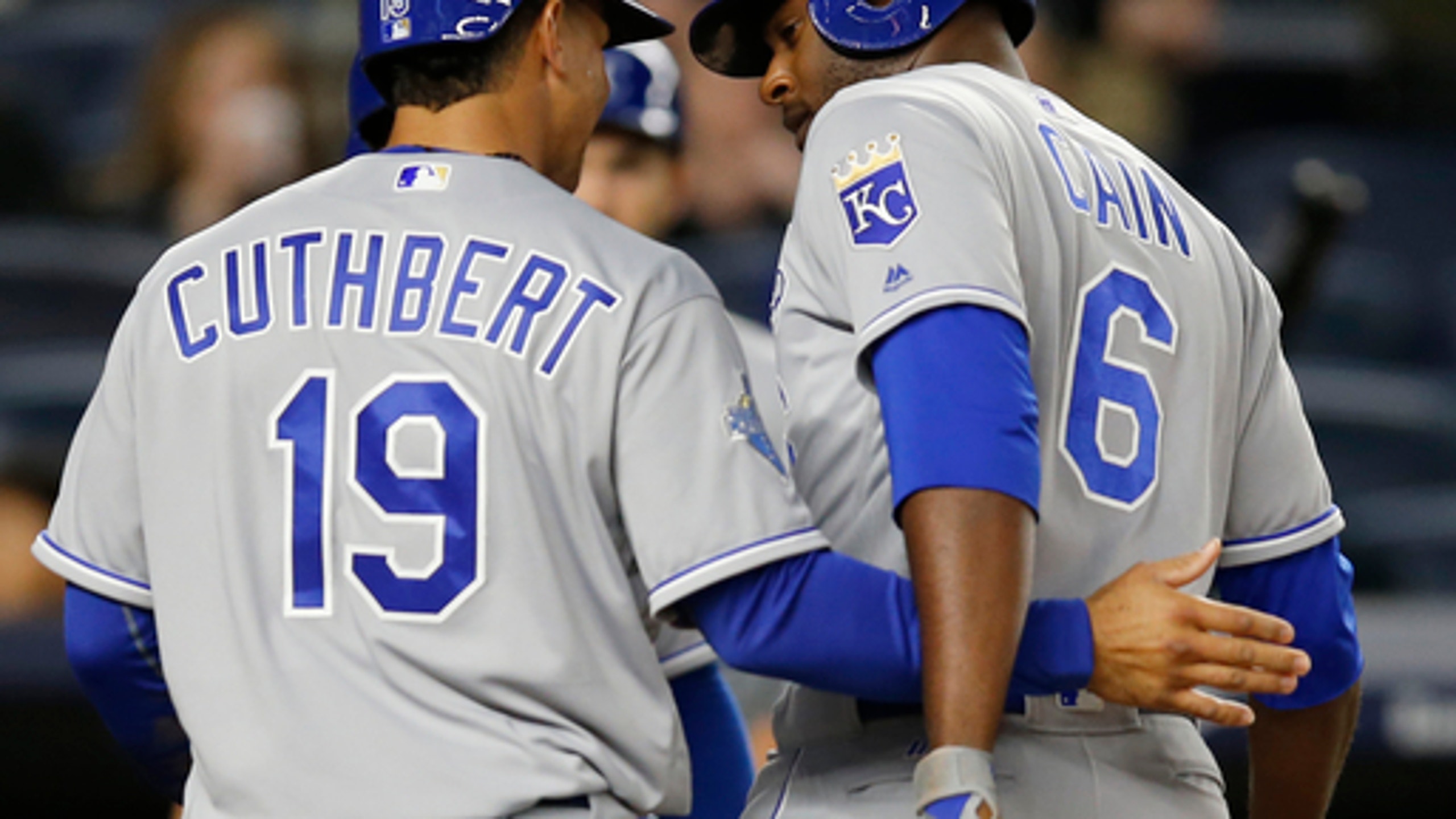 Chapman gets 1st Yankees save as NY overcomes Cain's 3 HRs 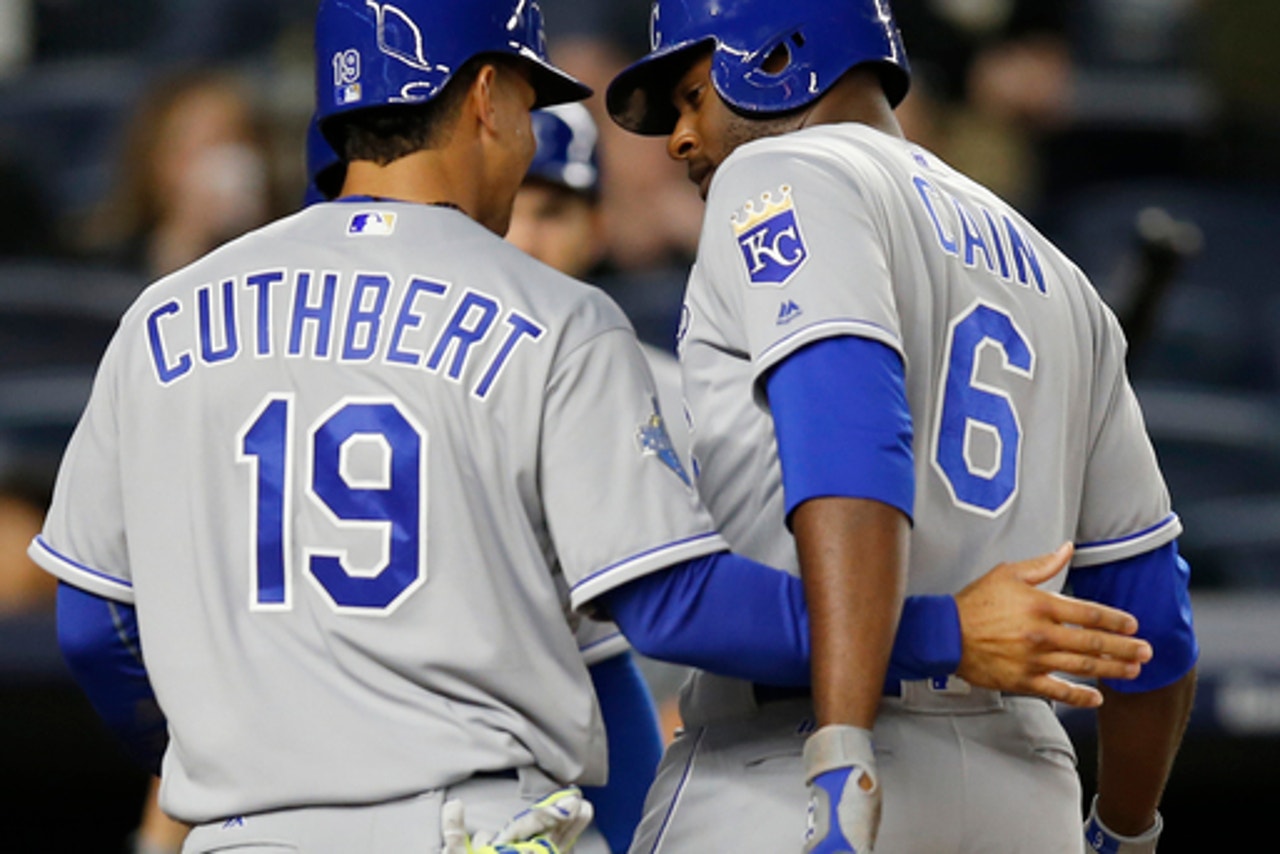 NEW YORK (AP) When Aroldis Chapman takes the mound at his new home, the Yankee Stadium scoreboard spells his name in animated flames.

Chapman got his first save for New York, capping a back-and-forth 10-7 win over the Kansas City Royals on Tuesday night as the Yankees overcame three home runs and five RBIs from Lorenzo Cain.

''We would have lost 7-0 a couple of weeks ago,'' said Brett Gardner, who doubled home the tiebreaking run off Kelvin Herrera (0-1) in a three-run eighth inning.

Chapman, who returned from a 29-game domestic violence suspension on Monday, worked around a walk in a hitless ninth for his first Yankees save, retiring Cain on a game-ending popup. Twelve of his 21 pitches were at least 100 mph, making it 19 of 38 in two appearances.

''I'd pay a ticket to watch that,'' said Yankees catcher Brian McCann, who added a two-run double off the fence in right-center later in the eighth.

Chapman reached a peak velocity of 102.1 mph on Cheslor Cuthbert's leadoff groundout. Fans' energy increased throughout the ninth as they turned toward the scoreboard seeking the velocity of every pitch.

Ackley scored two runs and drove in two, Hicks had two hits and an RBI, and the speedy Gamel scored the go-ahead run on Gardner's hit after reaching when Gold Glove shortstop Alcides Escobar allowed his one-out grounder to bounce out of his glove for an error.

''This is the first time that we've battled back through a game a couple different times,'' McCann said. ''Guys had some quality at-bats and huge moments, and we really haven't done that all year.''

New York is 13-3 when scoring three or more runs - and 0-15 when scoring two or fewer. With 28 runs in the first five games of a 10-game homestand, the Yankees' offense is starting to revive.

''Maybe it's the weather heating up. It's not raining on us,'' manager Joe Girardi said. ''All of a sudden I think we're swinging the bats like we're capable of.''

Still, the last-place Yankees are six games off the AL East lead. The immediate goal is to get back to .500.

''That's your first step,'' Girardi said. ''More than that, I think it's winning series that's important. And if you win series, that will all take care of itself.''

World Series champion Kansas City has lost 11 of 14, dropping two games under .500 at 15-17. The Royals rallied from deficits of 1-0, 5-3 and 7-6 as Cain tied his career high with five RBIs. Cuthbert also homered for the Royals, who have hit six home runs in the first two games of the series.

''We're just not getting many breaks right now, but you make your own breaks,'' manager Ned Yost said. ''Not anything good happening for us for the most part.''

Cain hit a solo homer in the third and a three-run drive in the fifth, both off Masahiro Tanaka, who did not have a sharp slider. Cain added a tying homer off Andrew Miller (2-0) leading off the eighth and became the seventh Royals player to hit three homers in a regular-season game. George Brett and John Mayberry did it twice, and Brett also accomplished the feat against the Yankees in the 1978 AL Championship Series.

Miller allowed a run for the first time this season.

In his first start against the Royals, the only AL opponent he had not faced, Tanaka matched career highs by allowing six earned runs and three homers in seven innings. ''If you look back at some of the previous games, I think I got away with some mistakes, but that wasn't the case today,'' he said through a translator.

Yankees: Teixeira wasn't sure whether he could play Wednesday.

Michael Pineda (1-3) starts for the Yankees on Wednesday night against Yordano Ventura (2-2). Pineda is winless in five starts.