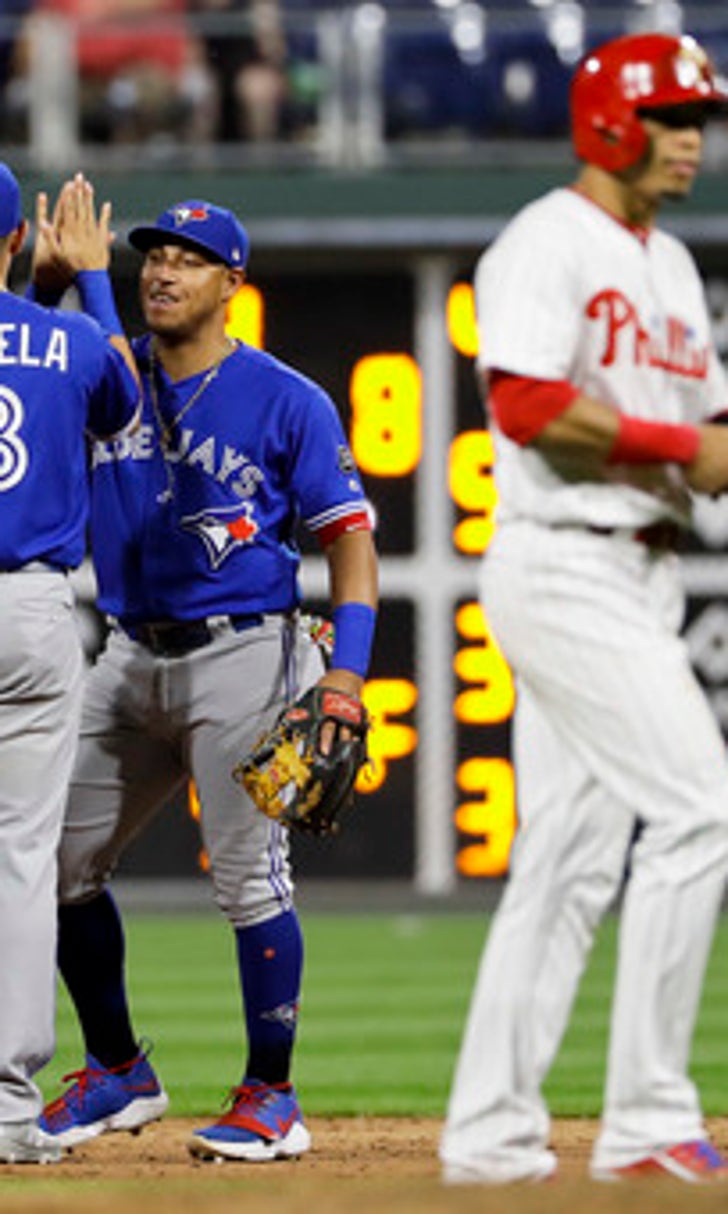 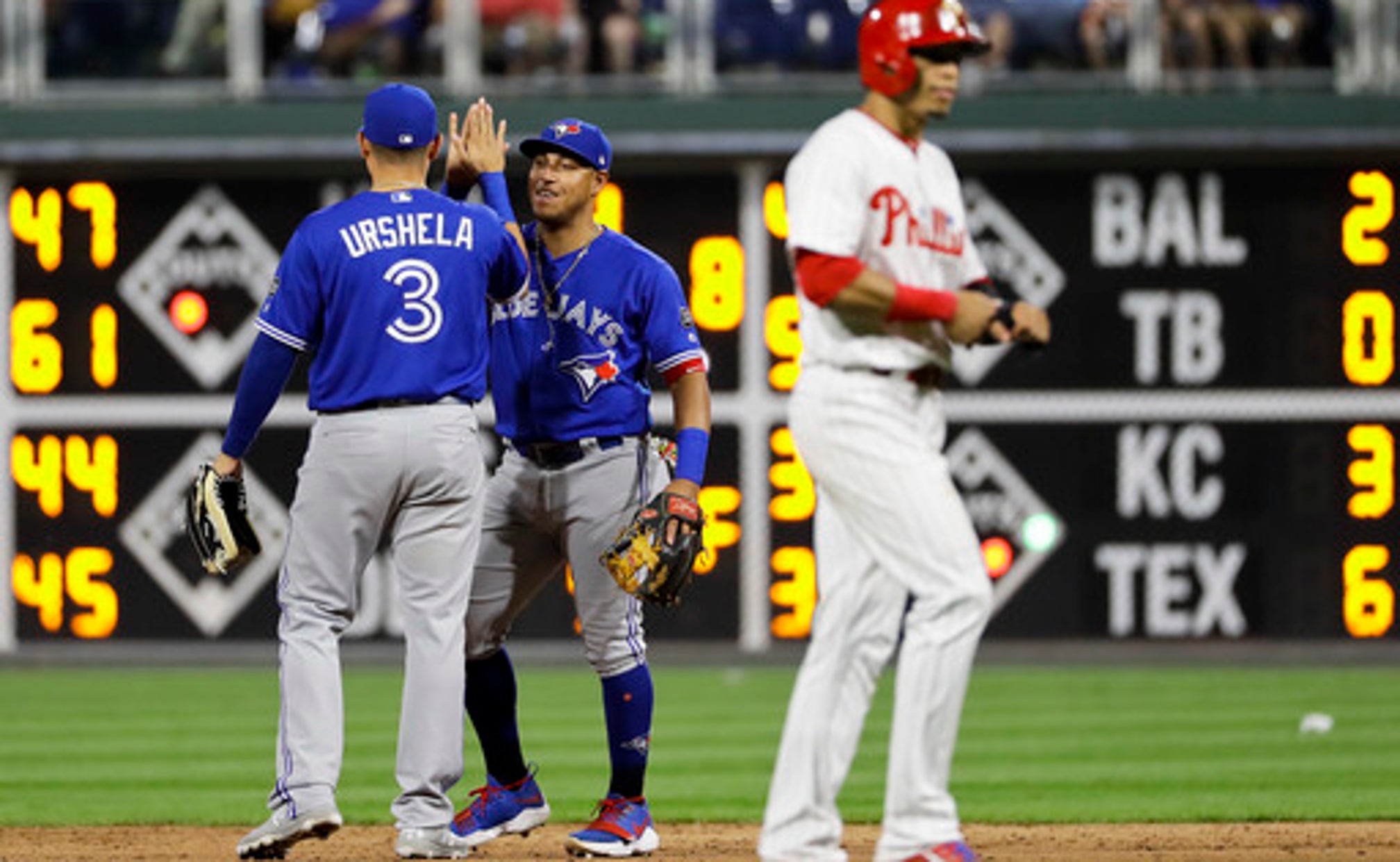 PHILADELPHIA (AP) Some positive self-talk on the mound helped Ryan Tepera close out a much-needed win for the Blue Jays.

Justin Smoak homered, Sam Gaviglio struck out six over six innings and Tepera escaped a ninth-inning jam for his first save to lead Toronto to a 6-5 victory over the Philadelphia Phillies on Friday night.

Yangervis Solarte and Kevin Pillar added RBI doubles for the Blue Jays, who opened a nine-game road trip after going 1-6 and getting outscored 43-22 on a seven-game homestand against Oakland and the Angels. Toronto blew late leads in two of those defeats.

''We desperately needed that,'' manager John Gibbons said. ''We needed to close that out and (Tepera) did it. I'm proud of him.''

Carlos Santana also homered for Philadelphia, which remained a half-game behind Atlanta for first place in the NL East after the Braves lost in Boston.

''We didn't quit,'' Phillies manager Gabe Kapler said. ''We fought. We were in the game until the last out.''

Tepera, filling in for closer Roberto Osuna, got his first save in his fourth opportunity - but it wasn't easy. The right-hander is a dependable, late-inning reliever but unaccustomed to the closer's role.

''I kept telling myself it was the same three outs; it doesn't matter what inning,'' Tepera said, before acknowledging that it was indeed different. ''It is a different animal. Batters definitely battle more when the game's on the line. You like to tell yourself that (it's the same three outs), but it is what it is.''

After getting Scott Kingery to fly out leading off the inning, Tepera gave up a single to Jorge Alfaro and a double by Pedro Florimon to put runners on second and third. Alfaro scored on a wild pitch that also moved Florimon to third. Tepera walked the next two to load the bases with one out before striking out Rhys Hoskins looking and getting Odubel Herrera to ground out.

The strikeout of Hoskins was a perfect pitch that just touched the black on the outside corner - at least according to plate umpire Joe West.

''I needed to make a pitch,'' Tepera said. ''It was something we could surprise him there. Luckily, I got the call.''

Hoskins didn't think it was a strike, but said he should have swung.

''I thought it was off,'' Hoskins said. ''Too close to take in that situation. It's unacceptable. You've got to put the ball in play and give yourself a chance.''

Earlier on Friday, Major League Baseball extended the administrative leave for Osuna through June 4. Osuna, who has nine saves this season after securing 39 in an All-Star campaign in 2017, was arrested earlier this month on assault charges.

''It's not as easy as everybody thinks to close out games or pitch late in games at the big-league level,'' Gibbons said. ''Guys stepped up tonight.''

The Blue Jays scored three runs with two outs in the first off Eflin (1-1).

Gaviglio retired eight straight to start the game before Eflin's drive into the Phillies bullpen in right-center to pull Philadelphia within two runs at 3-1.

Smoak drove Eflin's 1-0, 93-mph fastball into the seats in deep left with one out in the fifth. The two-run shot made it 5-1, and the Blue Jays went ahead 6-1 later in the frame when Russell Martin singled up the middle to score Solarte.

Herrera got just the second hit off Gaviglio with two outs in the sixth, a double to left-center, and Santana followed with a 409-foot shot to right to pull Philadelphia within 6-3.

Consecutive doubles to start the eighth by Cesar Hernandez and Hoskins off Tyler Clippard made it 6-4, but Clippard got the next three outs to escape more damage. Hernandez extended his on-base streak to 28 consecutive games with the hit.

Toronto improved to 13-3 against the Phillies since 2012.

Alfaro nailed Teoscar Hernandez trying to steal second in the third inning to complete a double play after Solarte struck out swinging. It was another hard throw from Alfaro, who entered with the five fastest throws to second by a catcher this season. His hardest throw, 91.3-mph, occurred May 13 against the Mets.

Blue Jays: SS Troy Tulowitzki was cleared to run on flat ground. Tulowitzki had surgery in April for bone spurs in both feet. He is not close to a return, though, manager John Gibbons said. ... Stroman will play long toss on Saturday and is scheduled to throw a bullpen session next week.

Phillies: Alfaro was shaken up in the first inning when a pitch by Eflin bounced before hitting him on the inside of the right arm. Alfaro shook it off and stayed in the game.