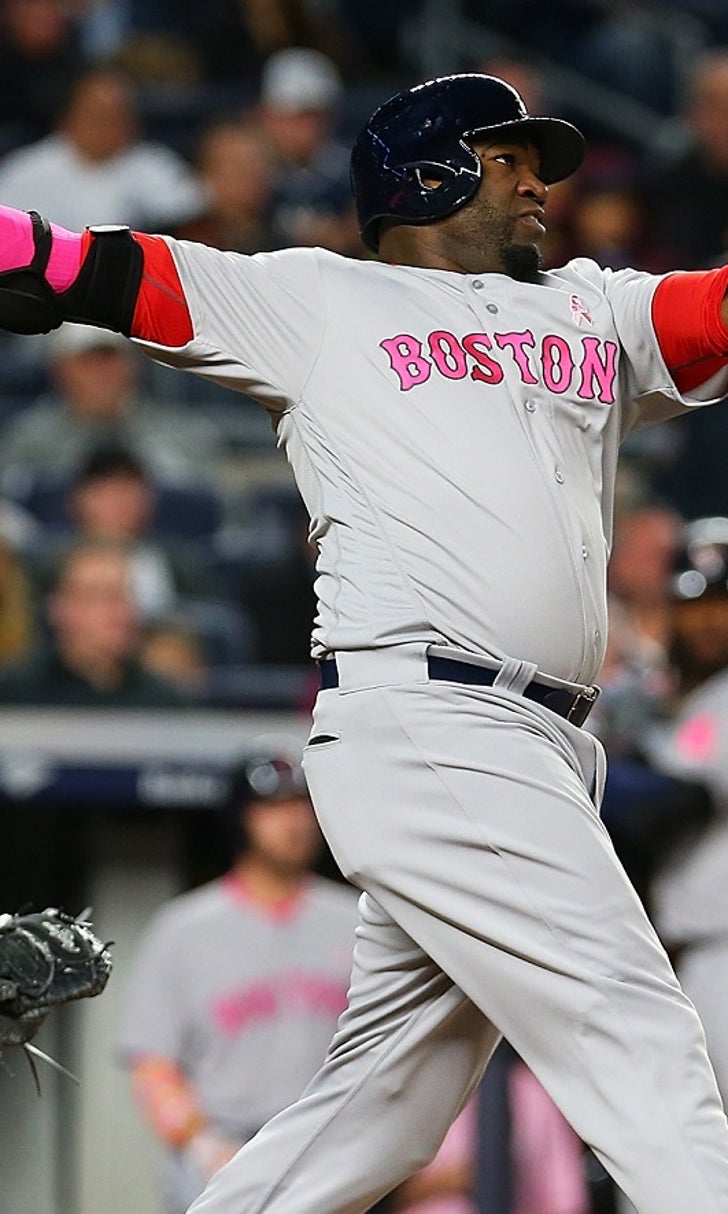 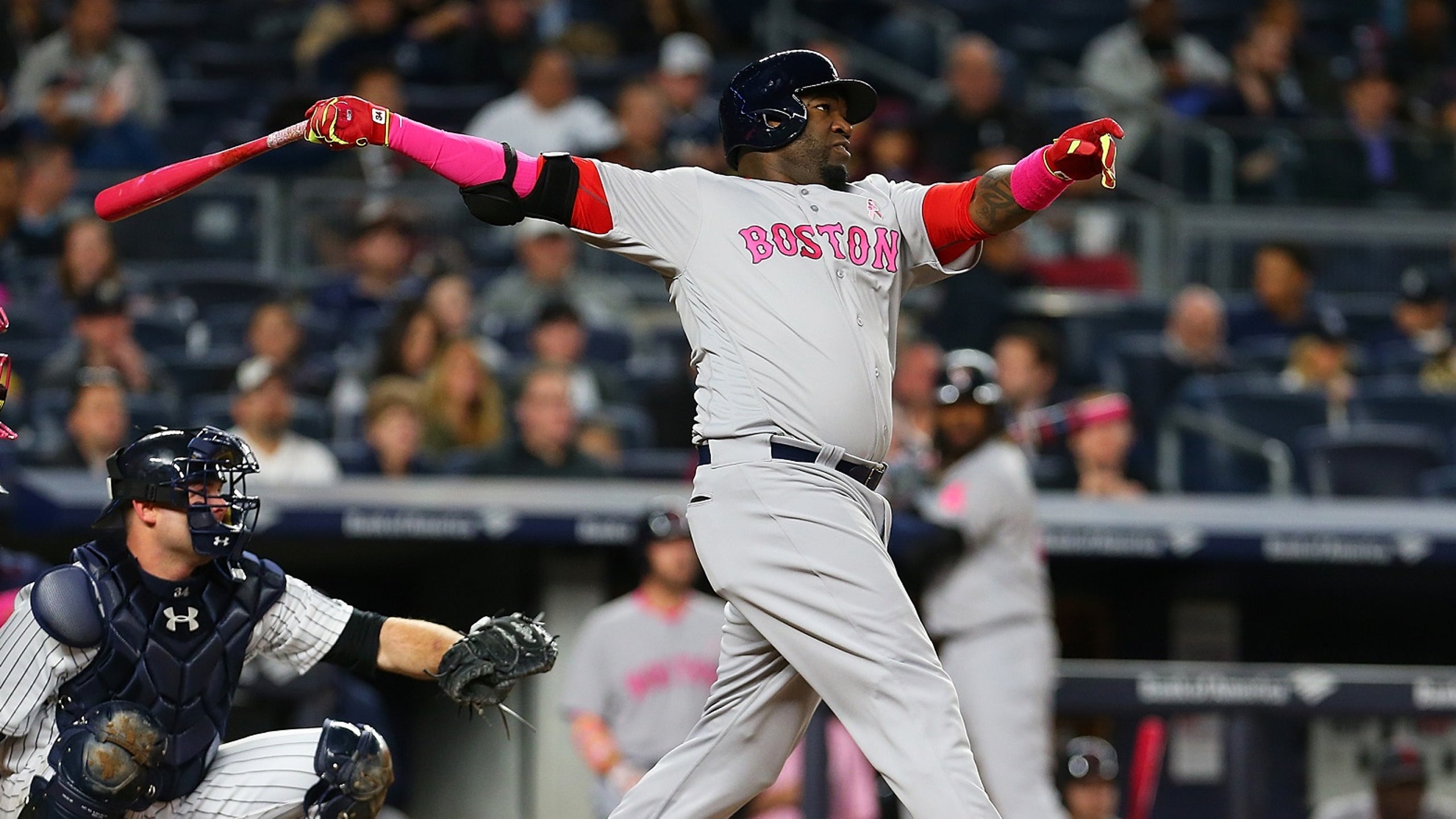 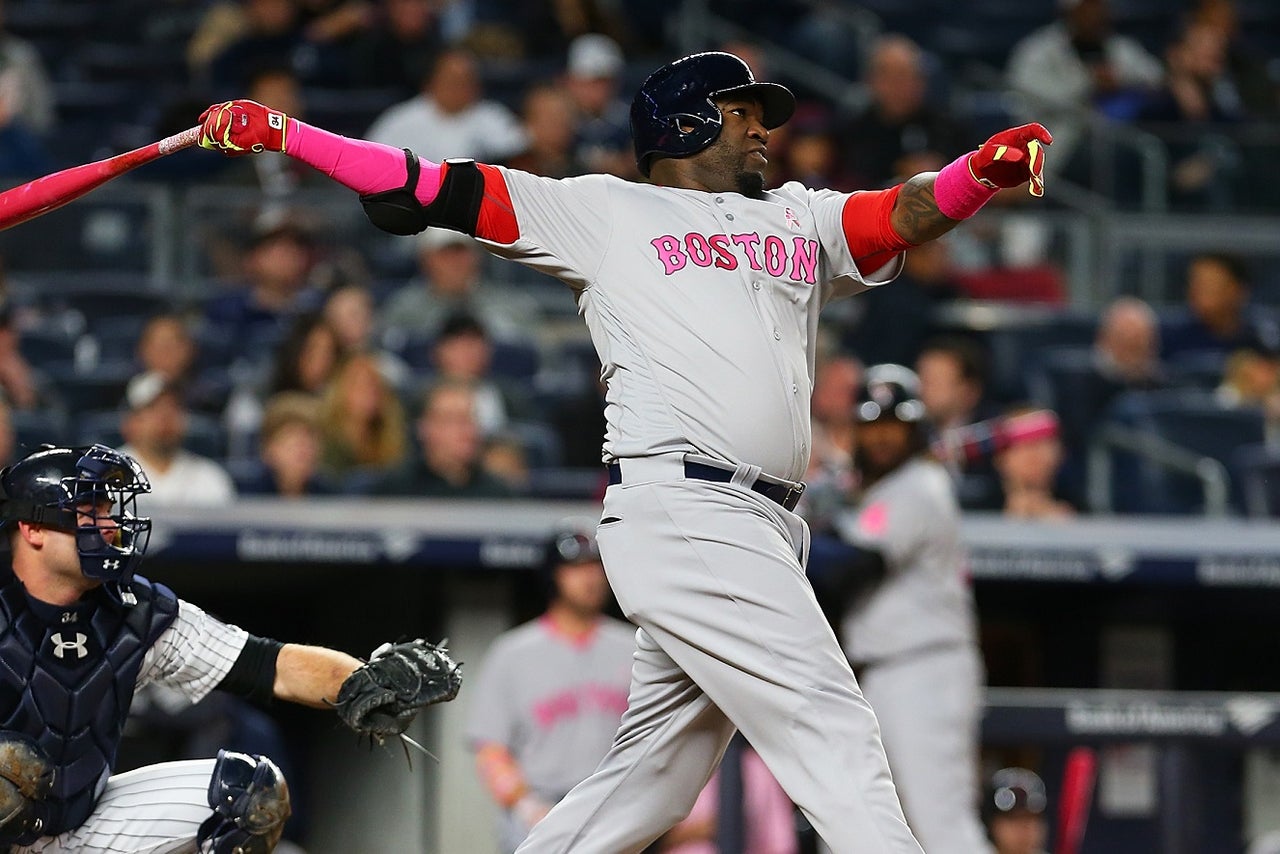 NEW YORK -- As usual, Big Papi was in the pink against the New York Yankees.

Swinging a pink bat and wearing pink wrist bands for Mother's Day, Ortiz hit two long solo shots off a struggling Luis Severino. And in his farewell season, the 40-year-old Ortiz has already been a major New York nemesis again: He has five home runs against the Yankees since April 29, giving him 52 in his career -- all but one with the Red Sox.

Dustin Pedroia lofted an early two-run homer and Xander Bogaerts also went deep for the Red Sox, who prevented a three-game sweep and won for the fourth time in six meetings with their longtime rivals this year.

Only 4 players have hit more career home runs against the Yankees than @davidortiz. pic.twitter.com/8cFfQMyyjU

Wright (3-3) walked one and struck out seven, sailing to his first complete game in 17 major league starts and lowering his ERA to 1.52. He was two strikes from a shutout, too, when Brett Gardner homered with two outs in the ninth inning.

The knuckleballer hardly got rattled, whiffing pinch-hitter Ronald Torreyes with his 101st pitch to end it.

"It definitely helps when the wind's not blowing as hard. There was a little bit of breeze but it was almost like throwing inside," Wright said.

Mixing his 73-75 mph knuckleballs with the occasional 87 mph fastball, Wright baffled the last-place Yankees all night. When he threw something soft, they seemed to hit it even softer. When he dialed up a heater, they swung late and missed.

"He was really good. He's been great all year," Yankees catcher Brian McCann said. "I felt like he could do whatever he wanted tonight with the ball."

Ortiz took out some frustrations from the series opener, when he went wild and got ejected after he was called out on strikes with the bases loaded in the ninth inning of a one-run game. He connected in the fourth and seventh to give him three homers in five at-bats against Severino (0-5) since the 22-year-old righty made his big league debut against Boston last August.

Big Papi has hit 454 of his 512 career homers with the Red Sox, moving him ahead of Yastrzemski (452) and leaving Ortiz behind only Ted Williams (521) on the franchise list.

"You're starting to get into names that are historic. A great career. And no signs of slowing down," Boston manager John Farrell said.

"He's in such a good groove. So many balls are squared up, hit hard," Farrell said. "He's having fun."

Severino matched a career best with nine strikeouts in 6 2/3 innings, but gave up a career-high three home runs. He retired 10 straight, seven on strikeouts, before Ortiz's first long ball.

"I think he's on the right track," Yankees manager Joe Girardi said. "If he throws the ball like tonight, I think he's going to win games if we score runs. ... To me, this is going to make him better in the long run."

Wright faced two batters more than the minimum and improved to 3-1 with a 1.33 ERA in four outings (three starts) against the Yankees.

Jackie Bradley Jr. had two hits to extend his hitting streak to a career-best 14 games, the longest current run in the majors.

Red Sox: LHP Eduardo Rodriguez (right knee) threw 93 pitches in his third rehab start for Triple-A Pawtucket. He gave up three earned runs and six hits, including two homers, over 5 2/3 innings against Rochester. Farrell said the team will meet with Rodriguez on Monday at Fenway Park, and the pitcher's next start could be in the majors. "I wouldn't rule it out," Farrell said. ... RHP Joe Kelly (shoulder impingement) is scheduled to make his second rehab start Wednesday for Pawtucket. "We'll look to advance him to 80-85 pitches," Farrell said. ... RHP Sean O'Sullivan, called up Friday from Pawtucket, is likely to make a spot start Tuesday night against Oakland.

Yankees: CF Jacoby Ellsbury missed his second straight game after straining a hip muscle Friday night and probably won't be ready to play Monday night, Girardi said. ... 2B Starlin Castro was removed for a pinch hitter in the ninth. He tweaked his lower back on the left side when he was thrown out by catcher Ryan Hanigan diving back into third base in the seventh. Castro said he was pulled as a precaution and hopes to play Monday night.

Yankees: All-Star reliever Aroldis Chapman is set to be activated after serving a 29-game suspension under baseball's domestic violence policy. Ready to make his Yankees debut, he'll join the team for the opener of a four-game home set against World Series champion Kansas City and immediately take over as closer in an imposing bullpen that already features Dellin Betances and Andrew Miller. Ivan Nova (1-1, 5.14 ERA) makes his first start of the season in place of injured CC Sabathia.