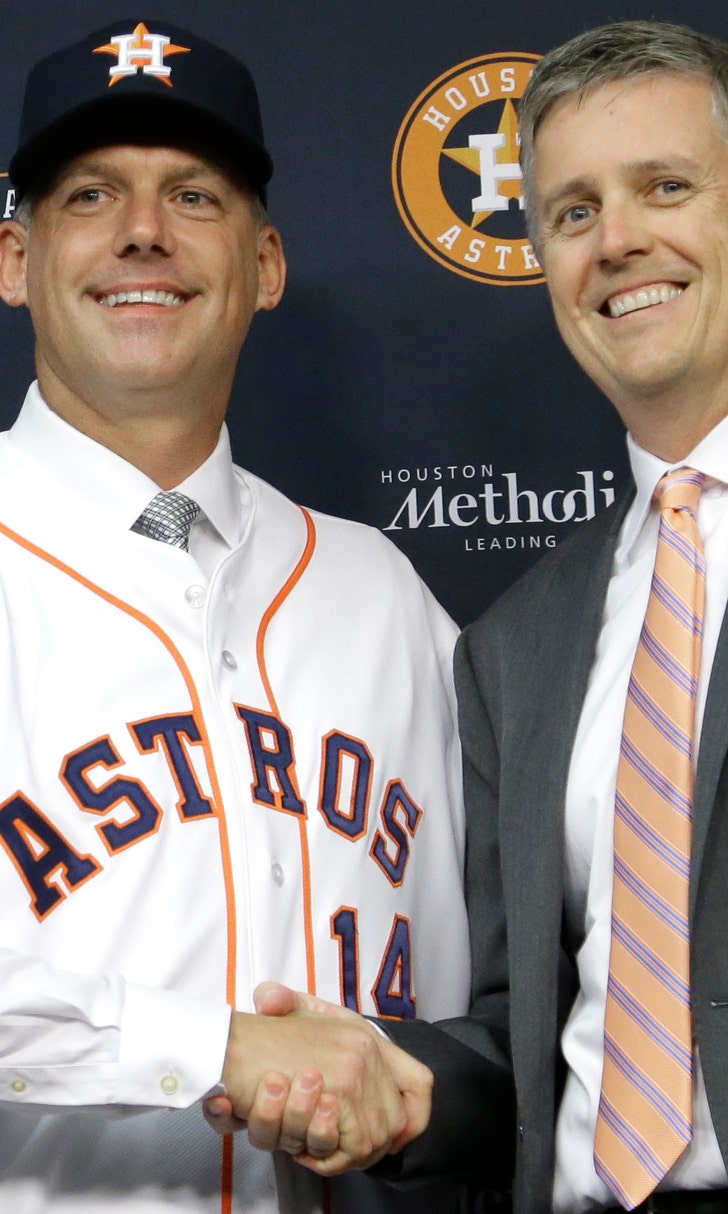 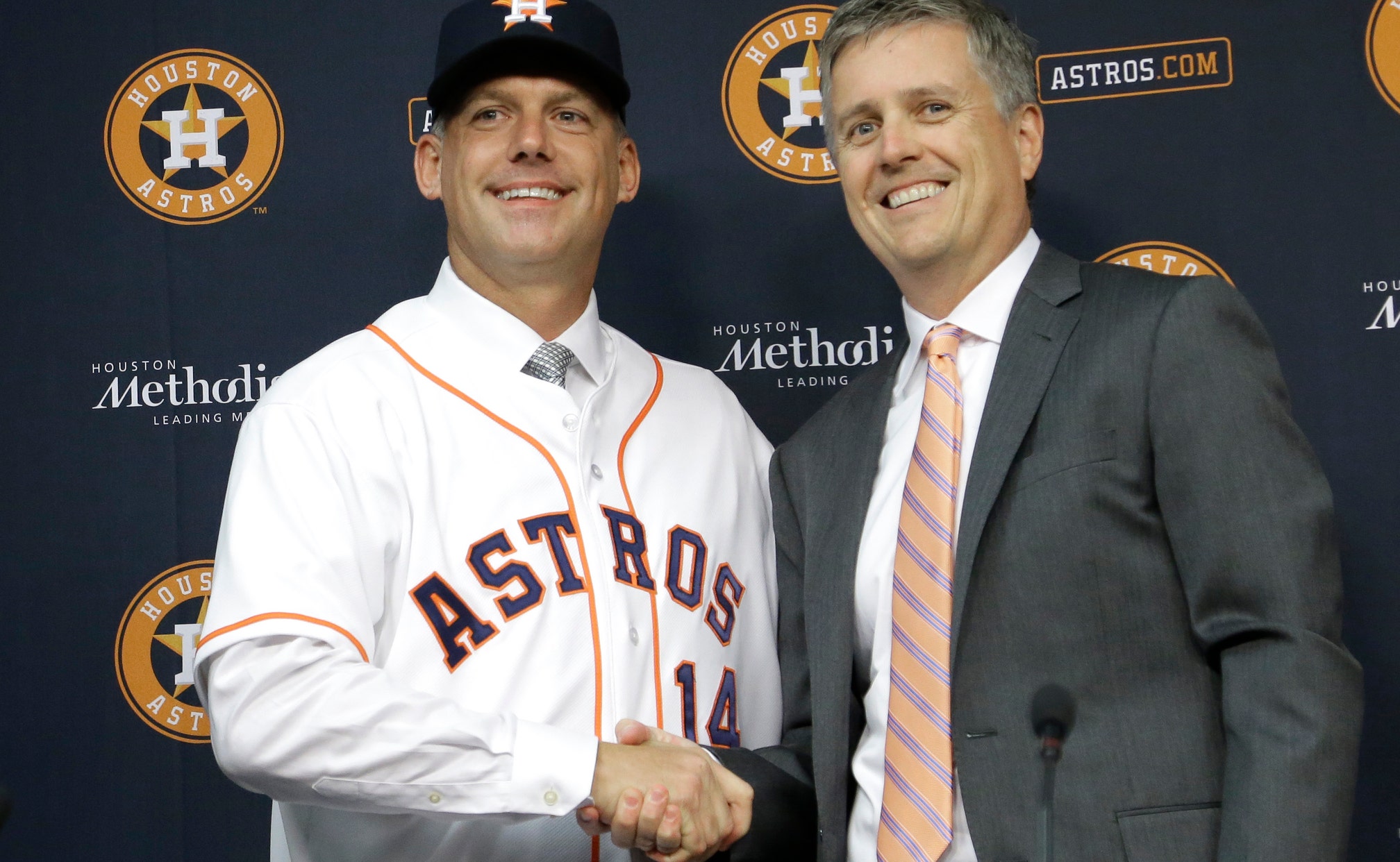 Astros look ahead after firing of Hinch and Luhnow

HOUSTON (AP) — The Houston Astros suddenly have a couple more holes to fill.

Less than a month before the start of spring training, the American League champions are without a manager and general manager after AJ Hinch and Jeff Luhnow were suspended by Major League Baseball and subsequently fired by team owner Jim Crane for the club's sign-stealing scheme.

The penalties announced by MLB commissioner Rob Manfred on Monday came after he found illicit use of electronics to steal signs in Houston’s run to the 2017 World Series championship and again in the 2018 season. The Astros were also fined $5 million, which is the maximum allowed under the Major League Constitution, and must forfeit their next two first- and second-round amateur draft picks.

Now that the punishment has been handed out and Hinch and Luhnow, the architects of Houston’s unprecedented success, the franchise must find a way to move forward. First the Astros must hire a manager and general manager who will try and continue the success that the previous regime built.

“I'm optimistic,” Crane said Monday. “This thing is deep here there are a lot of smart people here. We'll have a speed bump here ... this is a tough day. But can we recover? Absolutely. And we'll have a great team next year.”

Even with all the chaos surrounding the team, the Astros are expected to be favorites to win the AL West title again this season. They lost ace Gerrit Cole to the Yankees in free agency, but return almost all the key pieces that helped them to their second World Series in three year, this time capped by a Game 7 loss to Washington.

It’s unclear if Hinch’s firing will impact team morale. The 45-year-old Hinch was a favorite among players for his management style and interaction with the team. The former catcher and Stanford graduate was 481-329 in five seasons in Houston with four playoff trips.

To Crane, finding someone to replace him is the priority.

“We'll quickly look for someone to manage the team ... certainly we have possibilities internally,’’ he said. “We'll also look outside.”

If the Astros decide to promote from within, the most likely candidate is bench coach Joe Espada, who is seen as a rising star in the baseball community. Crane called him ‘’capable’’ of running the team on Monday.

The 44-year-old Espada began his coaching career with the Marlins and worked as a special assistant to Yankees general manager Brian Cashman and was an assistant coach for the Yankees before joining Houston for the 2018 season. Espada, who played baseball but never reached the majors, was a candidate for some managerial openings this offseason.

The Astros could choose to pick someone from outside the organization to try and separate themselves from anybody who was around when the cheating occurred. If they want to go with someone with years of managerial experience they could look at several veteran managers who are available in former Orioles manager Buck Showalter, John Gibbons, a Texas native who most recently managed the Blue Jays or former Nationals manager Dusty Baker.

If they decide to look for someone with ties to the franchise, a candidate could be Brad Ausmus, who played for the Astros for 10 years and has managed the Tigers and Angels.

Though Crane will work quickly to hire a manager, he said that he won’t rush just to have someone in place to start spring training and that they could open camp with an interim manager.

Hiring someone to replace Luhnow isn’t as immediate of a need, and Crane could wait to shift his focus to that until after he has someone in place to manage the team. Crane said he’ll oversee baseball operations in the interim and that he’s been involved in the meetings concerning arbitration in the last week.

“We've got good leaders in a number of those spots and so it's just a matter of organizing and managing that staff for the next 30 days and hopefully we can get someone to take the coin,’’ Crane said.

Crane indicated on Monday that he could also promote someone from within to replace Luhnow. If he does that, a top candidate would be Pete Putila, who was promoted to assistant general manager this offseason. Putila has been with the organization in various roles since 2011.

‘’I'm going to evaluate (the front office) and see what we have inside, and we'll start looking outside,” he said. ‘’I think it's a very good job. I think a lot of people would want to come in here and step into that position.’’