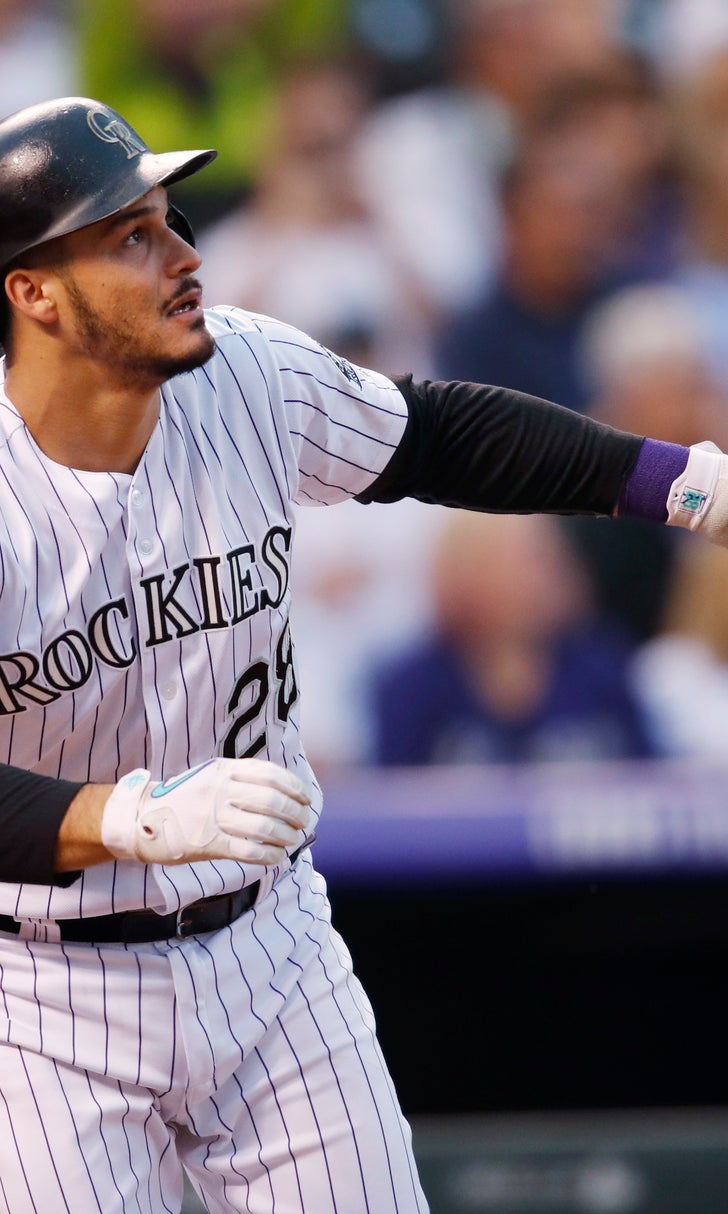 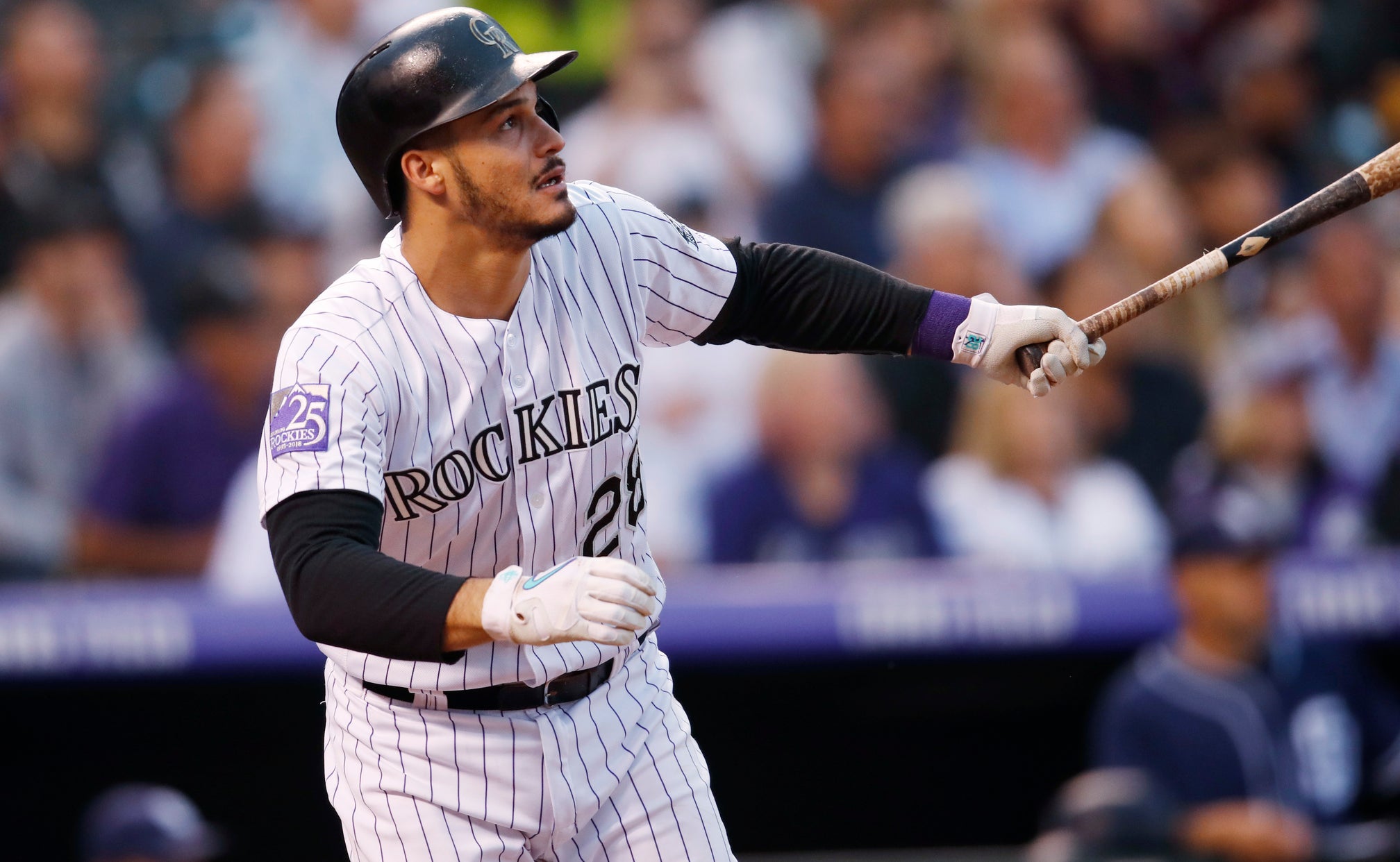 DENVER (AP) — The season remains weeks away and already Nolan Arenado hit one out of the park.

With his record-setting deal anyway.

It could be the start of that kind of year for the Colorado Rockies All-Star third baseman , who recently agreed to a $26 million deal to avoid arbitration — the largest one-year salary for an arbitration-eligible player.

Next up: Possibly a long-term deal that could keep him in Denver for years to come. If not, Arenado, who turns 28 on April 16, hits the free agency market at the end of the season. He will no doubt be a highly coveted commodity.

"Nolan's a really good player and the longer he plays with the Rockies, the better we'll be," said outfielder Charlie Blackmon, who's looking at a switch from center to left field in 2019. "It's pretty safe to say he makes every team he's on even better. I really hope that's with the Rockies for years and years to come."

Arenado's been very clear about his No. 1 priority: Playing for a contender. The Rockies have certainly made good on that.

They're coming off a season in which they took the Los Angeles Dodgers to an extra game to decide the NL West — the Dodgers won — and then beat the Chicago Cubs in the NL Wild Card game. Colorado was eliminated from the postseason by Milwaukee.

It was the second straight season the Rockies had gone to the playoffs, something that's never happened before in franchise history. The team lost to Arizona in the 2017 NL Wild Card contest.

"I'm not a big fan of losing. We did less losing last year than we did in the past," Blackmon said. "I'd like to win a few more games, go a little deeper, do better than we did the year before."

Arenado finished last season hitting .297, with 38 homers and 110 RBIs. He's a maestro at third in picking up his sixth straight Gold Glove. His recent deal to avoid arbitration broke the previous mark of $23 million that Josh Donaldson brought in last season in Toronto.

To help Arenado and provide an offensive boost — the team hit a franchise-worst .256 — the Rockies brought in Daniel Murphy to play first base. That means Ian Desmond will head to the outfield. They'll rely heavily on youngsters such as Garrett Hampson, Ryan McMahon or Brendan Rodgers at second base after the departure of DJ LeMahieu to the New York Yankees.

They need their young staff of Kyle Freeland and German Marquez to take another step forward, along with Jon Gray returning to his old form after struggling down the stretch and being left off the postseason roster.

Things to know heading into spring training after a season in which the Rockies finished 91-72:

NEW LOOK: Clubhouse leader Carlos Gonzalez won't be with the team for the first time in a decade. At least, that's the case for now. Gonzalez didn't start out with Colorado last season, but signed a one-year deal in mid-March. He hit .276 with 16 homers and 64 RBIs. Also gone are LeMahieu and reliever Adam Ottavino , who both signed with the Yankees. Outfielder Gerardo Parra remains a free agent.

ROOKIES TO WATCH: Rodgers could emerge as the second baseman for the Rockies. The third overall pick in the 2015 draft, Rodgers hit a combined .268 with 17 homers for Double-A Hartford and Triple-A Albuquerque.

THEY'RE SET: Trevor Story had a breakout season in making his first All-Star team. He hit .291 with 37 homers and also cut down on his strikeouts. He dealt with some elbow soreness down the stretch, but pronounced it good to go.

THEY'RE NOT: Ottavino leaving for the Yankees leaves a big eighth-inning hole in the bullpen. The Rockies relied heavily on Ottavino to bridge the gap to Wade Davis, who saved a franchise-record 43 games. The spot could be filled by moving up Seunghwan Oh or Scott Oberg. Other possibilities include Jake McGee, Bryan Shaw or Chris Rusin, three relievers looking for bounce-back seasons.

ON DECK: Colorado isn't getting much love from Las Vegas, which lists the team as likely to win 82 1/2 games in 2019. Some pundits have tabbed the Rockies to be the playoff squad most likely not to make it back. To think, they were no longer viewing themselves as underdogs. "We're trying to win a World Series and contend and sustain that," manager Bud Black said. Colorado opens the season at Miami on March 28.