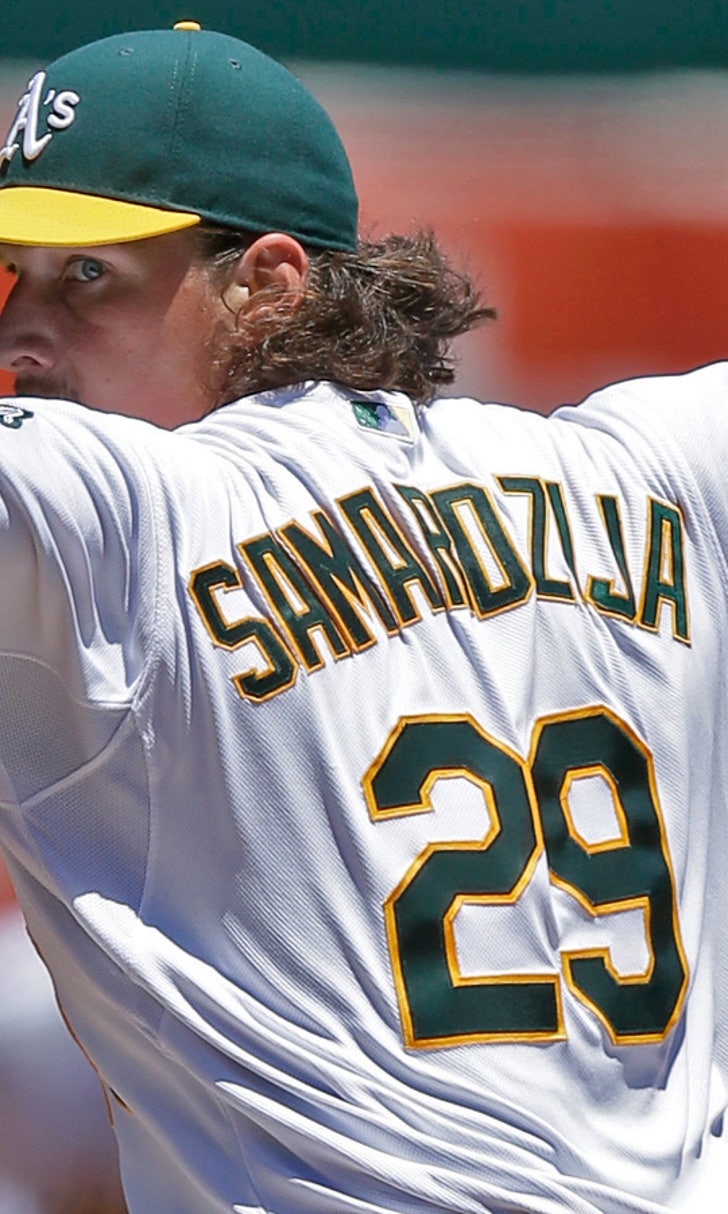 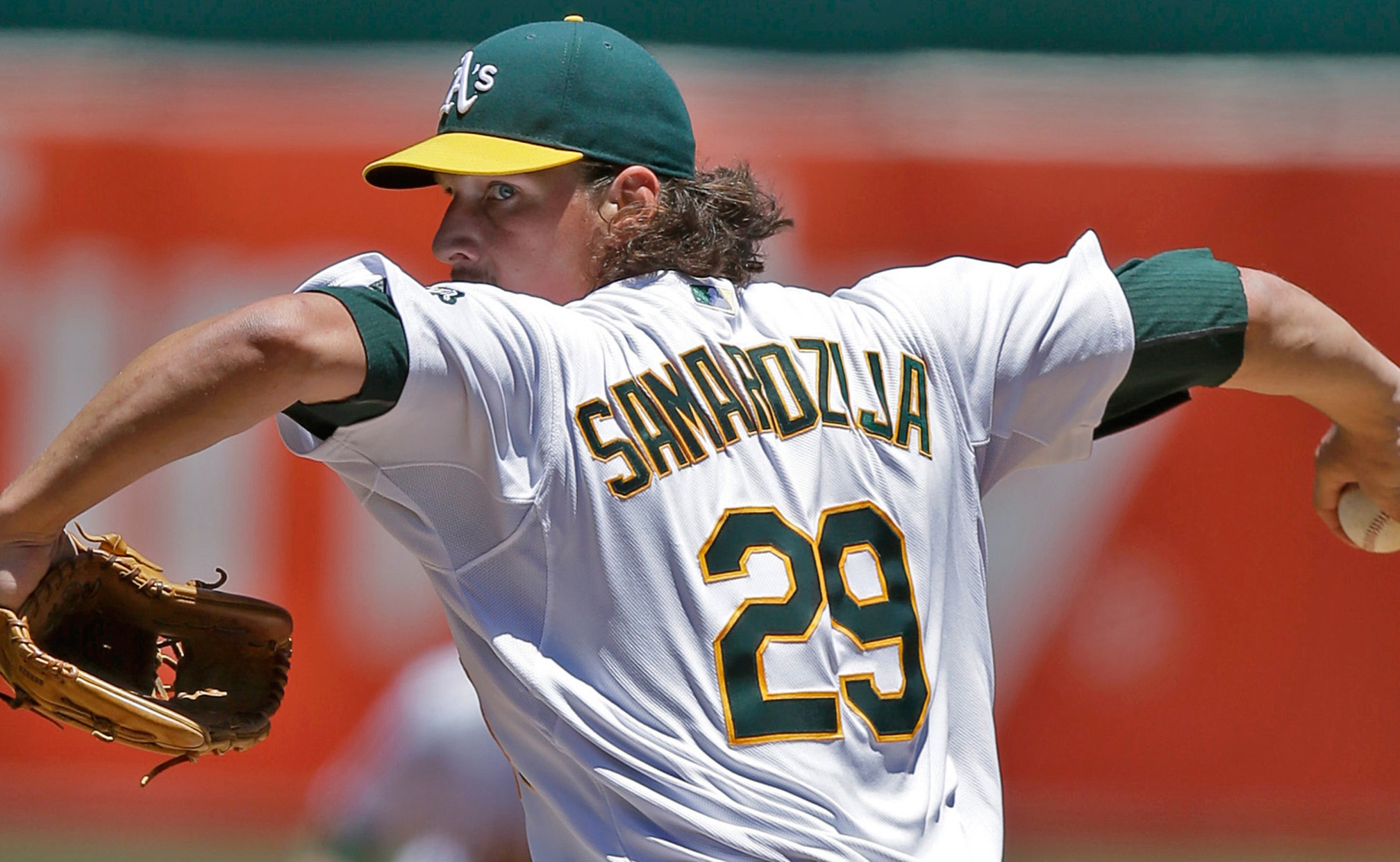 All-Star selections: Trade leaves Samardzija as a star without a spot 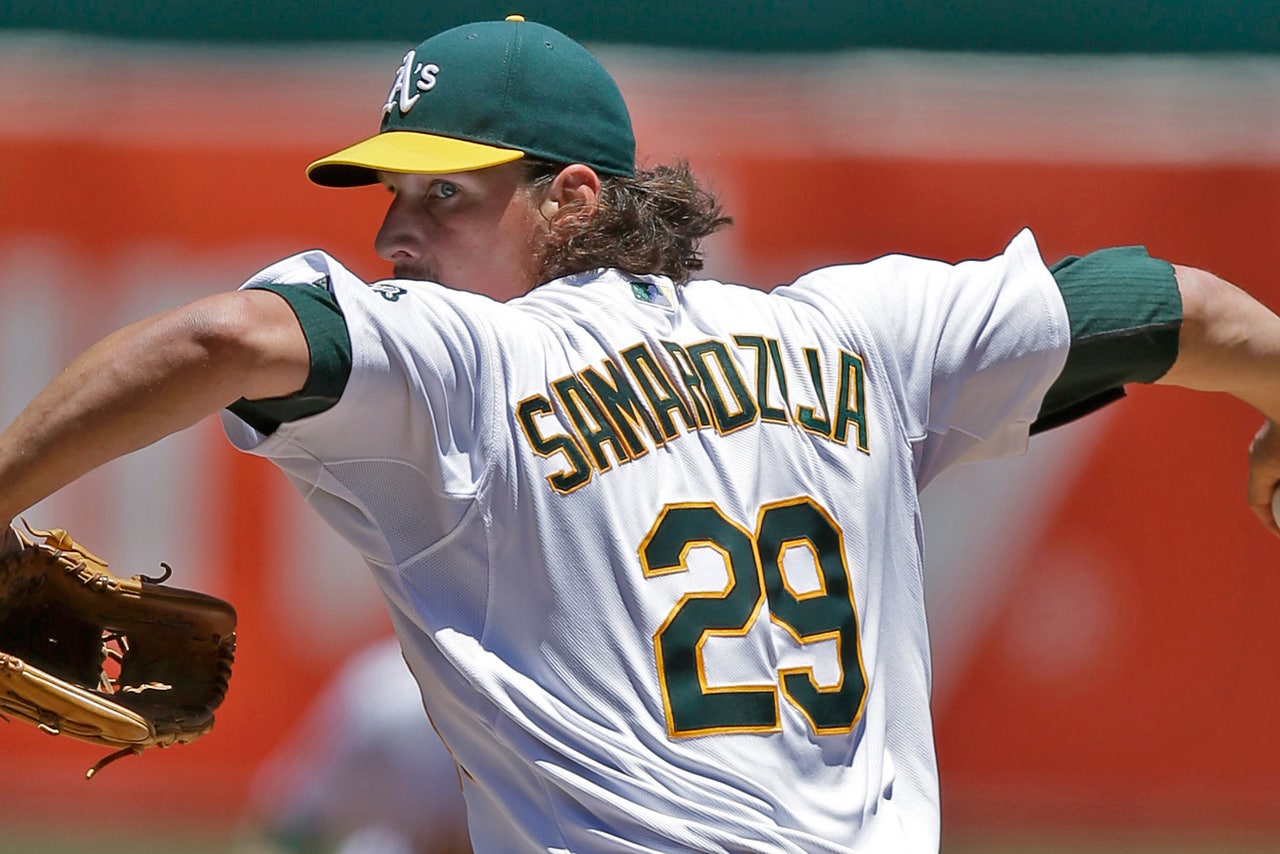 The trade that put Jeff Samardzija on a postseason contender cost him a chance to pitch in his first All-Star Game.

A day after Samardzija was dealt from the Chicago Cubs to Oakland, a big league-high six Athletics were picked Sunday for the game at Target Field in Minnesota on July 15.

That doesn't include Samardzija, selected as a National League All-Star. Major League Baseball said he is ineligible to play because of the league switch.

The 29-year-old right-hander, who was 2-7 with a 2.83 ERA and 103 strikeouts for the Cubs, won his American League debut Sunday when he allowed one run in seven innings for a 4-2 victory over Toronto. He will be introduced with the NL players before the All-Star Game; still to be decided is whether he wears a Cubs or A's uniform -- or a generic NL jersey.

"I won't get to pitch, which is a bummer, but that's all right," Samardzija said. "I'll just go through whatever ceremonies they have and just jump over to the AL dugout with an NL jersey on and have some fun with the six other dudes we have over there, which is exciting."

"It's really cool," A's manager Bob Melvin said. "We were hoping for something like this."

Yankees shortstop Derek Jeter, playing his 20th and final season, was chosen for his 14th All-Star team and will start for the ninth time. He gets reunited with Seattle second baseman Robinson Cano, his former double-play partner in New York.

Mariano Rivera, the retiring Yankees reliever, was the center of attention at last year's All-Star Game, when the Mets hosted in Citi Field. Jeter could be in the spotlight this year.

"All-Star Game was in New York last year. It's a little bit different," Jeter said. "I don't go into it with any expectations. Just trying to enjoy myself and have fun with whoever is here."

"I had a chance to talk with David, and he felt the four days of rest might be more advantageous to him," said Boston skipper John Farrell, the AL manager. "He was a pro about it. He spoke his mind and had a lot of input in the decisions."

Also elected by fans to start for the AL were Detroit first baseman Miguel Cabrera, Donaldson, and outfielders Jose Bautista of Toronto, Adam Jones of Baltimore and Mike Trout of the Los Angeles Angels.

Baltimore's Matt Wieters, sidelined by season-ending elbow surgery on June 17, was elected to start at catcher and will be replaced by Kansas City's Salvador Perez.

Orioles bopper Nelson Cruz, tied for the major league home-run lead with 27, was voted in by fans at designated hitter after serving a 50-game suspension last year for violating baseball's drug agreement.

The big year could lead to a large contract for Cruz, who left Texas for an $8 million, one-year deal with Baltimore.

"It's always a blessing when you make the All-Star Game," Cruz said. "I'm happy because I know I made the right decision."

Tanaka and setup man Dellin Betances are the first Yankees rookie pitchers to be picked as All-Stars since Spec Shea in 1947.

Surprise selections included Pittsburgh utilityman Josh Harrison and left-hander Tony Watson, and St. Louis reliever Pat Neshek, who is from Minnesota and began his career with the hometown Twins.

"I shook head my head for a while. I couldn't believe it," Neshek said, his voice cracking with emotion. "It's awesome to be rewarded like that and to get the chance to play against the best."

Milwaukee closer Francisco Rodriguez made his fifth All-Star team, his first since 2009.

Bautista, at 5.68 million, received the most votes for the second time in four years. Tulowitzki topped the NL at 5.35 million.

The Battle For Titletown USA
Both have won titles already this year. Now, L.A. and Tampa Bay vie for ownership of the sports world, Martin Rogers writes.
3 hours ago

Why the Rays will shine through
The Dodgers have countless advantages, but FOX Sports analyst Ben Verlander offers five reasons why he's picking the Rays.
6 hours ago

The Year Of Mookie Betts
Someone had to have a great 2020. Why not the man who brings such joy, Charlotte Wilder writes, that everyone roots for him?
7 hours ago