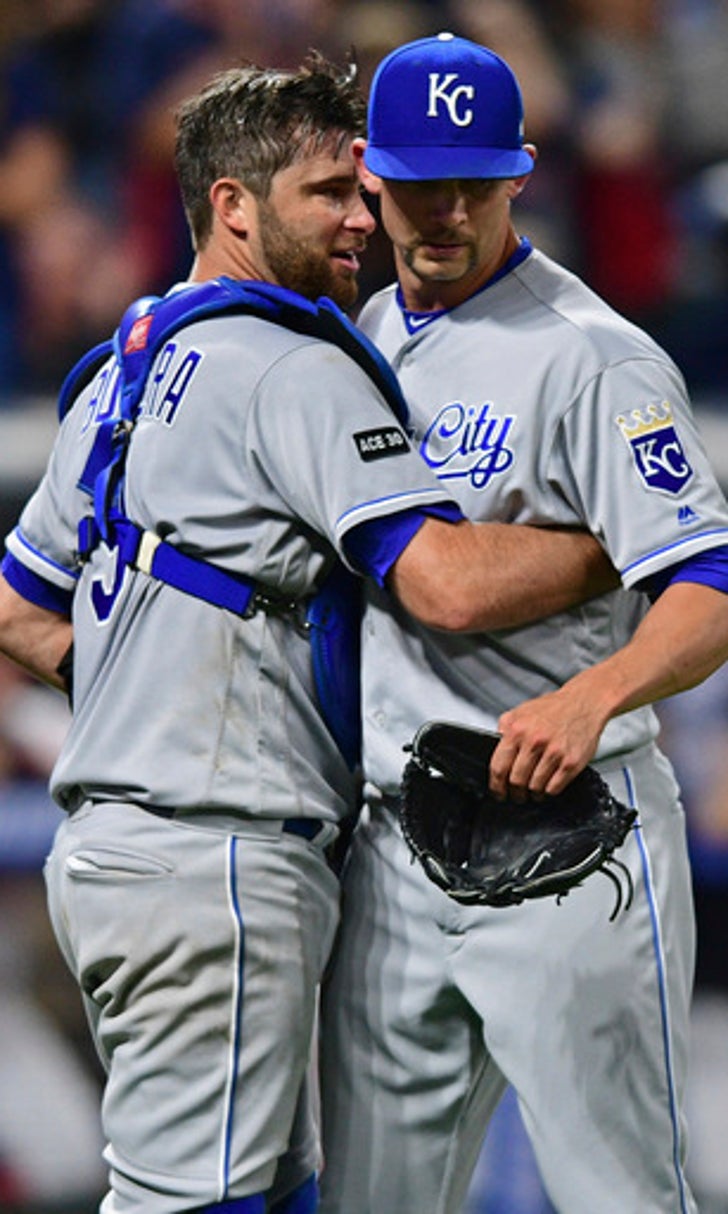 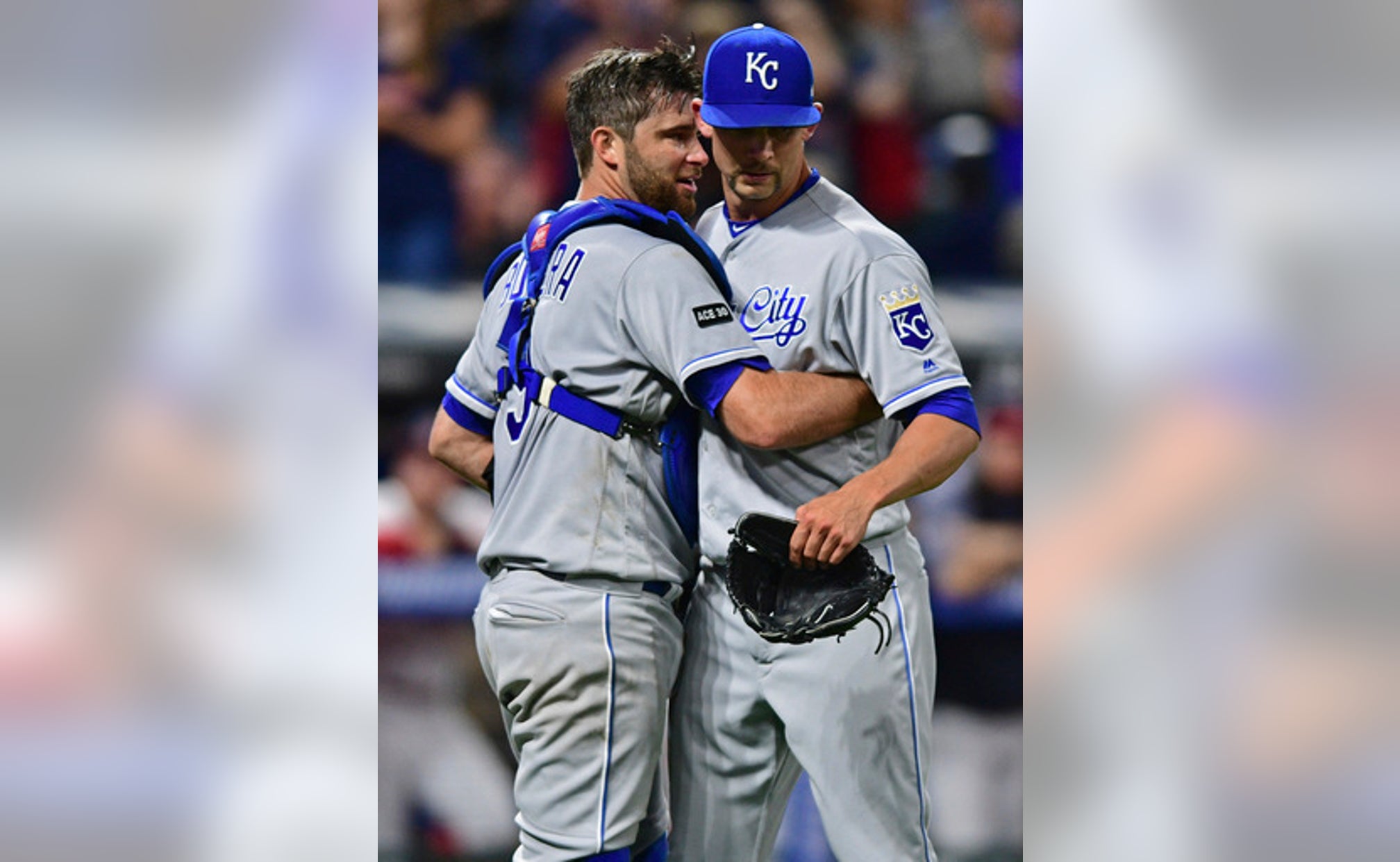 22 and through: Indians' AL record win streak stopped at 22

CLEVELAND (AP) When reality set in, the ovation steadily grew as the Cleveland Indians emerged from their dugout.

With the scoreboard showing a loss and the Kansas City Royals shaking hands and high-fiving each other nearby, the Indians tipped their caps to salute fans who came hoping to see more late-inning magic and a record streak continue.

Cleveland's historic run is over.

The Indians, who captured America's attention during a dominating three-week run, had their AL-record winning streak stopped at 22 straight on Friday night with a 4-3 loss to the Royals, who became the first team to conquer the defending league champions since Aug. 23.

Jason Vargas (16-10) pitched into the sixth and Brandon Moss homered off Trevor Bauer (16-9) as the Royals, who were beaten five times by Cleveland over the past few weeks, ended baseball's longest win streak in 101 years.

But when it ended, there was a celebration as a crowd of 34,025 fans saluted a team that took them on an improbable ride they are unlikely to see again in their lifetimes.

''They've been so supportive,'' said Indians manager Terry Francona, who led his team out of the dugout to return the love to the crowd. ''The atmosphere around here is incredible and I think our players wanted to show their appreciation. It's by no means the last game of the year or anything like that, it's just been pretty incredible how they've reacted and we just wanted to show our appreciation because we don't take it for granted.

The Indians set a new league mark and came within four of matching the overall record held by the 1916 New York Giants, a 26-game string that became the subject of scrutiny because it included a tie in the middle.

But despite the loss, Cleveland's magic number for clinching the AL Central dropped to two after second-place Minnesota was beaten by Toronto.

When Francisco Lindor, one of the stars in Cleveland's 3-2 win on Thursday, struck out with a runner on first to end it, the crowd experienced the slightest moment of disappointment before appreciating what they had just seen. And as they stood and cheered, the Indians clapped in return.

''It's been great,'' Bauer said. ''They came out, they supported us. The atmosphere last night and tonight was spectacular. Shoot, even tonight after the loss, everyone was standing and stuff like that. It was a pretty cool moment.''

The Indians, who are already assured a playoff spot, not only broke the previous AL record of 20 held by the 2002 ''Moneyball'' Oakland Athletics, but they served notice that they well could be the team to beat in the postseason as they attempt to get back to the World Series and perhaps end their 68-year title drought after the Chicago Cubs halted their 108-year dry spell at Cleveland's expense in 2016.

Jose Ramirez, who has forced his way into the MVP conversation, hit a two-run homer and the Indians took a 3-1 lead before the Royals scored a run in the fourth, fifth and sixth.

With one last chance in the ninth, the Indians put the tying run on base before Royals reliever Mike Minor struck out the side for his first pro save, fanning Lindor on a pitch in the dirt.

That touched off a wild celebration, which shook Progressive Field and gave Cleveland fans a chance to get ready for bigger games to come.

''I think it was appropriate. We haven't lost a game in three weeks. We played a good game,'' Cleveland outfielder Jay Bruce said. ''It wasn't like we got just blown out or anything. I think (it was important) to have a bit of a light-hearted attitude about it all, and not take it too hard, obviously, because we're in a great position.

''We just did something that, depending on who you ask, one or no teams have ever done. So, it's one of those deals where we understand what the situation is, and this is not something that would happen very often.''

For the better part of a month, the Indians had no equals.

''What they did over there was amazing. I mean, it's utterly amazing,'' Royals manager Ned Yost said. ''It's just unfathomable for me that you can go three weeks without losing a game. I mean, it was a tremendous accomplishment.''

''I mean, we've got a runner on first, two outs, two strikes on Lindor, and I told Jirsch (third base coach Mike Jirschele), `man, we've been here before.' Luckily we got through it tonight,'' he said.

On their way to making AL history, the Indians romped through the league like no team has before.

They outscored opponents 145-41, led in all but 12 of 207 innings, hit 42 homers and captured the attention of baseball fans fixated on the hot-then-cold Los Angeles Dodgers, Houston Astros and seeing how far Giancarlo Stanton and Aaron Judge could hit homers.

Francona kept his players focused throughout the streak, mindful that it could become too big. They'll likely wrap it up their division this weekend and can start looking ahead to a postseason where the only streak that will matter is winning the last game they play.

''To me, it's just kind of a jumping off point,'' Francona said. ''Where do we go from here? It's up. Common sense said you're going to lose a game. It was a lot of fun. We'll show up tomorrow and my guess is we'll have real good energy and see if we can beat the Royals.''

Royals: C Salvador Perez sat out with a pulled muscle in his side and is considered day-to-day. He was injured taking a swing Thursday. ... RHP Joakim Soria is expected to join the team Saturday after returning to Arizona for the birth of his son.

Indians: OF Lonnie Chisenhall had his calf re-examined by the medical staff after leaving with tightness on Thursday night. The club is hoping the injury is nothing serious after Chisenhall missed more than two months with a calf injury. ... OF Jason Kipnis is expected to play five innings in center field on Sunday when he's activated after his second DL stint with a calf injury. The Indians are lacking outfield depth following injuries to Chisenhall and rookie Bradley Zimmer (broken hand).

RHP Carlos Carrasco tries to get the Indians to their ninth division title since 1995 on Saturday, when he faces Royals RHP Jason Hammel.