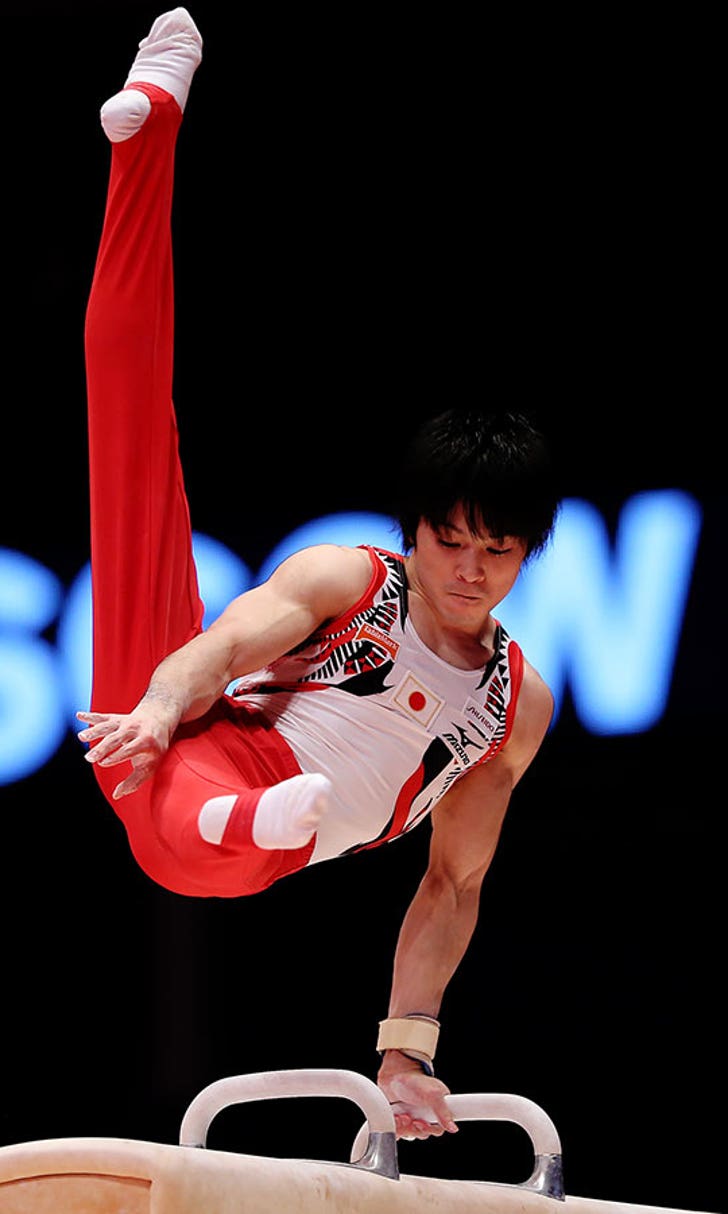 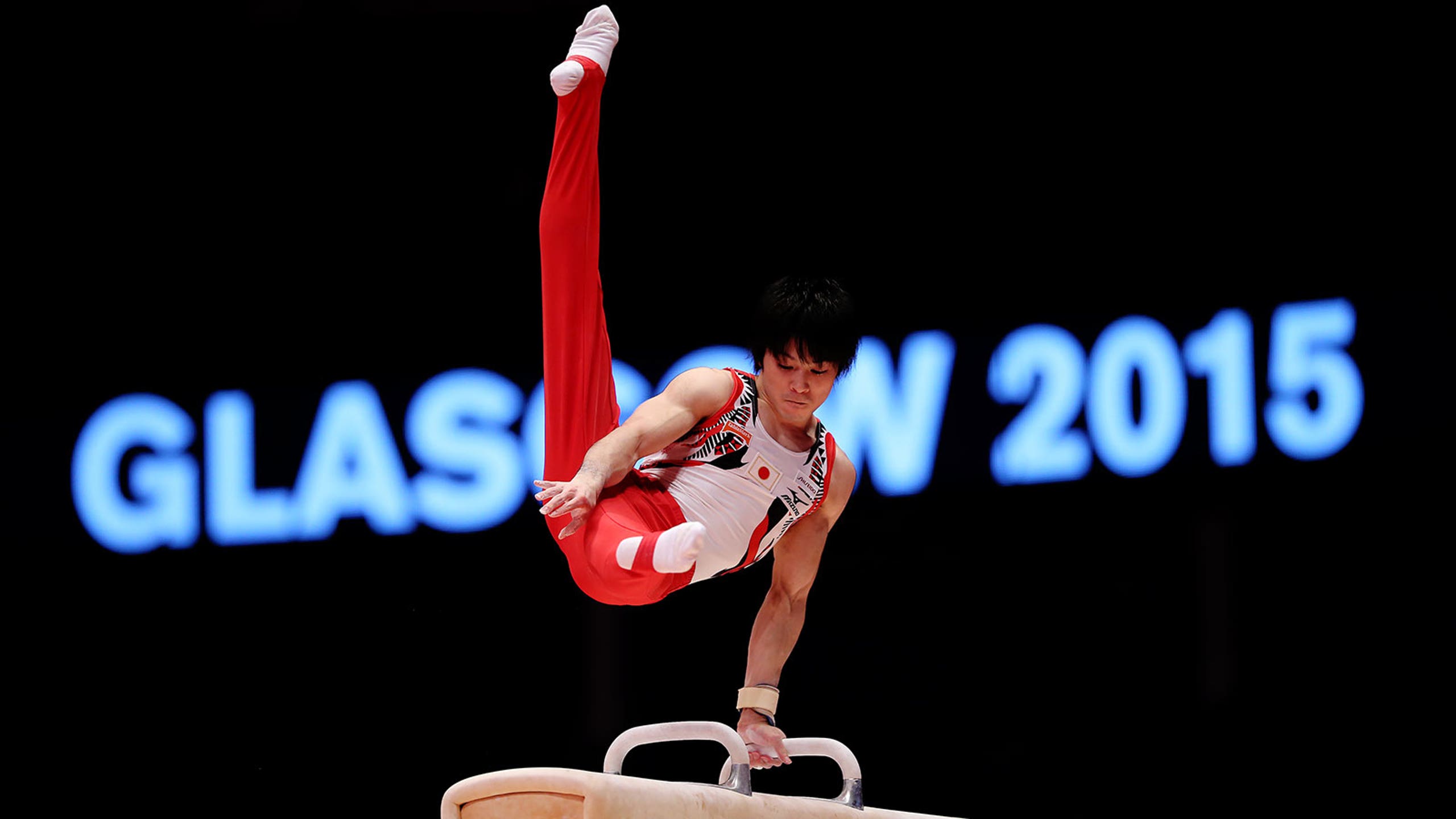 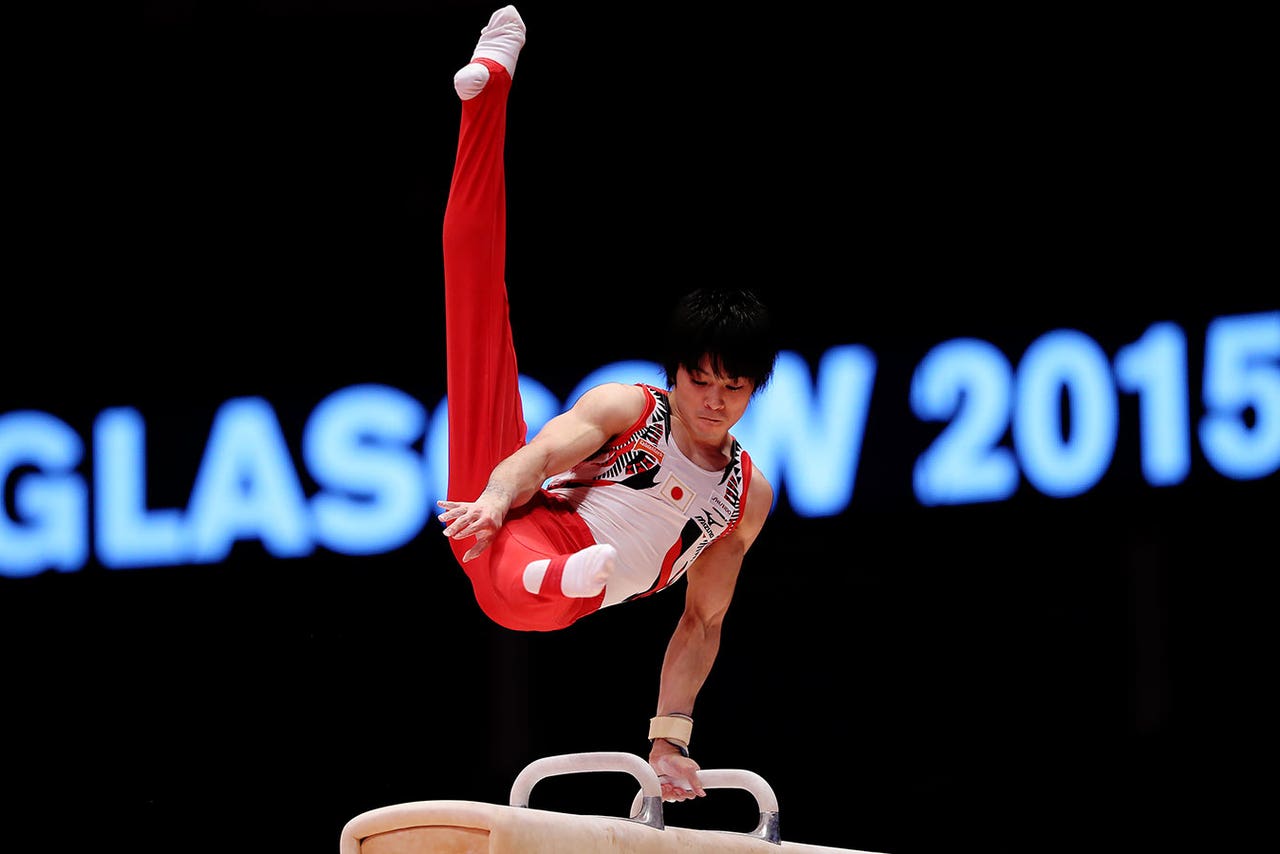 This isn't about history for Kohei Uchimura. This is about national pride, the perpetual chase of perfection and respect for his own considerable gifts.

Whether the Japanese star is the greatest male gymnast ever remains up for debate, though perhaps not for much longer. The sixth world title he won Friday night came with as much ease as any of the five that came before it.

There was never a doubt. Not from the near flawless opening floor exercise at the start of the night to the slightly watered down high bar routine that ended with Uchimura nailing the landing as if his feet were suctioned to the mat.

When his final score of 92.332 points was posted -- more than 1.6 better than Cuban teenager Manrique Lardue and China's Deng Shudi -- the relentlessly self-controlled 26-year-old held up six fingers and flexed. It's as close as he'll ever get to a humble brag.

Yes, he's aware of how often he finds himself atop the podium. Yet he's not doing it these days to add to his bling.

"It's not about the result," Uchimura said through a translator. "It's about the performance."

And doing it for his home country. Uchimura already filled the one whole in his otherwise immaculate resume when he helped Japan to its first team world title in nearly 40 years Wednesday night. Freed of the burden he's carried for the better part of a decade, he soared as elegantly as ever, each set a fluid mix of precision, artistry and strength that even left his biggest rivals acknowledging his dominance.

"Although (Uchimura) does not have the most difficult routines," Chinese delegation leader Ye Zhennan said, "he is the best in execution."

Execution that for a few hours seemed to meet Uchimura's own impossibly high standards.

Even as Japan triumphed over host Britain and China in the team competition, Uchimura admitted frustration afterward for botching high bar routine, a miscue that led to several tense minutes as the judges deliberated. When Japan's lead remained intact, Uchimura exhaled while pledging to be sharper in the all-around.

His biggest competition came from the surprising Larduet. The 19-year-old appeared right at home on the biggest stage of his young career. His powerful tumbling runs made the floor creak underneath him and his parallel bar set was a breathtaking mix of technical prowess and youthful aggression.

Larduet's silver medal marked the best-ever finish by a Cuban male in the all-around. Though he'll have to get through an Olympic test event next April if he wants to face Uchimura again in Rio, Larduet hardly appears overwhelmed at the prospect of facing a legend.

"I've been watching (Uchimura) on video for several years now," Larduet said. "So I'm really proud that I can compete with him."

Feng became the first Chinese gymnast since two-time world champion Yang Wei in 2007 to earn a medal in the all-around, momentum Feng believes can carry him even further in Brazil next summer and help put China back in its usual place after Japan ended China's 10-year reign at the top.

American Donnell Whittenburg finished eighth after being added to the field only hours before when Belarus' Dzmitry Barkalau withdrew. American teammate Danell Leyva struggled on pommel horse and high bar, fading to 17th.

Still, Uchimura remains a man apart. He is Japan's version of LeBron James, a superstar who is a fixture in commercials and in some ways a national treasure. It's a position Uchimura has become well aware of, one he's trying to pay forward as his unparalleled career reaches its peak.

The man who once pledged to keep on chasing excellence to honor those who died in the 2011 tsunami believes his work remains unfinished.

"It's not a one-time performance," he said. "It needs to be continuous. I can only do gymnastics. I'm going to keep doing it to give hope to the people."

Britain's Max Whitlock, a silver medalist last year, appeared ready to make a push early behind a masterful pommel horse routine only to miss a connection on high bar and go splashing onto the mat. The misstep cost him a shot at the top three, a rare disappointment during a championships in which both the British men's and women's program reached the medal stand.

Whittenburg struggled through qualifying and wasn't pushed into the field until early Friday. The 21-year-old did just fine on short notice, his only real misstep coming on vault -- typically one of his strongest events.

"I just wanted to come out and do gymnastics," he said. "I didn't really think about it."

Leyva, the bronze medalist behind Uchimura at the 2012 London Olympics, was fourth in qualifying but never got on track in the finals. He muscled through a rough pommel horse routine and bailed in the middle of his high bar set on his 24th birthday.

Three years after bolding proclaiming he was aiming for Uchimura, Leyva hasn't made the kind of inroads he expected.

Then again, neither has anyone else.