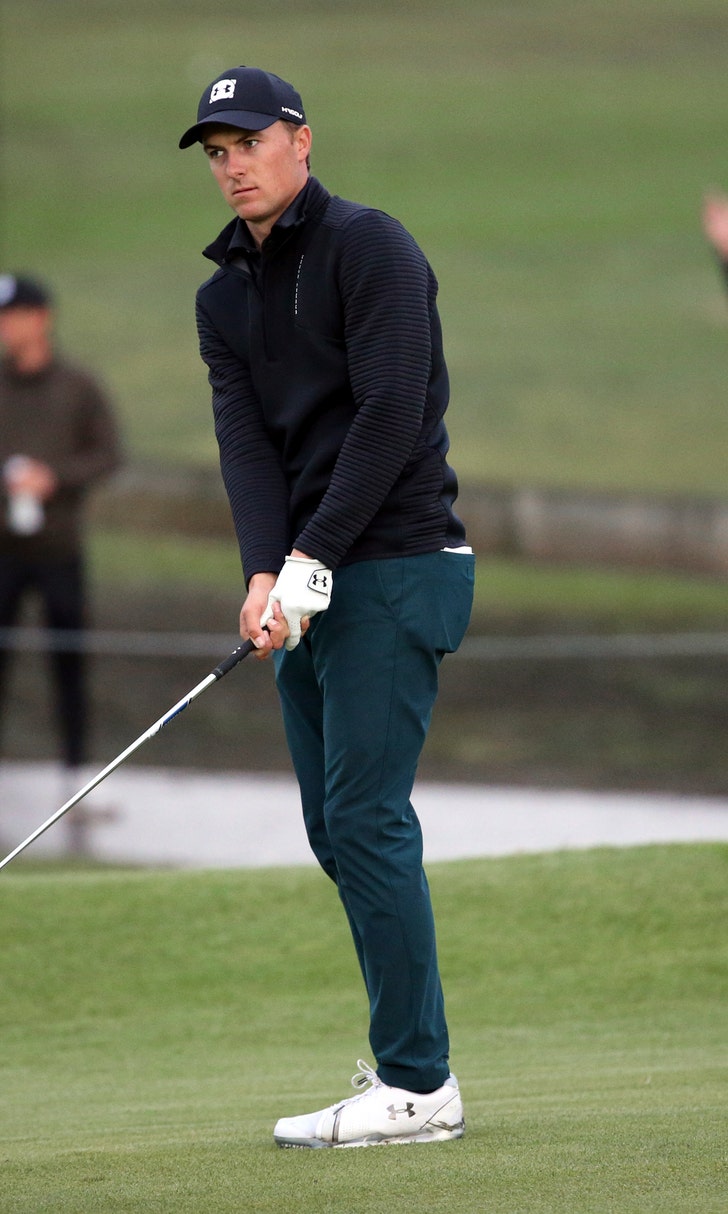 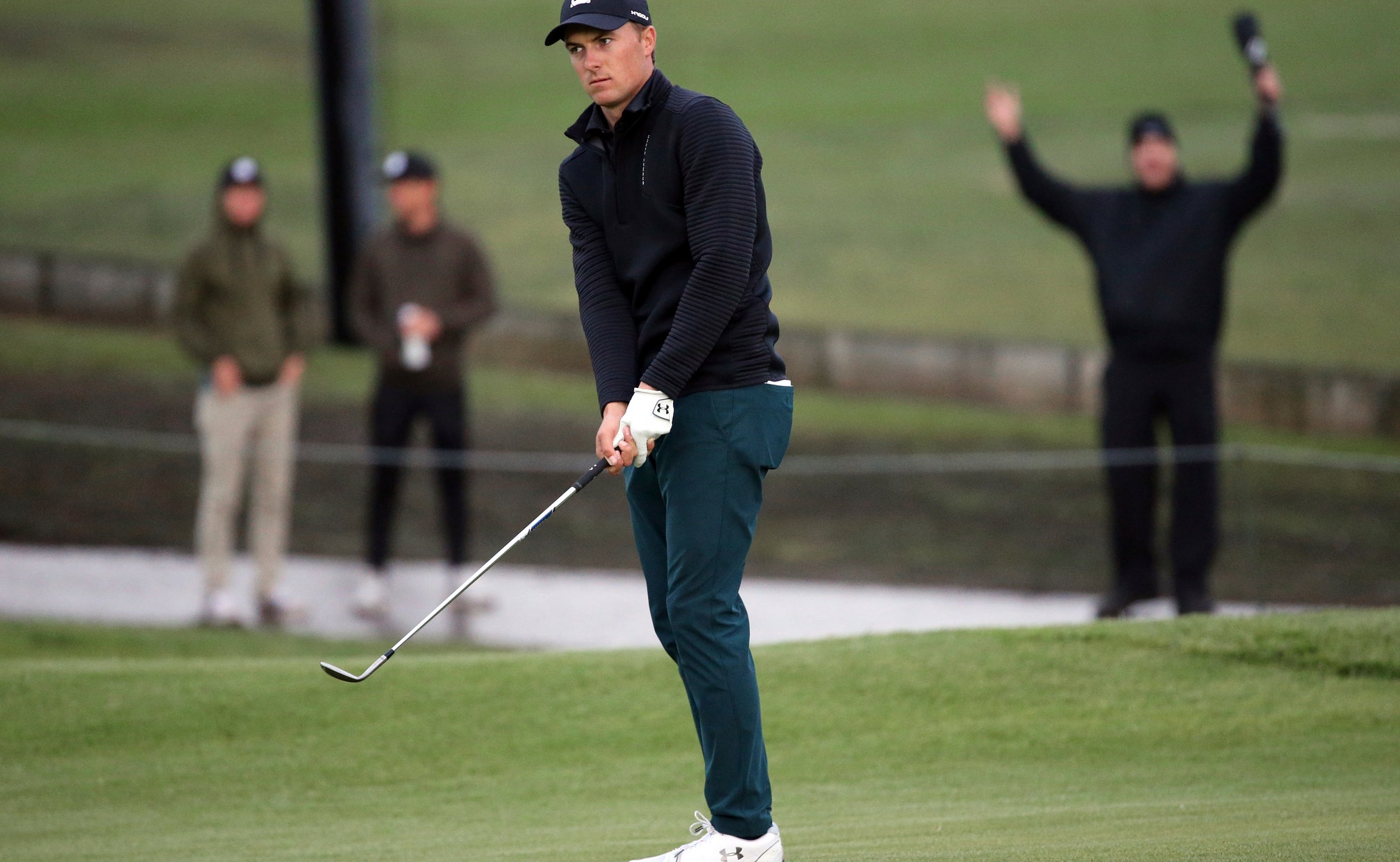 previous story
As betting widens, NBA teams positioning to cash in
next story
Roberto Osuna to close for Houston Astros

LOS ANGELES (AP) — Justin Thomas was playing well enough to want to keep going, with six birdies in a seven-hole stretch before it was too dark to continue Friday at the Genesis Open.

It also was raining.

And he already had been slogging through Riviera for nine hours.

"It's hard playing 30 holes, but it's really hard when it's raining and it's soft," Thomas said after making 14 birdies on a long day that sent him home tied for the lead with Adam Scott at 10-under par. "My legs are tired, so I just need to go home and rest and get some food and try to go to sleep early as I can."

Thomas, who opened with a 5-under 66 in the morning, was 5 under for his second round through 12 holes. He had an eight-hole stretch when he didn't make a par (six birdies , two bogeys), ending with a two-putt par on No. 3.

Scott was in the group right behind him and just as efficient, also opening with a 66 and reaching 5 under. His only blemish was a long three-putt for bogey on the par-5 17th on a course he loves. Scott won at Riviera in the rain 14 years ago, a tournament that was cut short to 36 holes and decided in a playoff.

"I just got the momentum going and I kept it going," Scott said.

Tiger Woods had a few big moments that didn't last long. He had four straight birdies around the turn in the morning, a streak that ended with a three-putt bogey at No. 12. He had four three-putts in the first round for a 70.

His highlight in the afternoon, as the temperatures and rain became steady, was a 45-foot eagle putt on the par-5 first to start his back nine. It really was an Instagram moment , for a fan screamed out, "Make this! It's going on Instagram!" Woods delivered, only to bogey the next two holes to end his day at even par for the second round, 1 under for the tournament.

"I'm stiff right now," Woods said after playing the most number of holes in one day since his return from a fourth back surgery. "It got pretty chilly toward the end. The ball wasn't going very far."

No need telling that to Thomas. He was in the right rough after hitting driver 260 yards, leaving him 222 yards to a back pin on an elevated green. He pounded 5-wood to 10 feet and made his last birdie of the day.

J.B. Holmes was another shot behind at the turn. Holmes was the 18-hole leader thanks to a hole-in-one on the par-3 sixth hole, followed by a birdie that led to an 8-under 63. At the time, he was one shot ahead of Jordan Spieth, who played all of six holes on Friday to complete his bogey-free 64 in calm conditions.

Spieth figured it would be like that all day. He was wrong. Light rain fell as Woods, Thomas and Rory McIlroy (3 under through 12) were finishing the first round. It never really stopped the rest of the day.

The start of the tournament was delayed seven hours Thursday, so just about everyone who makes the cut will face long days at some point. The second round resumes at 7 a.m., and the other half of the field starts their second round at 7:40 a.m. The cut figures to be made Saturday afternoon, leaving no more than about two hours of play the rest of the day.

Those in or around the lead after 36 holes can expect to go 36 more on Sunday. Dustin Johnson played 36 holes on Sunday when he won the Genesis Open two years ago.

Long before it was getting dark, Holmes could see just fine when he hit 8-iron to the back pin at No. 6, located just to the left of the bunker in the middle of the green.

"Hit it exactly how I wanted it and it went in," Holmes said. "It looked good the whole time."

Spieth took advantage of the restart on Thursday. His opening shot on the par-4 10th hit the cart path twice and went into shin-high grass so thick that it would have been hard work just to get it out. The round was scrapped and he returned for a routine par.

He made the rest look easy except for the 13th hole, where he hooked his tee shot into a eucalyptus tree, played a slice on the outer side of the trees and got up-and-down for par.

"It was probably better than any of the birdies," he said.

He holed two chips for birdie, one of them on the toughest hole at Riviera on No. 12, birdied all three of the par 5s and made a pair of birdie putts from about 10 feet when he returned Friday morning.

He said those six holes were the best the putter has felt in some time.

"I was able to kind of figure out a way to feel some freedom in the stroke and I was able to roll a couple of those in," he said.

Woods is the tournament host with his foundation running the event he first played in 1992 as a 16-year-old amateur. Next year, the tournament gets elevated status on par with the Memorial (Jack Nicklaus) and Arnold Palmer Invitational by offering a three-year exemption to the winners, getting a 120-man field and offering $9.3 million in prize money.

But the course has never been kind to him. Riviera is where Woods has played the most times as a pro (9) without ever winning.