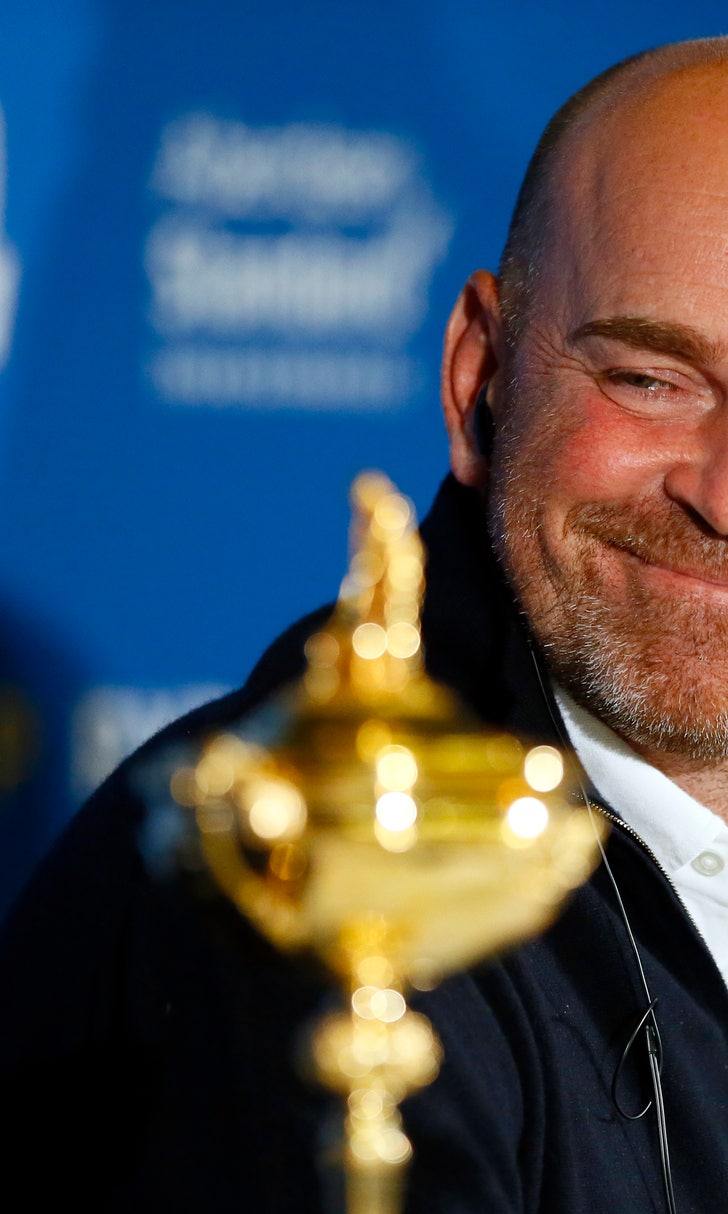 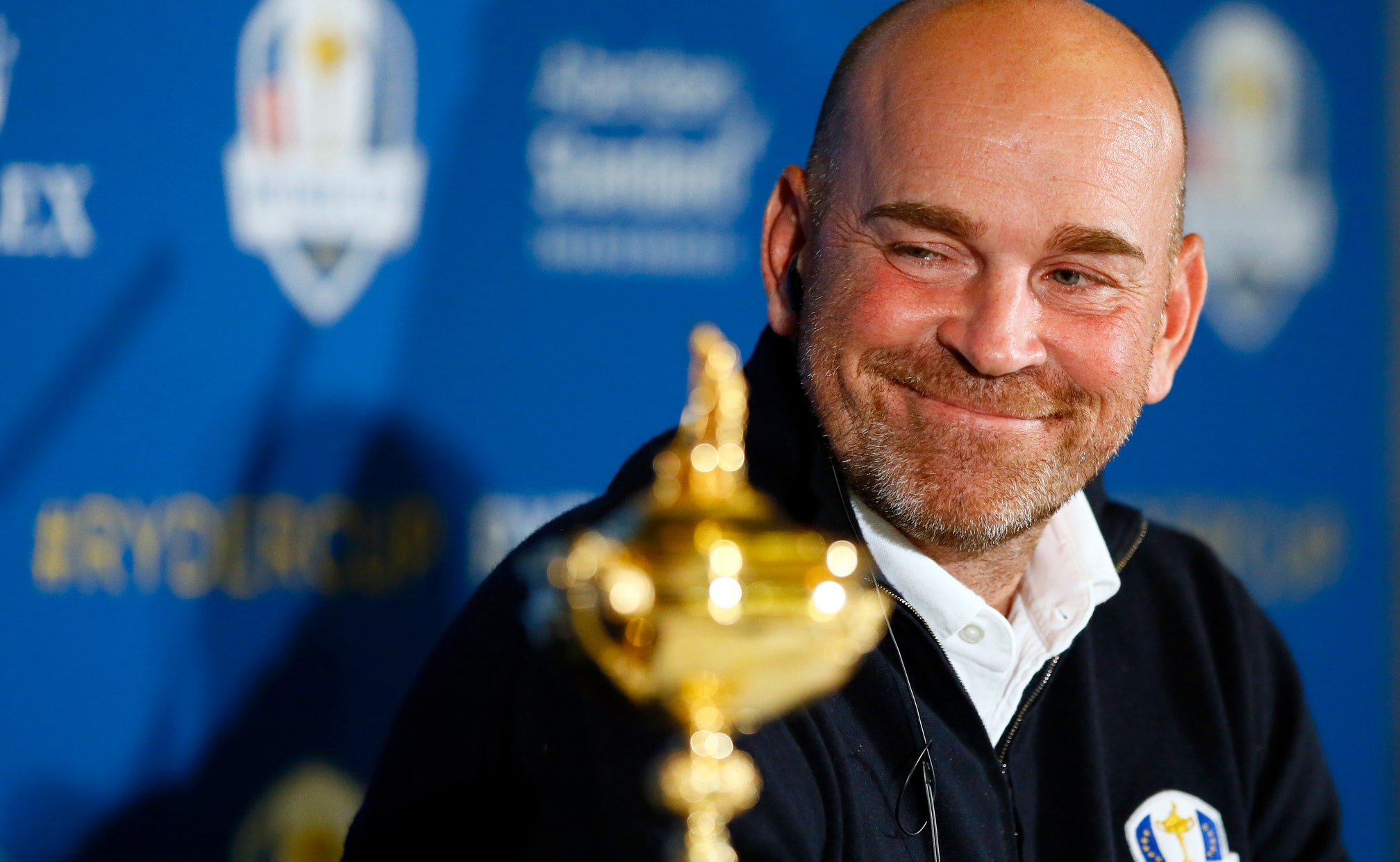 The captaincy of Europe's Ryder Cup team has taken Thomas Bjorn to places he never could have imagined.

To the Elysee Palace for breakfast with the French president. To Val d'Isere to hit some golf balls from a mountain top. To the home of a delusional fan in southern England.

He has lain awake in the middle of the night, weighing wild-card picks and strategy.

Flights to all corners of the globe to check out his players' form.

Bjorn is one of European golf's elder statesmen, inside the ropes and the boardroom. He still had not fully appreciated just how all-consuming the captain's role — something he has described as a "lifelong dream" — would be.

Not that he'd change his position for anything else.

For the "Great Dane," next week outside Paris will be the high point of a golfing career that has included 17 victories worldwide. While a major championship is not in that total, Bjorn most famously was on the cusp of the claret jug until it took him three shots to get out of a pot bunker on the 70th hole at Royal St. George's in 2003, paving the way for Ben Curtis to win the British Open.

That earned him respect right across the tour, and will have sharpened his organizational and man-management skills that are so important for a Ryder Cup captain.

"He is the most qualified person for the job," said Paul McGinley, whose captaincy of Europe at Gleneagles in 2014 was widely praised for its thoroughness.

Bjorn is a proud man who reached as high as No. 17 in the world and remains the only man to play 72 holes with Tiger Woods and beat him. That was in 2001 in Dubai, where he outplayed Woods a month before the American — at the peak of his career — won the Masters to complete the "Tiger Slam."

There is mutual respect with Woods, as there is with most players who have encountered Bjorn. But it can take time.

"Thomas and I didn't get off to a very good start," Rory McIlroy said with a sheepish grin.

They played together in the 2007 Madrid Masters, where McIlroy was 18 and in his third event as a pro, and the youngster was unaware of certain courtesies.

"I was a cocky 18-year-old, he was a veteran. I might have shown a couple of bits of bad etiquette from time to time, and Thomas let me know about it," McIlroy said. "And then we hugged it out the next week on the range in Portugal, and we've actually been really good friends ever since. Thomas is very principled, he always tries to do the right thing. For being quite a big, sort of intimidating character, he's actually quite sensitive.

"He's going to be a great captain."

Once one of golf's more volatile players — some gave him the nickname "Semtex" because of his explosive temperament — the 47-year-old Bjorn has approached the job with a sense of calm and openness. He reached out to the media early, getting to know some reporters over dinner in Abu Dhabi a few weeks after his appointment as captain in December 2016, and has kept fans up to date in a monthly blog that has shown a different side to him.

To people who know him well, he is a new man.

"When he was younger, he would never have got this kind of a job," said Torben Nyehuus, the captain of Denmark's amateur golf team and a good friend of Bjorn's since they grew up together in the northern town of Silkeborg.

"He was so focused on himself and his own game. But I spoke to him a few weeks ago, and I have seen him some times over the past year, and you can see he is more relaxed. The players will enjoy being captained by him."

Bjorn said in an interview with The Associated Press that he'll do much of his work in the background in Paris.

"I don't lead in a way of being a guy that it's about me, about me standing at the front, and me shouting about how it should be," Bjorn said. "I lead from behind and I push (the players) forward. It's their moment to shine. It's their Ryder Cup."

Despite being close to the last two captains of Europe, McGinley and Darren Clarke, Bjorn was determined to forge his own path as team leader and, in particular, stay true to himself on his Ryder Cup journey.

To some, picking the out-of-form Sergio Garcia and the recently injured Henrik Stenson as two of his four wild cards flew in the face of a previous assertion by Bjorn that he would let "no friendship or sentiment" affect his thinking. More in-form players like Matt Wallace or Thomas Pieters might have felt hard done by, but Bjorn believed he needed to add more experience to a team already containing five rookies.

It was an understandable, albeit conservative, call from Bjorn. As was the selection of Robert Karlsson, Luke Donald, Padraig Harrington, Graeme McDowell and Lee Westwood as his vice captains, leaving no room for a Frenchman for the first Ryder Cup to be staged in France.

"His thought processes and what he said and what he was thinking felt spot on to me," Harrington said about Bjorn's behind-the-scenes work as a vice captain in Hazeltine in 2016. "So he fully understands what he needs to do."

Nyehuus expects to see plenty of emotion from Bjorn in Paris. Even a return of that fiery temper at times.

"He was always one of the few guys who could use it for a better goal," Nyehuus said.

Bjorn is heading to the French capital with no regrets.

"I feel like I've got most things that I could have under control now," Bjorn said. "In my head, I am pretty comfortable where I am."