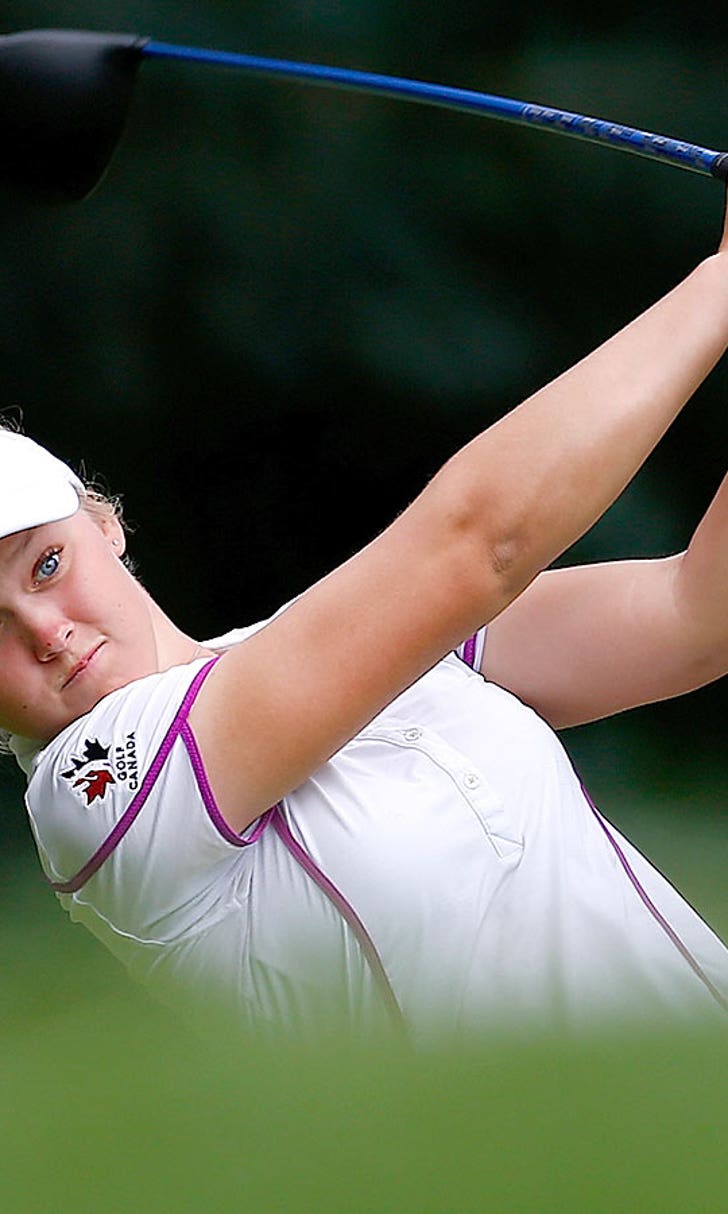 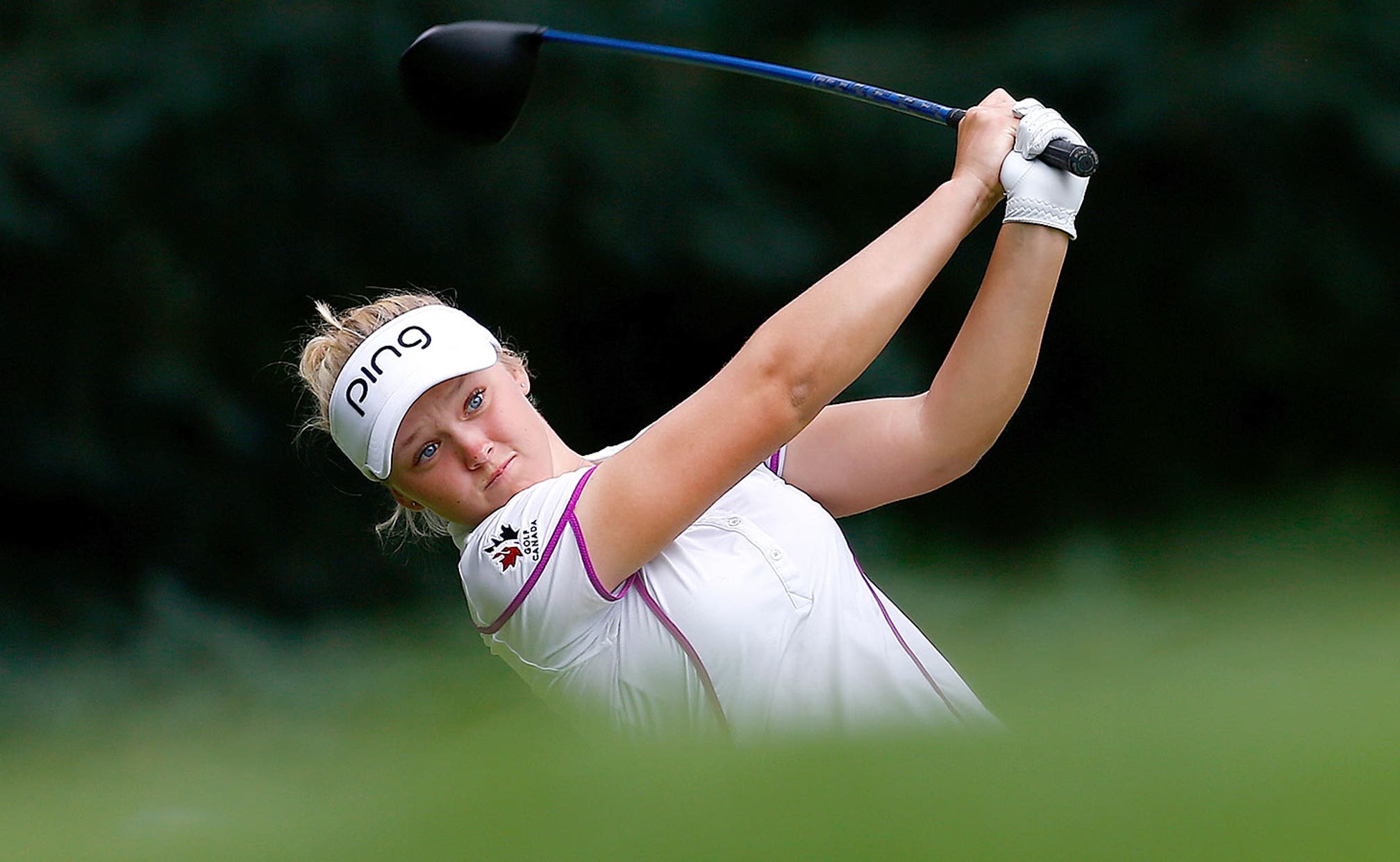 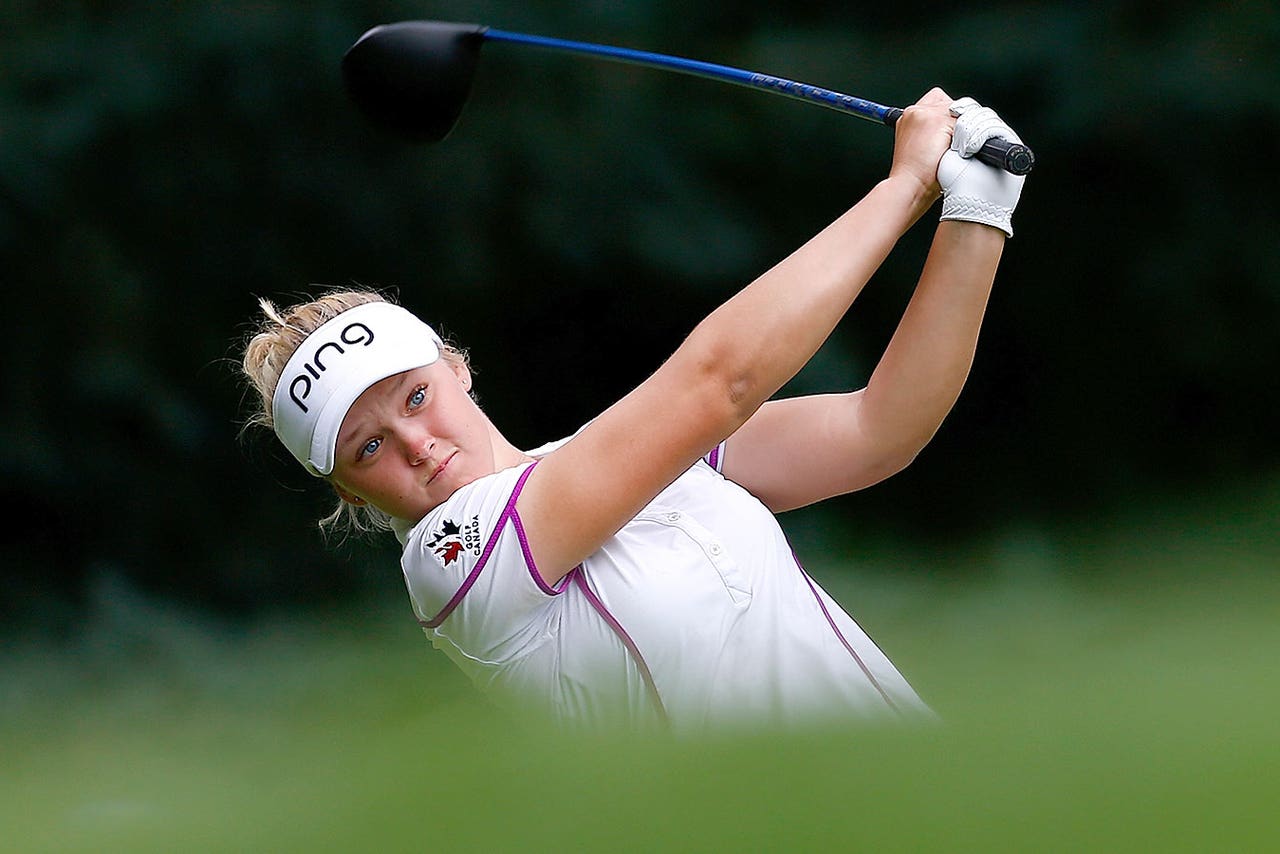 Brooke Henderson gave herself some breathing room in her bid for a breakthrough victory.

The 17-year-old Canadian opened a five-stroke lead Saturday in the Cambia Portland Classic, shooting a 7-under 65 at Columbia Edgewater.

"To get a good round together and try and increase my lead, and definitely just hit good shots. I'm really happy to get it to (18 under), and hopefully tomorrow just improve on that just a little bit," Henderson said.

She's trying to join Lydia Ko and Lexi Thompson as the only players to win an LPGA Tour title before turning 18.

On a warm, calm day, Henderson made seven birdies in her bogey-free round. Henderson, who turns 18 in September, tied the tournament 54-hole record of 18-under 198 set by Yani Tseng in 2013. The five-stroke margin is the largest third-round lead on the LPGA Tour this year.

Morgan Pressel was second after a 65.

Henderson, from Smiths Falls, Ontario, also had the 54-hole lead in April in California in the Swinging Skirts LPGA Classic. She closed with a 74 and ended up finishing third. She'll be banking on that experience Sunday.

"Saturday I wasn't feeling the nerves, and then Sunday I did. I'll just have to be aware of that tomorrow," Henderson said. "It was interesting in San Francisco. I learned a lot about myself and my game, and I think I've come leaps and bounds from there early in the season."

The Canadian won the Symetra Tour's Four Winds Invitational in June in Indiana, and tied for fifth in the Women's PGA Championship -- the second of the LPGA Tour's five majors.

A win Sunday would assure Henderson of finishing among the tour's top 40 on the money list, giving her an LPGA Tour card for next season. Through nine LPGA Tour tournaments, Henderson has made $466,818. LPGA Tour Commissioner Mike Whan denied Henderson's age petition last year, preventing her from playing Q-school. She earned a spot in the Portland Classic field in Monday qualifying.

Henderson is attempting to become the second Monday qualifier to win an LPGA Tour tournament. The only player to accomplish the feat was Laurel Kean in the 2000 Rail Classic.

Had it not been for Henderson's older sister, Brittany, there's a chance none of this happens. Brittany received a sponsor's exemption for the Portland Classic, and Brooke decided to take a chance on the Monday qualifier after running out sponsor's exemptions.

She was asked if she would have tried to qualify without Brittany in the field.'

"I don't know," Henderson said. "I think it was a blessing in disguise that she's got the sponsor's invite and I came out here, because it is a long way to travel from home, and I'm not sure I would have made the trip."

Henderson pulled away on the back nine, starting with birdies on the par-5 10th and par-4 11th. Masson bogeyed the par-5 12th, giving Henderson a four-stroke lead. Even though Pressel birdied three of her final four holes, Henderson increased her lead to five strokes with birdies at the par-4 15th and par-3 16th.

On Sunday, Henderson will play alongside Pressel. The two played in Sunday's final group when Henderson had the 54-hole lead at Swinging Skirts.

"Brooke is a great player. I mean, to Monday qualify and obviously be playing this well, she knows what's at stake for her. She's a great girl, and she has a lot of potential, for sure," Pressel said.

Pressel, who made nine birdies during her second and third rounds, says she'll have to stomp on the gas again if she's to have a shot at catching Henderson.

"I'll take another nine birdies tomorrow," Pressel said. "I need to just give myself a lot of opportunities and eliminate the sloppy mistakes that I've made the last few days."

German players Sandra Gal (65) and Caroline Masson (70) were tied for third 12 under.