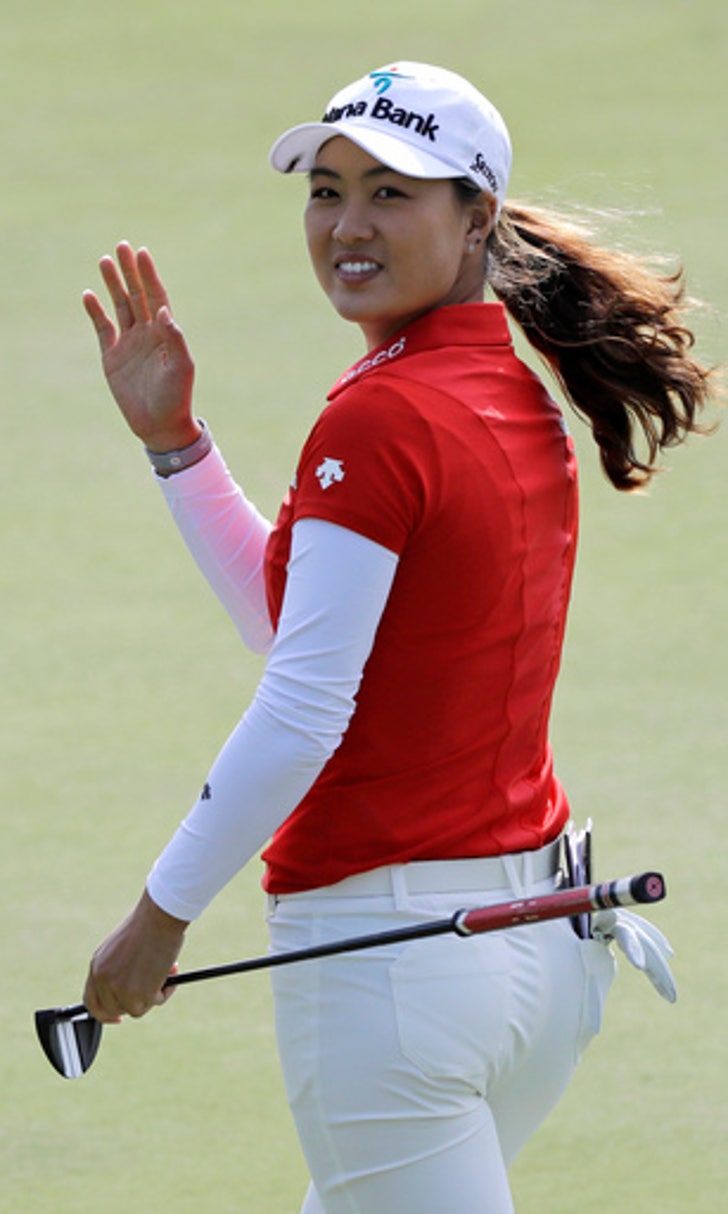 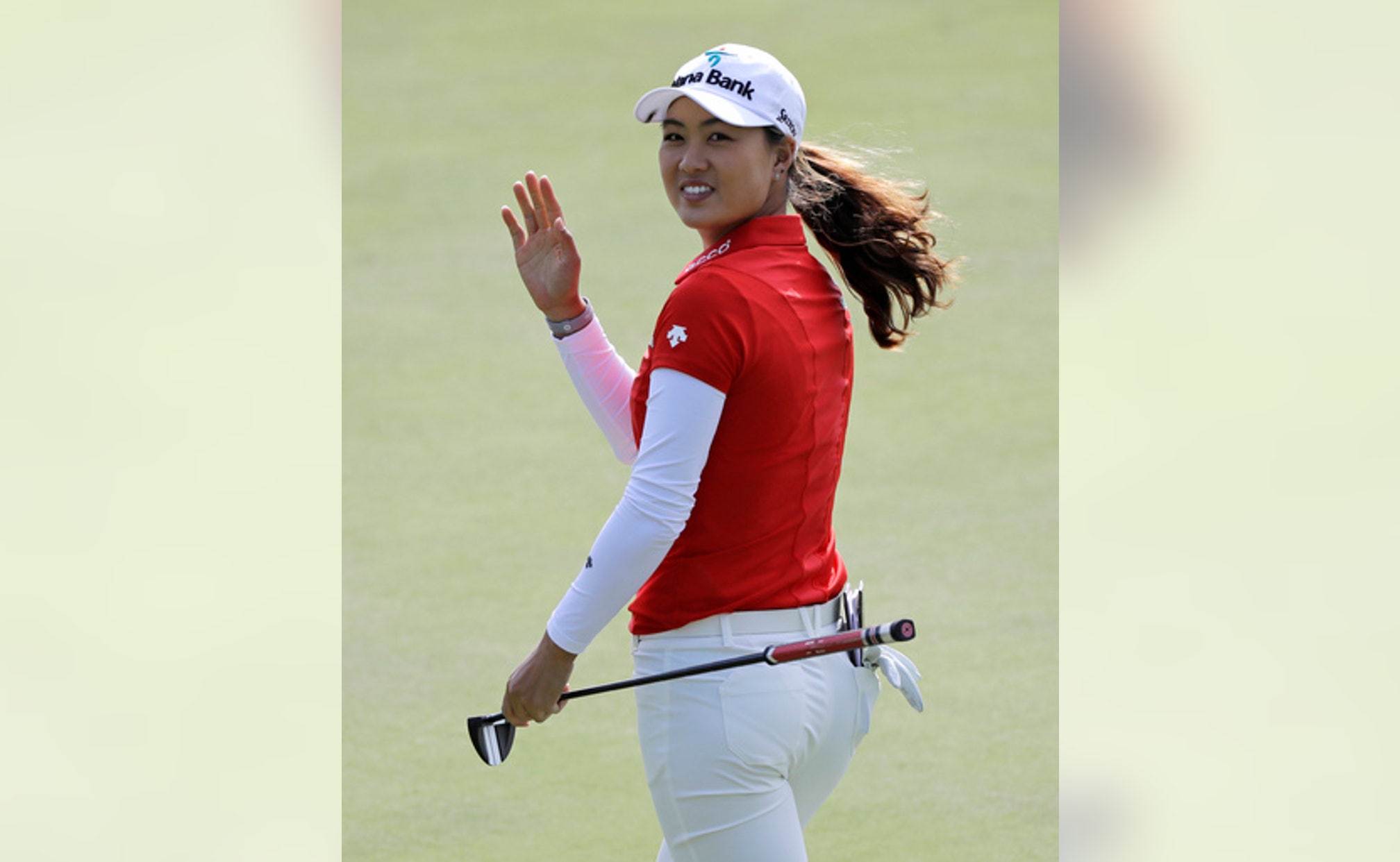 INDIANAPOLIS (AP) Lexi Thompson celebrated in the most traditional Indy style. She sipped some milk, poured the rest over her head and, of course, sealed it with a kiss of the bricks.

The 22-year-old Florida player earned it.

After dazzling fans with two days of almost error-free golf, Thompson overcame some late bobbles for a four-shot victory over Lydia Ko on Saturday in the inaugural Indy Women in Tech Championship.

Thompson closed with a 4-under 68 to finish at 19-under 197 at Brickyard Crossing, the Pete and Alice Dye-designed course that weaves around and inside the famed Indianapolis Motor Speedway.

''Kind of regretting it now because I feel really gross,'' Thompson said, referring to the first milk bath by a female champion in Indy history. ''Then I went around the track in a Corvette Stingray, which I also have one there at home. It was just an amazing experience. That made my day right there.''

Shortly after collecting the Waterford crystal trophy and the champions' wreath on the 18th green, Thompson was driven to the track's start-finish line where she kneeled down in front of cameras and kissed the bricks. Then, after taking a quick sip, the slightly hesitant player doused herself in almond milk.

The only items that were salvaged were the shoes she wanted for The Evian Championship, the final major of the season next week in France, and her sunglasses that she handed to someone.

''Here goes this outfit,'' Thompson said with a laugh before posing for more photos with a streak of milk running down her nose.

She didn't notice - or mind - after a dominant weekend put her in position to jump from third to second in the world ranking.

Thompson won her ninth career LPGA Tour title and became the fourth player - and first American - with multiple wins this season. She also won the Kingsmill Championship in May in Virginia. In April in the major ANA Inspiration in the California desert, she lost a playoff to So Yeon Ryu after being penalized four strokes for a rules violation reported by a television viewer.

Ko had a chance to end a 14-month winless streak, but the 20-year-old New Zealander couldn't keep up with Thompson over the final 10 holes.

The low scores that seemed like such a breeze the first two days mostly disappeared in the heaviest wind of the weekend. It showed.

While Thompson had six more birdies Saturday, she also had two back-nine bogeys and had to scramble to avoid more trouble.

Ko, who had only one bogey during the first two rounds, wound up with a bogey and double bogey in a closing 72.

''Lexi played great,'' Ko said after her best finish since April. ''She had some 3- or 4-footers for par and she made all of them, so it just shows you how much confidence she was playing with. But it was great being in this position.''

Nobody else really contended.

Candie Kung started the day a shot behind Thompson and Ko, but finished with 74 to tie for fifth at 15 under. Minjee Lee wound up third at 14 under after a 67. Iceland's Olafia Kristindottir (68) was another stroke back.

For the first eight holes, it looked as if Thompson and Ko would turn it into a match-play event.

They matched pars on No. 1 and birdies on No. 2. Thompson, the first-round leader after a 63, regained the outright lead when Ko bogeyed the par-3 third. But Ko birdied the par-5 fifth to tie it again, at 16 under, and it stayed that way until Thompson birdied Nos. 9 and 10.

''I had a three-putt on the third hole and that was my first three-putt of the weekend,'' Ko said. ''I tried to bring it back, but I just wasn't putting as well today as did the other couple of days.''

Thompson's biggest obstacle the rest of the way was herself.

She bogeyed the par-4 11th and gave back another stroke after hitting her tee shot into the water on No. 16. She nearly gave away another at No. 17 when her second shot rolled through the green.

But she rebounded with a birdie at No. 18 to kick off the post-tourney party.

''I was trying to comprehend that on the car ride over. I was like, what?'' Thompson said when reflecting on her gender-breaking win at Indy. ''It was a huge honor to be here in Indiana, to be able to kiss those bricks - definitely a memory that I'll never forget.''