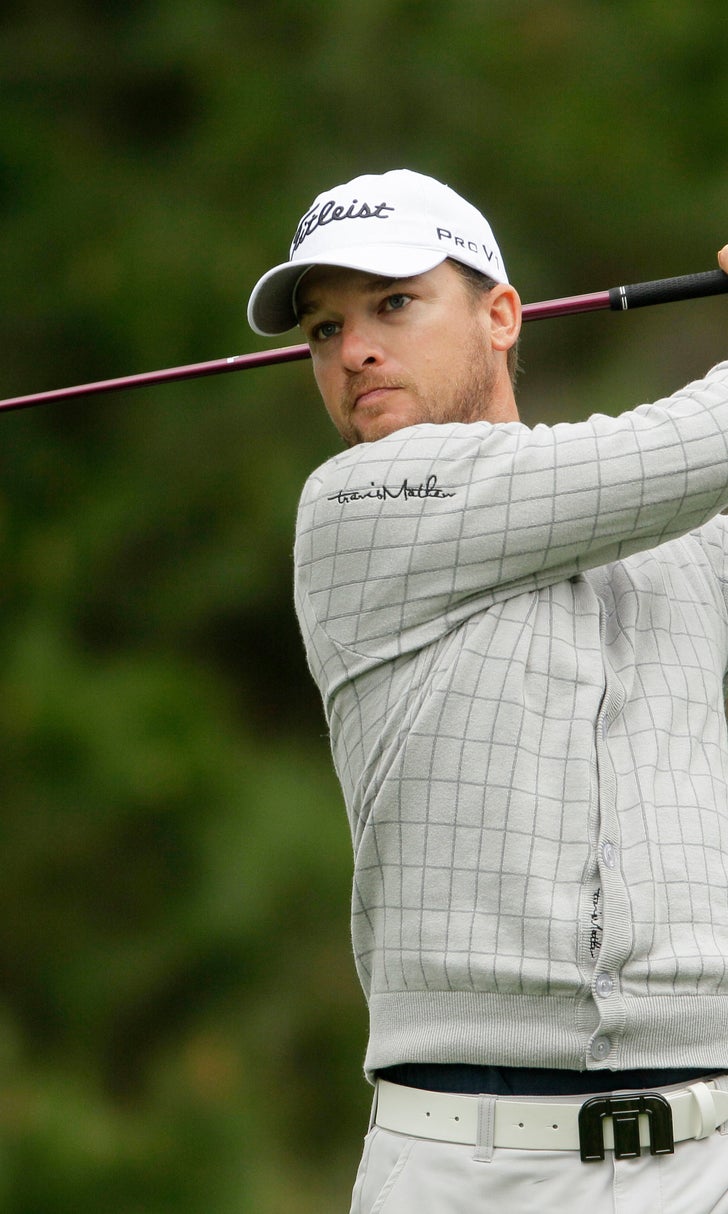 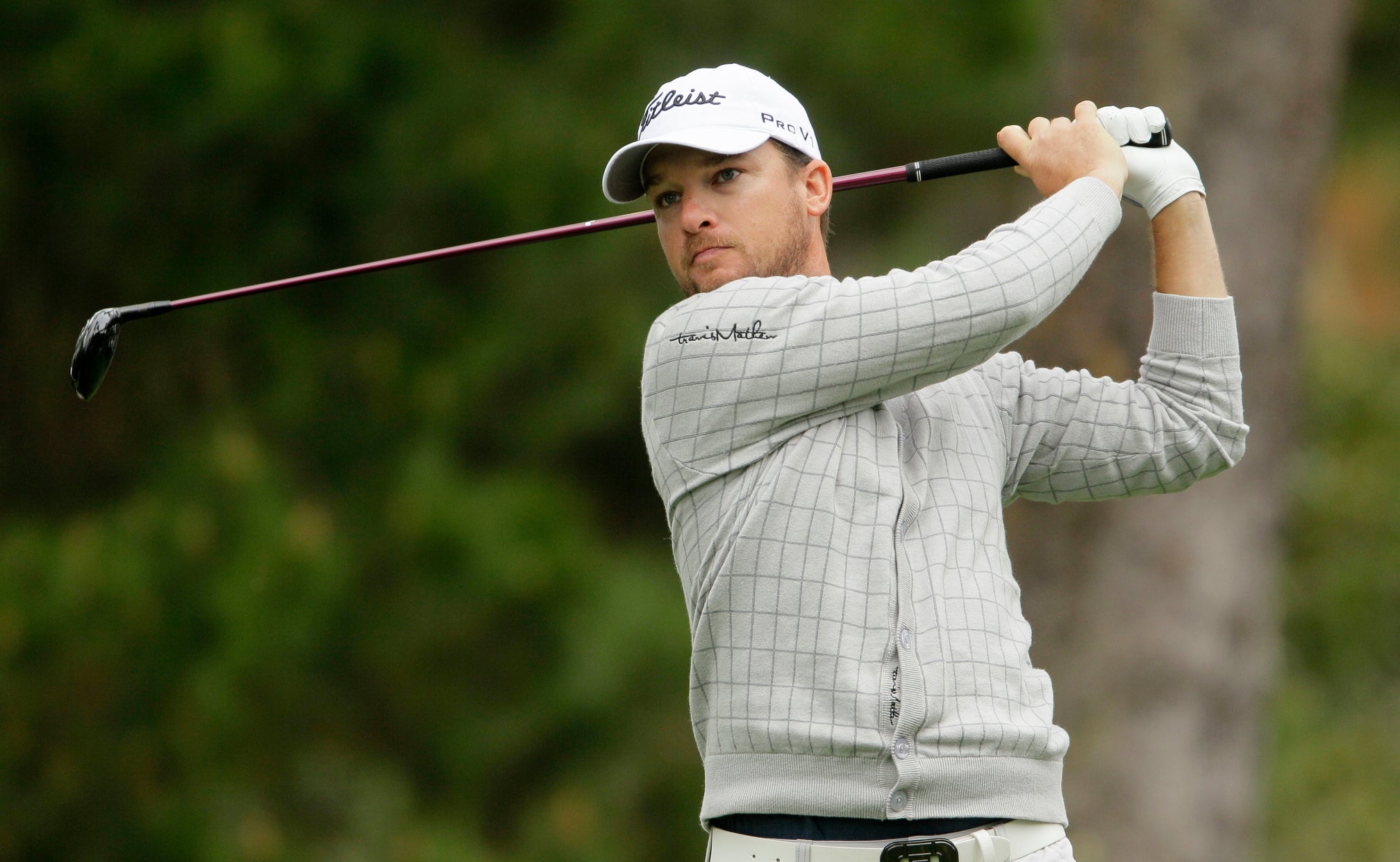 Kyle Thompson among 5 golfers to visit troops in Africa

Right about the time Kyle Thompson was ready to abandon his struggles on the PGA Tour, he jumped at a chance to give back.

Thompson was on the practice range at the Wyndham Championship, where the only way to keep his full card was to win, when he received an email from the PGA Tour looking for players who wanted to travel to Djibouti, Africa, in December to visit the troops.

"The email said the first five who want to do this trip to Africa get to go," Thompson said. "Before talking to my wife, I said, 'I'm going.' I come from a big military family, and I thought it would be really neat."

It lived up to his expectations.

Thompson joined David Hearn of Canada, Kris Blanks Shaun Micheel and Billy Hurley III, a surface warfare officer in the Navy and the only player from a service academy to win on the PGA Tour.

They met with the troops at Camp Lemonnier, a forward deployed military base in a country on the Gulf of Aden that shares a border with Somalia, Ethiopia and Eritrea. They saw the operations, gave a golf clinic and individual lessons to anyone who wanted them and even had a trivia night. It was part of the tour's "Birdies for the Brave" program. This trip was mainly about boosting morale and showing support.

"Not one person was unimpressive," Thompson said. "The coolest thing was a lot of these guys were in the reserves. The commanding officer works for Dell. The No. 2 guy works at Booz Allen. And they've been stationed over there for a year."

Thompson's military history runs deep. His grandfather was wounded on Omaha Beach during the D-Day invasion, which is how he met his wife, a nurse. Five of their 11 children served in the military. His maternal grandfather was a prisoner of war in a Japanese camp during World War II.

The other players also had military connections. Blanks grew up on military bases until he graduated high school. Hearn's grandfather was in the Canadian Army during World War II. Micheel's father was a cryptologist who worked on behalf of the Air Force Security Service.

Thompson was overwhelmed by the operation, and thankful to have Hurley along to explain.

"They speak in acronyms that go over my head," Thompson said.

Thompson returned home to a future that won't include much golf. He decided to retire after making just two cuts this year. It was his third full season on the PGA Tour, and Thompson failed to keep his card each time. With three kids (ages 9, 7 and 2) and a wife who has endured Thompson grinding away in a sport with no guarantees, the 39-year-old didn't want to lose any more time with them. He starts a job as an insurance broker in January.

"This golf thing is stressful," he said. "I'm done with golf, to be honest with you. I'll be a part-time pro golfer."

Unless, of course, the tour calls offering another trip to be with the troops.

"If ever asked to do it again, I'd drop everything in a heartbeat," he said.

Ian Poulter, the last man into the Masters this year, won't have to wait until the final week to make plans for Augusta National. He was among 13 players who earned an invitation by finishing the year among the top 50 in the world ranking.

That brings the field to 79 players who are expected to compete, one fewer than at this time a year ago. And it virtually assures the club of having fewer than 100 players at the Masters, which Augusta National prefers.

Players can get into the Masters by winning a PGA Tour event that offers full FedEx Cup points or through top 50 in the world ranking on March 31, the week after the Dell Match Play in Austin, Texas.

In the five years since the PGA Tour went to a wraparound schedule, players have earned a Masters invitation by winning early in the year only 19 times out of 65 opportunities. Russell Henley did it twice (Honda Classic in 2014, Houston Open in 2017). Matt Every did it in consecutive years at the same tournament (Bay Hill).

PGA Tour Live, the direct-to-consumer subscription video service that offers live streaming of featured group, is beefing up its product and will be part of NBC Sports Gold starting in January. The cost for the year is $49.99 (or $9.99 a month) if bought by Jan. 20. After that, a season pass goes for $64.99.

The product will have double the amount of hours and more than twice as many supported platforms compared with 2018, along with expanding live coverage to all four days at 27 tournaments outside of the majors. It also will such features as 10-minute "speed round" recaps for featured players, Shot Tracer on every hole on the golf course and integrated scoring and statistics.

BACK IN THE CROWD

Keegan Bradley ended more than six years without a PGA Tour victory at the BMW Championship, and there were plenty of low points along the way.

The biggest was not being invited to dinner for prospective Ryder Cup players in late February.

Sure, it hurt to be left off the last four U.S. teams in the Ryder Cup and Presidents Cup. He had to go through U.S. Open qualifying the last two years (made it both times), and it really stunk to be home the first full week in April instead of playing in the Masters in each of the last two years.

But there was one moment when it hit him just how far he had fallen.

"There was a point as early as last year, even two years ago, I was involved in some of the Ryder Cup meetings. I was invited," Bradley said. "This past year at one of the tournaments, I heard a couple guys talking and I realized I wasn't even invited — nor did I deserve to be. It was like, 'Wow. I've come pretty far there.' Now I'm not in the conversation. Those times hurt."

Thanks to "PGA Tour Live" streaming featured pairings, the PGA Tour has on video all 59 of Brandt Snedeker's shots from the Wyndham Championship. It is the only sub-60 round in PGA Tour history with video of every shot. In other cases, cameras didn't pick up a player until the middle of his magical round. ... The 3M Open in Minnesota got its first big commitment when Bryson DeChambeau said he would play next summer. The inaugural tournament at the TPC Twin Cities is July 4-7, two weeks before the British Open. ... The BBC awarded British Open champion and Ryder Cup star Francesco Molinari with its "World Sport Star of the Year" last week. The main award is "Sports Personality of the Year," which went to Welsh cyclist Geraint Thomas. Only two golfers have won SPOTY — Nick Faldo in 1989 and Dai Rees in 1957.

Brooks Koepka is the sixth straight player to end the year at No. 1, a streak that began with Tiger Woods in 2013.

"Never watched it. I'd rather buy two shares of General Electric and invest those and have a long-term investment than pay $20 to watch that." — Greg Norman, on the pay-per-view match between Tiger Woods and Phil Mickelson.