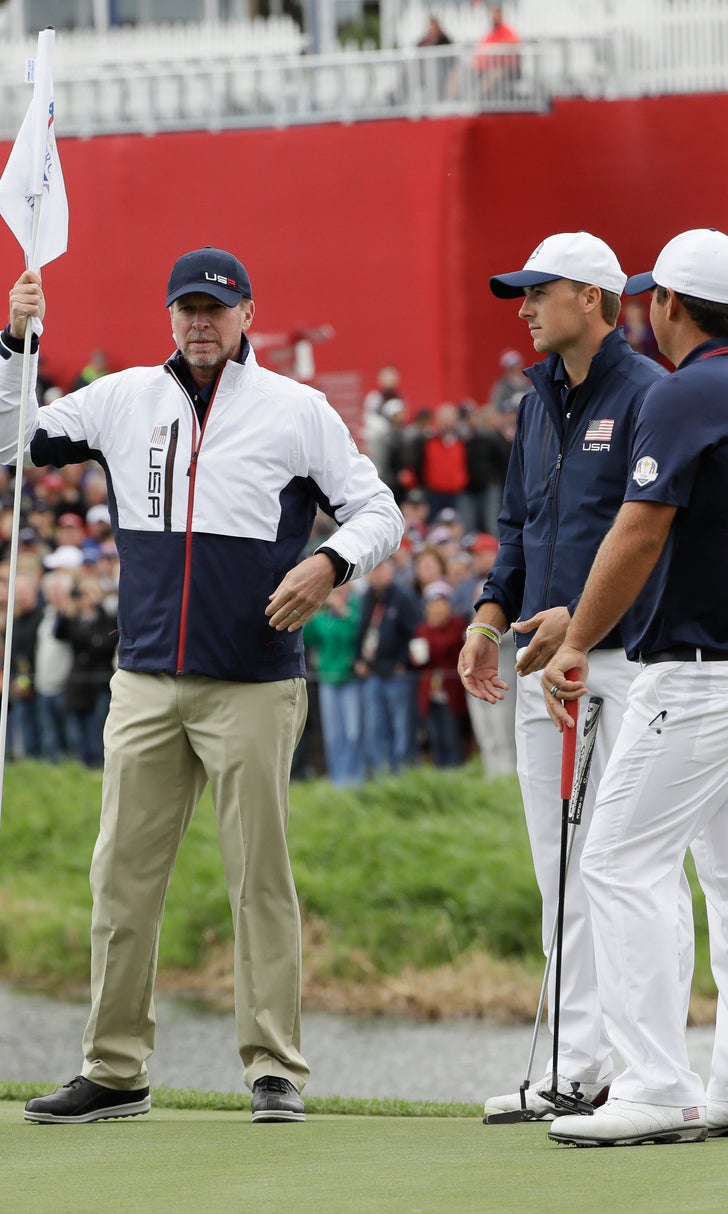 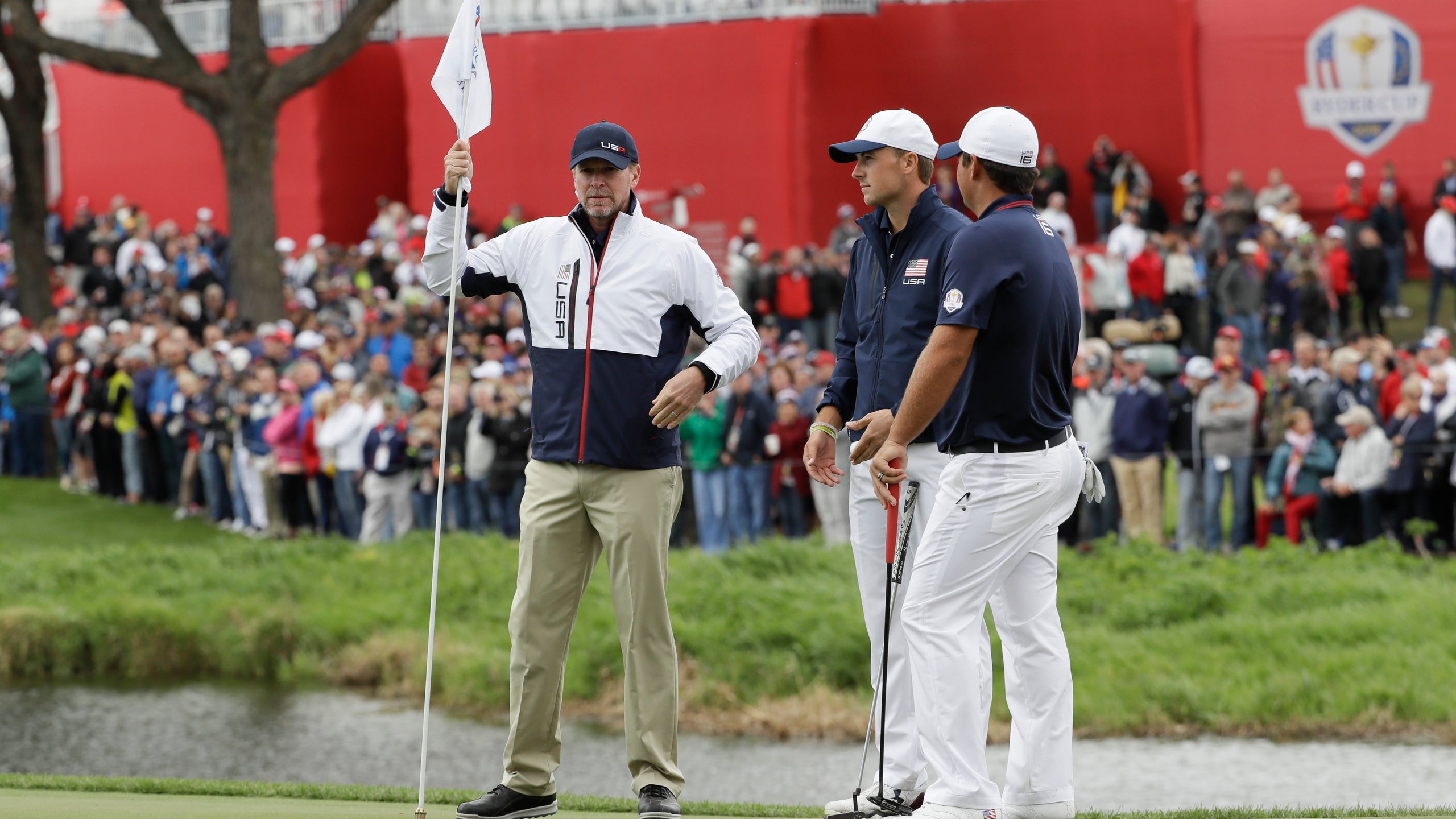 previous story
Wilder-Fury 2 off for now, according to WBC
next story
76ers C Marjanovic out with bone bruise, sprain

This was two days before a long Wednesday of news conferences, radio shows, everything short of a parade in his home state of Wisconsin, where in 2020 he will lead the American team at Whistling Straits in a bid to win back the Ryder Cup.

Still to be determined is whether Reed is part of the team.

That will depend largely on his performance over the next two years, not what happened five months ago in France.

Stricker was going through a media training session ahead of the Ryder Cup announcement when he realized Reed might be a popular topic, at least on the day he was introduced as captain. Instead of preparing the right message for the media, he picked up the phone.

"I figured I was going to get some questions about Patrick and all the stuff that transpired," Stricker said. "All I've seen is what was on social media, some of the golf outlets, things like that. I just wanted to hear from him, the truth from him. He explained himself, and how he thought he messed up at the Ryder Cup, and he wants to move forward. And that he's got everybody's back."

The "stuff" to which Stricker referred made a bad week at Le Golf National seem even worse.

Reed and Jordan Spieth had gone 4-1-2 as partners in the two previous Ryder Cups — 8-1-3 when the Presidents Cup is included. Spieth played this Ryder Cup with Justin Thomas, whom he knows as well as anyone, and they were a rare bright spot for the Americans by winning three of their four matches. Reed played with his idol, Tiger Woods, and they lost both their matches before seeing the 18th hole.

In the now-famous New York Times interview a few hours after the matches were over, Reed blamed Spieth for them not playing together, said captain Jim Furyk was not smart to bench him for two matches and suggested Europe was better at putting team ahead of ego.

Reed says he sent a text to "all the guys" immediately after the Ryder Cup and that everyone except the media has moved on.

Maybe so, but there were sure to be moments when it would be thought of again.

One such time was at Torrey Pines, when Reed and Spieth were in the same group for the first time since the Ryder Cup. There was plenty of attention on the first tee for a group that was eight shots out of the lead. Spieth tried to diffuse the moment by playfully leaning in for a hug with Reed on the first tee. They both laughed. They chatted during the round about equipment or whatever players talk about to kill time between shots.

Friends? Probably not. But they're still teammates.

And it was sure to come up when the next Ryder Cup captain was appointed.

Stricker has a reputation as the nicest man in golf, quiet and respectful, steeped in Midwestern values. His father-in-law once described Stricker as treating an employee in the home improvement store with as much consideration as a corporate executive.

He met his wife, Nicki, when Stricker took a lesson from former Wisconsin coach Dennis Tiziani. Stricker asked if he knew anything about the beautiful lifeguard as they walked by the pool. "That's my daughter," Tiziani replied. They soon had their first date, but only after she called him.

Stricker fought back tears when he was introduced as Ryder Cup captain, and no one was surprised. He does that all the time.

Just don't get the idea he's a softie.

In three interviews last week, Stricker delivered a message of looking ahead instead of behind. That's important to him, and it's important to an American team that suffered a setback in its attempt to build a new model of success for the Ryder Cup.

He was savvy enough to know that any lingering feelings from France should be addressed by talking to a player whom Stricker considers more an asset than a liability.

"That was on my to-do list, to talk to him and see his side of things," Stricker said.

Reed didn't want to reveal all they talked about, although they appear to be on the same page. It's all about moving forward.

"The only thing I shouldn't have done is talked to the media, but I felt like at the time it was the right thing to do," Reed said. "When I talked to him, I just said: 'Hey, man, I want to let you know we've all moved past it. We're a team. I feel like all of us are moving in the right direction. Now we're trying to play as good as golf as we can and try to make the team."