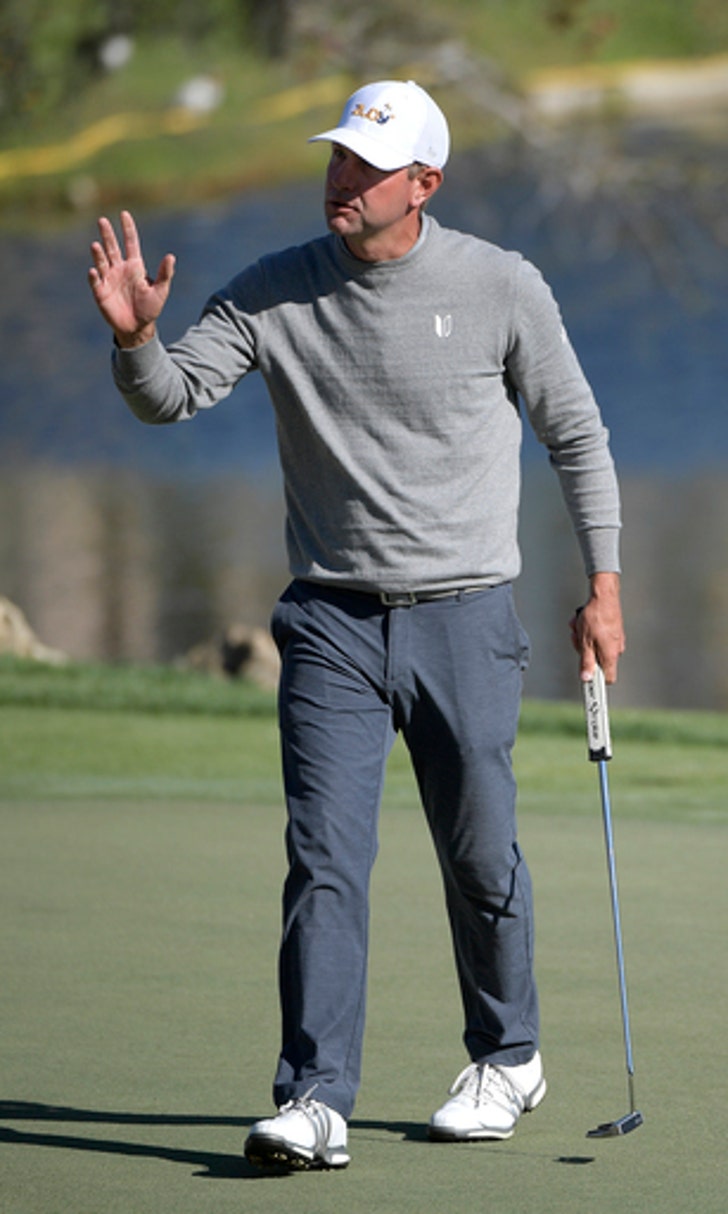 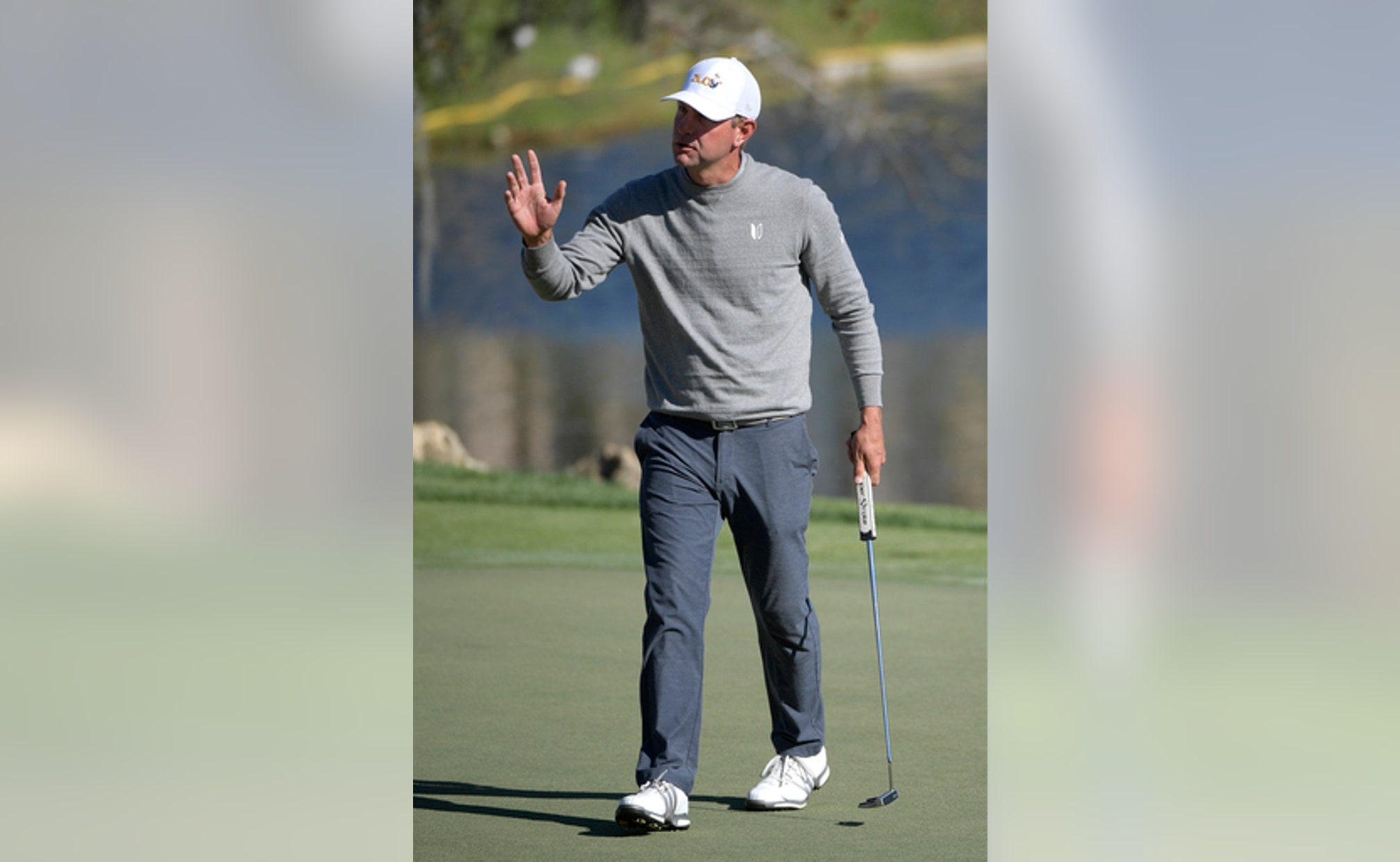 previous story
Painter has Purdue back on track after rough stretch
next story
Beal scores 24, Wizards hold off Bulls for 112-107 win (Mar 17, 2017)

Change in plans working out well for Hoffman at Bay Hill

ORLANDO, Fla. (AP) Charley Hoffman wasn't expecting to be at Bay Hill until he didn't qualify for a World Golf Championship next week.

The change in plans has worked out nicely so far.

In only his fourth appearance in the Arnold Palmer Invitational over the last decade, Hoffman made seven birdies in slightly warmer conditions Friday for a 6-under 66 that gave him a one-shot lead over Emiliano Grillo of Argentina.

Grillo made two eagles on his opening nine, holing a 35-yard bunker shot on the par-5 12th and chipping in from just off the green on the par-5 16th. He made birdies on the par 5s on the front nine that carried him to a 68.

Matt Fitzpatrick of England had four birdies on the back nine for a 69 and was two shots behind.

Sam Saunders, the 29-year-old grandson of Palmer, had three straight bogeys around the turn and never caught up. He wound up with another 74 and missed the cut by one shot in the first Arnold Palmer Invitational since the death of the beloved tournament host last September.

''I don't know, I've got a monkey on my back there where I just always seem to work my way toward that cut number and think about it too much,'' Saunders said. ''It's all part of the learning experience, and just got to get better.''

The cut was 3-over 147. Two players who missed the cut at least provided some entertainment.

British Open champion Henrik Stenson hit three balls out of the water, including two on one hole. His blast from the pond short of the 11th green barely made it out and rolled down the slope, only to be caught by a tuft of grass. His next chip rolled back down the slope and into the water, leading to a triple bogey. He also played out of the water on the 16th. Stenson shot 74.

One day after Cody Gribble grabbed the tail of an 8-foot alligator, spooking it back into the lake, Smylie Kaufman was walking along and didn't see the gator. He jumped back in fright when he spotted it. The gator didn't move.

Hoffman knows all about missing the cut at Bay Hill. He has left early three times in four previous trips to Bay Hill. The exception was in 2012, when he tied for 59th. He had only one sub-70 round, a 69 on the first day in 2013. He shot 79 the next day and missed the cut. That was four years ago, the last time he played.

Hoffman only had to finish 41st at the Valspar Championship last week to get one of the 64 available spots through the world ranking for the Dell Technologies Match Play next week in Austin, Texas. Instead, he missed the cut and will be the second alternate, unlikely to get in.

So he added Bay Hill, a decision that was even easier because it was the first one without Palmer.

''I played halfway decent the first round last time I was here,'' he said. ''In the schedule, it hasn't fallen where I would like in the past. I wasn't in Match Play, and then obviously honoring Arnie is not a hard thing to come here and play.''

Palmer died in September, and the week has been a tribute to him, from the 13-foot bronze statue near the first and 10th tees to his signature umbrella logo worn by players on their apparel, golf bags and fairway metal covers.

Saunders played with Rory McIlroy, who had another mixed bag and shot 71 to finish at 1-over 145, leaving him 11 shots out of the lead.

Defending champion Jason Day was 1 over for his round until he hit a 340-yard drive on the par-5 16th, hit a short iron to 8 feet and made the eagle putt. He saved par on the final hole with a 5-foot putt for a 71 and was at 3-under 141, still in range with 36 holes to play with hopes of extending a peculiar streak at Bay Hill. Tiger Woods won back to back and then Matt Every won back to back over the last four years.

Grillo has been spending most of his time working on his short game, noticing a month ago that his putter moved back and through like a figure 8. He didn't need a putter for his two eagles, though he saved par with a 10-foot putt on the 18th as he made the turn.

He was tied for the lead until missing an 8-foot par putt on No. 8, though he still goes into the weekend playing in the final group.

''Just play from the fairway. That's going to be key,'' Grillo said. ''Somehow, I managed to shoot a very good round considering how bad I hit it off the tee today.''