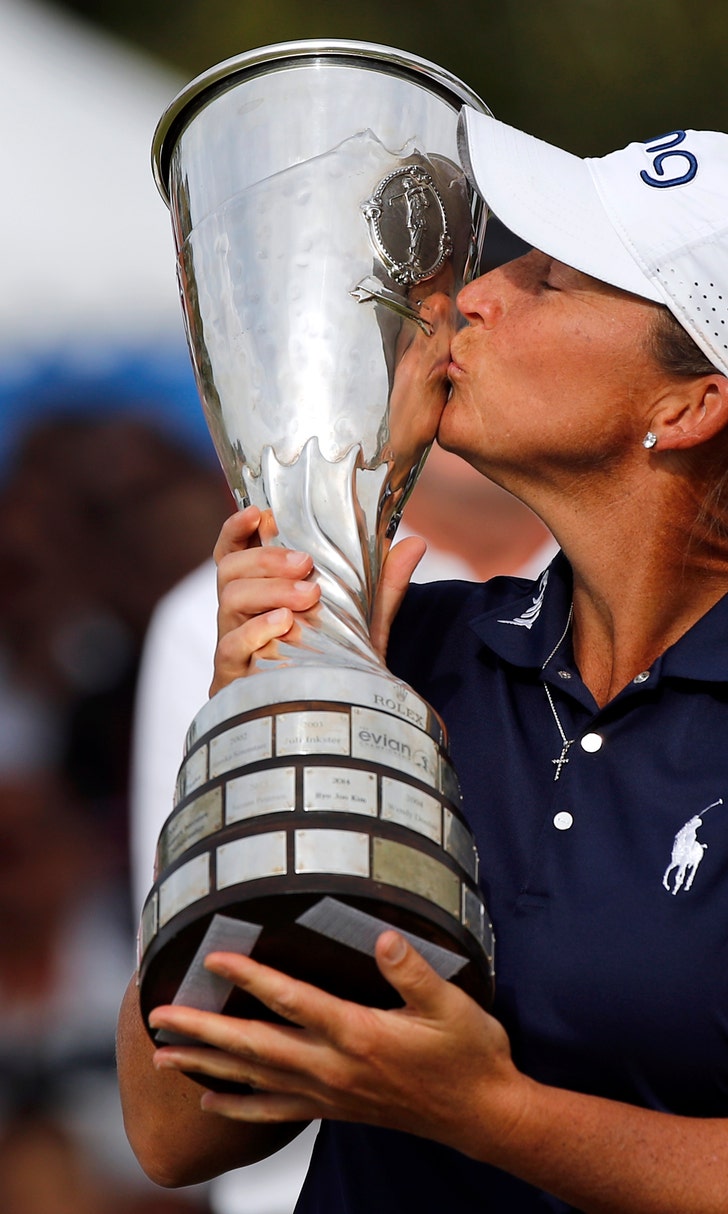 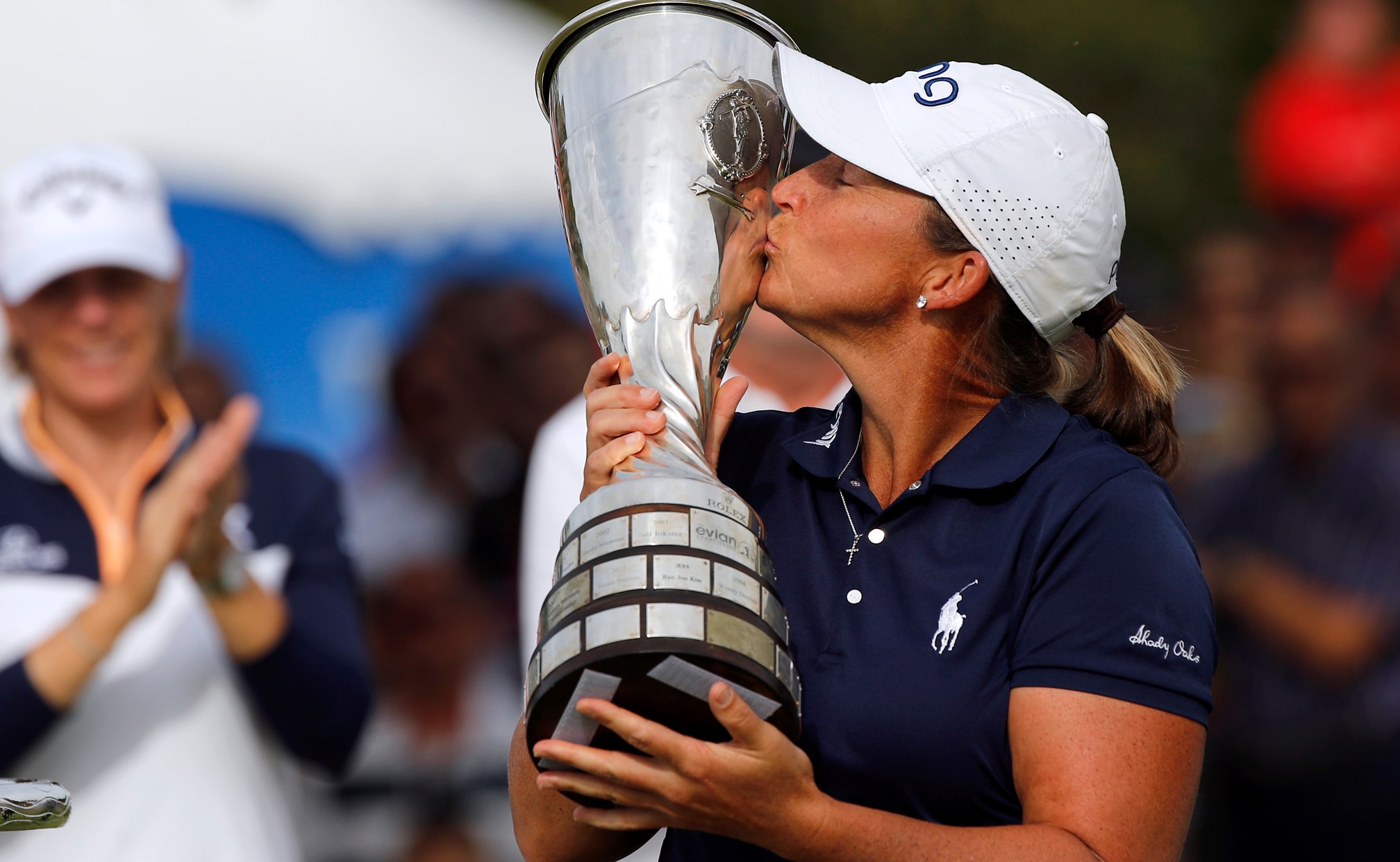 EVIAN-LES-BAINS, France (AP) — Angela Stanford ended her long wait for a first major title when her 3-under 68 was enough to win the Evian Championship by one shot Sunday after long-time leader Amy Olson made double bogey on the 18th.

Olson missed a six-foot putt for bogey on the 18th to force a playoff, while Stanford waited near the green signing autographs for dozens of young spectators.

Stanford, who got the last of her five LPGA Tour titles in 2012, put her hands to her mouth on hearing she had won, and was in tears during television interviews.

Olson carded a 74 to fall into a four-way tie for second place with fellow Americans Austin Ernst (68) and Mo Martin (70), and Sei Young Kim (72). Martin barely missed with a birdie chance on the 18th to face Stanford in a playoff.

After Olson was outright or joint leader all day — briefly with Stanford at 13 under with four holes to play — she three-putted to end the week with a career-best result.

The 26-year-old Olson's best finish in an LPGA event was tied for seventh in 2014.

Bae returned to the PGA Tour this season after two years of mandatory military service in South Korea, but lost his card with a 202nd-place finish in the FedEx Cup standings. The two-time PGA Tour winner entered the week needing a few thousand dollars to wrap up a card and ended up making $180,000.

Albertson had already earned a PGA Tour card with a top-25 finish on the Web.com Tour regular-season money list, and Sloan, Schenk, Roberto Diaz and Dylan Frittelli all earned enough money to get four of the 25 cards available in the four-event series.

The season-ending Web.com Tour Championship is next week at Atlantic Beach Country Club in Florida.

Broadhurst rebounded from a bogey on the par-3 11th with birdies on the par-4 12th and par-5 13th and made a 15-foot birdie putt on the par-4 18th. The 53-year-old Englishman finished at 15-under 201 on the tree-lined layout that was the longtime home of the PGA Tour's Buick Open.

Broadhurst won for the second time this year in Michigan, following his Senior PGA victory at Benton Harbor in May with his fifth senior title. He also teamed with Kirk Triplett for a playoff victory over Lehman and Bernhard Langer in April in the Legends of Golf.

Scott McCarron, tied for the second-round lead with Tom Lehman and Jeff Maggert, had a 77 to tie for 33rd at 5 under. The winner two weeks ago in Canada, McCarron dropped four strokes on the final two holes on the front nine, making a bogey on the par-3 eighth and a triple bogey on the par-4 ninth. Maggert shot a 72 to tie for eighth at 10 under.

THE HAGUE, Netherlands (AP) — Ashun Wu birdied the 18th hole on Sunday to secure a one-stroke victory over Englishman Chris Wood at the KLM Open, becoming the first Chinese player to win three times on the European Tour.

Wu had an eagle putt on the final hole at The Dutch in Spijk that narrowly missed, leaving him a tap-in bidie for a 4-under 67. Wood, who had the 54-hole lead, needed a birdie on the par-5 18th and had to settle for par and a 69.

"It is very special for a Chinese player to play on the European Tour," Wu said. "I love to play here and to win three times feels amazing."

Thomas Detry, who thought he had missed the cut on Friday and drove home to Belgium, made it back in time for a 63 on Saturday and then a 66 on Sunday to finish alone in third.

Sanghyun Park completed a wire-to-wire victory in the Shinhan Donghae Open with a 8-under 63 on Sunday for a five-shot victory over Scott Vincent on the Asian Tour. ... Liam Johnston closed with a 5-under 67 for a two-shot victory over Tom Murray in the Kazakhstan Open on the European Challenge Tour. ... Neil Schietekat shot a 4-under 68 for a one-shot victory over Louid de Jager in the Vodacom Origins in Arabella on the Sunshine Tour. ... Colombia's Nicolas Echavarria won the Sao Paulo Golf Club Championship, leading wire-to-wire in the PGA Tour Latinoamerica event. The former Arkansas player shot 64-66-68-67 for a one-stroke victory over Augusto Nunez of Argentina. ... Danny Walker won the Freedom 55 Financial Championship in London, Ontario, for his first Mackenzie Tour title. The 22-year-old former Virginia player closed with a 6-under 64 for a two-stroke victory. ... Gary Orr made birdie on the final hole at Craigielaw Golf Club and closed with a 5-over 76 for a one-shot victory over Paul Streeter in the Scottish Senior Open on the Staysure Tour.

So Young Lee closed with a 5-under 67 for a four-shot victory over Ju Young Pak in the All For You Championship on the Korean LPGA Tour. ... Kotono Kozuma closed with an 8-under 64 and won the Mungingwear Ladies Tokai Classic by one shot on the Japan LPGA Tour. ... South Korea's Hyemin Kim won the Murphy USA El Dorado Shootout in Arkansas for her second career Symetra Tour title. She finished with a 1-over 73 for a three-stroke victory over Brittany Benvenuto.