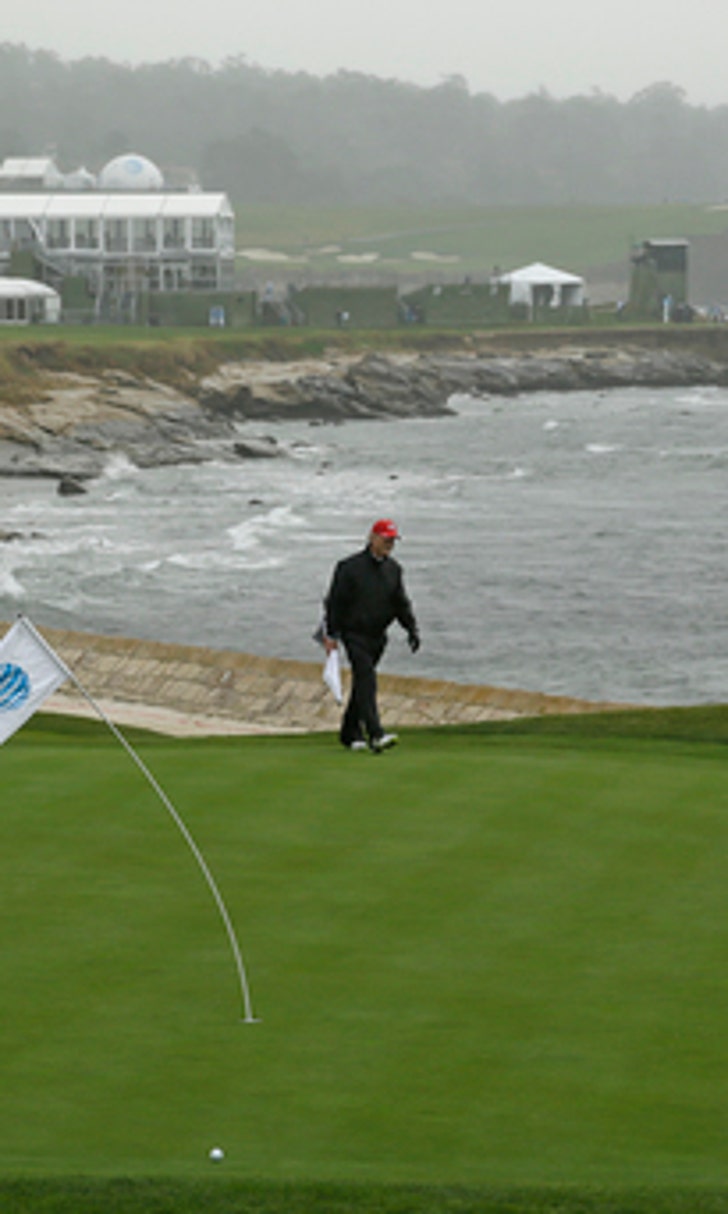 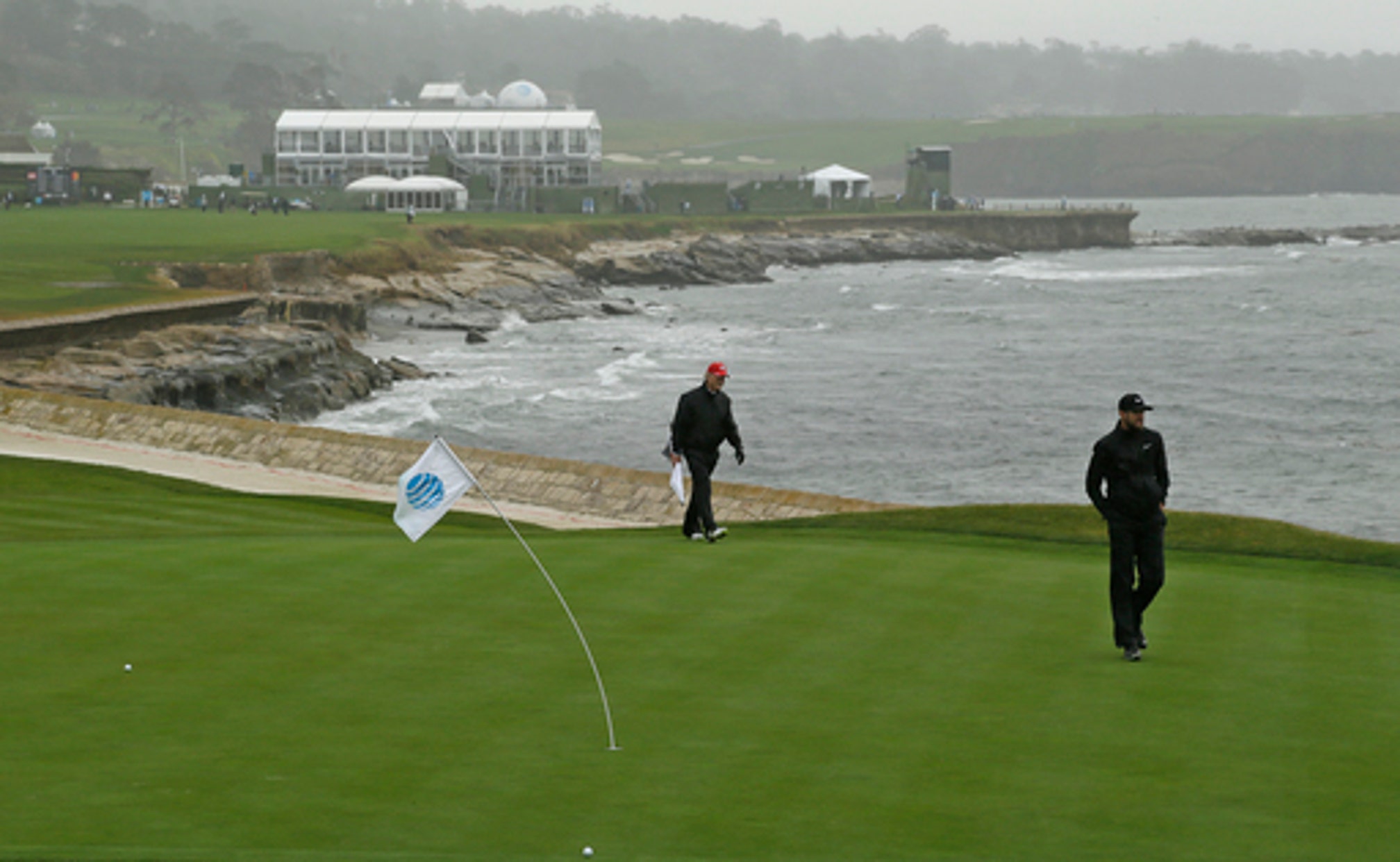 PEBBLE BEACH, Calif. (AP) Jordan Spieth could barely stand up and worried his hat would fly off in the middle of his swing.

From 176 yards downhill to the par-3 11th green at Monterey Peninsula, he ripped a 4-iron and hoped for the best. When he saw it land about 6 feet from the flag, he declared to anyone within earshot, ''That's the best shot I've ever hit.''

This was a snapshot of the nasty side of the AT&T Pebble Beach Pro-Am on Thursday, with severe conditions that once led to the term ''Crosby weather'' from the days when Bing Crosby was the host and Pebble could be a blend of beauty and beast.

The PGA Tour moved up tee times by an hour to try to beat the storms, but it wasn't enough. Already saturated, the greens on all three courses began holding enough water that play had to be suspended.

Seung-Yul Noh, Joel Dahmen and Rick Lamb each shot a 4-under 68 at Spyglass Hill to share the lead, and more importantly, they were among the 75 players who finished. The rest had to return at 7:30 a.m. Friday - with lingering rain in the forecast - to finish the round before moving on to another course.

Spyglass has the most shelter from the wind because of the inland holes cut through a forest.

Mark Hubbard had a 3-under 69 at Pebble Beach, which is exposed along the coast. Only three players reached the green on the par-4 ninth hole into the wind. Hubbard finished his round there with a bogey and treated it like a par.

Spieth, even though he missed four putts inside 6 feet on the bumpy greens, was at 3-under par with two holes to play on the Shore Course at Monterey Peninsula. And as he walked in the final two holes in the rain, tilting his umbrella to fight the wind and rain, he was quite pleased.

The ''that'' was what amounted to a four-club wind, and the best example was the partner he has had the last three years - Dustin Johnson, the U.S. Open champion and among the most powerful players in golf.

Johnson could barely hold up his umbrella in the wind when he stepped out from under it and smashed his drive on the 599-yard 12th hole. From the first cut of rough, he then hit a full 3-wood. And for his third shot, he had 4-iron into the green. And he was still short.

Asked if that ever happened to him on a par 5, Johnson didn't blink before saying, ''Never.''

On the next hole, typically tame at 434 yards, Johnson hit driver and had 190 yards left. He hit a 3-iron - he normally hits 7-iron from that distance - to the back pin to about 5 feet and made it for birdie.

''Eagle,'' Johnson said when he walked off the green.

Hubbard started on the back nine at Pebble, before the strongest of the wind and the rain arrived. He made three short birdie putts, made the turn and then holed a 15-foot eagle putt on the par-5 second hole to reach 5 under. And then it was time to hang on.

''At that point, I was glad I had a cushion,'' Hubbard said.

With 104 players on each course - half of them amateurs - footprints pile up on the soggy greens and every putt is bouncing any direction. Hockey great Wayne Gretzky, playing with Johnson, missed badly from 8 feet right before Spieth's 4-foot par putt took a bounce to the left and lipped out.

''If the best players in the world can't make `em, how am I supposed to?'' The Great One cracked.

Spieth had a short birdie putt on the par-5 sixth hole and declared it to be ''the hardest, straight 4-foot putt I'll have all year.'' He missed it.

But he did enough right, including that 4-iron on 11th hole.

After play was suspended, and he was out of the moment, he backed off such a proclamation.

DIVOTS: Phil Mickelson had seven birdies through 17 holes at Monterey Peninsula. He also had two double bogeys and was 1 under with one hole to play. ... Shane Lowry of Ireland opened with a 70 and said while he is accustomed to the wind and rain at home, ''We wouldn't play golf on some days like this.'' Lowry and his wife are expecting their first child at the end of the month. ... Danny Lee was 5 over through 12 holes when he withdrew. J.J. Henry withdrew after an 84.