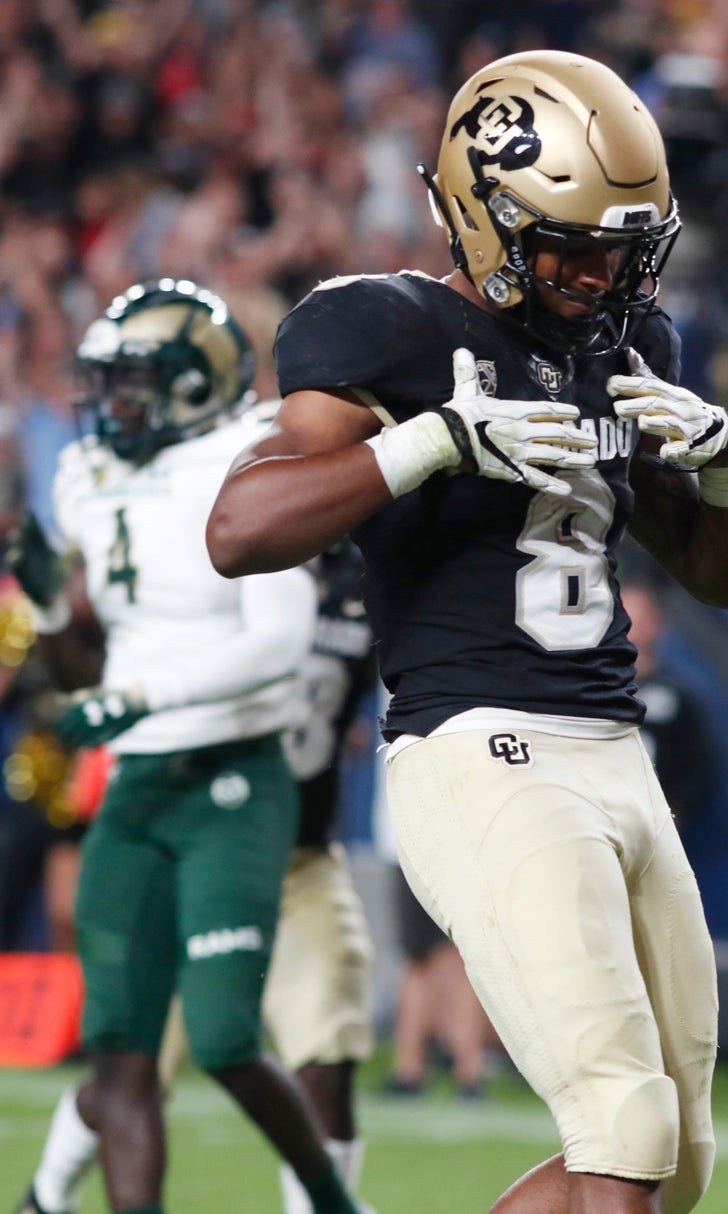 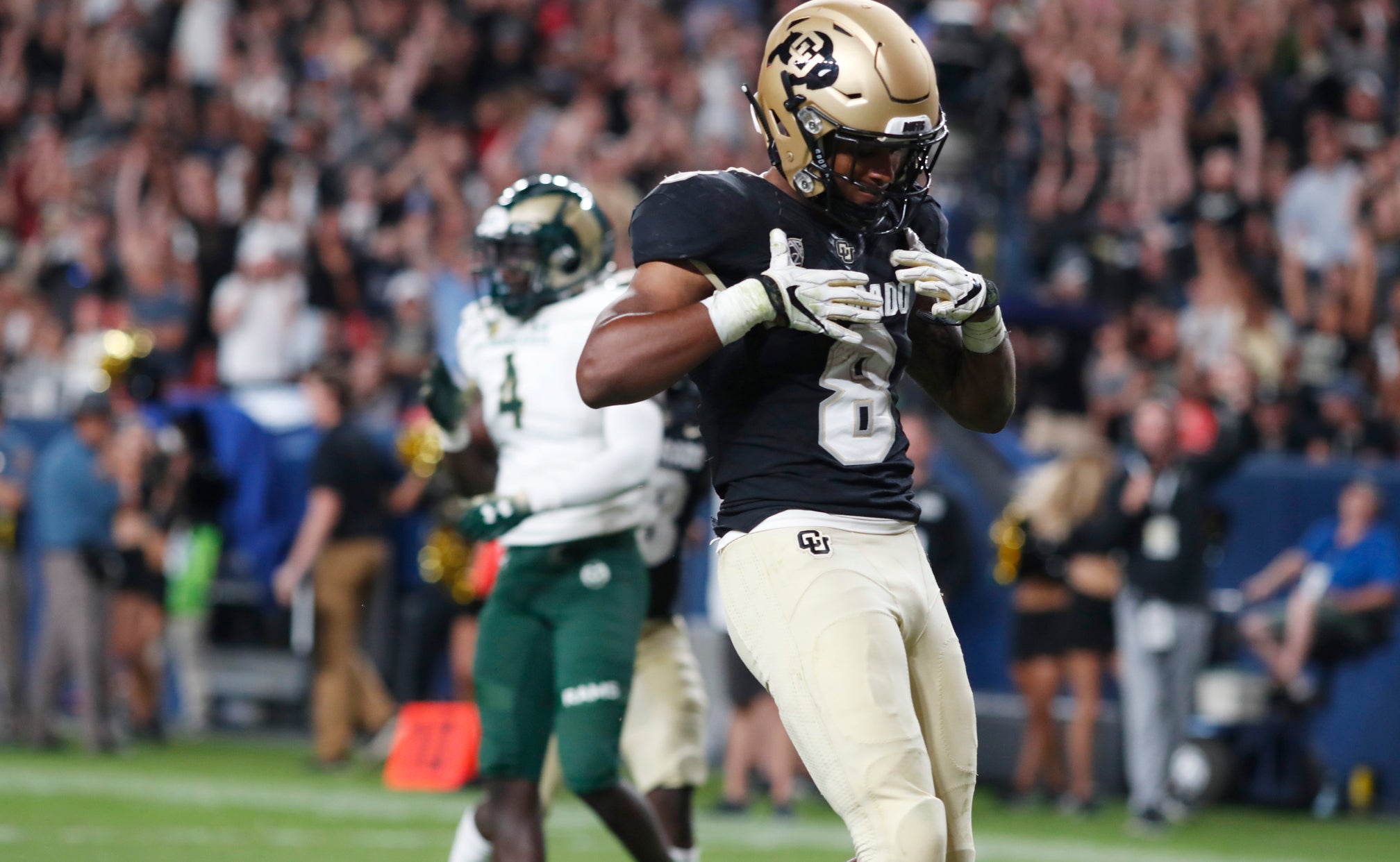 previous story
AP Top 25 Podcast: Where do FSU and Tennessee go from here?
next story
Titans' kicker hopes for midseason return after going on IR

Worth the wait: Buffaloes tailback makes most of 1st start

BOULDER, Colorado (AP) — A bundle of energy, Colorado tailback Alex Fontenot spoke in quick bursts after a recent practice. He zig-zagged over topics as if he were darting through a defense.

The redshirt sophomore apologized at one point and laughed: "Sorry. I'm not really an interesting person."

On the contrary. There are layers to the geology major just waiting to be excavated. He's the son of longtime NFL defensive lineman Albert Fontenot. He wears his dedication on his sleeve in the form of an arm tattoo that says "Loyalty." He thinks big, too, and one day hopes to make his mark in the oil business.

Fontenot certainly struck it rich in his first start, erupting for 125 yards and three touchdowns in a win over Colorado State.

"It's exciting," Fontenot said, "to get my time to shine."

To him, that's patience and persistence personified.

As a redshirt his first season at Colorado in 2017, Fontenot used the opportunity to absorb pointers from former Colorado standout and current Denver Broncos tailback Phillip Lindsay. All set to be the starter last season, Fontenot saw graduate transfer Travon McMillian arrive that summer and take over.

When his time arrived Friday, Fontenot made the most of it by exploding through the Rams defense. His three rushing touchdowns are tied for the second most in a starting debut by a Colorado tailback, behind only Michael Adkins, who had four against Charleston Southern in 2013.

"Very fast and shifty," said quarterback Steven Montez , whose team hosts No. 25 Nebraska on Saturday. "He makes our offense that much more dynamic."

The thought of following in his father's footsteps and becoming a defensive lineman never entered his mind.

Although, he was briefly a cornerback in middle school. But once he reached the high school level, his coaches at George Ranch in Richmond, Texas, switched him to tailback. In 2015, Fontenot shared the backfield with Darius Anderson, who's now at Texas Christian. They helped the Longhorns to an undefeated season, with Fontenot scoring three touchdowns in the state championship game.

What stuck out to his coach was Fontenot's spirit.

"He always celebrated Darius' accomplishments more than his own," recalled his high school coach Ricky Tullos, who's now coaching at Pearland High. "He's always been unselfish and really cares about his team and his teammates. It doesn't surprise me he was able to overcome adversity at the college level and wait for his time to shine."

Albert Fontenot was a fourth-round pick by the Chicago Bears in 1993. The Baylor product also played for the Chargers and Indianapolis Colts while recording 27 1/2 sacks over a 130-game career.

"Just do what I've been doing my whole life," Fontenot said.

He's got a big test this weekend against a Cornhuskers defense that limited South Alabama to 83 yards rushing in the opener. It's the first meeting between the former Big Seven/Eight/12 rivals in Boulder since 2009.

"Have to treat it like another game," said Fontenot, who had 11 carries for 43 yards last season in spot duty, along with two blocked punts on special teams. "Can't get too excited about it or too nervous."

About that "Loyalty" tattoo down his left arm: It represents the importance of family, he explained.

About his degree in geology, with a minor in atmospheric and oceanic studies: He wants to work in the oil industry and help a company find, well, oil. "I like money," he joked.

And about his running style: Full speed ahead, with a few jukes when necessary. His longest run against Colorado State was a 32-yard burst in the first quarter. He also had a 22-yard TD scamper in the fourth to wrap up the win.

"His balance is his best quality," Montez said. "He can break that first tackle, whether they're pulling on his leg or grabbing him by his jersey. He kind of just slips the tackle, does a little stumble, and just goes and scores a touchdown."

A performance worth the wait.