Can Florida strengthen its position in the SEC East race at rival Georgia's expense? Does unbeaten Temple have a real shot at knocking off playoff hopeful Notre Dame?

Each Thursday, Stewart Mandel, Bruce Feldman, Joel Klatt and Jim Ross will make the calls on who'll win the weekend's most intriguing matchups.

In addition to our straight-up picks, Mandel and Feldman will dive a little deeper into the games with their picks against the spread.

And if you're looking for more games, you can find predictions for every Division I FBS game for the coming week here, courtesy of WhatIfSports.

Without further ado, here are this week's picks: 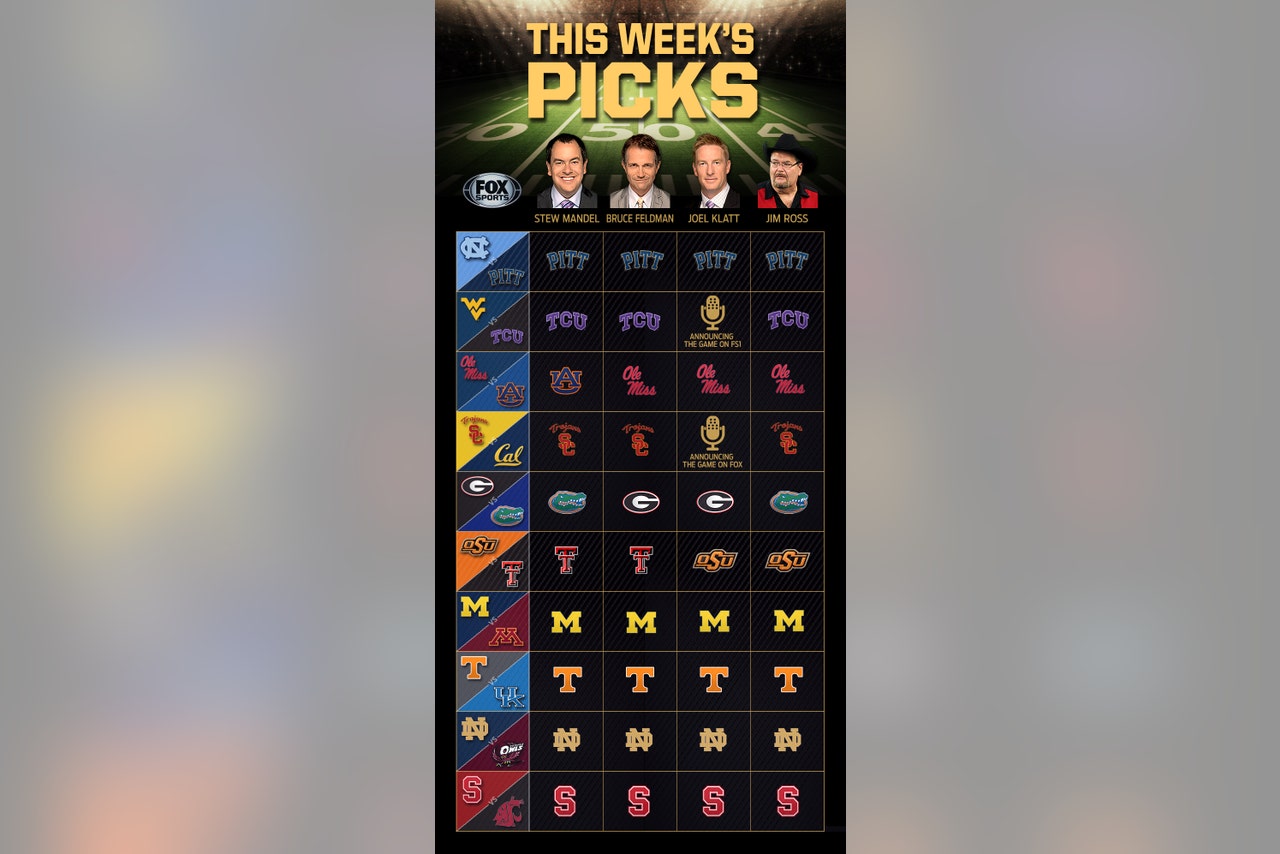 PICKS AGAINST THE SPREAD

Mandel: The Tar Heels are a tough team to read in part because of a light schedule to date. Pitt just keeps winning close games. The Panthers pull this one out, too. Pittsburgh 24, North Carolina 20

Mandel: Trevone Boykin and the Frogs should have their way with a West Virginia D that’s struggled in its last three games while TCU’s rested D plays well. TCU 44, West Virginia 20

Feldman: Dana Holgorsen’s team came within a point of TCU last season and beat the Horned Frogs a year earlier. The hunch here is that the Mountaineers can keep it tight again even without outstanding safety Karl Joseph. TCU 38, West Virginia 34

Feldman: The Rebels get stud DL Robert Nkemdiche back, and that should help as they face Auburn. Plus, I like the matchup of the Ole Miss receivers against the Tigers and their very shaky defense. Ole Miss 31, Auburn 28

Mandel: Bears QB Jared Goff will have a better day against USC’s defense than did Utah’s Travis Wilson, but not as much as Cody Kessler will against Cal. USC 42, Cal 35

Feldman: As good as Jared Goff is, the cast around him — from O-line to defense — doesn’t match up very well against USC. The Bears were overmatched against UCLA, and I think the Trojans will be able to do much of the same. USC 44, Cal 31

Mandel: It’s impossible to say which versions of these teams will show up coming off their bye weeks, but Florida has looked like the more complete squad to this point. Florida 27, Georgia 20

Feldman: The Dawgs have had a rough month, getting blown out at home by 'Bama, losing to UT and then barely beating a struggling Mizzou squad. Even without Nick Chubb, I think UGA will win to make it four of their last five against UF. Georgia 17, Florida 13

Mandel: Texas Tech showed promise when it beat Arkansas and took TCU to the wire. Coming off a bad loss at Oklahoma, Tech rebounds to upset the Cowboys. Texas Tech 34, Oklahoma State 30

Mandel: Minnesota will come out fighting for departed coach Jerry Kill, but the Gophers’ offense is limited as it is much less going against Michigan’s top-rated defense. Michigan 24, Minnesota 10

Feldman: Tough spot for the Gophers in the wake of Jerry Kill stepping down. I think they’ll play hard, but Michigan is more talented, especially on defense. Michigan 17, Minnesota 7

Mandel: The 3-4 Vols could wind up 8-4 if they win this swing game. Jalen Reeves-Maybin and the Tennessee defense shut down Kentucky’s struggling offense. Tennessee 20, Kentucky 7

Feldman: The Vols held their own against the Tide last week and had 'Bama on the ropes for a bit. There may be a bit of a hangover factor coming off that against a very physical team, but I think Josh Dobbs and Jalen Hurd will come through late in the game to be the difference. Tennessee 23, Kentucky 17

Mandel: Temple’s defense is legit, but it won’t be able to hold down the likes of C.J. Prosise and Will Fuller for four quarters. The Irish pull away in the second half. Notre Dame 30, Temple 13

Mandel: Strange things could happen on Halloween night on the Palouse, but to this point Wazzu’s shown little sign it can keep Stanford’s ball-control offense off the field. Stanford 38, Washington State 26

Feldman: Wazzu is much improved on both sides of the ball — although probably not on special teams — but the Cougars just don’t match up very well against the punishing Cardinal, who may run for 400 yards in the Palouse. Stanford 48, Washington State 31

Mandel: After playing four of its past five games on the mainland, Hawaii, which opened the season by beating Colorado, returns home and ends its five-game skid. Hawaii 28, Air Force 24

Feldman: Vernon Adams is getting settled in now that his hand has healed, and I think he can burn the very aggressive ASU defense. Oregon 37, Arizona State 34