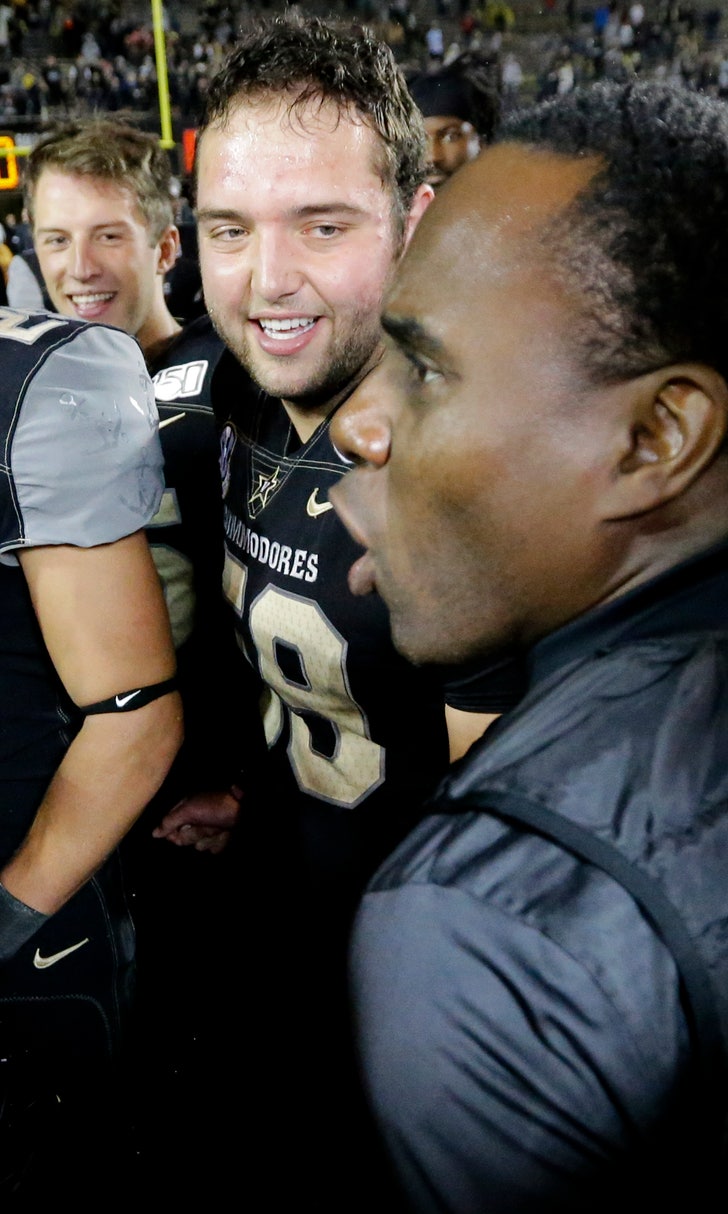 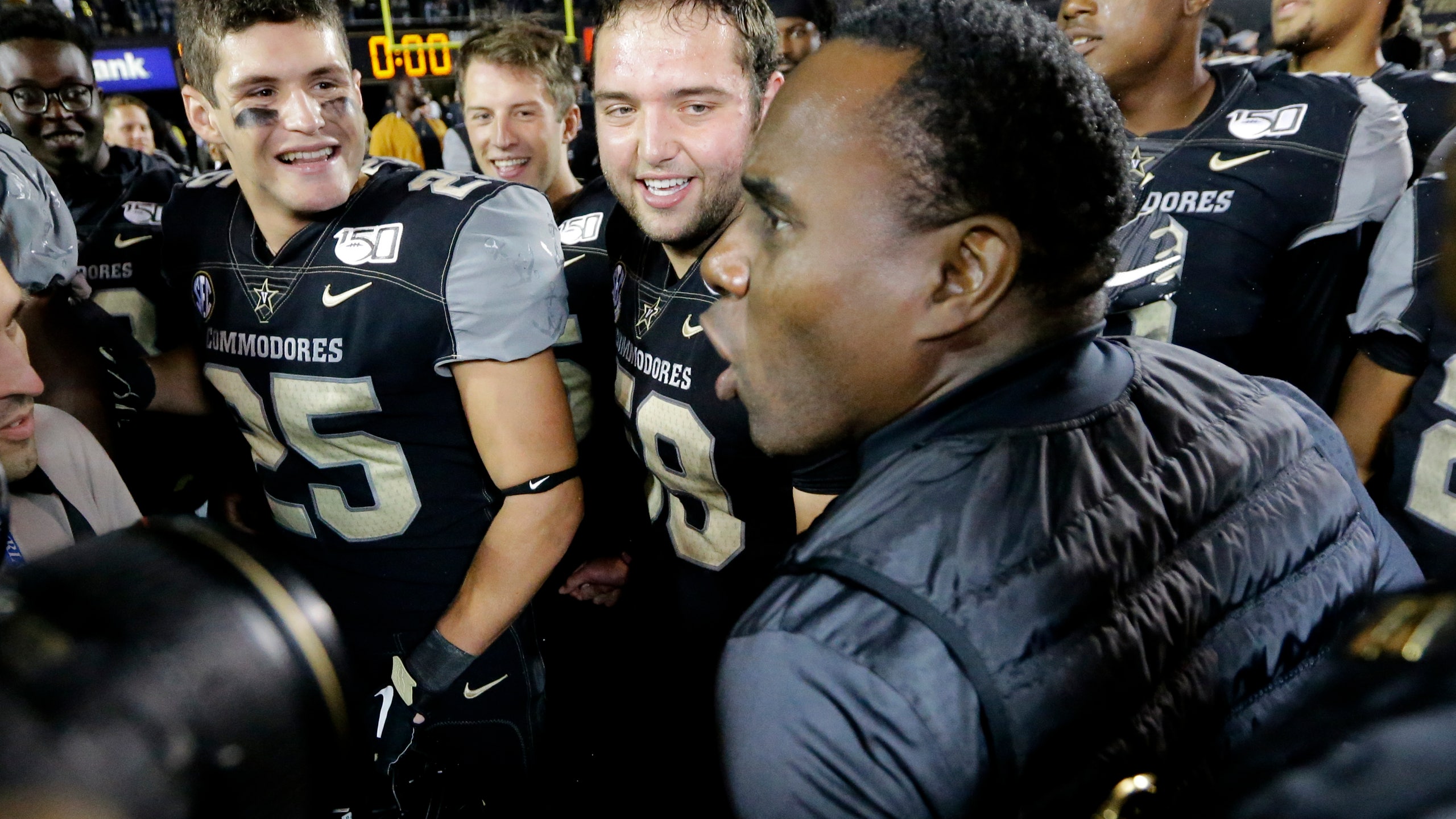 COLUMBIA, S.C. (AP) — If there were ever two football coaches needing a strong finish to the regular season, it's South Carolina's Will Muschamp and Vanderbilt's Derek Mason.

The pair have been subject to whispers about their futures as their teams have struggled to find consistency and take that next step in the Southeastern Conference Eastern Division.

The Gamecocks (3-5, 2-4 SEC) shocked college football with their upset at Georgia last month, but have lost two games since. The Commodores (2-5, 1-3) had hoped last year's bowl trip would jump start a big season, but highlights this year have been few.

Still, Muschamp and Mason believe there's plenty to achieve in the final month of the season, which starts when the teams face each other Saturday.

"It's that time of the season where you got to grab everything there is to grab, and that's exactly what this football team is doing," Mason said.

Vanderbilt comes in with momentum after knocking off one-time SEC East leader, then-No. 22 Missouri two weeks ago. It will try and end South Carolina's dominance in the series as the Gamecocks have won 10 straight and 17 of the past 19 against the Commodores.

Mason is 26-43 in six seasons at Vanderbilt, leading the team to a pair of bowl games in 2016 and last season. Unless, things turn around the final month, Mason will endure his sixth losing season at the school.

Things aren't much better at South Carolina. Muschamp touted this as his best, deepest team. Yet, the Gamecocks squandered second-half leads in losses to North Carolina, Florida and, just last week, to Tennessee.

Muschamp has led South Carolina to bowl games in each of his first three seasons — and received a huge contract extension last December. But he'll need to win three of the final four games (No. 20 Appalachian State, Texas A&M and No. 4 Clemson follow Vanderbilt) to keep that streak going.

Muschamp is confident his players can rebound.

"We got guys to lean on in that locker room, that are all about the right things," he said. "We are disappointed with where we are, but you are what your record is, and we are ready for Saturday night."

Some other things to watch when Vanderbilt plays South Carolina:

Walk-on junior college transfer Mo Hasan remains in the concussion protocol even after the Commodores had an open date last week from taking a hit to the head in Vanderbilt's upset of Missouri. That has the Commodores waiting to see if Hasan will be ready to start his second straight game. If Hasan isn't cleared to play, graduate transfer Riley Neal likely replaces him for his eighth start.

Not everything was bad for South Carolina at Tennessee. Bryan Edwards' one-handed stretching grab at the end of the first half was part of highlight packages throughout the weekend and even got a shoutout on Monday Night Football from receiving great Randy Moss.

"To hear your name come out of his mouth, it's an honor," Edwards said.

Vanderbilt senior running back Ke'Shawn Vaughn piled up 176 yards with two TDs in the upset of Missouri, and he is second in the SEC and 19th nationally with 926 all-purpose yards.

South Carolina starting tailback Rico Dowdle will miss his second straight game with a knee sprain. He was hurt on the first play against Florida three weeks ago and sat out most of that one, too.

In trying to find a spark, Mason didn't start a single senior in the Commodores' upset of Missouri. He went with five juniors, three sophomores and a trio of redshirt freshmen. The change seemed to work as Vanderbilt allowed a season-low in points (14), total yards allowed (293) and yards per play (4.4).

'Michigan State was a whole new world'
In our series of Black History Month Stories, RJ Young looks at how Michigan State championed integration and changed college football.
1 day ago

Texas Justice
Earl Campbell is arguably the greatest Longhorn ever. He might not have gotten there without one judge's courage, RJ Young writes.
3 days ago

Gus Johnson wins Jake Wade Award
FOX Sports announcer Gus Johnson is the winner of a prestigious award for "outstanding contributions" in the media to college sports.
4 days ago
those were the latest stories
Want to see more?
View All Stories
Fox Sports™ and © 2021 Fox Media LLC and Fox Sports Interactive Media, LLC. All rights reserved. Use of this website (including any and all parts and components) constitutes your acceptance of these Terms of Use and Updated Privacy Policy. Advertising Choices. Do Not Sell my Personal Info