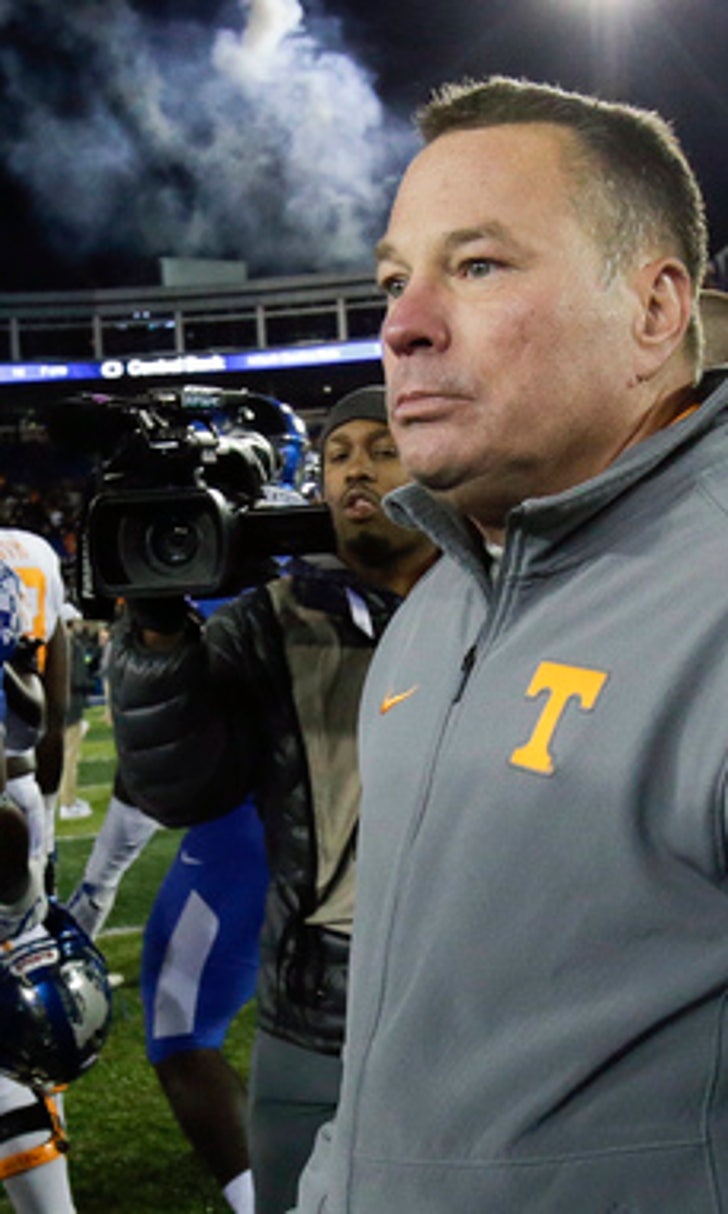 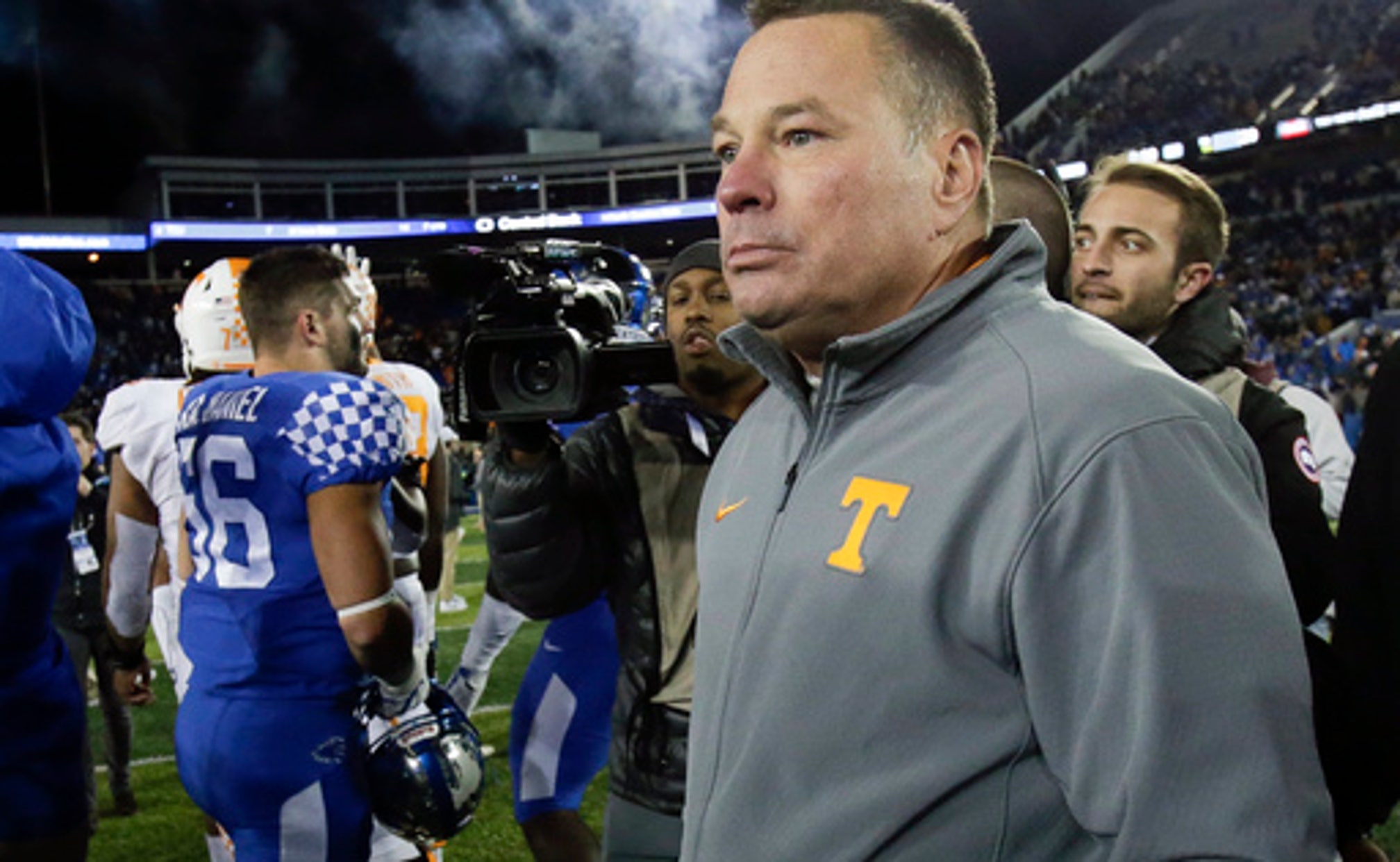 KNOXVILLE, Tenn. (AP) This has been an unhappy homecoming week for Tennessee.

The Volunteers (3-5) have lost four straight and are winless in Southeastern Conference competition. Tennessee fans have been grumbling about coach Butch Jones for the last month and have been talking this week about staying away from Neyland Stadium.

All that means Tennessee might not have as much of a home-field advantage as usual Saturday when the Vols face Southern Mississippi (5-3) on homecoming weekend.

''Certainly I understand our fans' frustration,'' Tennessee athletic director John Currie said. ''We're not where we want to be. It's unacceptable to be 0-5 in the Southeastern Conference, but we are where we are. ... Our focus is on our student-athletes. I know that's what Coach Jones is thinking about right now, is getting our team ready to play Saturday night.''

In a season that has fallen far short of expectations, Tennessee still has at least one goal within reach. The Vols can become bowl eligible by winning three of their last four games.

''We're definitely fighting to get to a bowl game,'' wide receiver Brandon Johnson said. ''We're trying to stretch the season out even longer bowl game is definitely the top priority right now.''

Southern Mississippi has its own postseason aspirations and becomes bowl eligible with one more win. The Golden Eagles also are seeking to beat a Southeastern Conference team for the second straight season after winning at Kentucky last yea r.

Tennessee just lost 29-26 at Kentucky , which opened the season by winning 24-17 at Southern Mississippi . Tennessee may be slumping but still enters Saturday's game as a 6 +-point favorite.

''They're a talented football team,'' Southern Mississippi coach Jay Hopson said. ''The bottom line is we know they just lost some hard-fought games. Three of those five (losses this season) were really last-second ballgames.''

That doesn't soothe Tennessee's angry fan base. The ''EmptyNeyland'' hashtag circulated on Twitter this week as some ticketholders discussed staying home as a sign of protest.

''I understand we need to win some football games, and I'm going to do everything in my power for our players, for our university and for our program to get that done,'' Jones said.

Some other things to watch Saturday when Tennessee hosts Southern Mississippi.

SLOWING DOWN SMITH: Southern Mississippi's Ito Smith has gained 5,793 career all-purpose yards to rank second among active Football Bowl Subdivision players , behind only Oregon's Royce Freeman. Smith has run for 817 yards this year and averages 102.1 yards rushing per game. Smith will be facing a Tennessee defense that ranks 125th out of 129 FBS programs against the run .

KELLY'S RETURN: Tennessee's John Kelly will return to action Saturday along with backup linebacker Will Ignont after both were suspended for the Kentucky game following their citations on misdemeanor drug-related charges. Kelly has rushed for a team-high 615 yards this season. It will be interesting to see how the Vols divide carries this week. Ty Chandler ran for 120 yards and Carlin Fils-aime added 73 yards against Kentucky while Kelly was out.

EAGLES' TWO QBs: Keon Howard has started five games and Kwadra Griggs has made three starts at quarterback for Southern Miss. Both played last week in a 30-12 loss to UAB . Hopson isn't saying which quarterback will start Saturday and is leaving open the possibility of playing two quarterbacks again. ''We've played two a lot this year,'' Hopson said. ''We have no hesitation about that.''

RED-ZONE WORRIES: Tennessee is 105th nationally in red-zone offense , while Southern Mississippi is tied for ninth in red-zone defense . Three times this year, Tennessee has committed a false start from the opponent's 1-yard line, and the Vols haven't scored touchdowns on any of those drives.

Jaret with the Jets
Buffalo's Jaret Patterson smashed records last Saturday. His reward? An easy selection as Reggie's Playmaker of the Week.
10 hours ago

Lead Dawgs
Unbeaten Washington looks to keep its lead in the Pac-12 North when Stanford visits Seattle as part of this week's Super 6.
13 hours ago