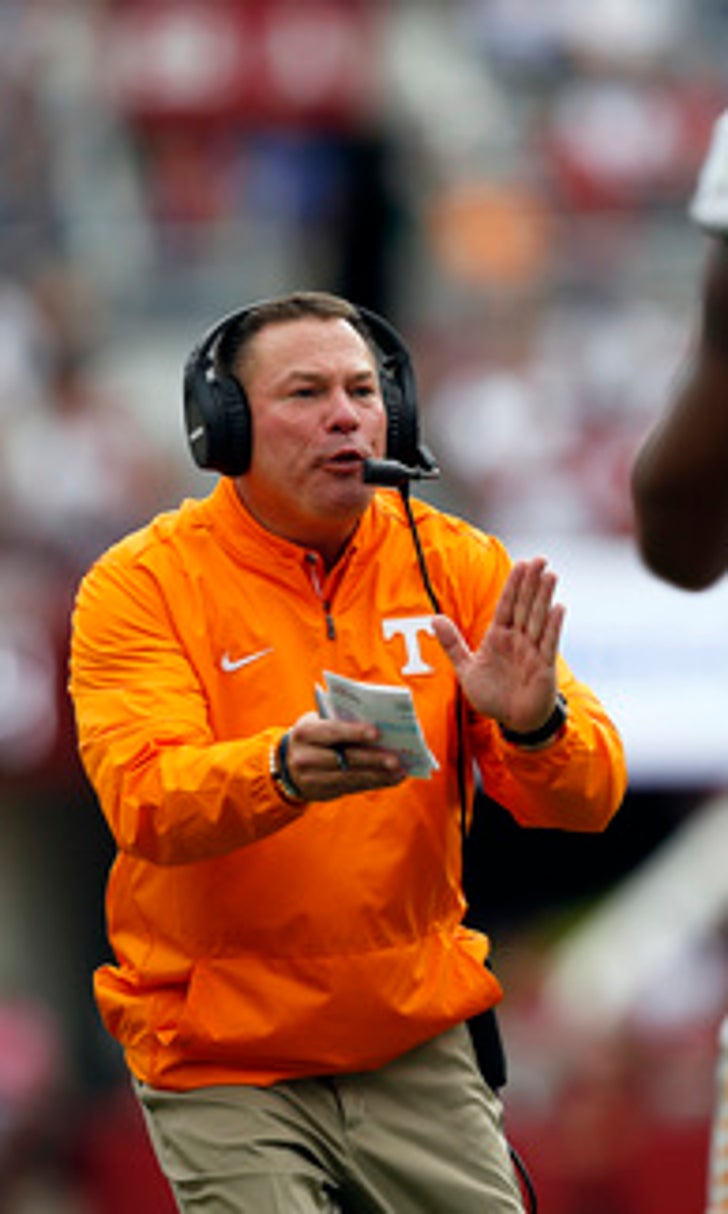 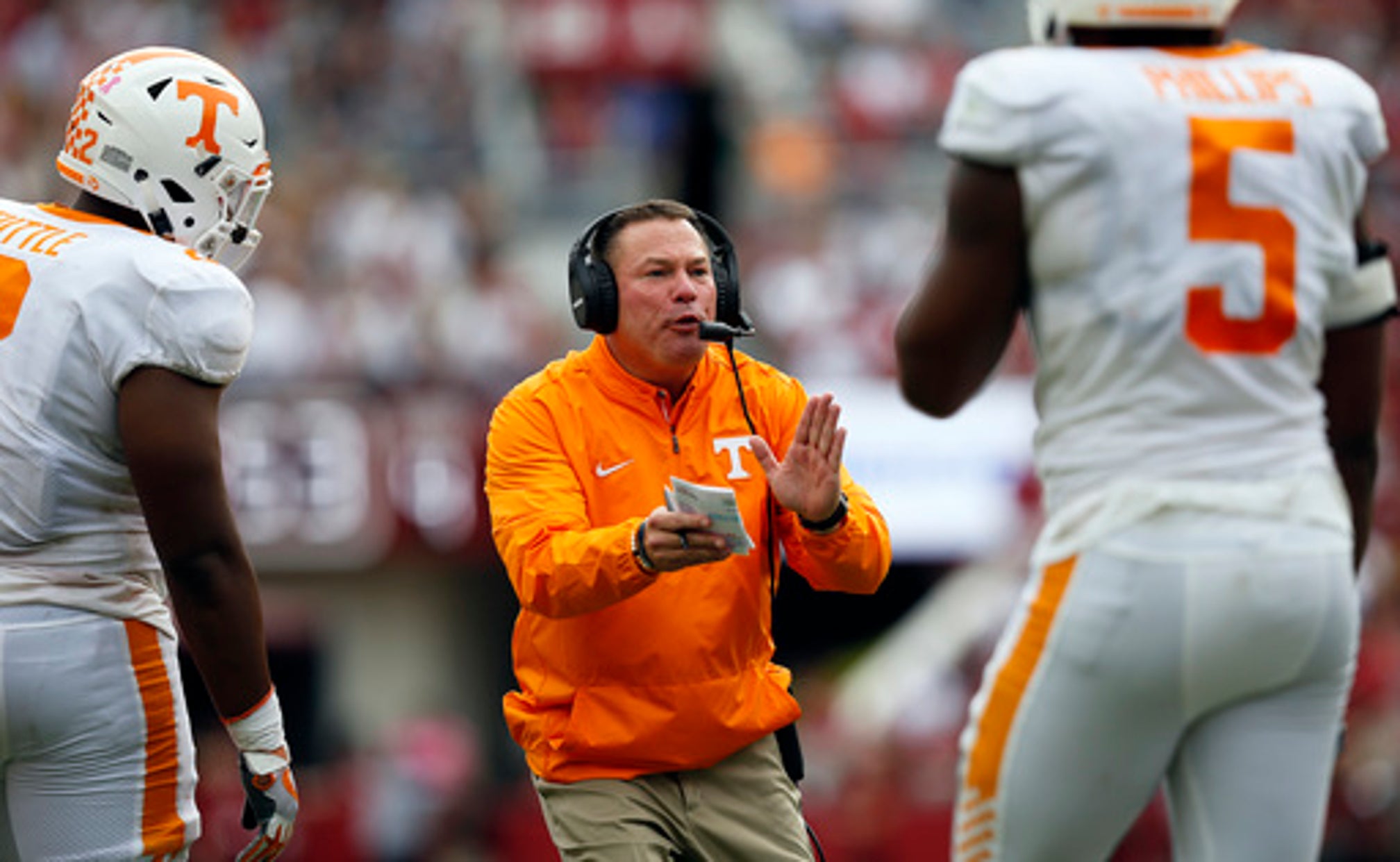 LEXINGTON, Ky. (AP) Tennessee and Kentucky are both motivated to rebound after humbling 38-point losses, a goal likely dependent on one of them correcting some lingering flaws.

The visiting Volunteers (3-4, 0-4 Southeastern Conference) are winless in league play and desperate to score their first offensive touchdown in more than a month. Kentucky (5-2, 2-2) has lost two of three SEC contests and looks to shore up a defense that has allowed 79 points the past two outings.

The question Saturday night is which team will be able to take advantage of the other's vulnerability.

''It's about us,'' Wildcats coach Mark Stoops said this week. ''We can't control what plays Tennessee calls and how they go about running their offense. We have to apply our rules and make competitive plays, so it's about us and our preparation.''

Staying focused is Kentucky's biggest challenge after allowing Mississippi State to break a 7-all tie with 10 unanswered points just before halftime. The Bulldogs hung 28 more on Kentucky in a 45-7 blowout that included an 84-yard interception return TD.

Letting opponents off the hook has been an ongoing concern for the Wildcats, who aim to shut down an opponent and end a five-game losing streak against their border rivals. A victory also clinches bowl eligibility for the second straight season.

Tennessee meanwhile seeks its first offensive touchdown in 14 quarters and a rebound from its 45-7 loss to top-ranked Alabama . The Vols' climb back will be steeper without leading rusher John Kelly, who was suspended on Wednesday along with linebacker Will Ignont after both were cited on misdemeanor drug-related charges .

Kelly is the SEC's No. 4 rusher at 87.9 yards per game with six touchdowns. He was being counted on to challenge a Kentucky run defense ranked third in the conference (123.6 yards) but coming off a game in which it allowed the Bulldogs to rush for 282 yards.

Tennessee coach Butch Jones believes his team has the depth and ability to reach the end zone for the first time in a while. Overcoming recent adversity, particularly without its top offensive player, is the Vols' biggest task.

''We're being tested right now and you find out about your character, you find out your resolve and your resiliency when you go through these trials,'' he said.

''You never understand why (things) happen, but they're a part of life, you hit it head on and keep grinding each and every day. I see this in our football team, I'm proud of our approach. Football has a way of working itself out.''

Some other things to watch as Kentucky hosts Tennessee:

STEPPING UP: Kelly's absence likely means a featured role for freshman Ty Chandler, who has run for 118 yards on 27 carries. Freshman Tim Jordan and sophomore Carlin Fils-aime also could get some carries. Kentucky ranks 26th nationally in run defense.

BALL PROTECTION: Kentucky had yet to lose the turnover battle until it finished minus-2 against Mississippi State and allowed the Bulldogs to score touchdowns off two interceptions. The Wildcats rank fourth in the SEC in turnover margin at plus-6 but know they can't give the Vols hungry easy chances to score. ''There were a lot of mistakes on my part that really could've put our team in a better situation,'' said quarterback Stephen Johnson, who has thrown just four INTs. ''I just have to focus on what I did wrong and cut all that out.''

BLITZ DUO: Kentucky's Josh Allen and Denzil Ware have combined for 30 tackles for loss and 19+ sacks over the past two seasons. Allen ranks second in the SEC with 6+ sacks this season and faces Tennessee redshirt freshman quarterback Jarrett Guarantano, who has been sacked 11 times in two starts.

PAST GLORY: Kentucky will honor former coach Rich Brooks and members of Wildcat teams that won bowl games from 2006 to 2008. None of those teams beat the Volunteers, who lead the series 79-24-9 and are 37-14-3 in Lexington. Tennessee has won 31 of 32 against Kentucky.