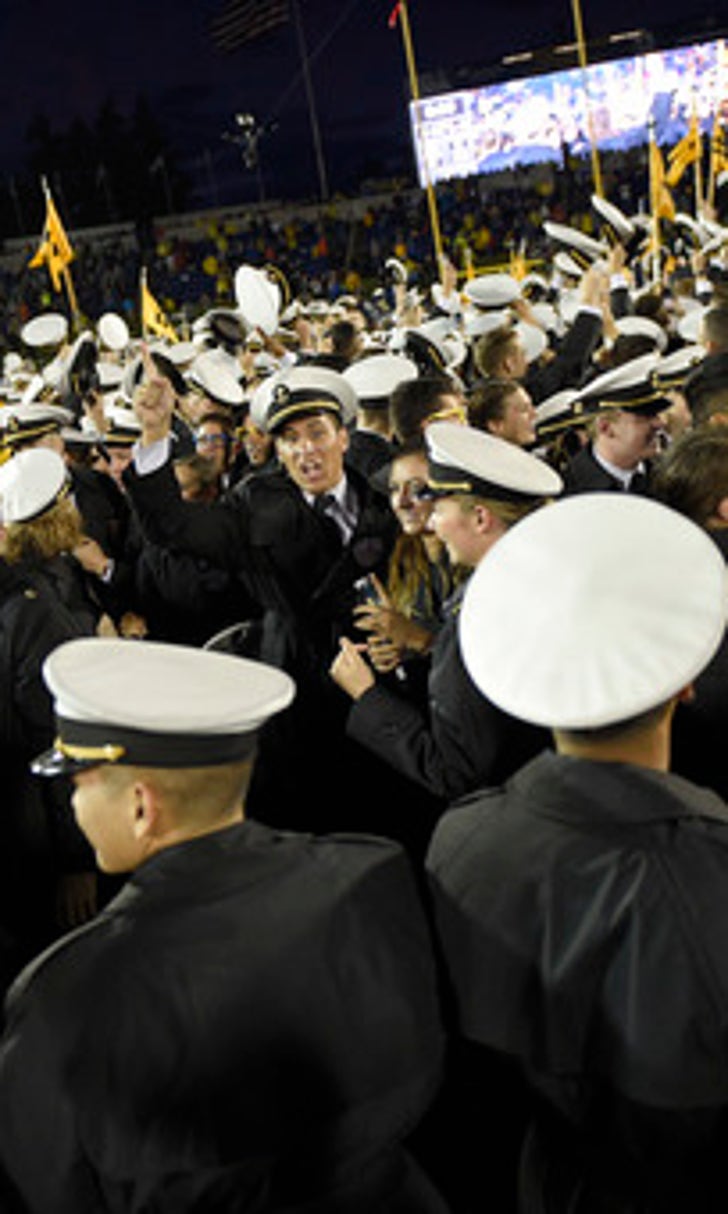 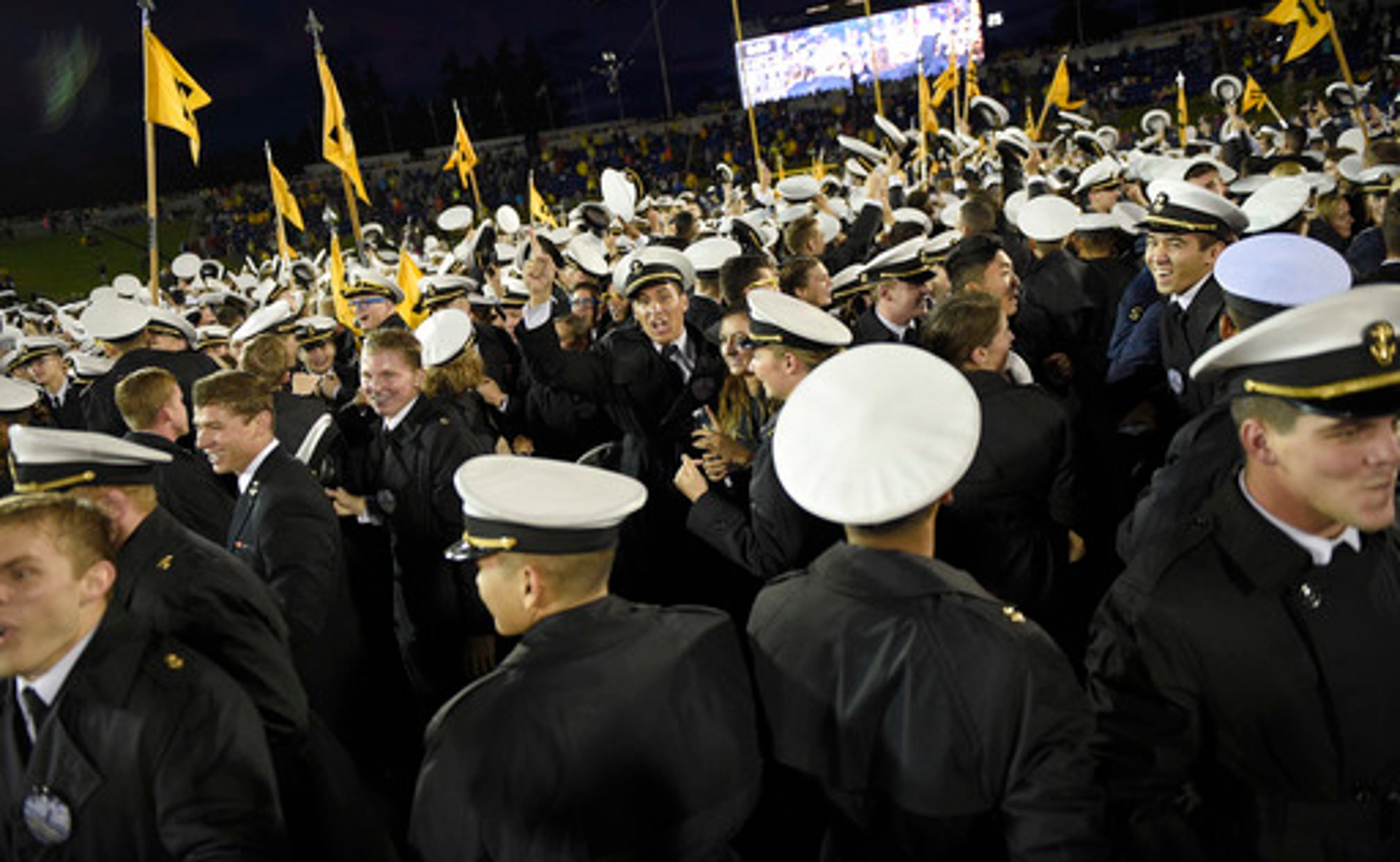 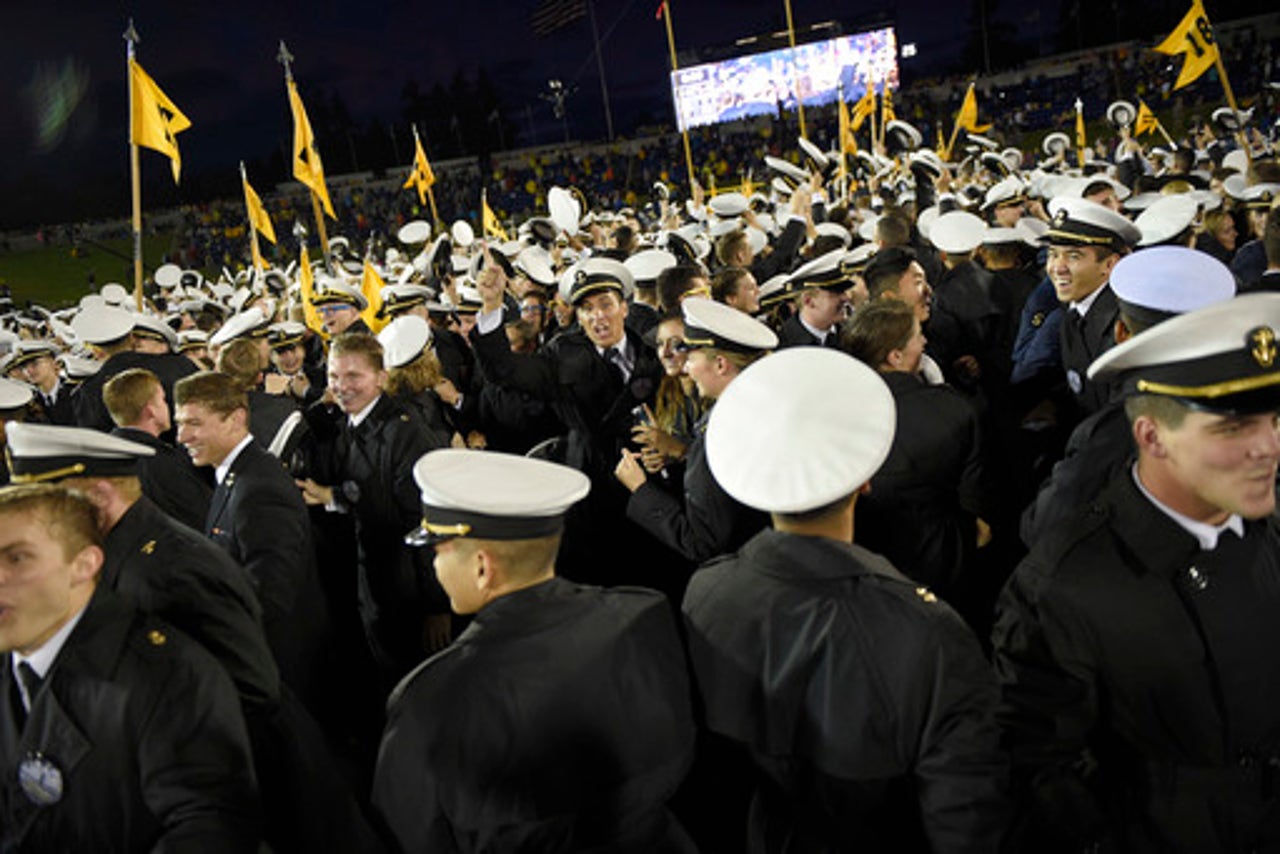 Will Worth ran for 115 yards and threw for two touchdowns Saturday to help the Midshipmen (4-1, 3-0 American Athletic Conference) pull off the upset. Navy hadn't defeated a Top 10 team since 1984, when it topped No. 2 South Carolina in Annapolis.

When it was over, streams of the Navy Brigade stormed the field to surround the players, most of them jumping for joy.

Navy pulled off the win with a precise triple-option attack that shredded the nation's top-ranked rushing defense. The Midshipmen came in as a 17-point underdog.

Houston's sloppiest performance of the season came in a driving rain. The Cougars (5-1, 2-1) committed three turnovers and gave up more points than in their previous four games combined.

Navy finished with 306 yards rushing, many of them on pitches from Worth as he sprinted laterally along the line. Houston was allowing only 42 yards on the ground per game.

Though the game was a sellout, thousands of fans failed to show because of the weather. Those who took their seats realized an upset was possible after first half ended tied at 20.

Navy scored three touchdowns in the third quarter - two of them on passes by Worth, the other on Josiah Powell's 34-yard interceptions return - to take a 41-27 lead.

That proved to be a deficit too much to handle for the Cougars, especially because their defense simply couldn't find a solution for Navy's multi-faceted attack.

Houston had won 19 of its last 20 games, including a 52-31 blowout of Navy last year. But on this day, the Cougars couldn't get into the end zone often enough despite compiling a whopping 484 yards in offense.

Houston quarterback Greg Ward Jr. went 32 for 50 for 359 yards and three touchdowns. He also ran for 94 yards and a score, but the Cougars never led after going up 20-17 in the second quarter.

His two interceptions were also a factor. Navy scored 17 points following Houston giveaways and did not commit a turnover.

Houston: The aura of greatness surrounding the Cougars fades a bit. The Cougars are now in second place in the AAC and won't get a chance for redemption until facing Louisville at home on Nov. 17.

Navy: This game should serve as a tremendous boost of confidence for the Midshipmen, who had their spirit shaken last week in a 28-14 loss to Air Force.

The Cougars should tumble out of the Top 10 in the AP Top 25 poll , which comes out Monday instead of Sunday this week.

Navy: The Midshipmen are on the road against East Carolina, now 2-4 after losing 38-22 to South Florida.