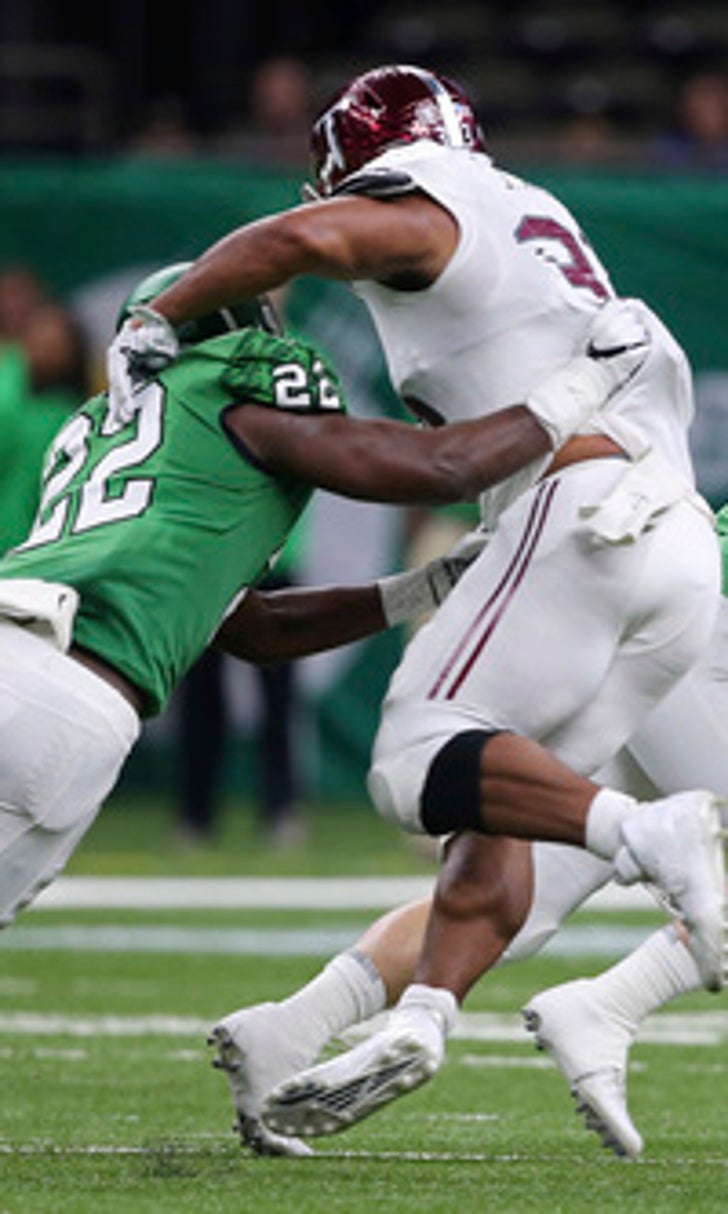 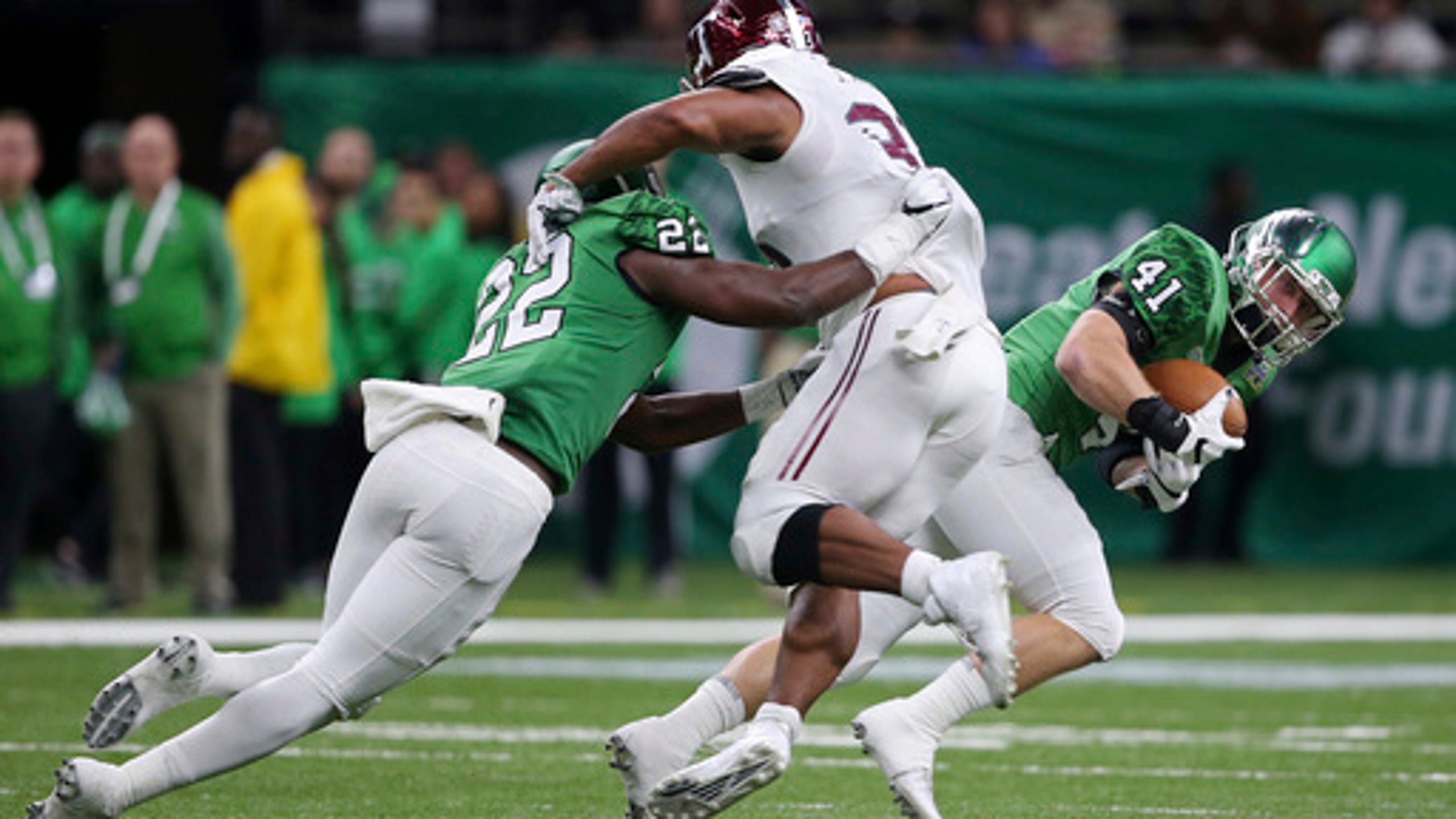 NEW ORLEANS (AP) When Troy quarterback Brandon Silvers glanced around the Superdome, his eyes would stop on the name of Archie Manning, who has become one of his mentors, or on spots in the stands where he's sat during games he attended as a fan.

During his next visit, he'll be able to look at spots on the field where he threw four touchdown passes, as well as the end zone where he ran for a short score, to help the Trojans beat North Texas 50-30 in the New Orleans Bowl on Saturday.

''Just being on that field today is going to be one of my great memories for a long time,'' Silvers said.

Silvers, a former counselor at Manning's football camp, threw for 305 yards, completing 24 of 31 passes. The Orange Beach, Alabama, native was intercepted once on a deep throw, but that hardly mattered in a game controlled by Troy's defense, which produced five North Texas turnovers.

''Our ability to get pressure on quarterback was probably the difference,'' said Troy coach Neal Brown, who has presided over 21 victories in the past two seasons.

Two of Silvers' TD passes went to Damion Willis, whom Silvers targeted more than usual because of an early injury to receiver Deondre Douglas. Willis had 136 yards on a New Orleans Bowl-record-tying 11 catches.

''I hated that Deandre went down, but like coach said, you can't flinch,'' Willis said. ''I didn't flinch today.''

Mason Fine passed for 303 yards and three touchdowns for North Texas (9-5), but was intercepted twice and fumbled twice. He finished with Mean Green single-season records of 4,052 yards and 31 TDs passing.

''Their font seven- that defensive line - gave me fits all day,'' Fine said. ''We never got in a rhythm. We never got comfortable.''

The Trojans were threatening to take a three-touchdown lead in the second quarter when a bad snap sailed over Silvers' head and linebacker Colton McDonald scooped it for a 56-yard fumble return to make it 22-13. Fine later found Michael Lawrence for a 13-yard TD on a diving catch near the sideline, making it 22-20.

But early in the third quarter, Fine's short pass was deflected back to linebacker Hunter Reese, whose interception set up Silvers' keeper to make it 29-20.

Troy widened the lead when Silvers rifled a 59-yard TD pass down the middle to Tevaris McCormick, who had 107 yards on five catches.

Troy: The Trojans received one vote in the last AP Poll, but might get more after arguably the greatest season in program history. One of the Trojans' 11 victories came on the road against, No. 16 LSU, which has a chance to finish with 10 wins.

North Texas: The Mean Green's struggles on defense this season meant its offense would need a clean, efficient performance. Instead, UNT was turnover-prone and struggled to protect Fine. Missing injured top rusher Jeffery Wilson only made matters worse as UNT had minus-8 yards rushing.

Fine was hit often and sacked six times, sometimes getting up slowly and limping - but never leaving the game.

''Everybody who watched the game understands how tough he is,'' UNT coach Seth Littrell said. ''He's not going to quit on his teammates. That's why he's so respected in our locker room.''

''There's not a dominant guy on our defense because everybody makes plays,'' Stadom said.

Troy did not reveal until kickoff that Chunn was unable to return from his Dec. 2 injury against Arkansas State.

Chunn has 47 career rushing TDs, one short of the league-record set by Tyrell Fenroy of Louisiana-Lafayette in 2008.

''I don't think you could really go out any (better) way,'' Anderson said.

Troy's offense will have to move forward without Silvers and Chunn. Their replacements will debut in Troy's 2018 opener on Sept. 1 at home against Boise State.

North Texas has a relatively young squad with only a handful of senior starters. UNT will have to replace starters at safety, defensive end, linebacker and right tackle. North Texas opens 2018 at home on Sept. 1 vs. SMU.

NFL Mock Draft 6.0
With the Super Bowl fast approaching and the combine next on the NFL calendar, check out Jason McIntyre's latest Mock Draft.
2 hours ago