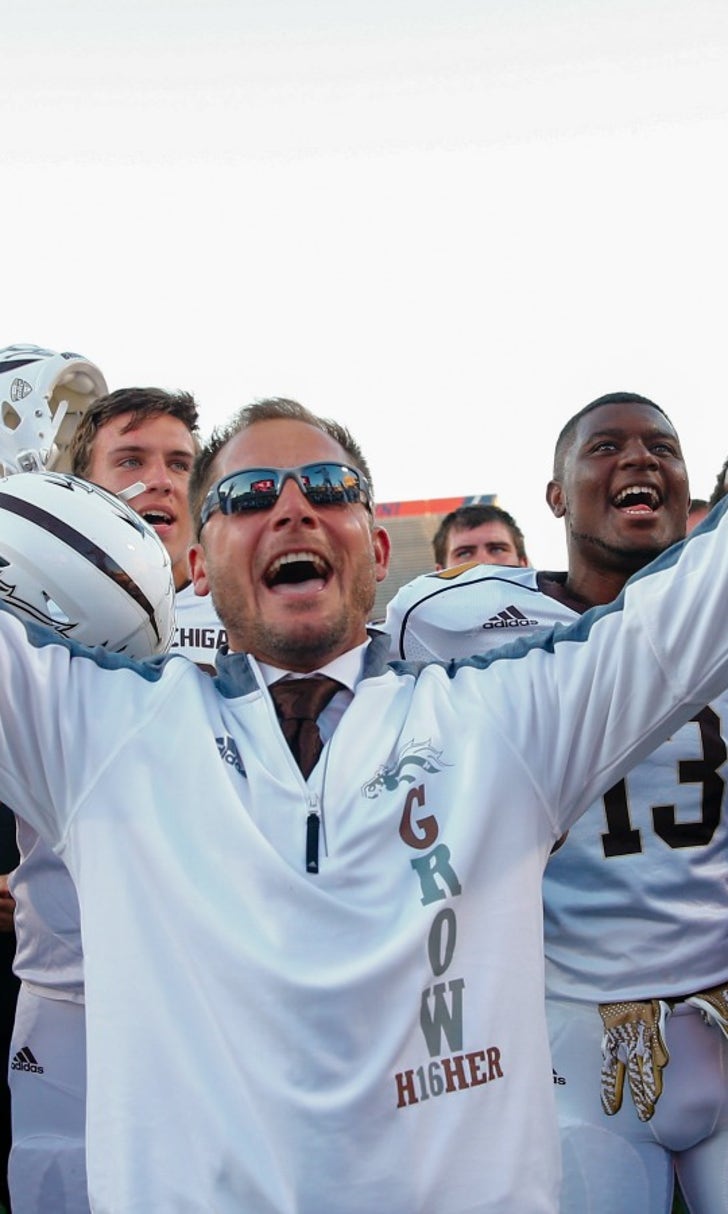 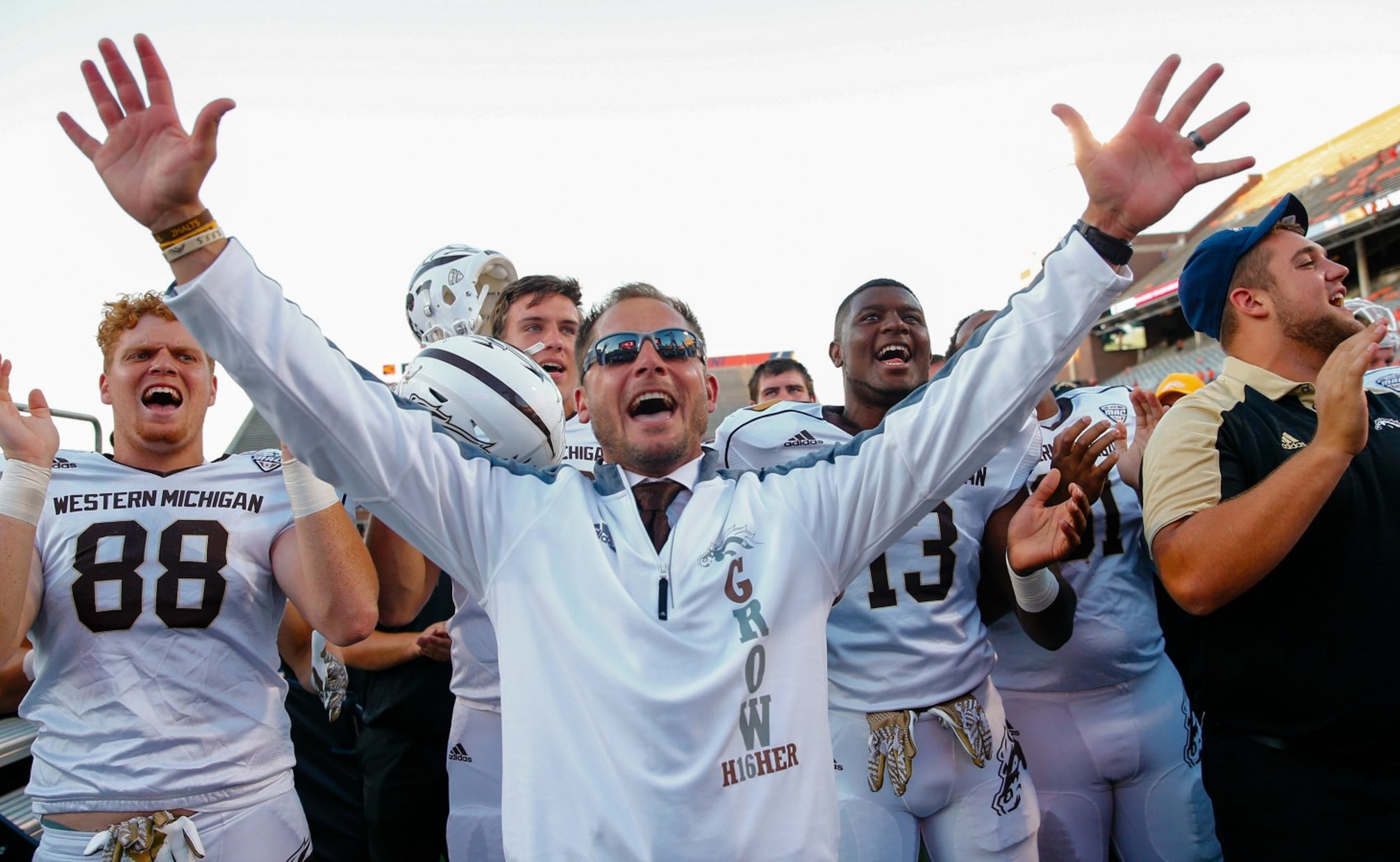 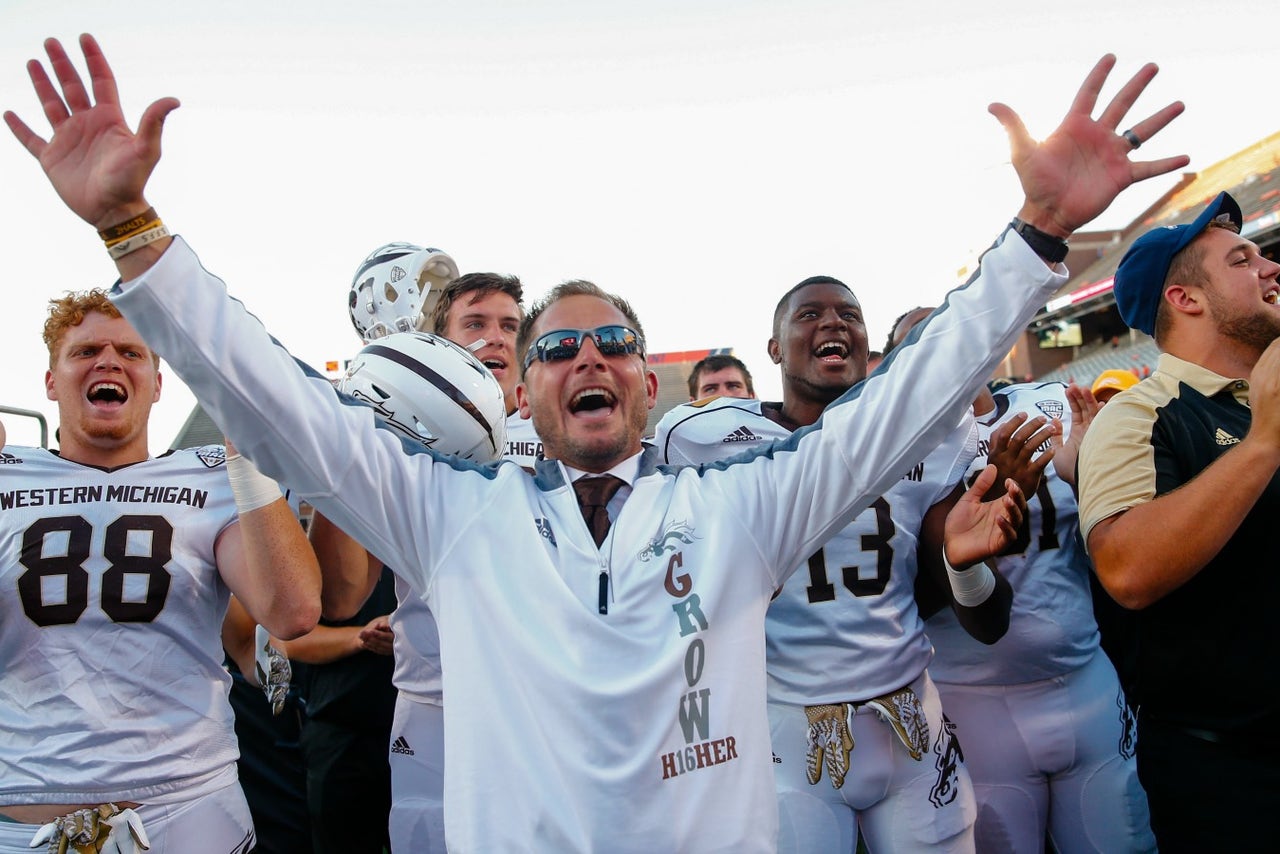 Do a quick Google search of Western Michigan football coach P.J. Fleck, and the same four or five themes seem to pop up in every search result.

He once jumped into a frozen lake for charity. He’s walked on hot coals and broken glass to fire up his team. He’s full of clever catchphrases like “Row the Boat” and when asked how his day is going, he never responds by saying “I’m doing well,” but instead by saying “I’m doing elite.”

Basically, if you judged Fleck based solely on Google, you’d think of him as no more than a never-ending stream of Red Bull-infused coaching clichés, some kind of Tony Robbins with a whistle around his neck.

Yet in getting Western Michigan off to an 8-0 start -- one of only five undefeated teams left in college football entering Tuesday night’s game at Ball State -- he’s proven to be something else: a darn good coach.

Not just a motivator or hype man, but the architect of one of college football’s most consistent mid-major programs over the last four years.

“This team has been through a lot,” Fleck told FOXSports.com late last week. “Most of our leaders went through a 1-11 season [back in 2013]. So they’ve embraced their past to create their futures.”

And in talking about Fleck and Western Michigan, that’s the most interesting part of the Broncos' journey. Not just their 8-0 record or No. 17 ranking in the AP Poll -- the highest in school history. But instead, how they got there. Western isn’t Boise State or Navy, a consistently good program for years, or even a Houston, which has had peaks and valleys but spit out a 13-win season in 2011 under Kevin Sumlin.

“Year one was just learn the culture,” Fleck said. “We couldn’t even build a foundation here; we had to break the foundation, and then dig, dig, dig the foundation. And when you’re 1-11 you dig down deep, a lot, and it’s deeper than you ever thought you’d have to dig. But we were going to do whatever we felt necessary in year one. We bottomed it out, where we could start completely over. And that’s what we did.”

For Fleck that culture was doing everything from establishing Western’s recruiting base (“We recruit six hours from the school,” he said), to even more simplistic things, like how his players would act. Guys would be on time. They would go to class. They would be active in the community and respectful to others.

It sounds simple, but for many players it wasn’t. Western had more than 40 guys leave the program following the first season, some 25 or so who graduated and over a dozen more who simply couldn’t cut it. While it didn’t quite produce a Bo Schembechler-esque “Those who stay will be champions” rallying cry, it did establish that those who did stay had bought in hook, line and sinker.

“You’ve got one year to lay the groundwork for exactly how your program will run, and how everybody has to be accountable,” Fleck said. “You get one shot, truly, at building that.”

And it was at that moment that the turnaround in Kalamazoo began and where the march toward 8-0 -- where Western joins Alabama, Michigan, Clemson and Washington as the only unbeaten FBS teams -- really did start. Despite the 1-11 record, Fleck signed the greatest recruiting class in the history of the MAC that winter, a group that included a slew of players with Big Ten offers. And the Broncos haven’t really slowed down since.

In Fleck’s second season, Western matched the previous year’s win total (of one) within two weeks, and doubled it within three, on its way to an 8-5 record overall. Last year, the Broncos went 8-5 again, beating Middle Tennessee State in the Bahamas Bowl for their first postseason victory in school history.

This year, it was about taking that bowl win and growing from there. Not just figuratively, but to use one of those clichés that Fleck has become Google-famous for, literally as well.

“Bamboo, we used that as a symbol of this year,” Fleck said. “Bamboo takes three years to grow underground, you don’t see anything at the surface for four years. The first three years, bamboo is all root system, and we kind of used that as an example for our first three years, we’ve been building the root system. And then I said ‘in year four, it can grow anywhere from 90 to 100 feet and shoot up, and then it goes everywhere.’”

“That was our theme back in January,” Fleck said. “We are the bamboo tree. This year four, we have to prepare you for this type of pressure, because it’s coming.”

And when Fleck says “pressure” he means it. With the foundation well-established, a winning culture built and expectations high, this year has been about putting his team in pressure situations every day, taking a good team and making it potentially great.

He gives an example from the preseason.

“So we get him out there and we make this bet with him,” Fleck said. “He has this nice, flowing, mullet, and I said ‘OK, put your mullet on the line with this one kick.”

Fleck placed the ball down, and in front of the whole team, Hampton lined up and booted the ball from 50 yards out. The kick had the distance, but missed a foot to the left.

“So now I’m going to shave this kid’s head,” Fleck said. “But, I wanted to put even more pressure on him.”

Fleck gave Hampton another chance at a kick, but backed it up and this time, to quote Fleck, “made him put more skin in the game.” Not only was Hampton’s mullet on the line, but another player’s too. Hampton lined up and missed again. Fleck grabbed the clippers, and the two mullets fell lifelessly to the ground.

But while that sounds bad -- two missed kicks under pressure in practice -- it isn’t. Hampton took the lesson and thrived under pressure, making three field goals in the team’s shocking 22-21 opening weekend win over Northwestern. That victory launched Western Michigan to its 8-0 start.

Of course, with success comes other pressure, this time not just from within the program, but outside as well.

With every win, Fleck’s name becomes more and more popular within coaching searches for vacant jobs at Power 5 schools. It’s just a part of the deal, and Fleck gets it. He also refuses to place his attention anywhere other than his team and its next opponent.

As for the mounting expectations, he and his team are ready to take those head-on as well.

It’s safe to say there’s been plenty to celebrate this year in Kalamazoo.

As it turns out, the Broncos aren’t all about walking on hot coals and well-worn clichés. They’re about winning as well. 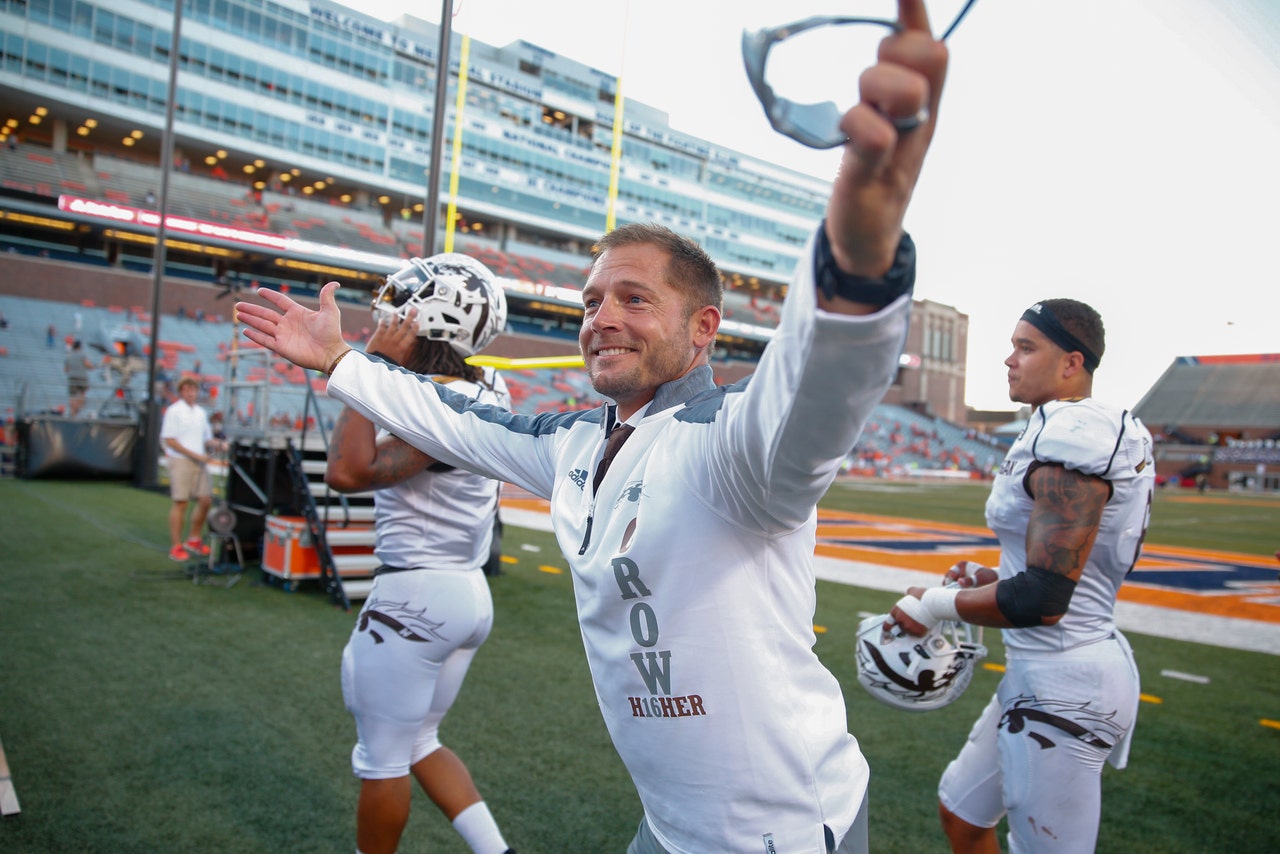 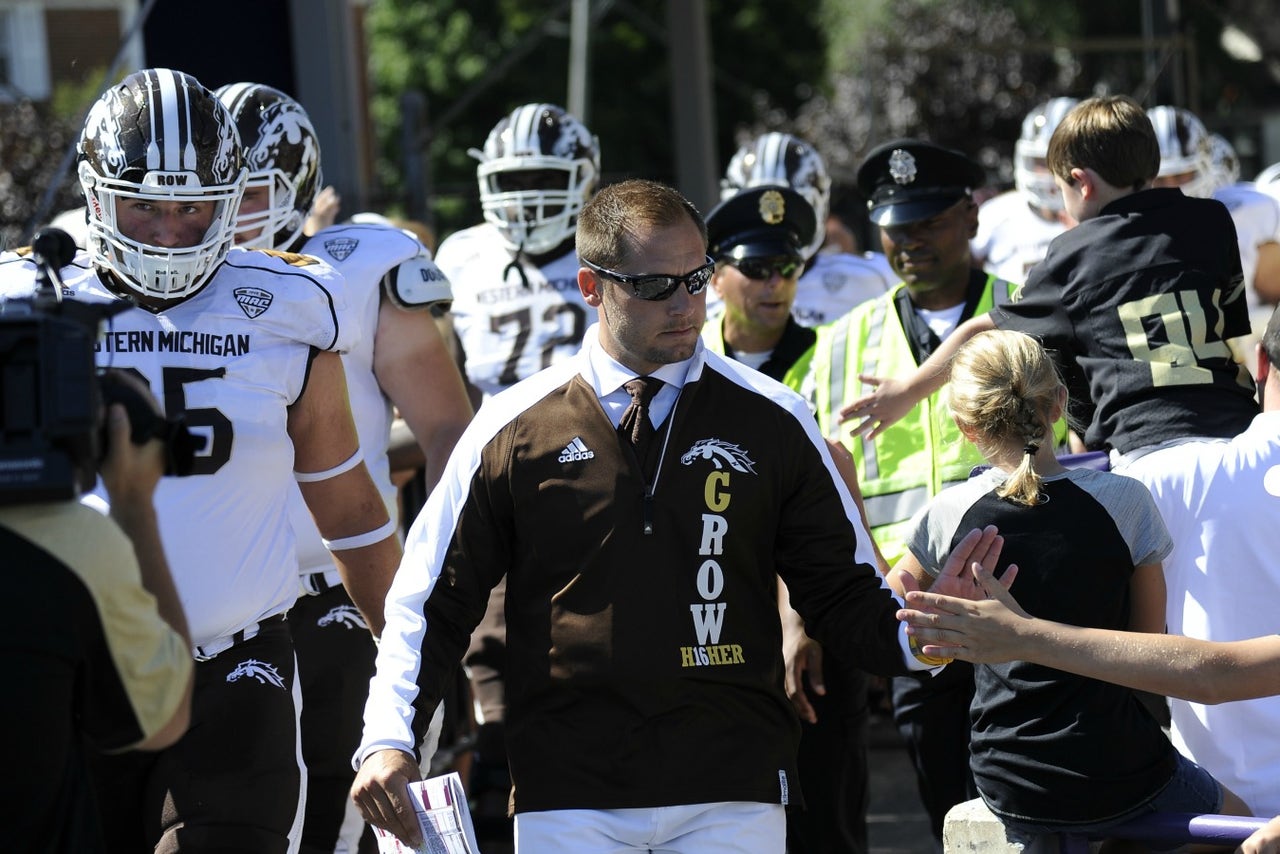 Western Michigan Broncos
share story
those were the latest stories
Want to see more?
View All Stories
Fox Sports™ and © 2020 Fox Media LLC and Fox Sports Interactive Media, LLC. All rights reserved. Use of this website (including any and all parts and components) constitutes your acceptance of these Terms of Use and Updated Privacy Policy. Advertising Choices. Do Not Sell my Personal Info