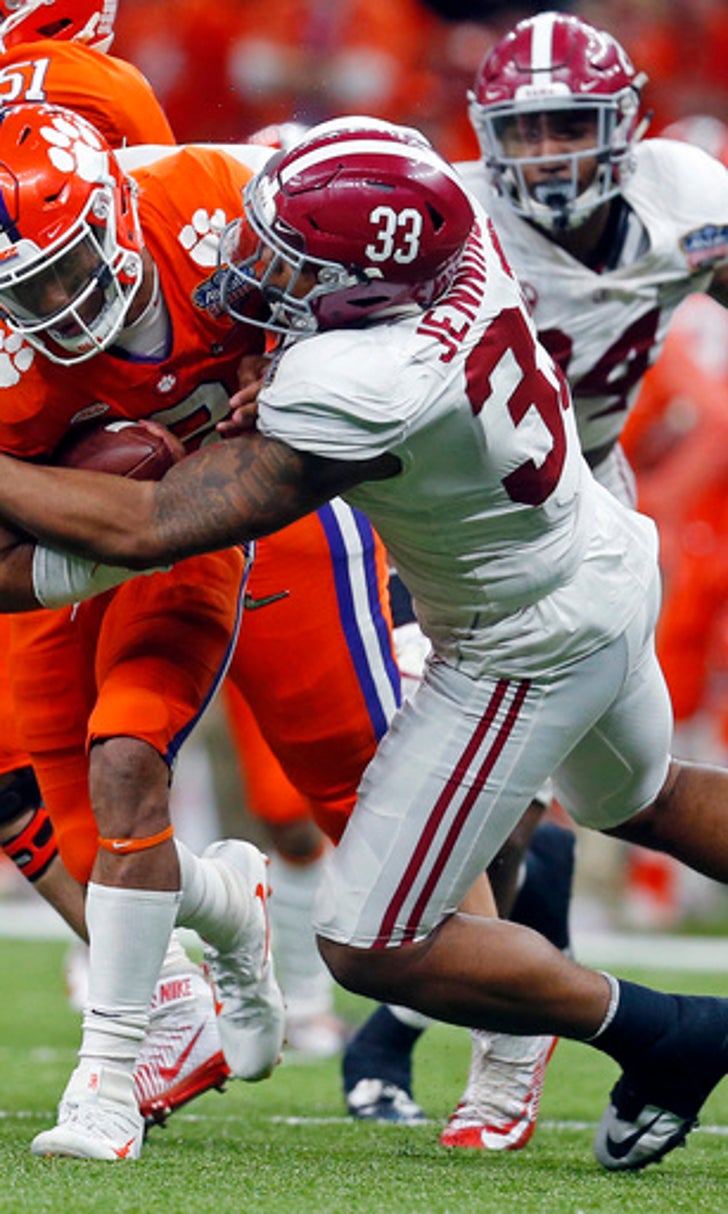 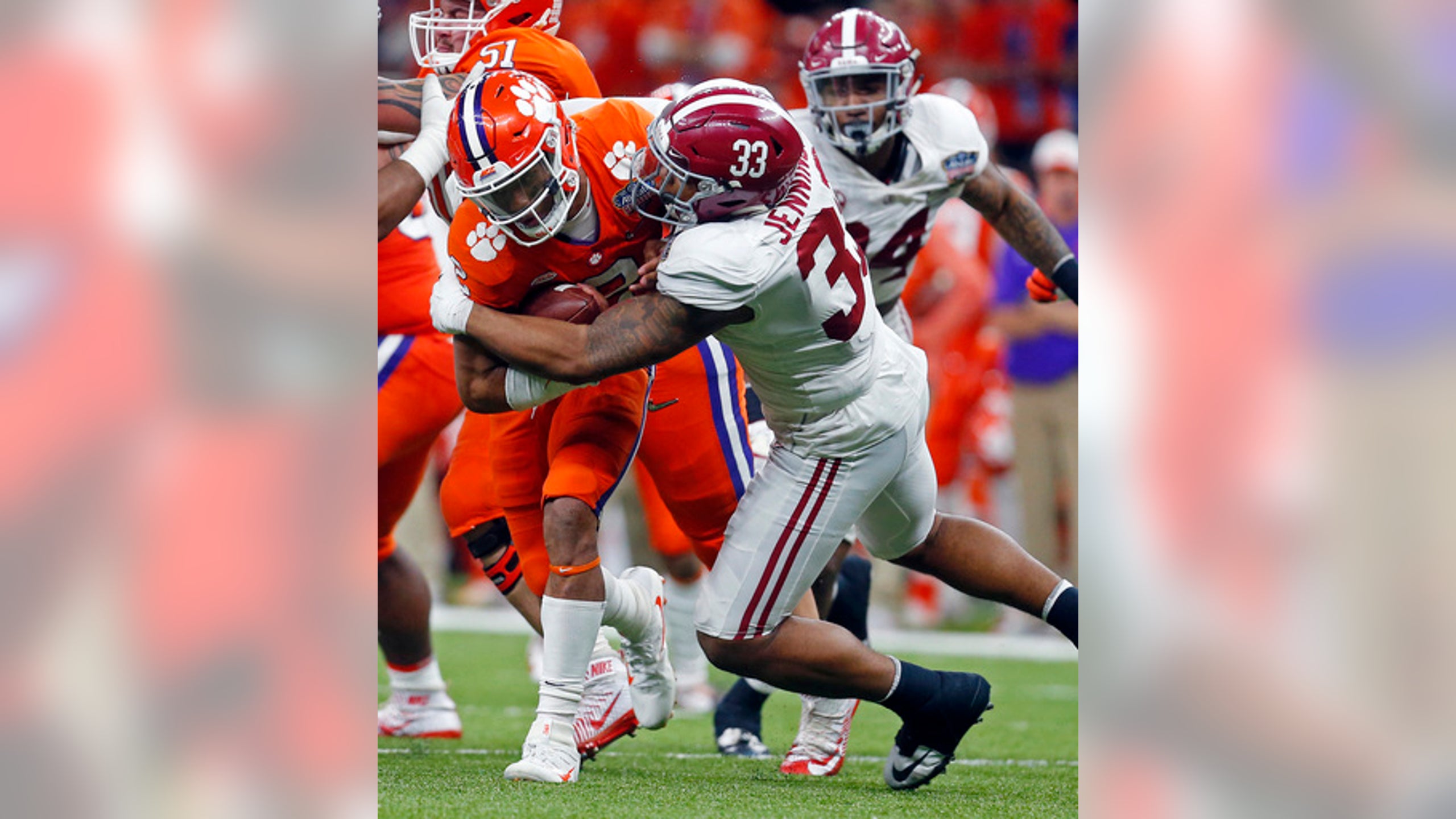 NEW ORLEANS (AP) Nick Saban is back in his comfort zone.

Let others run up the points. He'll take a defensive slugfest every time.

Especially when it gives Alabama another shot at a national title.

In a game where every yard was a struggle, the Crimson Tide defenders took matters into their own hands. They accounted for a pair of touchdowns just 13 seconds apart in the third quarter to turn an offensive slog into a 24-6 rout of defending national champion Clemson in the Sugar Bowl semifinal game Monday night.

''This game was about our identity as a team,'' Saban said. ''I don't think anybody would doubt our relentless attitude out there. We had a warrior-like mentality.''

He was clearly pleased.

Sure, it was quite a contrast to the first two meetings in the Alabama-Clemson trilogy, both high-scoring classics with the national title on the line , not to mention the Rose Bowl semifinal that preceded it. Georgia knocked off Oklahoma 54-48 in a double-overtime thriller that wasn't decided until the Alabama was on its second possession in the Big Easy.

There would be no drama in the nightcap. With Deshaun Watson off to the NFL, top-ranked Clemson (12-2) simply had no answer for the Tide's latest group of defensive standouts, setting up an all-Southeastern Conference showdown for the national title - with Saban matched against his former defensive coordinator, Georgia coach Kirby Smart.

Leading only 10-6 after a turnover to start the second half handed Clemson a field goal, the fourth-ranked Tide (12-1) quickly snuffed out any thoughts of a repeat title for the Tigers.

It began with 308-pound defensive tackle Da'Ron Payne picking off a wobbly pass after besieged Clemson quarterback Kelly Bryant was hit as he threw. Payne rumbled 21 yards on the return, shedding one would-be tackler with a deft open-field move and drawing a 15-yard personal foul penalty when he was finally dragged down with a horse collar tackle.

After Alabama drove to a first down at the Clemson 1, Payne re-entered the game - presumably to add another big body for blocking purposes. Instead, he slipped open near the right pylon on a play fake and hauled in a touchdown pass, even managing to get both feet down before the celebration commenced beyond the sideline.

''I've got gold hands,'' quipped Payne, who was picked as the game's defensive MVP.

A bit shell-shocked by that turn of events, Clemson was thoroughly demoralized after its next offensive play. Bryant's pass deflected off the hands of Deon Cain and was intercepted by linebacker Mack Wilson, who returned it 18 yards for another TD.

They could've called it right then.

''Just incredibly disappointed in our performance,'' Clemson coach Dabo Swinney said. ''But congratulations to Alabama. They were the better team today. No doubt about it.''

The Tide, which began the season in Atlanta beating Florida State , will return to Mercedes-Benz Stadium next Monday night to face No. 3 Georgia and give Saban a shot at his sixth title, which would match Bear Bryant.

Saban has four championships in the last eight years at Alabama, along with a BCS title at LSU during the 2003 season.

This is eerily reminiscent of Alabama's run to the 2011 championship, another season when the Tide didn't even win its own division or play for the SEC title. That year, Saban's team lost at home to LSU during the regular season but got a second chance against the top-ranked Tigers with the biggest prize on the line - in the Sugar Bowl, no less.

On that night in the Big Easy, Alabama defense didn't allow LSU to cross midfield until the closing minutes of a suffocating 21-0 victory. This defensive performance was nearly as impressive.

Clemson was held to 188 yards - 260 yards below its season average - and never reached the end zone. Bryant was sacked five times and the Tigers were held to 64 yards on the ground.

Alabama played it tough right to the end, denying Clemson on a fourth-down pass into the end zone with just over a minute remaining.

Clearly, the Tide was still ticked off about the way last season ended, giving up a TD pass with 1 second remaining to hand Clemson the national title.

Clemson receiver Hunter Renfrow was known as the Tide Killer.

After hauling in four TD passes in the last two national championship games - including, of course, the title winner a year ago - Renfrow was held to just 31 yards on five receptions. All of his catches came in fourth quarter with Alabama comfortably ahead.

''From the opening kickoff, they hit us in the mouth,'' Renfrow said.

Alabama: The Tide's defense against Georgia's offense will be an especially intriguing matchup given the way the semifinal games played out. One thing to keep an eye on: Anfernee Jennings was helped off with a sprained knee late in the game after recording a sack and three tackles for losses, another potential blow to the Tide's already beleaguered linebacker corps.

Clemson: The Tigers looked at this game as a chance to show they had surpassed Alabama as college football's most dominant program. Sorry, the Tide is still king.

Alabama: A national championship game to end the season for the third year in a row and sixth time in the last nine seasons.