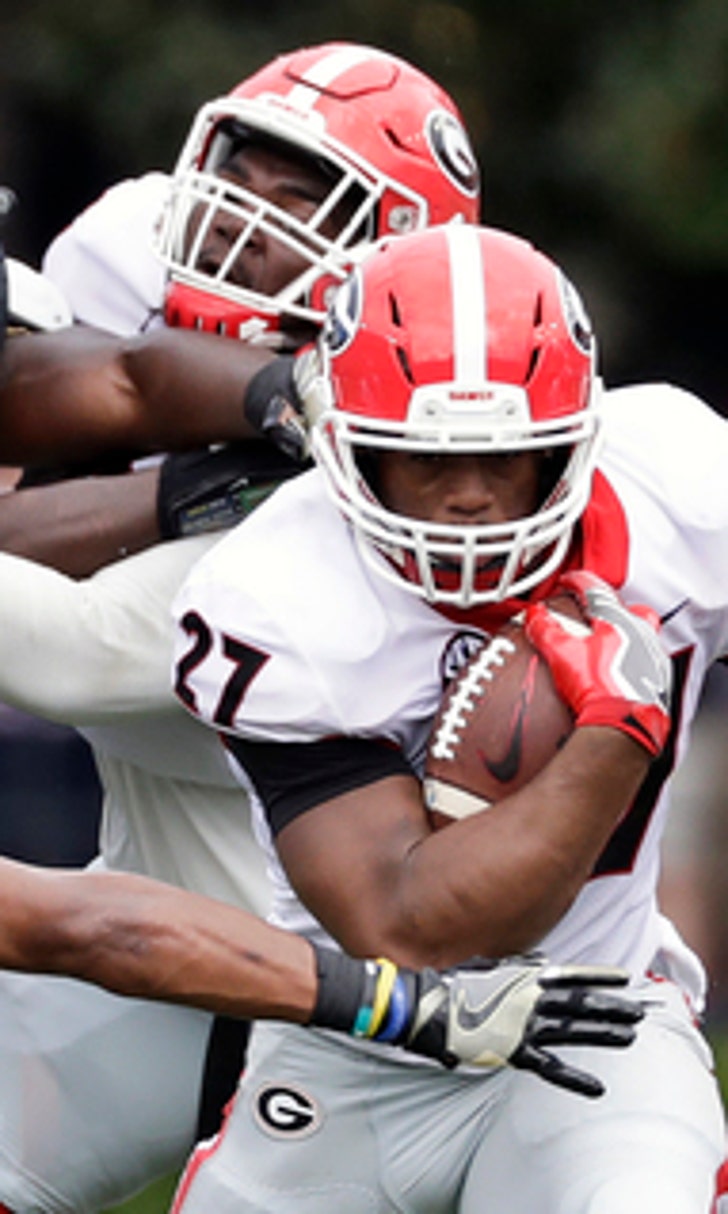 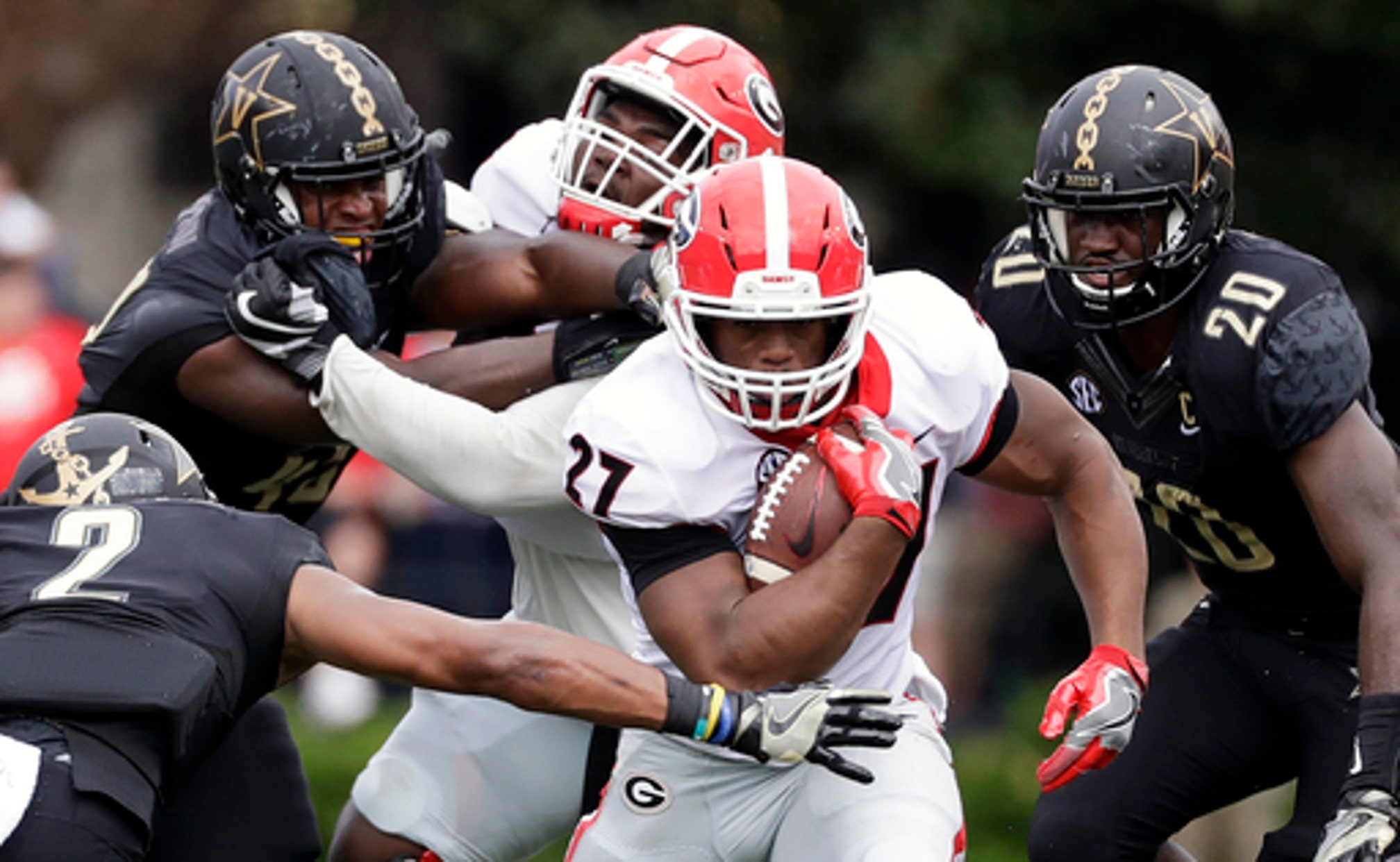 No. 2 Georgia thriving on deep running game led by Chubb

ATHENS, Ga. (AP) Nick Chubb has been given fewer carries per game this season than at any point in his Georgia career.

He couldn't be happier.

Chubb leads an unusually deep tailback corps that has powered No. 2 Georgia (8-0, 5-0 Southeastern Conference, No. 1 CFP ) into position for its best start in 35 years when it faces South Carolina on Saturday. A win would give the Bulldogs a 9-0 record for the first time since 1982.

Georgia may play as many as five tailbacks against the Gamecocks. The rotation keeps Chubb and Sony Michel, another senior, from compiling huge rushing totals which grab national attention.

That's more than fine with Chubb, which is proof he didn't return for his senior season to chase individual honors.

''I don't want it,'' Chubb said with a smile when asked Wednesday about being excluded from Heisman Trophy hype. ''They can keep it.''

Georgia would clinch the SEC's Eastern Division title and a spot in the SEC championship game if it beats South Carolina and Mississippi beats Kentucky on Saturday.

''This is what we all came back for,'' Chubb said.

Michel took a turn as the top back with 137 yards rushing and two touchdowns on only six carries in last week's 42-7 win over Florida . Chubb added 72 yards with one touchdown.

''They're NFL backs, to be honest,'' said South Carolina defensive back Chris Lammons. ''If we want to win this game, we just have to stop them.''

D'Andre Swift, Elijah Holyfield and Brian Herrien have shared carries with the seniors. That depth has kept the backs fresh for the Bulldogs' late-season push for conference and national championships.

Georgia coach Kirby Smart said the group is ''probably deeper'' than any other he has coached. As Georgia's running backs coach in 2005, his backs included Thomas Brown, Kregg Lumpkin, Danny Ware and Tyson Browning.

`'I mean, when you start talking about five-deep, I've been around a lot of good four-man rotations, but five is pretty special,'' Smart said.

Chubb is the leader. His 4,189 yards rushing trail only Herschel Walker on Georgia's career records. Michel is fifth with 3,040 yards. Each could reach 1,000 yards this season.

The Bulldogs are determined to establish the running game, even when defenses stack the line against the run. Georgia has the most carries in the SEC and trails only No. 1 Alabama in yards rushing.

As a team, Georgia is averaging six yards per carry despite running against defenses focused on stopping the run.

''It says a lot,'' said fullback Christian Payne. ''That's our mindset going into every game. We're going to run the ball. It really doesn't matter how many people you put in the box, we're still going to try to run the ball.''

Even Georgia's receivers are taking pride in the dominant running attack.

''We know the game plan going in,'' said receiver Terry Godwin. ''Once the running game gets started, we can come in with the pass if we need it, but if we don't we can keep running. As far as the rest of the receivers, we love that. That way we get to show off our tailbacks.''

Chubb's workload has been consistent with 13 to 16 carries in every game. By comparison, he had five games with at least 20 carries last season.

Chubb said he feels fresher than at this point last year.

''I feel great,'' he said. ''I feel better now than I did at the end of the season. It's how we've been sharing the load and not playing full games. That also helps. We're doing a good job taking care of everybody.''

College Football's Top Plays: Week 13 - Friday
The Friday after Thanksgiving features an exciting slate of college football. Check out all the top plays, as they happen!
2 hours ago

Lurking Or Overlooked?
BYU is 9-0, but they're only 14th in the CFP rankings. And coach Kalani Sitake had thoughts on Breaking The Huddle.
22 hours ago

College Football's Top Plays: Week 12
From thrilling Top 25 matchups to an Oscar-worthy flop and Michigan's OT escape, check out Saturday's best moments!
5 days ago
those were the latest stories
Want to see more?
View All Stories
Fox Sports™ and © 2020 Fox Media LLC and Fox Sports Interactive Media, LLC. All rights reserved. Use of this website (including any and all parts and components) constitutes your acceptance of these Terms of Use and Updated Privacy Policy. Advertising Choices. Do Not Sell my Personal Info