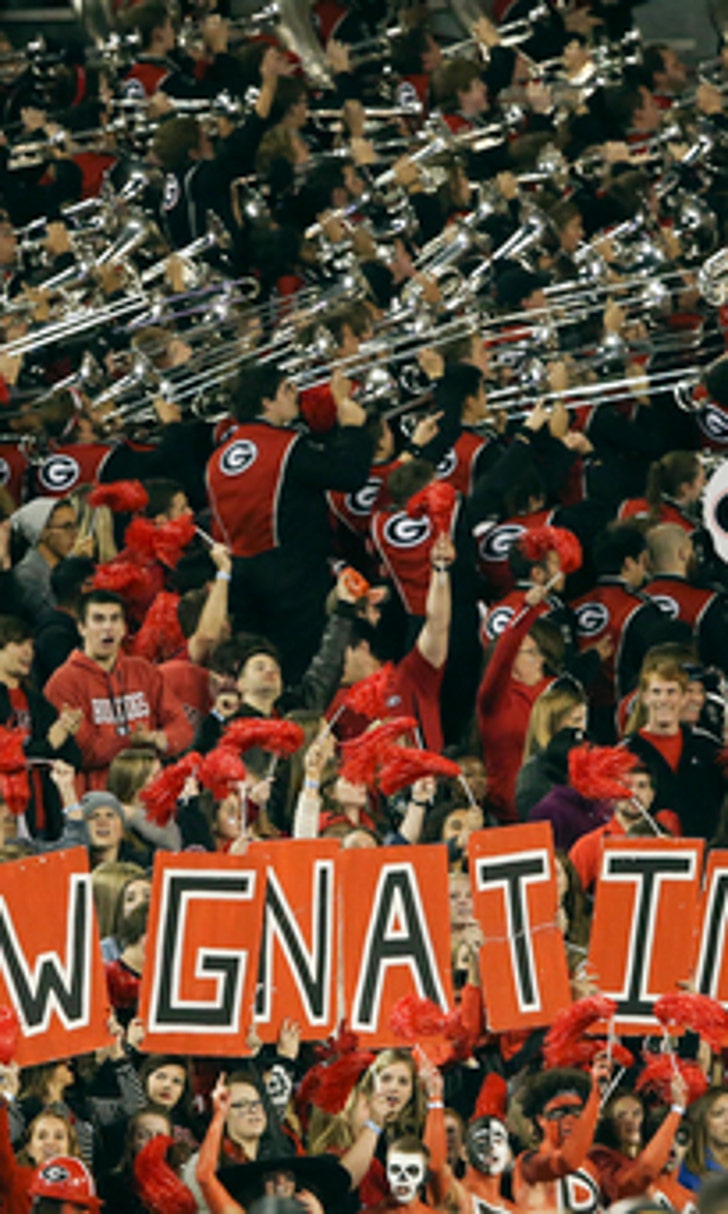 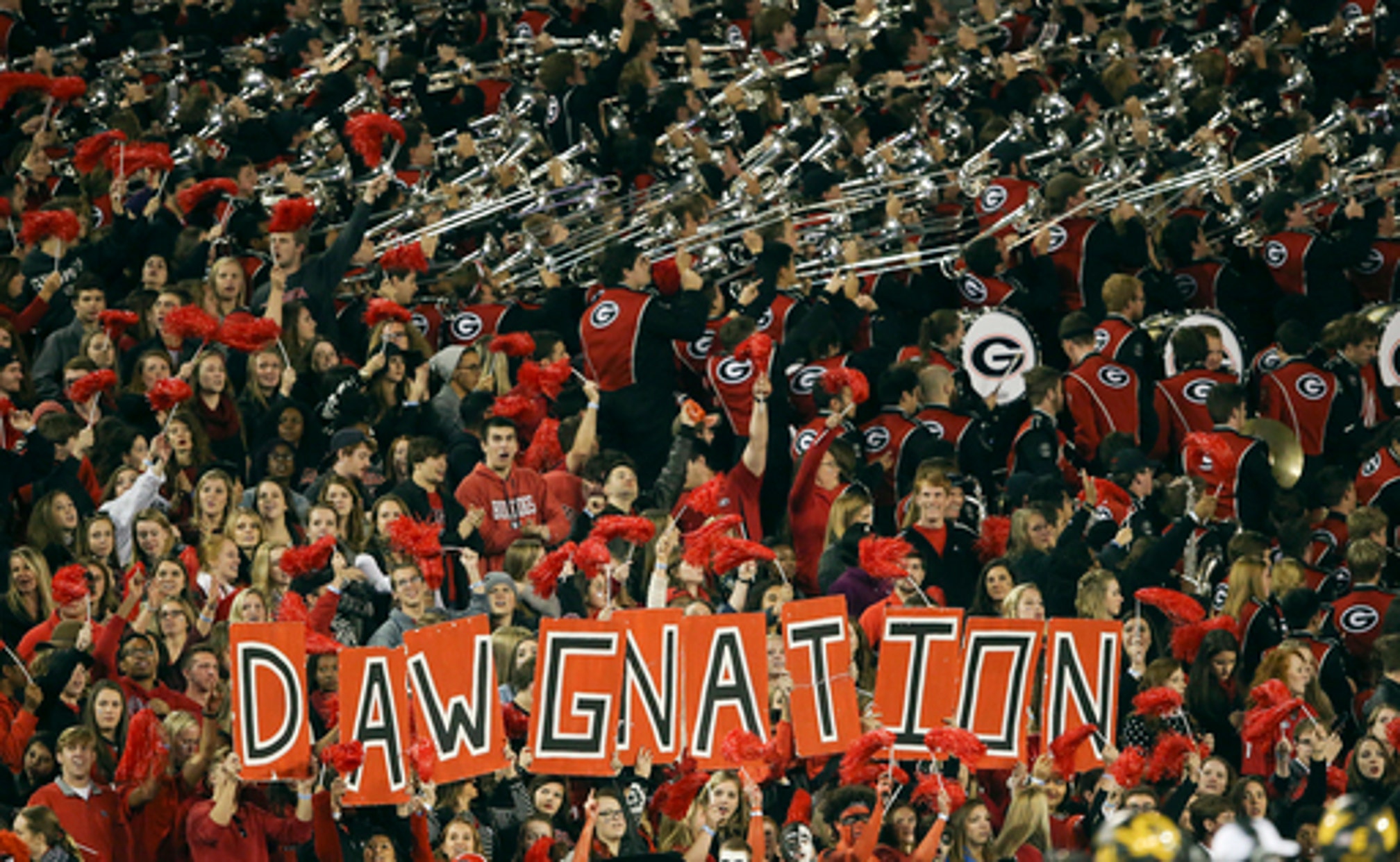 SOUTH BEND, Ind. (AP) A September nonconference game on the campus of a team that went 4-8 the previous season has surely never before drawn this amount of interest from Georgia fans.

Such is the power of Notre Dame. No matter the condition of Fighting Irish, the chance to see Touchdown Jesus signal a score in person will always be a big deal for college football fans.

The first-regular season meeting between Georgia and Notre Dame on Saturday night is the most-anticipated road trip the Bulldogs have made in decades.

''This has been the most difficult ticket I have seen during my years at UGA,'' said associated athletic director Claude Felton, who has been with the University of Georgia sports information department since 1979. ''There are large numbers of Bulldog supporters heading to South Bend with no tickets. They just want to be part of the experience.''

Georgia received - and quickly sold - 8,000 tickets for the game at Notre Dame Stadium. Secondary market ticket prices were in the $1,600 range during August, though fans that waited it out could have snagged a nose-bleed seat Thursday for $500 on StubHub.

The red and black of Georgia started pouring into South Bend on Thursday, and Bulldogs fans were making their presence felt. At the restaurant in which Notre Dame coach Brian Kelly does his weekly radio show, he was greeted by dozens of Georgia fans, Calling the Dawgs .

''We know there's going be some black and some red in the stands, we get that,'' Kelly said.

Some of the out-of-towners were trying to turn the weekend into a sports bucket-list marathon, catching a Cubs game at Wrigley on Friday and the Atlanta Falcons - fortuitously enough - at Soldier Field against the Bears on Sunday. South Bend is about 95 miles from Chicago.

''I know our fan base is really excited. Our team is excited,'' Georgia coach Kirby Smart said. ''I mean it will be the first team ever from Georgia to get to go to South Bend and play and we are excited for that opportunity.''

As an event, No. 15 Georgia (1-0) vs. No. 24 Notre Dame (1-0) is a rare opportunity for Bulldogs fans. As far as the game goes, however, it is far more important for the home team. Coming off last season's flop, and the ensuing offseason overhaul of the program by Kelly, the Irish could use an early statement victory to settle everybody's nerves, quell the message board calls for a coaching change and take a big step toward burying bitter memories of 2016.

Just don't call it a validation game. Kelly is having none of that.

''We've got a long way to go. Our football team will continue to grow. Will continue to work toward the things that we've asked them to work towards. We're only in our second game. I like what I saw in our first game. There's no question we expect to win the game,'' Kelly said.

Things to know about the first meeting of Georgia and Notre Dame since the Bulldogs beat the Irish in the 1981 Sugar Bowl to win the national title:

Not the ideal spot for a freshman quarterback to make his first start, but that's what lies ahead for Jake Fromm of Georgia. He played well last week in a home rout of Appalachian State after relieving the injured Jacob Eason (knee). Fromm is a Georgia native and a natural leader.

''If you guys knew how well this guy prepares, as a student of the game, even in the summertime in seven-on-seven,'' Georgia linebacker Davin Bellamy said. ''The guy is the real deal.''

Notre Dame had three 100-yard rushers last week in an easy victory against Temple, including quarterback Brandon Wimbush, a junior making his first start. Georgia got a combined 183 yards rushing and three touchdowns from the running back duo of Nick Chubb and Sony Michel.

Kelly is 7-11 at Notre Dame when both teams are ranked, and the Irish have lost six of their last eight games against ranked foes.

PASS ON THE TRASH

While some Bulldogs players sounded psyched to play at a tradition-rich program such as Notre Dame, Georgia safety Dominick Sanders was unimpressed. Sanders told reporters earlier in the week that his only concern was ''punishing'' the Fighting Irish from the start. A few Notre Dame players got a chance to fire back, but passed.

''You know, it's just one of those things that they can say what they want to say, and we'll just stick to what we're doing,'' Notre Dame tackle Mike McGlinchey said.