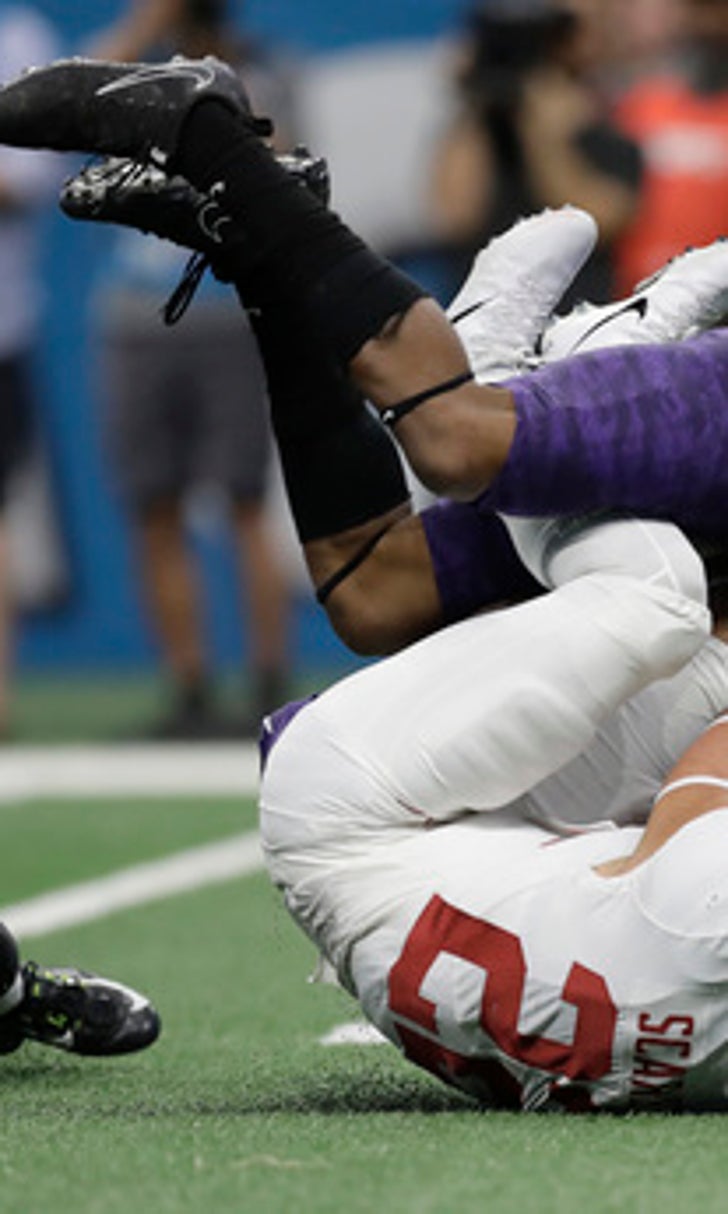 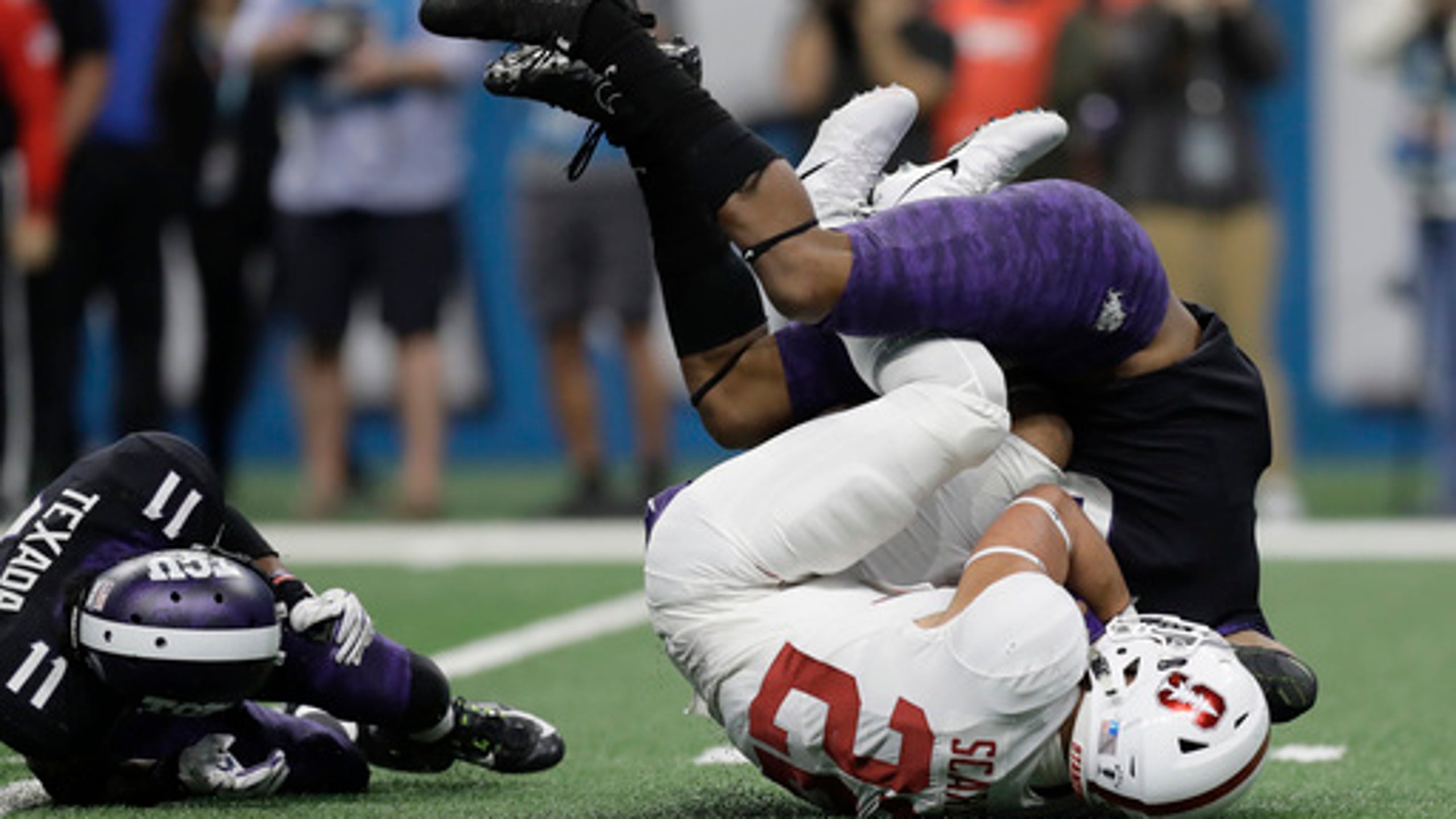 SAN ANTONIO (AP) There is something about TCU and big comebacks in the Alamo Bowl. Never count out the Horned Frogs.

In 2015, they stormed back from down 31-0 to win. They did it again Thursday night, rallying from 21-3 down to beat No. 15 Stanford 39-37 behind Kenny Hill, who passed for two touchdowns, ran for another, and even caught one. Cole Bunce kicked the winning 33-yard field goal with just over 3 minutes left after Stanford had retaken the lead.

''The bottom line is we need to start faster,'' TCU coach Gary Patterson joked after the game. ''We fought back tonight.''

Hill landed the biggest punches. He scored the Horned Frogs' first touchdown on a 6-yard scramble. His 27-yard TD catch on a throw from receiver Desmon White capped No. 13 TCU's first drive of the second half.

And Hill's 93-yard touchdown pass to Jalen Reagor in the fourth quarter sent a charge through an Alamodome crowd that was dominated by TCU fans.

It was the second time this season Hill had a rushing, passing and receiving touchdown, providing a memorable finale to his college career. Hill began his career at Texas A&M, where he succeeded Heisman Trophy winner Johnny Manziel in 2014, but transferred to TCU (11-3) after a rocky first season with the Aggies.

''To come back to win (tonight) with this group of guys who accepted me from the minute I came in, means everything to me,'' said Hill, who had 314 yards passing and a team-high 60 yard rushing.

Bryce Love, a Heisman Trophy finalist, rushed for 145 yards for Stanford (9-5), including a 69-yard touchdown run in the third quarter. K.J. Costello threw three touchdown passes to J.J. Arcega-Whiteside, the last one giving Stanford a 37-36 lead.

Hill completed three passes on TCU's winning drive. The Horned Frogs sealed the victory with an interception by Innis Gaines with 2:01 left.

Love finished with the season with 2,118 yards rushing, setting a Stanford single-season record.

TCU: The Horned Frogs defended Love about as well as anyone this season despite the long touchdown run. Most important, they didn't let him take over in the second half, which let Hill and the offense rally. When the Stanford running game wasn't working, the TCU defense could get after Costello, who struggled under pressure after his quick start.

Stanford: The Cardinal were doomed by the big play just when they had a chance to put the game away. After pinning TCU deep, Hill found Reagor for the long TD pass early in the fourth quarter. White, who earlier had a costly fumble, then gave TCU its first lead with a punt return touchdown.

''He outkicked his coverage. I saw green and took off running,'' White said.

''We really want a lot of those plays back. Those long drives and a couple big plays, they caught back up really quick,'' Stanford defensive tackle Harrison Phillips said.

ON TO NEXT YEAR

TCU: Coach Gary Patterson has his program humming with 40 wins over the last four seasons, and the Horned Frogs expect to remain Big 12 title contenders even as Hill moves on after his final game. The Horned Frogs will have to find a new quarterback, but Patterson's teams always play some of the best defense in the league.

Stanford: Love will have to decide his future and whether that will mean another year of school for the biology major and aspiring pediatrician with an interest in stem cell research, or a jump to the NFL. The trend has seen top players leave early, but Love already bucked the latest fad by choosing to play in his team's bowl game as he ponders his decision.

Coach David Shaw said this week he hopes Love will return next season. If he does, pencil in the Cardinal as a Pac-12 favorite again.

''A lot of guys have some decisions to make, whether they will leave or not. But I'm so excited about what we have coming back on this football team,'' Shaw said. ''I think we'll make a huge jump.''

TCU hosts Southern in its 2018 opener.