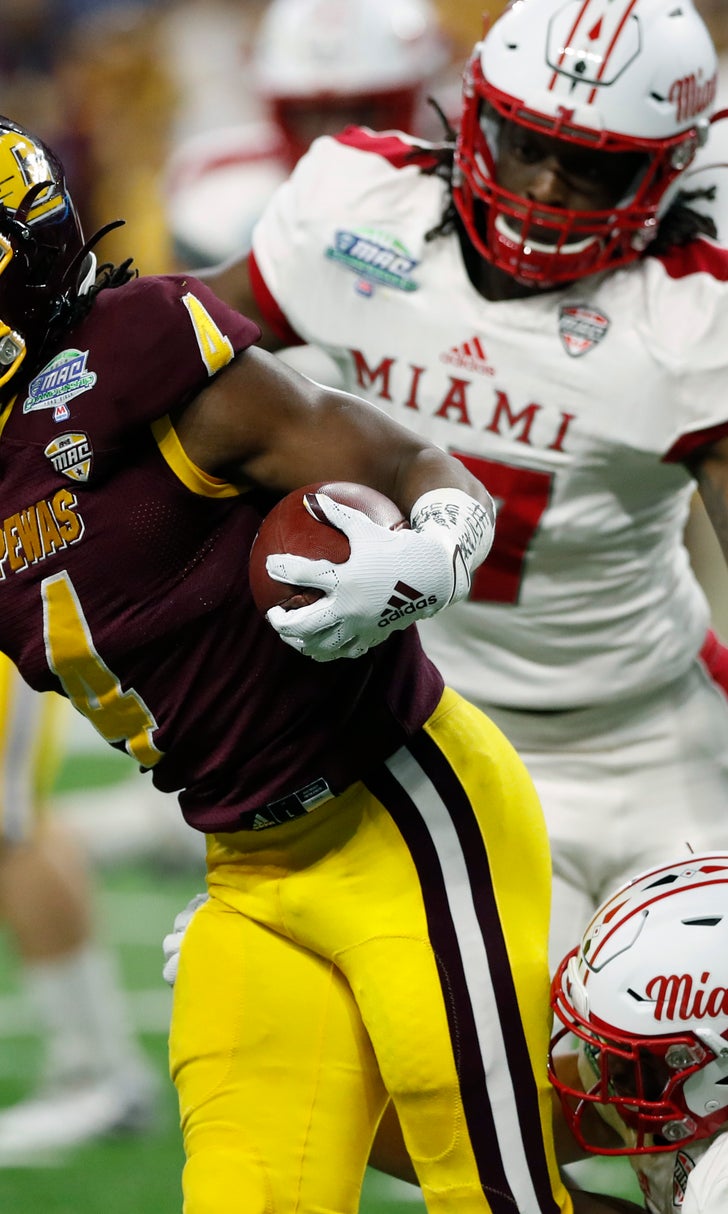 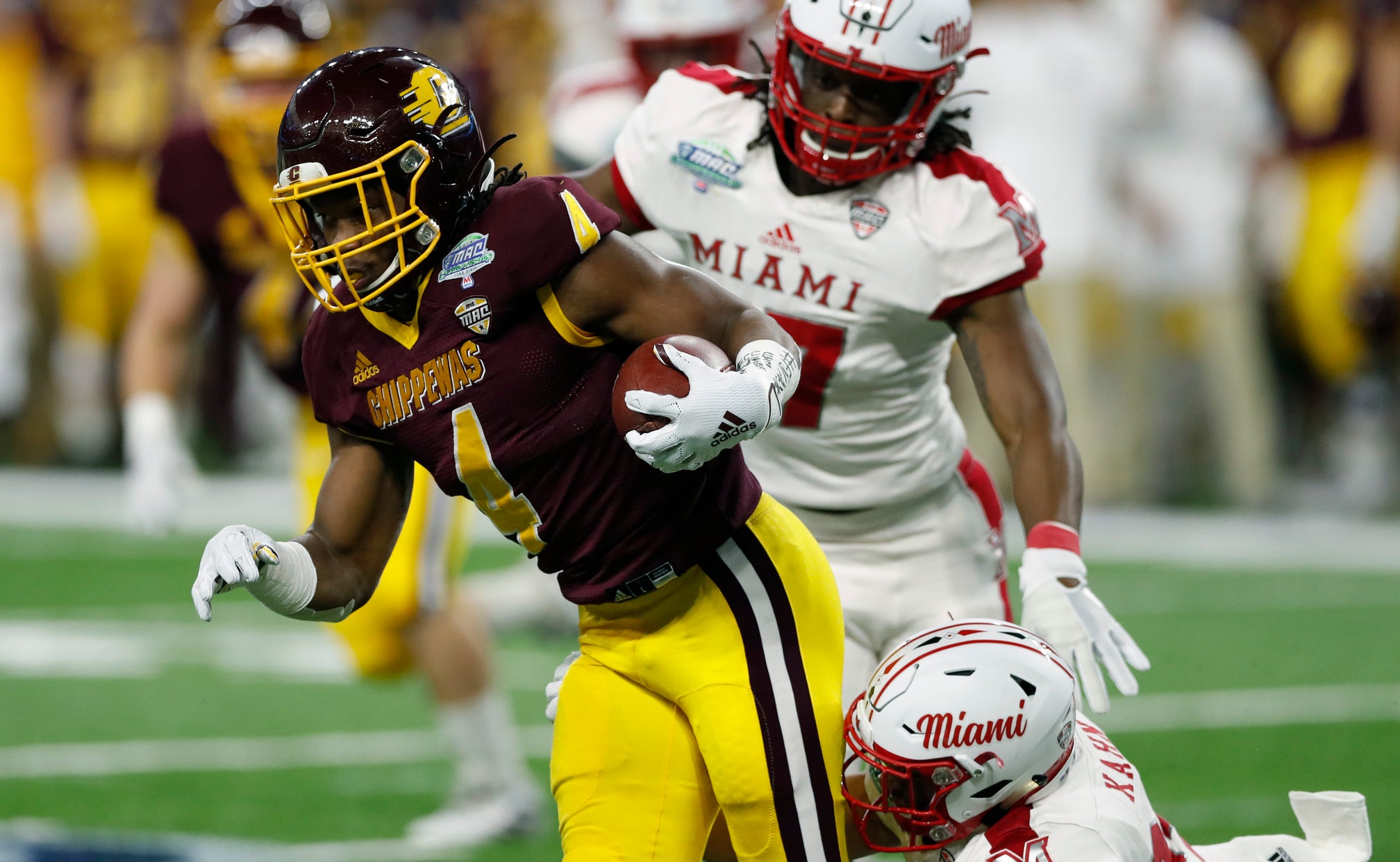 “I told the kids at halftime, down 14-10, I said, ‘It feels kind of at home guys,'" Martin said. “‘Kind of a little bit ugly, make a couple plays here and there. They probably feel like they should be up by more, but they're not up by more.'"

Brett Gabbert threw a 31-yard touchdown pass to Jack Sorenson early in the third quarter, and Miami controlled most of the second half, beating Central Michigan 26-21 in the Mid-American Conference title game Saturday. The RedHawks won a record 16th MAC championship despite doing little on offense in the first half.

Trailing 14-10 after two quarters, Miami took the lead on Gabbert's screen pass to Sorenson, and the RedHawks (8-5) held off CMU (8-5) the rest of the way to win their first conference title since 2010.

Five of Miami's last six victories this year have been by seven points or fewer.

Sam Sloman kicked four field goals, including a 48-yarder with 4:06 remaining to give Miami a 23-14 lead. CMU's Tommy Lazzaro scored on a 4-yard run with 1:24 remaining, and the Chippewas recovered an onside kick — but were called offside. CMU was offside again on the re-kick, but it went out of bounds anyway, and Miami took over.

“I was ready for those last 30 seconds to be over," Sloman said.

A Hail Mary by CMU fell incomplete on the final play of the game.

Miami managed just 61 yards of offense in the first half but stayed in the game thanks to a couple big plays on special teams. Maurice Thomas returned the opening kickoff 97 yards, setting up a 1-yard touchdown run by Jaylon Bester.

CMU equalized on a 21-yard scoring run by Lazzaro, but in the second quarter, the Chippewas had a fake punt stopped at their own 19. That allowed the RedHawks to take a 10-7 lead on Sloman's 41-yard field goal.

“As I told the team coming into the game, it wasn’t like we were going to carry anything and not use it. We were going to empty our bags," CMU coach Jim McElwain said of the unsuccessful trick play. “We had the look. Credit them, they defensed it. The numbers were good. We just didn’t get it done."

CMU went ahead for the first time on Quinten Dormady's 11-yard touchdown pass to Tyrone Scott with 30 seconds left in the half.

The Chippewas were trying to win their first MAC title since 2009. This was their first loss in a MAC championship game. CMU had won its previous three appearances.

Down 20-14 in the fourth quarter, the Chippewas drove to the Miami 27, but Dormady's pass was intercepted by Travion Banks.

Banks appeared to run the interception all the way back for a touchdown, but a penalty during the return brought the ball back to the Miami 11. Soon after that, CMU's Troy Brown was ejected for targeting, and the RedHawks were able to drive into field goal range.

Miami: The RedHawks needed a strong defensive performance to win, and they got one — plus plenty of help on special teams. Miami seemed to be in trouble at halftime, but the RedHawks were much sharper offensively in the final two quarters.

CMU: The Chippewas did well just to make the championship game after going 1-11 last season, but this was a winnable game that got away during the second half.

“I thought up front, they did a really good job handling what we were trying to do," said McElwain, who is in his first season as CMU's coach. “They had a good plan. They just beat us."

“I know Don had a huge impact on, just not the football team, but all of Central Michigan," receiver Kalil Pimpleton said. “We was out there playing for him. Regardless of whether we lost, I know he was proud of us."

Miami: The RedHawks rank first in MAC history with seven bowl wins and will hope to add to that total this season.

CMU: The Chippewas can also expect a bowl bid.

Buckeyes Dominate in Debut
Justin Fields and Ohio State found their footing in the second half en route to a demolition of Nebraska on Saturday.
4 days ago

Rolling Over the Defense
After a dominant performance in a win over Georgia, Reggie Bush named Alabama's DeVonta Smith his 'Playmaker of the Week.'
5 days ago
those were the latest stories
Want to see more?
View All Stories
Fox Sports™ and © 2020 Fox Media LLC and Fox Sports Interactive Media, LLC. All rights reserved. Use of this website (including any and all parts and components) constitutes your acceptance of these Terms of Use and Updated Privacy Policy. Advertising Choices. Do Not Sell my Personal Info