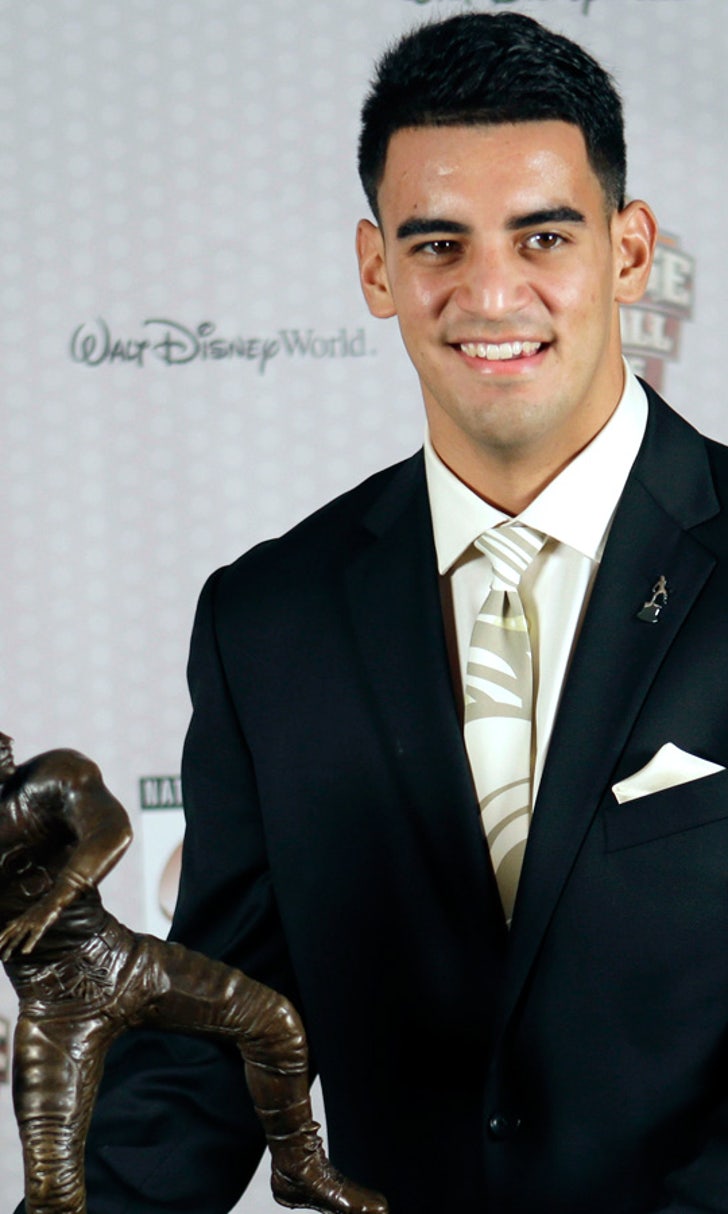 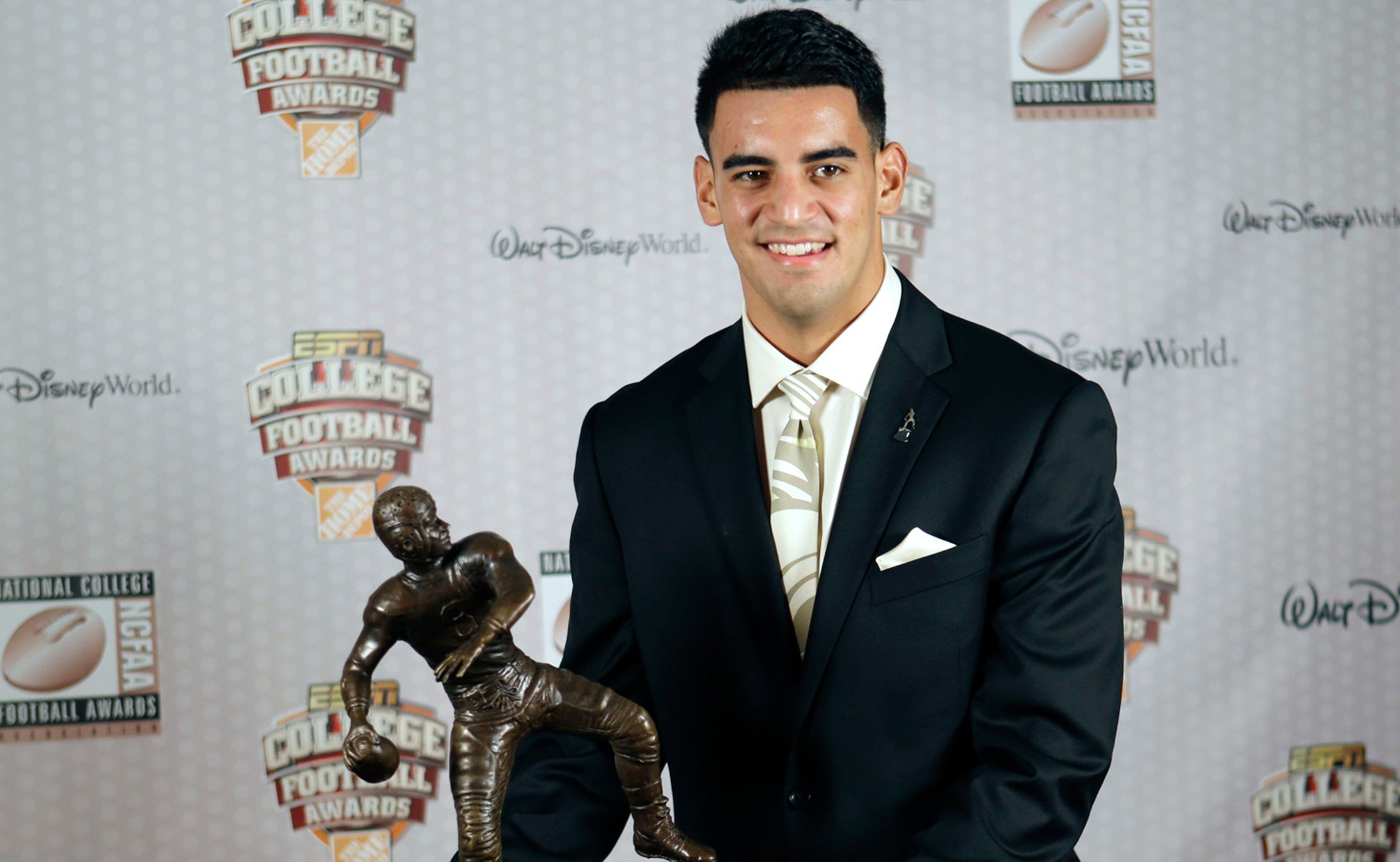 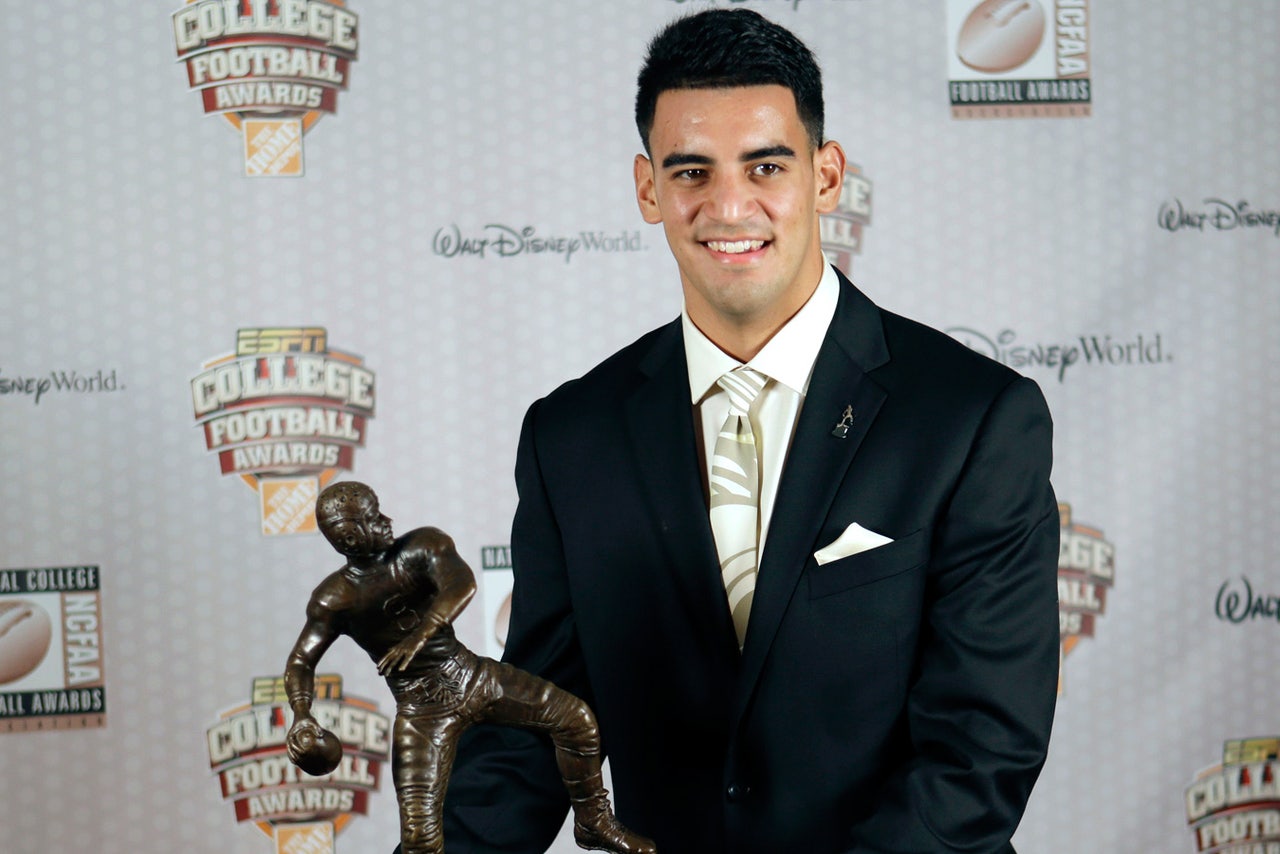 Marcus Mariota had himself quite a Thursday night.

Mariota also won the Walter Camp player of the year award on Thursday in a separate announcement.

Mariota was selected over finalists Trevone Boykin of TCU and Prescott for the Davey O'Brien, becoming the first Oregon player to win it and second Pac-12 player in the past four seasons, joining 2011 winner Andrew Luck of Stanford.

Taking home the Davey O'Brien award is good sign for Mariota, a Heisman Trophy finalist: The past four winners have gone on to win the Heisman.

Mariota leads the nation in passing efficiency (186.3) and has accounted for a Pac-12 record 53 touchdowns, including 38 touchdown passes. He led the Ducks to the first College Football Playoff, where they will be the second seed and play Florida State on Jan. 1.

On Saturday night, Mariota hopes to become the first player to win the Maxwell Award and the Heisman Trophy in the same season since Auburn quarterback Cam Newton in 2010.

OTHER WINNERS FROM THURSDAY'S AWARDS SHOW

Alabama's Amari Cooper won the Biletnikoff Award as the nation's outstanding receiver, becoming the first Alabama player to win the award. He joined LSU's Josh Reed in 2001 as the only SEC players to win it.

Wisconsin's Melvin Gordon won the Doak Walker Award, given to the nation's top running back.

The junior is the third Badgers player to win the award, joining 1999 winner Ron Dayne and 2012 winner Montee Ball. Gordon is the seventh player from the Big Ten Conference to claim the honor.

Gordon ran for 2,336 yards and 26 touchdowns this year. Entering the Outback Bowl against Auburn on Jan. 1, he is 292 yards shy of Barry Sanders' NCAA single-season rushing record.

Scherff was the Big Ten Offensive Lineman of the Year in 2014. He was also selected first-team All-Big Ten for the second consecutive year, becoming the first Hawkeyes player to do that since Shaun Prater.

Holliman had a Football Bowl Subdivison-best 14 interceptions this season, trying the NCAA record. He also had 37 tackles as part of a Cardinals' defense that ranked sixth in the FBS total defense. He was selected over finalists Landon Collins of Alabama and Oregon's Iko Ekpre-Olomu.

The Australian-born punter is the first Utah player and the first from the Pac-12 to win the award.

Hackett placed 35 of his 77 punts this season inside the 20-yard line, and six punts inside the 5. He ranked second in the nation with 3,619 total yards on punts.

He's the first Maryland player to win the award.

Craddock made a school-record 57-yarder against Ohio State, and 18 of his 19 field goals overall this season.

Arizona linebacker Scooby Wright won the Chuck Bednarik Award, given to the nation's defensive player of the year.

He joins USC linebacker Rey Maualuga in 2008 as the only Pac-12 players to win the award. Wright also won the Lombardi Award on Wednesday night as the nation's best lineman, and the Bronko Nagurski Award on Monday night as the top defensive player in college football. In addition, he was the Pac-12 Defensive Player of the Year.

Wright was selected over Bednarik finalists Vic Beasley of Clemson and Joey Bosa of Ohio State.

TCU coach Gary Patterson was given the Home Depot coach of the year award.