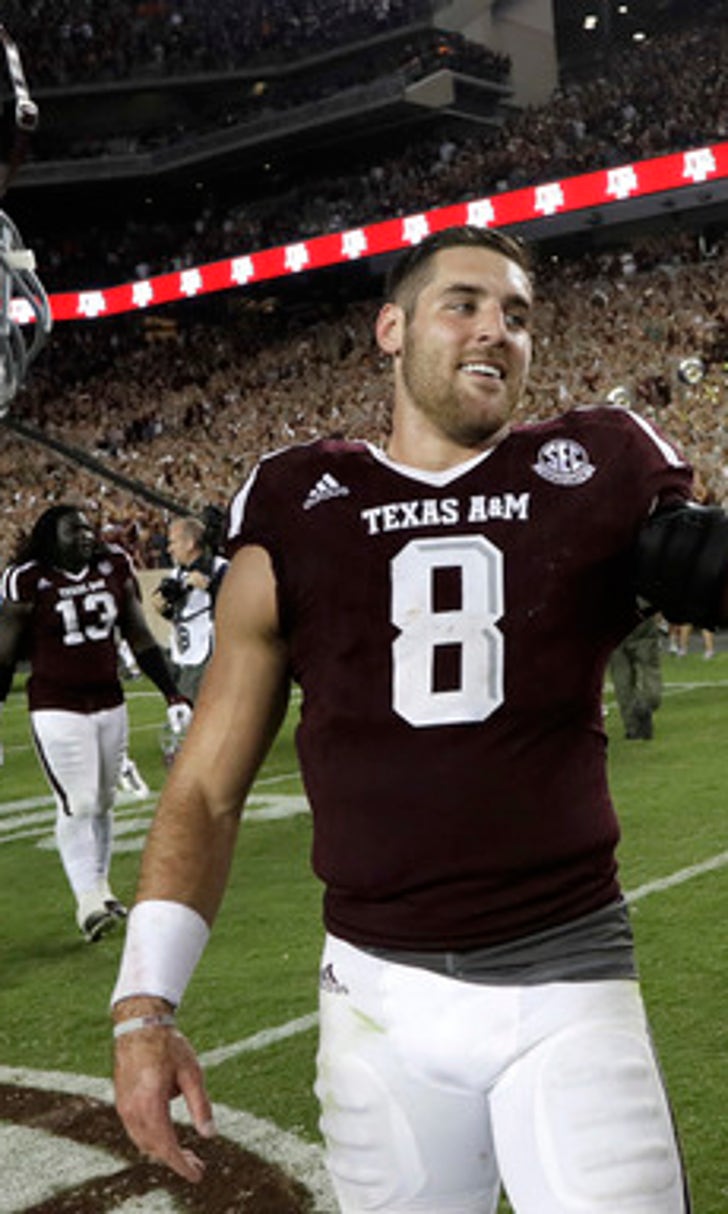 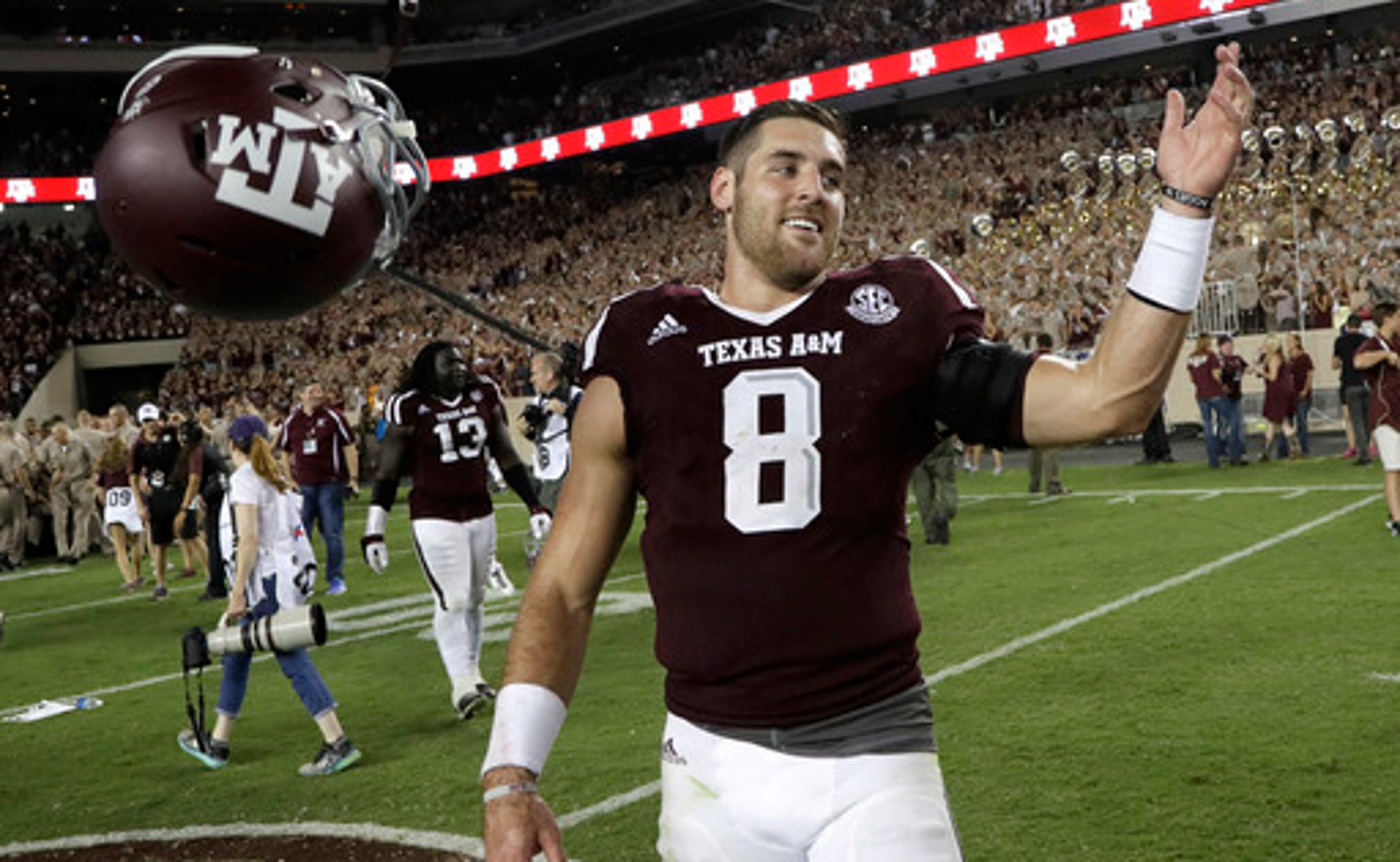 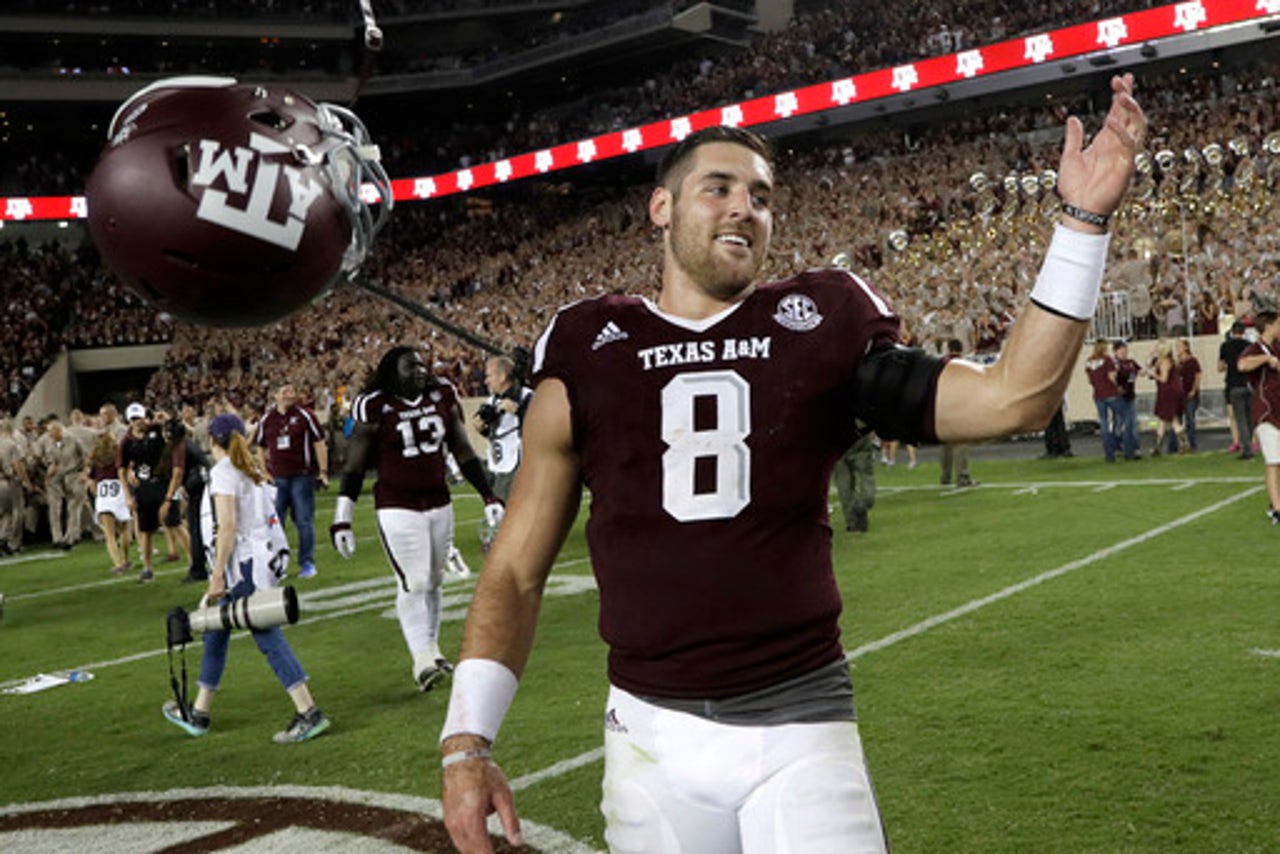 COLLEGE STATION, Texas (AP) Trevor Knight had a 1-yard touchdown run in the second overtime and No. 8 Texas A&M withstood another late Tennessee rally to beat the No. 9 Volunteers 45-38 on Saturday.

After Knight bulled in for the touchdown, Armani Watts intercepted Joshua Dobbs' pass on the next play for Tennessee's seventh turnover to end the game.

The teams exchanged field goals in the first overtime.

Knight threw for 239 yards and two touchdowns and ran for 110 yards and three more scores.

The Volunteers (5-1, 2-1 Southeastern Conference) had rallied from double-digit deficits to win four of their last five games, including last week's last-play victory over Georgia. They trailed by 21 points in the third quarter Saturday thanks to six turnovers before tying it on Alvin Kamara's 18-yard touchdown reception with 41 seconds left.

Texas A&M (6-0, 4-0) had a chance to win it in regulation, but Daniel LaCamera's 38-yard field goal attempt sailed wide left.

The Aggies could have put this one away with less than 2 minutes remaining, but freshman Trayveon Williams had the ball knocked from his hands and out of the back of the end zone just before he crossed the goal line on a 71-yard run.

Texas A&M was facing third-and-2 when Knight dashed 62 yards for a touchdown that pushed the lead to 35-21 with about three minutes left. Kamara's 4-yard run about a minute later made it a one-score game.

The Aggies built a 21-7 lead in the first quarter after three fumbles by Tennessee. Knight threw touchdown passes of 13 and 2 yards and had a 7-yard TD run in the opening frame.

Saturday continued a trend of bad starts for the Volunteers, who have been outscored 62-17 in the first quarter this season.

TENNESSEE: The Volunteers finally learned that they can't give good teams such a big cushion and expect to come back again and again. They'll have to find a way to get off to a better start and cure their turnover woes if they expect to compete with No. 1 Alabama next week.

TEXAS A&M: Texas A&M's defense again showed it is the strength of this team by forcing the flurry of turnovers and pressuring Dobbs all day long. The offense needs to be more consistent for the Aggies to have a chance to topple Alabama in two weeks.

TEXAS A&M: Texas A&M has a week off before traveling to face the top-ranked Crimson Tide on Oct. 22.