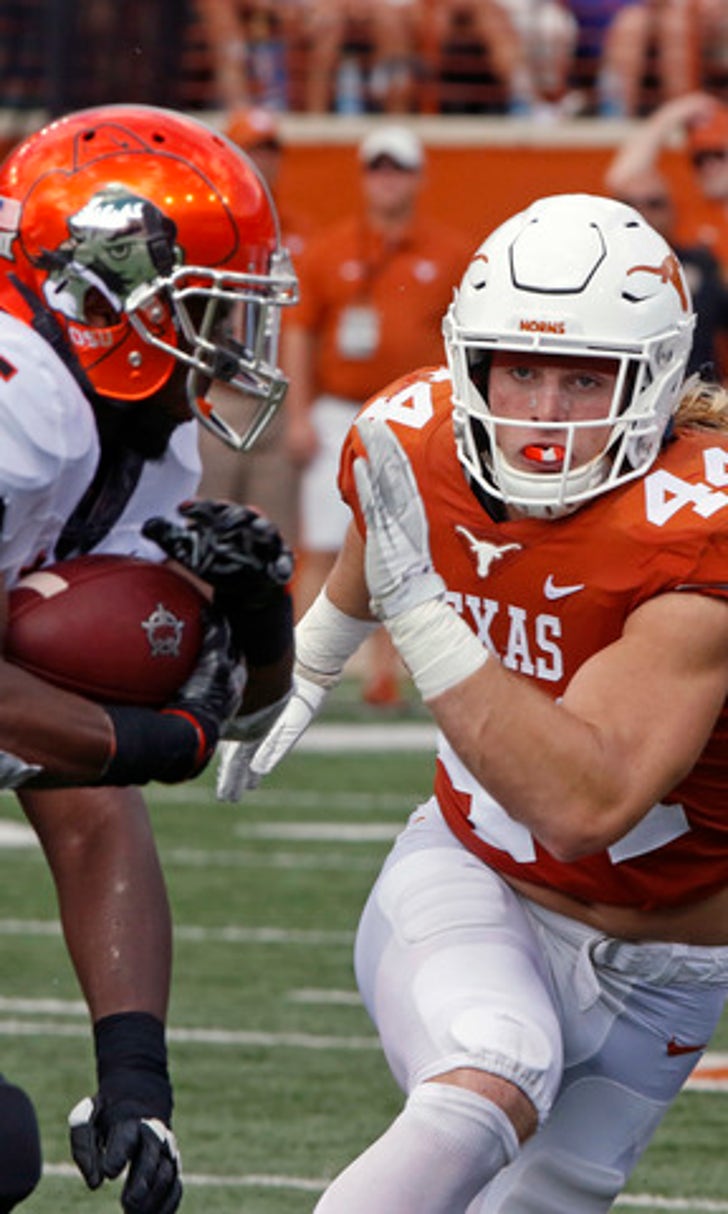 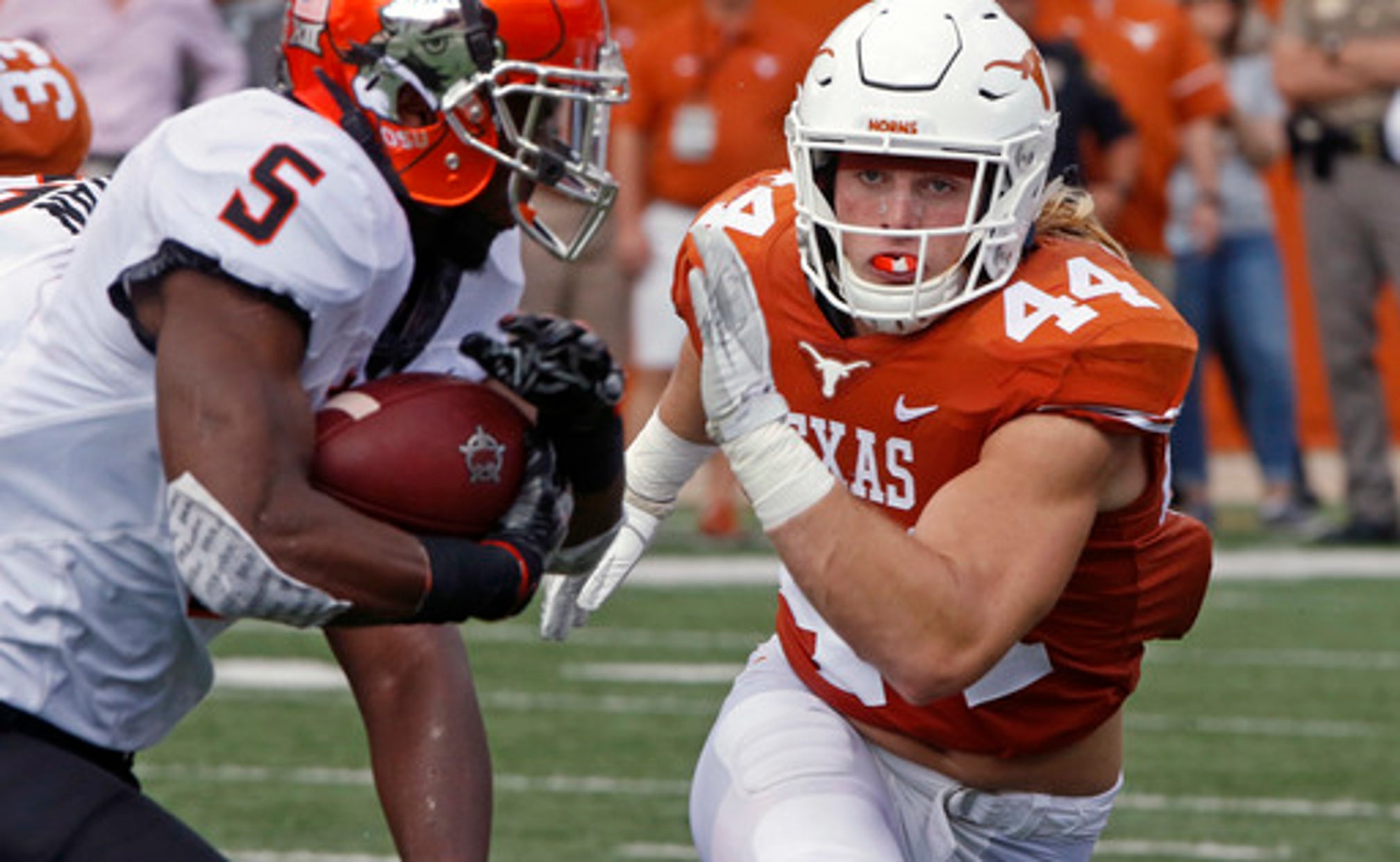 Barkley set the tone the first time he touched the ball. He took a direct snap on the second play of the game and blazed 69 yards for a touchdown on his way to 161 yards from scrimmage that are a nice addition to his Heisman Trophy bid.

McSorley ran for three scores for Penn State (7-0, 4-0 Big Ten), including a darting 13-yarder in the third quarter that made it 28-13 and led the record-breaking, white-out crowd of 110,823 at Beaver Stadium to sing along to ''Sweet Caroline.'' McSorley and Barkley combined for the knock-out blow, a 42-yard TD pass with Barkley easily burning linebacker Mike McCray and then making a juggling catch to increase the lead to 35-13 early in the fourth quarter.

Kansas State sophomore Alex Delton's first career touchdown pass with 2:25 left tied it at 35, but Mayfield and Anderson calmly went to work. The two-time Heisman Trophy finalist hit on a series of throws downfield before Anderson took a carry around the left side for the decisive score.

Making his second career start, Delton finished with 161 yards rushing and three TDs while going 12 of 14 for 144 yards through the air. Alex Barnes added 108 yards and a touchdown on just six carries.

It was the Sooners' nation-leading 14th consecutive true road victory, and it extended their run of dominance in Manhattan. They haven't lost to the Wildcats in their home stadium since 1996.

The Fighting Irish (6-1) turned all three USC turnovers into touchdowns, giving them their first victory against USC (6-2) when the Trojans were ranked since a 38-10 victory in 1995. The turnovers came on a fumble and interception by Sam Darnold and a dropped punt by Jack Jones.

Adams had an 84-yard touchdown run and finished with 191 yards on 19 carries. Wimbush ran for 106 yards on 14 carries as the Irish amassed 377 yards on the ground.

The Crimson Tide (8-0, 5-0 Southeastern Conference) improved to 11-0 in the traditional Third Saturday in October game under coach Nick Saban while dealing another blow to the slumping Volunteers (3-4, 0-4) and embattled coach Butch Jones.

Alabama outgained Tennessee 604-108 in total yards even with reserves manning the offensive backfield most of the second half.

Scarbrough's two 1-yard scores came with defensive linemen Da'Ron Payne and Quinnen Williams as lead blockers. Tide quarterback Jalen Hurts capped the opening second half drive with a 14-yard touchdown pass to tight end Irv Smith and then watched from the sidelines the rest of the way.

The Vols did snap a streak of 12-plus quarters without a touchdown after that move. Linebacker Daniel Bituli intercepted Tua Tagovailoa's pass and raced 97 yards down the left sideline for a touchdown.

Tagovailoa added big plays after his mistake. He scored on a 23-yard run and then hit fellow freshman Henry Ruggs III for a 60-yard touchdown pass with 4:49 left. Ruggs has five catches this season, all going for scores.

FORT WORTH, Texas (AP) - Kenny Hill matched his career high with five touchdown passes, KaVontae Turpin returned a punt 90 yards for a score after going backward to the 3 and the TCU defense dominated overmatched Kansas.

The Jayhawks (1-6, 0-4) had 21 yards total offense while tying an 81-year-old NCAA record with their 44th straight loss in a true road game.

With severe weather approaching, both coaches agreed to a running clock from the 12:49 mark of the fourth quarter with TCU leading by final margin.

Taylor finished with 126 yards on 22 carries.

Playing in his seventh game at Wisconsin (7-0, 4-0 Big Ten), Taylor tied a major college football record shared by five other backs for fewest games by a freshman to get to 1,000 yards.

Hornibrook shook off an interception on his second attempt of the day, finishing 16 of 24 for 225 yards to balance the offense. Maryland is 3-4 overall and 1-3 in the Big Ten.

It was the third consecutive down-to-the-end game for Miami (6-0, 4-0 Atlantic Coast Conference), which is off to its best league start since joining the ACC in 2004.

The Hurricanes needed last-second plays to beat Florida State two weeks ago and Georgia Tech last week. This one was nearly as dramatic.

Miami intercepted Syracuse's Eric Dungey four times, all in the first half.

Christopher Herndon had a career-best 10 catches for 96 yards and a touchdown for Miami. Jeff Thomas caught a 48-yard touchdown pass for the Hurricanes, who haven't had a winning streak this long since winning 34 straight from 2000 to 2002.

Cole Murphy kicked four field goals for Syracuse (4-4, 2-2), including a career-best 53-yarder with 5:23 left to get the Orange to 20-19. But Miami answered with a nine-play, 85-yard drive capped by Homer's TD run that helped the Hurricanes escape.

The Cowboys (6-1, 3-1 Big 12) scored the winning points on a 34-yard field goal by Ammendola on the first possession of OT. He missed a 29-yard attempt in the fourth quarter.

Though the field goal came first, Richards didn't realize the game ended with his play.

Texas (3-4, 2-2) had a first down on the Oklahoma State 12 after a pass interference penalty against A.J. Green.

Oklahoma State's Mason Rudolph passed for 282 yards. The Cowboys beat Texas for the fifth straight time in Austin, the most ever by a Longhorns opponent.

Off last week, Virginia Tech looked rested and focused and played that way, scoring in all three phases in the first half and bolting to a 35-0 halftime lead. Virginia Tech scored twice on defense, getting the first score of the game on defensive tackle Ricky Walker's 12-yard fumble return.

Jamal Morrow rushed for 73 yards and a touchdown for the Cougars (7-1, 4-1 Pac-12) on a rainy and wind night. Washington State coach Mike Leach called his team's 34-point loss at California the worst game the Cougars have played in his six years there.

The Buffaloes completed just 13 of 34 passes for 94 yards and were held to 174 yards of offense.

This was WSU's second shutout of the season, after Montana State in the season opener.

South Florida (7-0, 4-0 American) also scored at least 30 points in a game for a modern-era record 24th straight time, but needed to hold on after Tulane nearly clawed back from a 27-point hole.

Jonathan Banks passed for two touchdowns for Tulane, and Dontrell Hilliard's tackle-slipping, 16-yard touchdown run made it a one-possession game with 2:45 left. But the Green Wave (3-4, 1-2) failed to recover an onside kick and could not stop Darius Tice's run on third down, allowing the Bulls to run out the clock and drop Tulane to its first home loss this season.

USF had never before opened a season with seven straight victories. But now first-year coach Charlie Strong can add that accomplishment to his resume, one season after being run out of Texas.

Lewerke struggled for much of the game, but he was able to connect with an open Davis to the left side of the end zone. The extra point by Matt Coghlin put Michigan State (6-1, 4-0 Big Ten) ahead 10-9.

On the next possession, the Spartans forced an Indiana punt - one of 17 the teams combined for. Then LJ Scott ran 18 yards for a touchdown for Michigan State, which may have actually helped the Hoosiers because it gave them the ball back with 1:49 remaining and a chance to tie it.

But Indiana (3-4, 0-4) wasn't able to cross midfield before turning the ball over on downs.

It was tied in the third quarter before Killins bolted down the right sideline for a 79-yard touchdown run to put the Knights ahead for good.

Central Florida (6-0, 4-0 American Athletic Conference) became bowl eligible, matched its win total of last year and improved to 6-0 for the first time in the 39-year history of the program.

The Midshipmen (5-2, 3-2) kept it close, but their chances of pulling off an upset dwindled after quarterback Zach Abey was forced from the game in the third quarter. Abey was dazed from a hit to the helmet at the end of a run and had to be helped off the field.

FAYETTEVILLE, Ark. (AP) - Kamryn Pettway rushed for 90 yards and three touchdowns and Auburn bounced back from a loss to LSU.

The rushing yards are the most for Pettway since he gained 128 in a win last month over Mercer, and the Tigers (6-2, 4-1 Southeastern Conference) rushed for 345 yards overall. They outgained the Razorbacks 629-334 and have outscored their SEC West counterpart 108-23 over the last two seasons.

Jarrett Stidham completed 19 of 28 passes for 218 yards and rushed for a touchdown for Auburn.

Ebner's 9-yard TD catch from Brewer drew Baylor within two, but Preston got immediate pressure on the two-point try and ended Baylor's chances. It was West Virginia's first win in Waco in three tries since joining the Big 12 in 2012.

OXFORD, Miss. (AP) - Derrius Guice ran for a season-high 276 yards and a touchdown to lead LSU.

LSU (6-2, 3-1 Southeastern Conference) has won three straight games. Danny Etling threw for 200 yards and two touchdowns and coach Ed Orgeron won in his return as a head coach to Oxford. Orgeron was the Ole Miss coach for three years from 2005-07.

The 5-foot-11, 218-pound Guice ran for 126 yards in the first half, which was already good enough for his season high. It was the biggest reason the Tigers had a 13-6 by halftime and the junior was far from finished.

Ole Miss (3-4, 1-3) came into the game with the SEC's most prolific passing offense, but struggled for pretty much the entire night against LSU's defense.