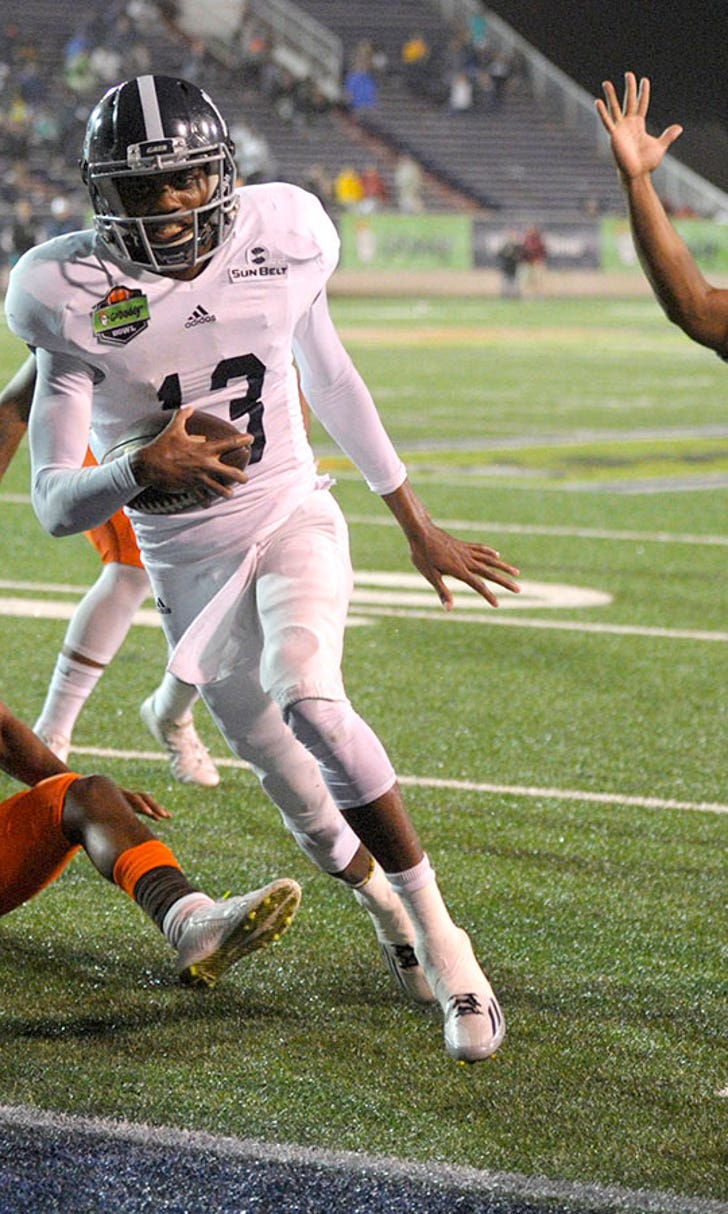 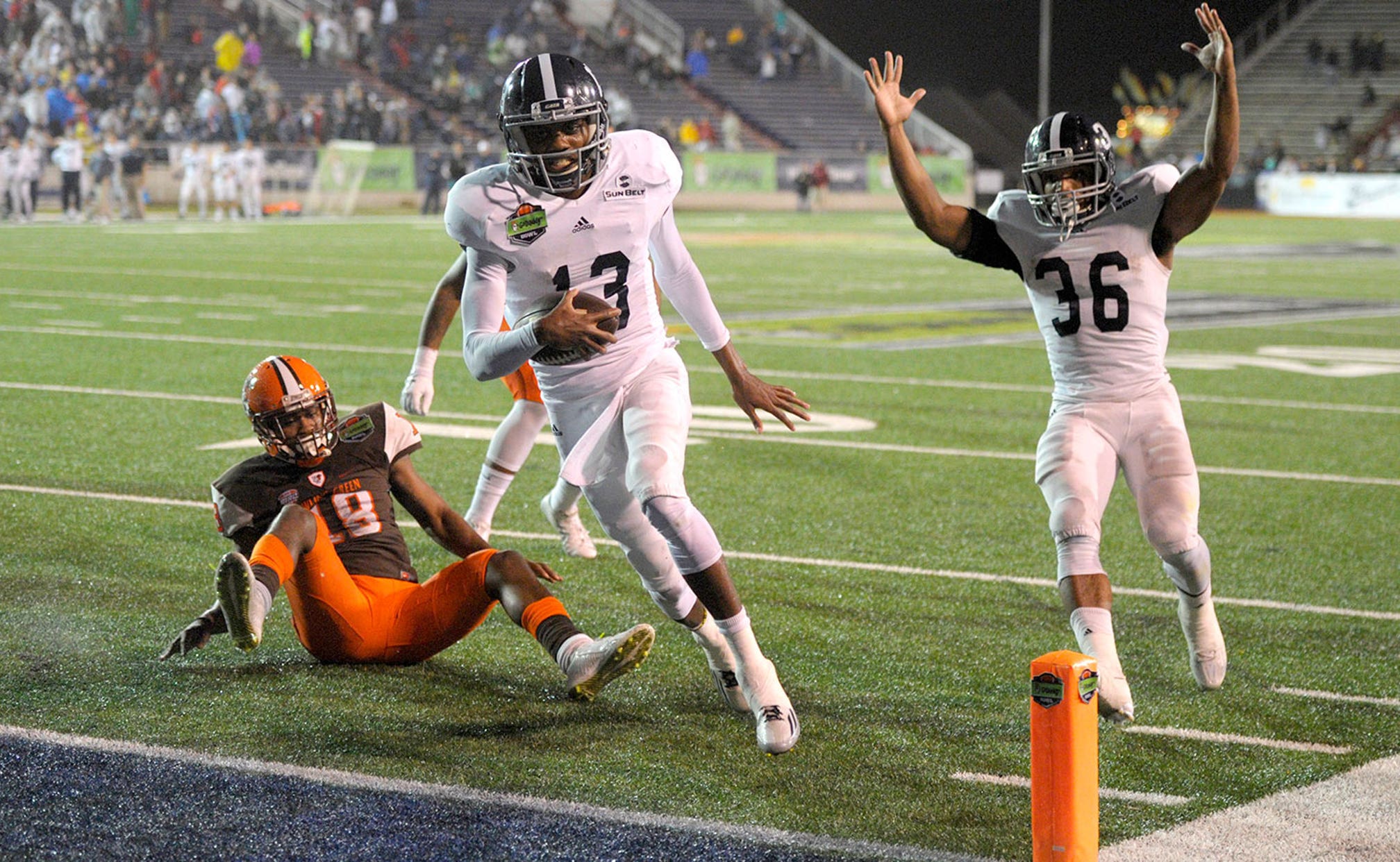 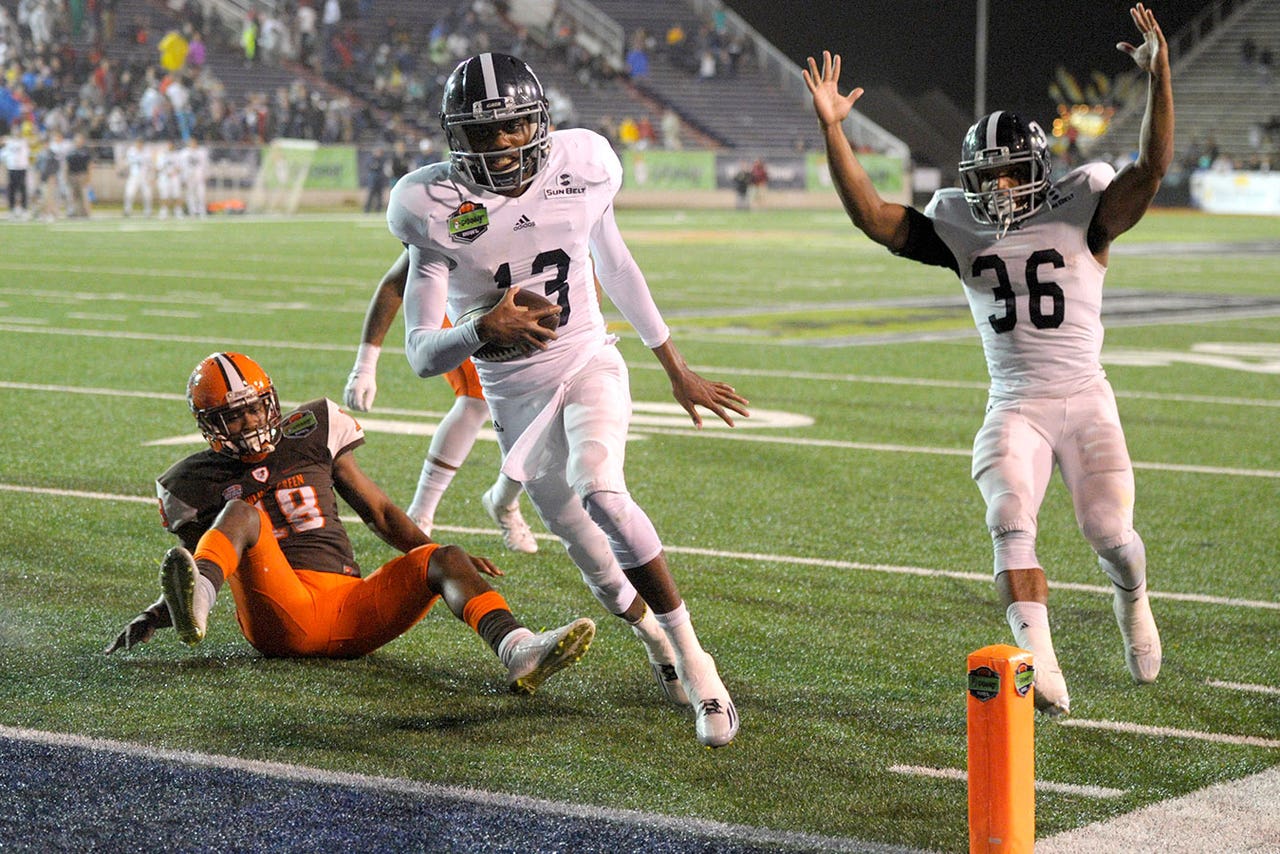 MOBILE, Ala. — Georgia Southern quarterback Favian Upshaw blew past Bowling Green's defensive line and linebackers and split two safeties, showing off impressive speed on his way to the end zone.

But as his 80-yard touchdown run neared completion he slowed down a little and was nearly caught.

"I started out pretty fast," Upshaw said, grinning. "But I got a little tired there at the end."

It's hard to blame him. After all, he wasn't used to running that much.

Usually the backup quarterback with a limited role, Upshaw ran for 199 yards and four touchdowns to lead Georgia Southern over Bowling Green 58-27 in the GoDaddy Bowl on Wednesday night.

Georgia Southern (9-4) won the first bowl game in school history in the first year it was eligible to go to the postseason. The program transitioned to the Football Bowl Subdivision in 2014.

The Eagles prevailed thanks to their trademark running game. They had 452 yards rushing to top their nation-best season average of 355.6 yards.

The 6-foot-1, 170-pound Upshaw, who was named the game's Most Valuable Player, usually splits time with starter Kevin Ellison. But he had a much bigger role against Bowling Green — especially in the second half.

In the team's previous 12 games Upshaw had run for a total of 384 yards and two touchdowns.

"Favian had the hot hand," Georgia Southern interim coach Dell McGee said. "He was reading the zone option really well and we just felt we should go with him."

Bowling Green was undone by a brutal stretch in the third quarter that included two fumbles by quarterback Matt Johnson deep in the Falcons' own territory.

It helped Georgia Southern score three touchdowns — including two by Upshaw — in three minutes and turned a 30-27 game into a blowout.

The game was tight for much of the evening, but Georgia Southern started to pull away late in the third quarter when Upshaw's 80-yard touchdown run gave the Eagles a 37-27 lead.

Then Bowling Green — specifically Johnson — fumbled away any chance at a comeback on a rain-soaked evening at Ladd-Peebles Stadium.

"It was the third quarter from hell," Johnson said.

Johnson fumbled on Bowling Green's 14 when he lost the ball as he winding up to make a pass. Georgia Southern scored two plays later when Matt Breida ran for a 1-yard touchdown to push the advantage to 44-27.

On the ensuing drive, Johnson fumbled again when trying to make a handoff at the Bowling Green 10. Two players later, Upshaw ran for an 8-yard touchdown and the rout was essentially complete.

It was a surprising turn of events considering the first two quarters were full of interesting and sometimes off-the-wall, back-and-forth football.

The Falcons' first touchdown came on a botched play when a bad snap forced Johnson to abandon a planned running play. He regrouped and scrambled to his right before throwing to Roger Lewis for an easy 45-yard touchdown.

Georgia Southern had its share of interesting moments, too. The Eagles blocked a Bowling Green extra point and Matt Dobson returned it 98 yards for the rare two-point score.

The Eagles briefly took a 23-20 lead late in the second quarter when they scored on a 31-yard pass from Ellison to Montay Crockett, which was only the team's fourth passing touchdown this season.

Bowling Green responded with a quick touchdown drive — capped by Travis Greene's 5-yard run — to take a 27-23 lead into halftime.

But the rain became more consistent after the break and Georgia Southern took advantage, capitalizing on Johnson's fumbles and slowly grinding away for its first bowl victory.

Georgia Southern was an FCS-level powerhouse before jumping up to the FBS in 2014. The transition has been impressive — the Eagles have an 18-7 record over the past two seasons.

Bowling Green, which won the Mid-American Conference championship, was outgained 534 yards to 362. Johnson was 15 of 34 passing for 246 yards and three touchdowns.

He finished the season with 4,946 yards passing, falling just short of becoming the 15th quarterback at the FBS level to throw for 5,000 yards in a season.

Bowling Green Falcons
share story
those were the latest stories
Want to see more?
View All Stories
Fox Sports™ and © 2020 Fox Media LLC and Fox Sports Interactive Media, LLC. All rights reserved. Use of this website (including any and all parts and components) constitutes your acceptance of these Terms of Use and Updated Privacy Policy. Advertising Choices. Do Not Sell my Personal Info