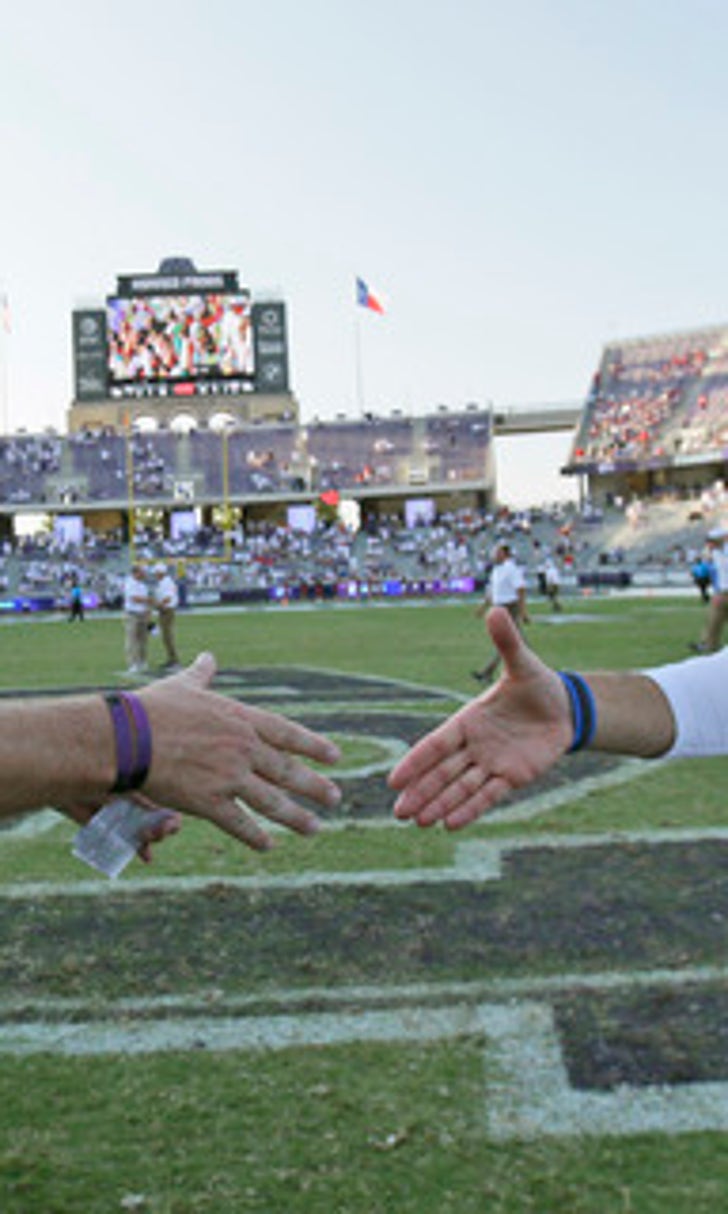 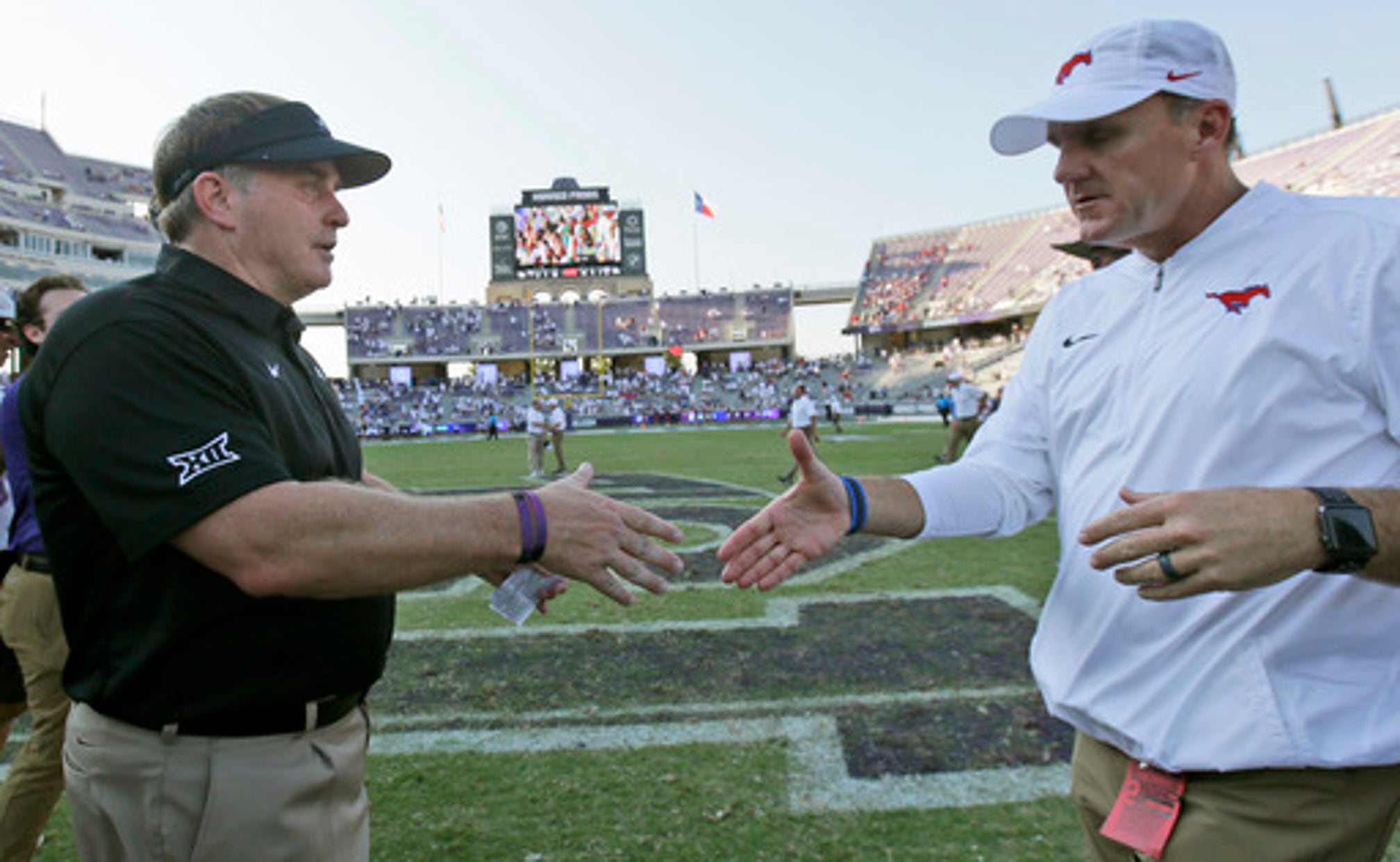 FORT WORTH, Texas (AP) When TCU practices those last-play passes during the week, the 20th-ranked Horned Frogs usually do so against air without any defenders on the field.

SMU didn't offer much resistance for the real thing Saturday in what was a momentum-shifting play.

Jalen Reagor made a leaping 38-yard TD catch between four defenders who didn't jump with him on the final play of the first half, finally putting the Frogs ahead to stay in a 56-36 victory.

''It made a huge difference, just give us a little something going into halftime, kind of deflated them a little bit,'' quarterback Kenny Hill said. ''That's the first time I've been in a game that I've ever seen a Hail Mary completed.''

The Mustangs (2-1) led 19-7 before Hill threw three TD passes in the final 7 1/2 minutes of the second quarter. The last was Reagor's catch in a crowd of Mustangs who seemed more like observers than defenders.

''We knew they were going to throw it,'' SMU coach Chad Morris said. ''We practiced it, we put our guys in position. They had one guy jump and we had nobody jump.''

Darius Anderson ran for two touchdowns for TCU (3-0) in the second half, including the first drive after halftime. Speedy running back Kenedy Snell also scored twice, while Hill completed 24 of 30 passes for 365 yards and four touchdowns.

Snell had a 10-yard TD run and later turned a short pass into a 71-yard sprint to the end zone . That long score put TCU up 21-19 with 2:40 left in the first half. Snell and Reagor are both true freshmen from Waxahachie, Texas, less than an hour from the TCU campus

''Obviously we put it in so (Reagor) could jump there. We already knew he could do it,'' Patterson said when talking about the two newcomers. ''We've been chasing Snell all through two-a-days.''

Josh Williams kicked his third field goal for SMU after Snell's big play, but TCU still had time. Taking over at its 44 with 10 seconds left after the kickoff, Snell had an 18-yard run before a timeout to set up the final play.

SMU was trying to start 3-0 for the first time since 1984. That was before the Mustangs were shut down in 1987 and 1988 by crippling sanctions and the NCAA's so-called death penalty

Ben Hicks threw for 305 yards and two touchdowns for SMU with two interceptions, one returned 19 yards for a touchdown by linebacker Travin Howard. Trey Quinn, an LSU transfer, had seven catches for 116 yards with a 58-yard TD that put the Mustangs ahead only 2 1/2 minutes into the game.

''When you play an opponent such as TCU and what they've built here, it comes down to four or five plays. We did some really, really good things today, but we did some things that were costly, very critical mistakes,'' third-year coach Chad Morris said. ''If we can learn from today, then it'll be a win down the road.''

COURT OUT OF SESSION

Courtland Sutton matched an SMU record with four touchdown catches last week against North Texas. He had one catch for zero yards against TCU, and on that play took a hard hit from a 326-pound defensive tackle.

While the Horned Frogs won going away, they were big favorites going into the game and there likely will be little room for them to move up much in the next poll - if at all.

SMU: In their third season under coach Chad Morris, SMU showed it has more offensive weapons than only Sutton. It was a big improvement overall, considering the Mustangs lost 33-3 at home to TCU last season.

TCU: The Frogs' defense gave up 463 total yards and some big plays even while containing Sutton. That will be a concern for Patterson going into Big 12 play. But there is plenty of experience on that defensive unit, so the players will know how to respond. There were also the three lost fumbles by the offense.

SMU: After its only non-conference road game, the Mustangs return home to play Arkansas State in their last game before AAC play.

TCU: The Horned Frogs open their Big 12 schedule at No. 9 Oklahoma State (3-0) next Saturday.