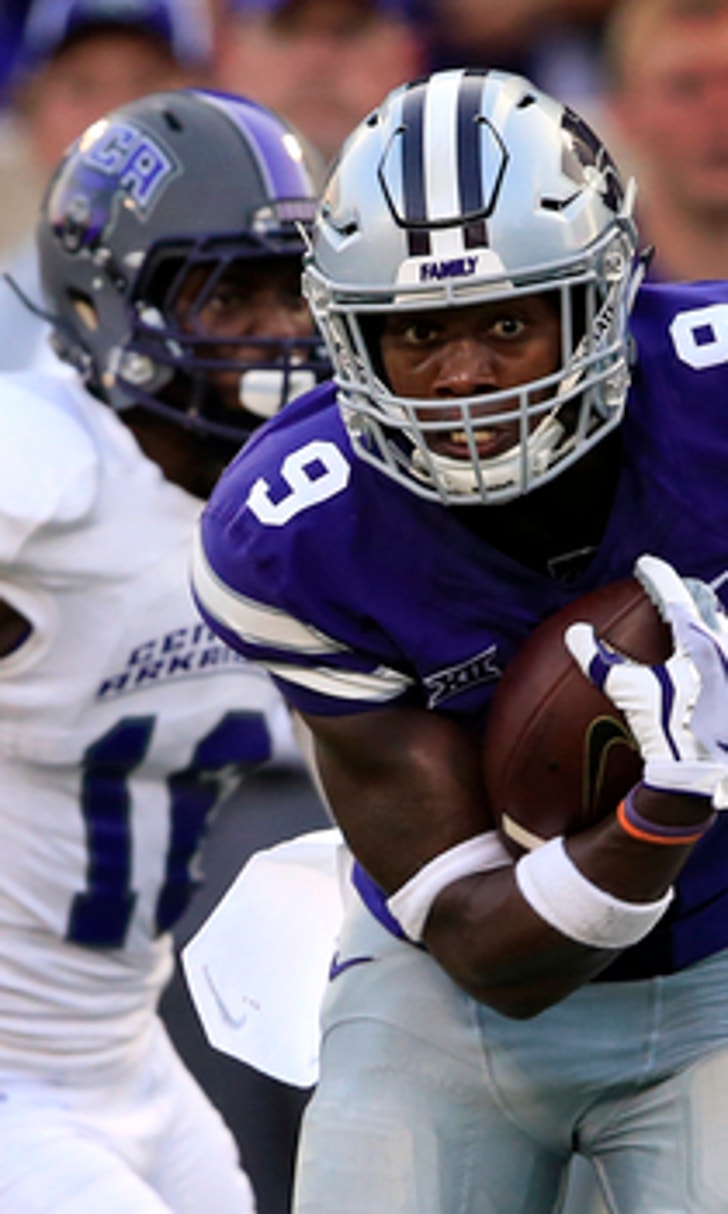 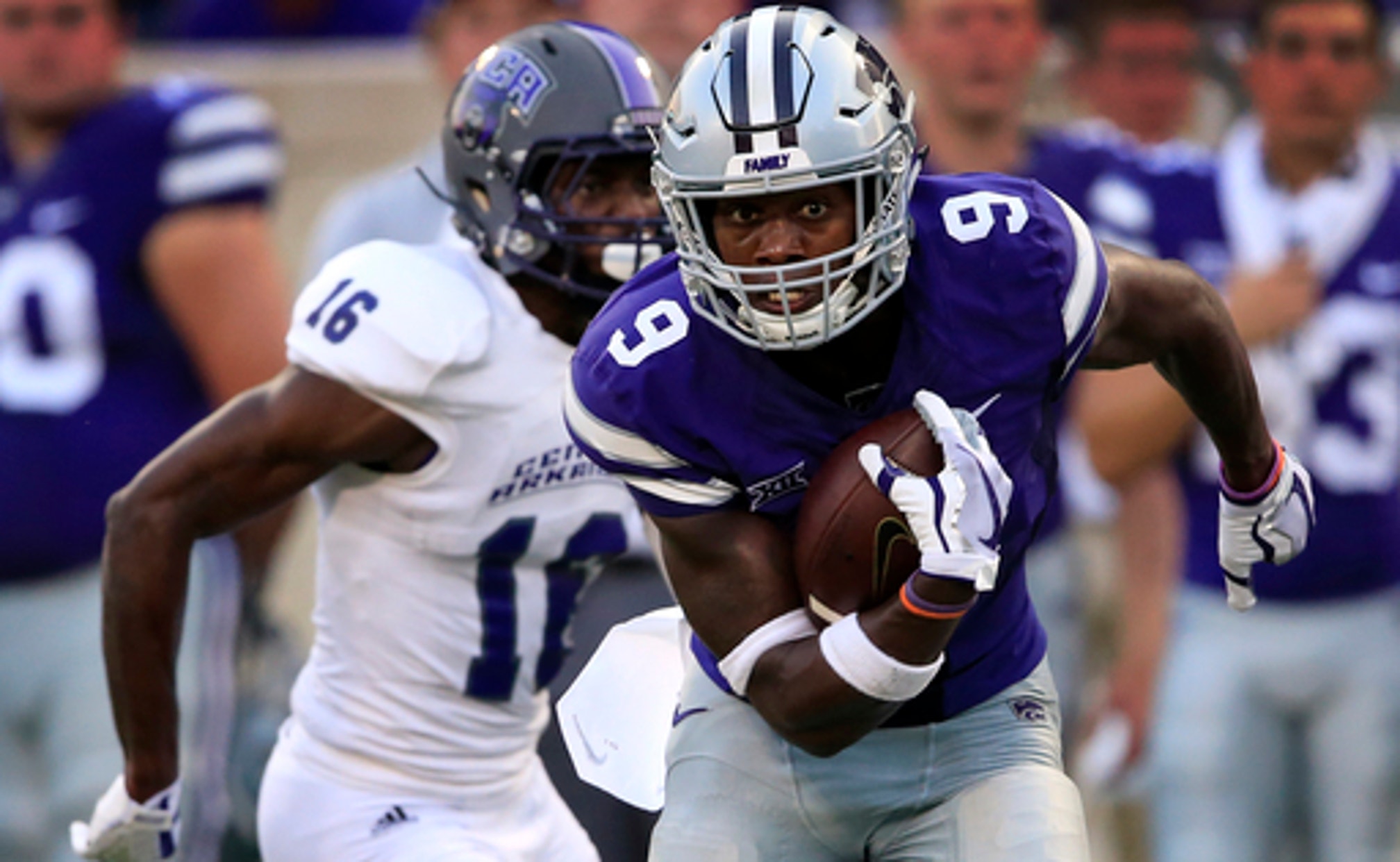 MANHATTAN, Kan. (AP) Bill Snyder was so miffed at Kansas State's inability to stop Central Arkansas's option Saturday night that he jokingly promised his defense would be back on the field at midnight for practice.

At least Jesse Ertz and the Wildcats' offense earned the rest of the night off.

Ertz threw for 333 yards and four touchdowns in only three quarters of work and seven Wildcats reached the end zone as No. 20 Kansas State overcame a shaky outing by its defense to pound the overmatched Bears 55-19 in the season opener for both teams.

''Jesse really played well,'' Snyder said. ''There were two visible throws, maybe three that were truly off the mark. Outside of that I thought he threw it awfully well, and managed it well.''

He managed it so well that his quarterback rating of 319.8 broke the school record.

''Jesse was great all camp, all summer,'' said Byron Pringle, who had three catches for 121 yards and a score. ''Hopefully we'll see more Jesse like that.''

Isaiah Harris added three catches for 118 yards and a touchdown, and Isaiah Zuber and Dalton Schoen also scored through the air for the Wildcats. Alex Barnes and Dalvin Warmack had touchdown runs while D.J. Reed returned a punt 62 yards for another score.

Things weren't quite so rosy for the Wildcats on defense.

Hayden Hildebrand threw for 198 yards and a touchdown for Central Arkansas, one of the top teams in the Football Championship Subdivision. Carlos Blackman added 114 yards on the ground, often getting loose when the Wildcats were unable to defend the Bears' option attack.

''Yeah, we'll practice tonight at midnight on playing the option,'' Snyder said with a wry grin. ''I mean, for somebody to be able to continually run the same play over and over and get positive yardage out of it tells a bad story. We have to get better.''

Snyder, who underwent treatment for throat cancer in the offseason, looked as energetic as ever on the sideline in his familiar purple wind breaker, barking at players and officials alike all night.

The 77-year-old coach had plenty to bark about, too.

The Bears played the Wildcats to a 10-10 draw through the first quarter, but Zuber's TD reception and Reed's punt return score blew the game open. The backups were in by the fourth quarter, and backup quarterback Skylar Thompson punctuated the night by leading Kansas State to one more touchdown.

''It was a very disappointing loss,'' Bears coach Steve Campbell said. ''We knew before we came in here that if you had flaws and weaknesses, Kansas State is the type of team that will shine a fluorescent light on it completely,''

Central Arkansas: The Bears returned 18 starters from a 10-win team, so it wasn't a surprise they made things tough on Kansas State early. But they didn't have enough speed, size or depth to hang with a team that many think could contend for a Big 12 championship.

Kansas State: There were plenty of teaching points after this one, regardless of the score. The defense blew too many coverages and gave up too many yards, and the defensive line was often manhandled by the Bears up front. Central Arkansas finished with 223 yards rushing.

The Wildcats expect to have one of the Big 12's best running games, but they were bottled up most of the night. Their two quarterbacks were their top two rushers, while Barnes managed just 29 yards on nine carries. ''I don't think we played poorly, they just did a really good job against our running game,'' he said. ''That's what opened up the passing game.''

Kansas State running back Justin Silmon, who is listed as the co-starter with Barnes, did not dress for the game. When asked about his status, Snyder replied: ''We're hiding him.'' Then, he admitted that Silmon ''will be out for probably two ballgames,'' but did not elaborate on why.

Reed's punt return TD atoned for a kickoff return to start the game, which he brought back 96 yards only to get caught short of the end zone. ''I'd like for his conditioning to be better,'' Snyder said, ''but that's my fault, not his. We'll make up for that this week.''

Kansas State plays Charlotte next Saturday before hitting the road to Vanderbilt.