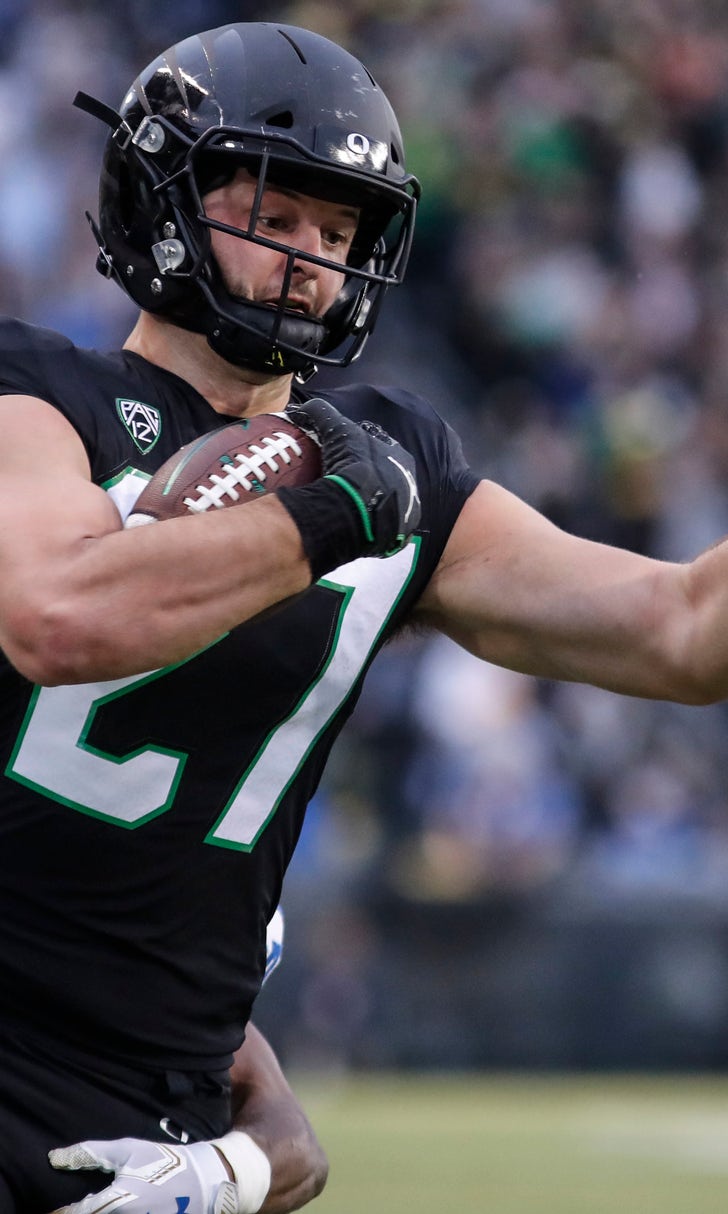 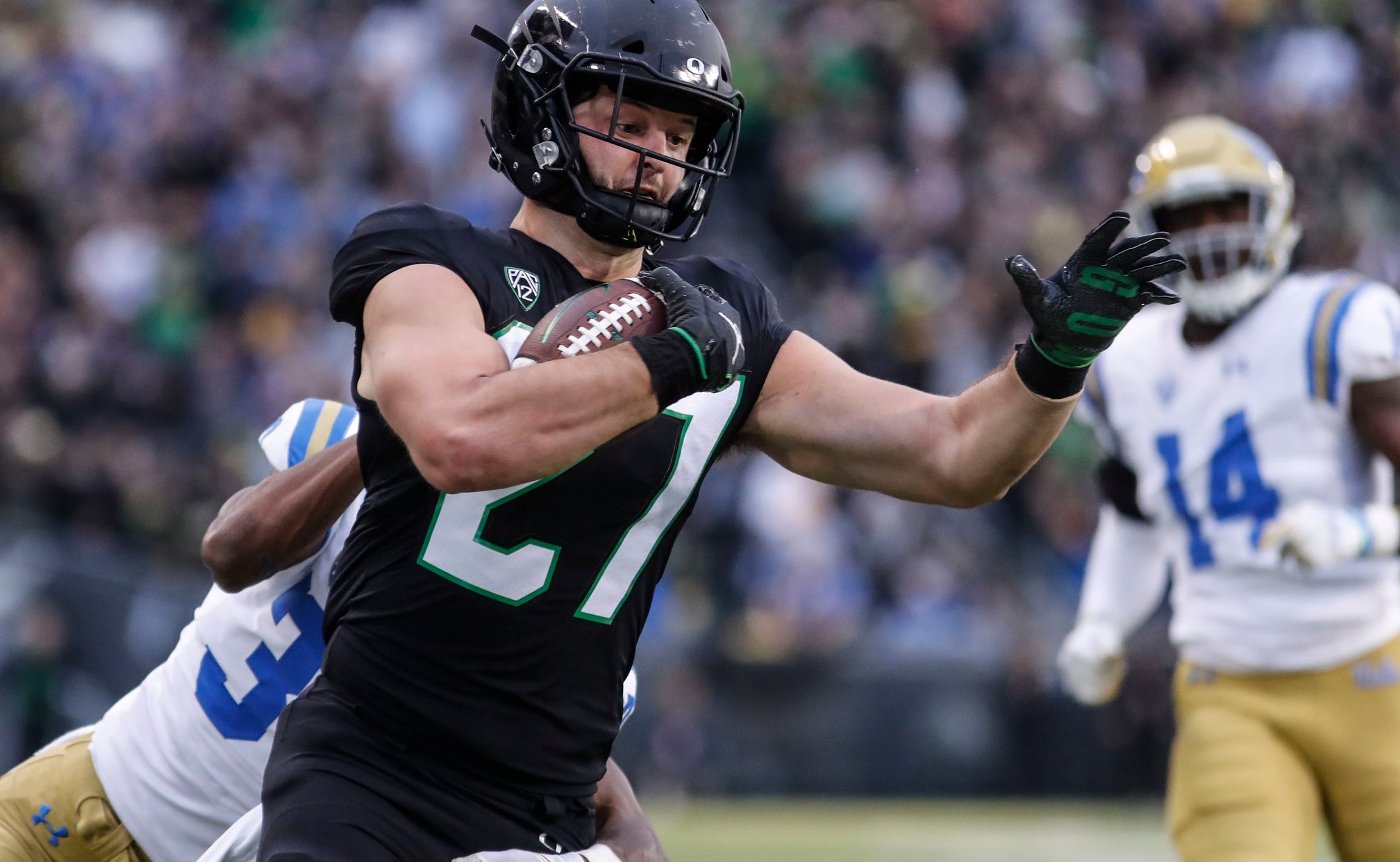 Ducks down the Bruins 42-21 to become bowl eligible

EUGENE, Ore. (AP) — After both cleared concussion protocol this week, Justin Herbert and Dillon Mitchell found a groove for the Oregon Ducks.

Herbert threw for 264 yards and two touchdowns and Oregon defeated UCLA 42-21 on Saturday in Bruins coach Chip Kelly's first game at Autzen Stadium since he left the Ducks following the 2012 season.

Mitchell caught eight passes for 156 yards and two touchdowns for the Ducks (6-3, 3-2 Pac-12), who became bowl eligible. The victory also snapped a two-game losing streak that had dropped the Ducks out of the rankings.

"He's a guy that pushes me and I try to push him as much as I can," Herbert said about his chemistry with Mitchell. "He's made me a ton better it's great to have a guy like that in the locker room."

During Kelly's four-year tenure Oregon made four straight BCS bowl appearances and he was lauded as the architect of the Ducks' up-tempo "blur offense." He was greeted with a warm ovation when he was introduced prior to the coin flip.

But he didn't get nostalgic.

"This wasn't about me. This was about a young team that's learning from their mistakes. A lot of teachable moments from this game," he said afterward. "I don't think that way. I'm a forward thinking guy. To me it's about the journey, it's not about thinking about memories or thinking about moments, it's about what's next."

Oregon is on its third coach since Kelly's departure. The Ducks let go of Mark Helfrich following the 2016 season, then Willie Taggart stayed for less than a year en route to Florida State, and now Mario Cristobal leads the Ducks.

"I would say it's something special," Mitchell said of his connection with Herbert. "It's something we work on."

UCLA started Dorian Thompson-Robinson at quarterback against the Ducks. He did not play last weekend in UCLA's loss to Utah because of a shoulder injury and Wilton Speight made his first start since the season opener.

Thompson-Robinson threw for 135 yards and a touchdown before Speight replaced him in the third quarter.

Oregon's Ugo Amadi scored on a 56-yard punt return to give Oregon an early lead.

Thompson-Robinson was intercepted in the end zone by Jevon Holland, and on the ensuing drive Herbert hit Mitchell with a 49-yard pass before CJ Verdell's 1-yard touchdown run — after the Ducks faked a field goal — put the Ducks up 14-0.

Herbert also found Mitchell for a 4-yard touchdown in the second quarter. But Thompson-Robinson threw a 63-yard touchdown pass to Caleb Wilson to get UCLA on the scoreboard.

JJ Molson missed a 56-yard field goal for the Bruins as time ran out in the half.

The Bruins stopped Oregon on a fourth-and-1 attempt and took over on the UCLA 47 but Thompson-Robinson was sacked and fumbled and Oregon's Justin Hollins recovered. A pass interference call got the Ducks to the 1 and Cyrus Habibi-Likio scored on a 1-yard run to put the Ducks up 28-7.

Speight took over at quarterback for the Bruins, leading the team on a 75-yard drive that ended with Joshua Kelley's 25-yard touchdown run. Kelley finished with 26 carries for 161 yards.

Oregon was hurt late in the third when starting center Jake Hanson was ejected for targeting on Speight.

Herbert hit Mitchell with a 67-yard touchdown in the fourth quarter that gave the Ducks a 35-14 lead, but the Bruins answered with Speight's 11-yard touchdown pass to Theo Howard.

Speight finished with 147 yards passing and a touchdown.

Tony Brooks-James ran for a 54-yard touchdown midway through the final quarter for the Ducks for the final margin.

UCLA: Kelly went 46-7 as head coach of the Ducks, including a 26-2 mark at Autzen Stadium. ... It was unclear if Thompson-Robinson was injured by the sack, but he was on the sidelines with his helmet on during the fourth quarter.

Oregon: Herbert surpassed 6,000 yards career passing during game. ... The Ducks also won the last five meetings with the Bruins in Eugene, but UCLA hadn't played at Autzen since 2013, when Marcus Mariota was Oregon's quarterback. The last two meetings have been at the Rose Bowl, including last season's 31-14 UCLA victory.

Oregon's group met with coaches last Sunday after the loss to Arizona and vowed to get better. It showed on Amadi's punt return and the fake field goal. Amadi said the group was committed: "Definitely. Especially throughout practice and meeting, we just emphasized taking ownership of it. You've got to make the most of it."

College Football's Top Plays: Week 4
Check out all the best plays from Week 4 of the college football season as they happen!
1 hour ago

The SEC Returns: What You Need To Know
Who's favored to win the SEC? Who's ranked? When will the grudge matches go down? We've got the answers ahead of Saturday.
18 hours ago

Ready to Roll
Alabama RB Najee Harris is Reggie Bush's second Playmaker of the Week, despite having not taken the field yet this season.
20 hours ago

Pac-12 Returns: What You Need To Know
Pac-12 football is back! When do games start? Is the conference playoff-eligible? Here's what you need to know.
1 day ago

Matt Leinart's Heisman Hopefuls
Who better to eye a Heisman Trophy hopeful than a Heisman Trophy winner? Here are Leinart's favorites heading into Week 4.
2 days ago
those were the latest stories
Want to see more?
View All Stories
Fox Sports™ and © 2020 Fox Media LLC and Fox Sports Interactive Media, LLC. All rights reserved. Use of this website (including any and all parts and components) constitutes your acceptance of these Terms of Use and Updated Privacy Policy. Advertising Choices. Do Not Sell my Personal Info