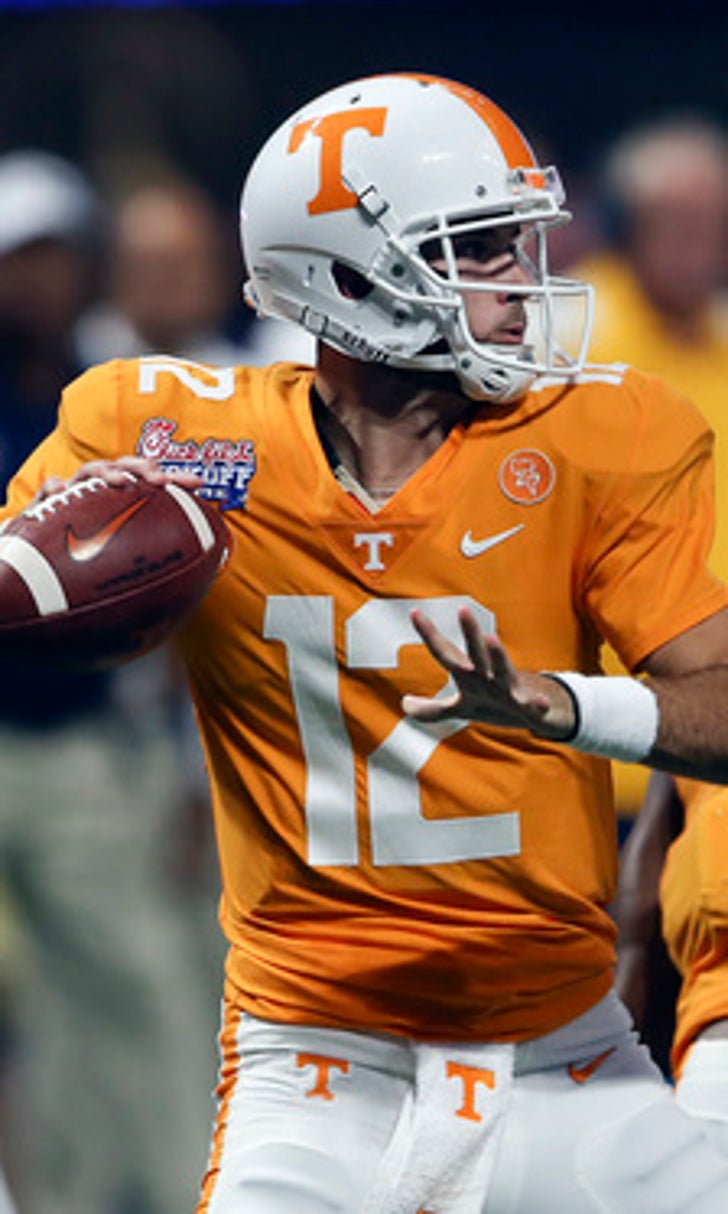 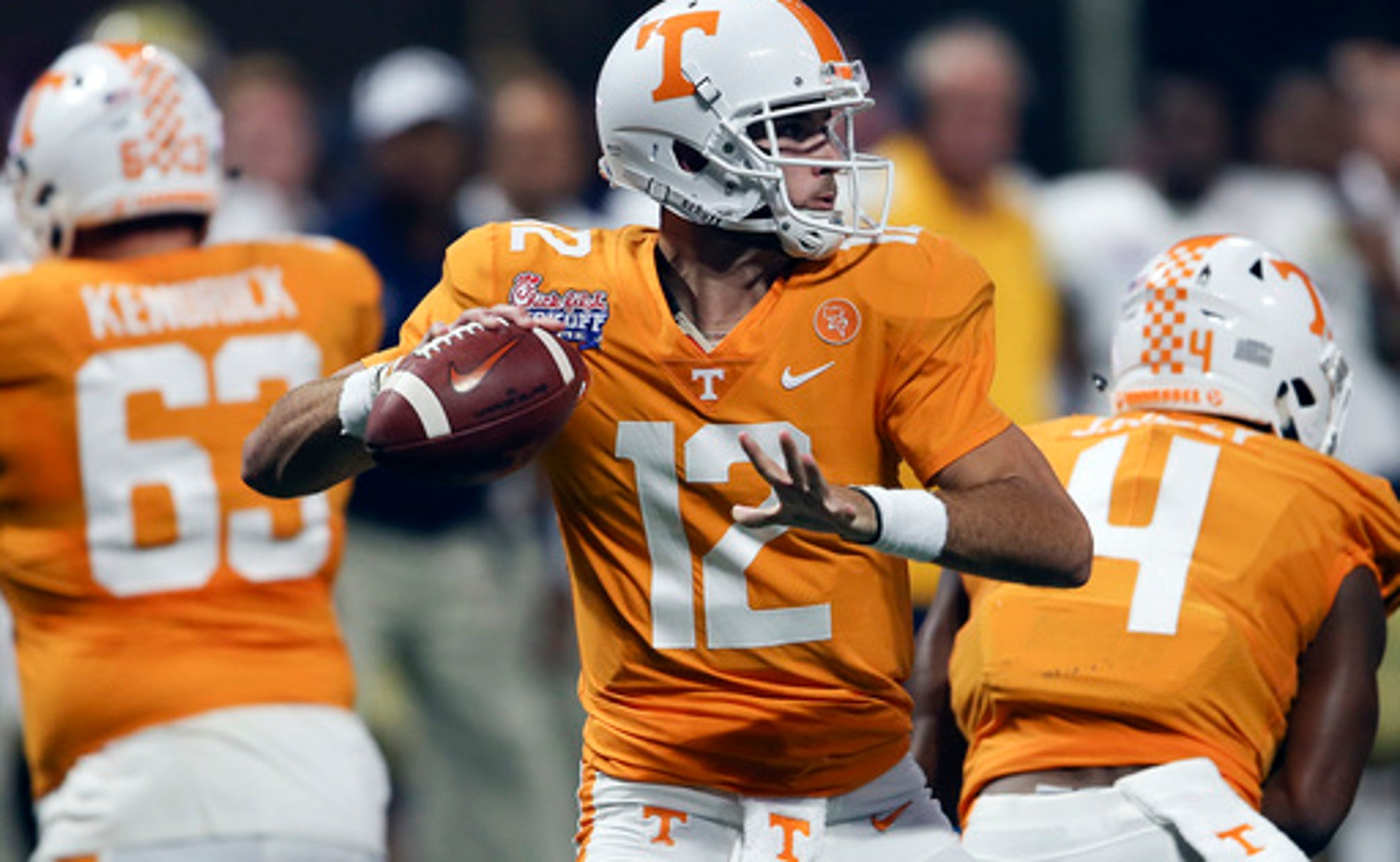 KNOXVILLE, Tenn. (AP) If Tennessee's Quinten Dormady improves as much throughout the season as he did over the course of his first career start, the Volunteers won't have to worry about their quarterback situation.

After winning a preseason competition with redshirt freshman Jarrett Guarantano , Dormady struggled initially but came on strong down the stretch to spark the 25th-ranked Volunteers to a 42-41 double-overtime victory over Georgia Tech. The performance should give the junior quarterback a confidence boost heading into Tennessee's home opener Saturday with Football Championship Subdivision program Indiana State (0-1).

His second-half surge certainly caught the attention of his teammates.

''I'm really proud of him, how he handled himself,'' running back John Kelly said.

Dormady said he wasn't particularly nervous about making his first start, but the statistics show how much he improved as the game wore on. After going 8 of 20 for 52 yards in the first half, Dormady was 12 of 17 for 169 yards with two touchdown passes the rest of the way.

''I wasn't focused on that,'' Dormady said. ''I was just focused on executing. It took us a little while to get going, but when we finally did hit (our) stride, it felt pretty good out there.''

Dormady never did get removed from the game, and he eventually rewarded the coaching staff's faith in him. He led Tennessee (1-0) to touchdowns on five of its last six possessions, including a game-tying 93-yard drive in the final five minutes of regulation. He never got sacked and didn't commit any turnovers.

''You always look at a starting quarterback like a starting pitcher in baseball,'' Tennessee coach Butch Jones said. ''You're gauged upon your win-loss record. We made the plays when we needed to. He put the ball in some locations that he needed to. Also, his footwork, his movement in the pocket (and) some things like that, he knows he needs to make the progress and progression from game one to game two.''

His performance should provide some hope that Tennessee has found a capable replacement for Joshua Dobbs , who started 35 games over the last four seasons before getting drafted in the fourth round by the Pittsburgh Steelers.

''I can't say enough about Quinten,'' offensive tackle Brett Kendrick said. ''He always had his composure. He reminded me a lot of Dobbs (in that he) was a calming presence on the sideline. There's no worry in him. You always want someone like that in a quarterback.''

Dormady's emergence in the second half and overtime was particularly noteworthy because it came without Jauan Jennings, who started the season as Tennessee's top returning receiver. Jennings got injured in the first half of the Georgia Tech game and is out indefinitely .

Jennings' absence will force Dormady to develop a rhythm with Tennessee's other receivers. He already appears to have found a favorite target in Marquez Callaway, who caught four passes for 115 yards and two touchdowns against Georgia Tech.

Tennessee's matchup with Indiana State should help Dormady build that trust with receivers while also correcting mistakes he made in the opener.

''For me, I think it's just making the easy throws,'' Dormady said. ''That comes with me and the receivers, just with our timing and things. ... We'll get things fixed. That will probably be the biggest jump. We've just got to make the routine plays.''

The Indiana State game also should provide an opportunity for Guarantano to make his debut. Jones said ''we have two very, very quality quarterbacks'' and that both would play Saturday.

Television cameras during the Georgia Tech game showed Guarantano sitting apart from Dormady on the sideline without wearing a headset, leading to questions about how the redshirt freshman was handling the backup role. Guarantano hasn't been made available to the media this week, but Jones spoke out in the redshirt freshman's defense and noted his backup quarterbacks typically don't wear headsets during games.

''They'll continue to compete'' Jones said. ''I know there was a lot out there with Jarrett, and all I can tell you is Jarrett's a good teammate. He's always been a good teammate. He's a competitor and wants to be it there but also has a tremendous amount of respect for everyone in this program and the players.''