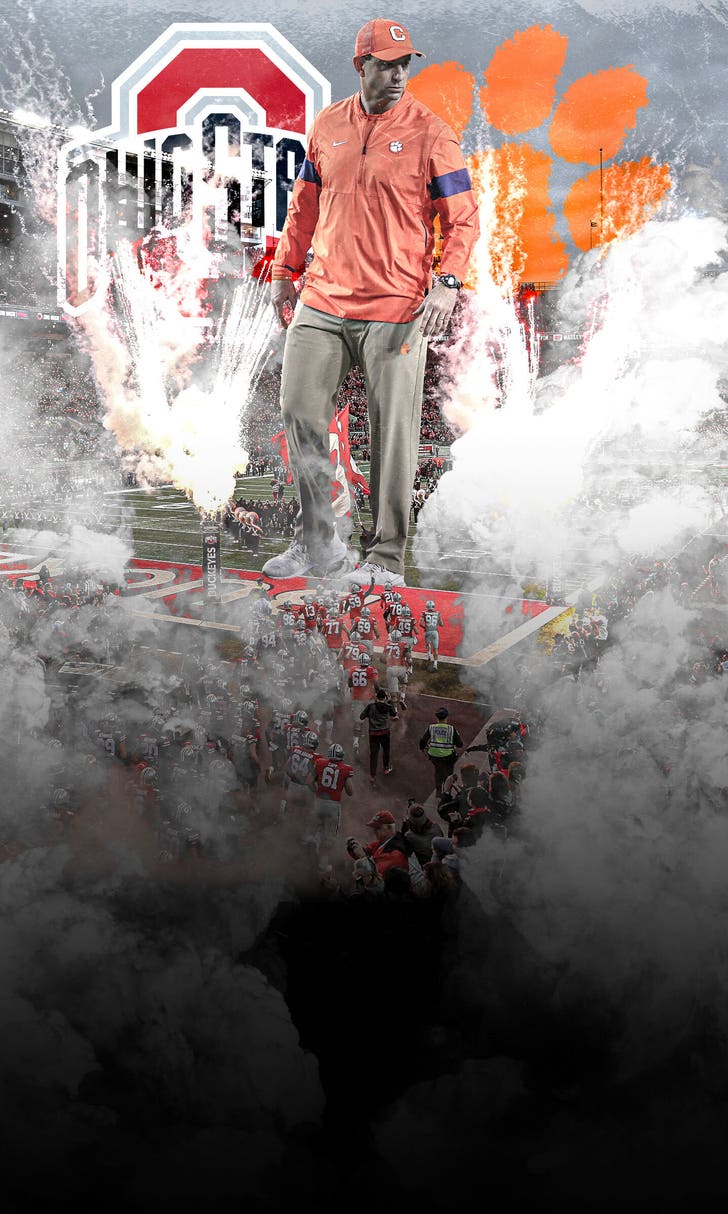 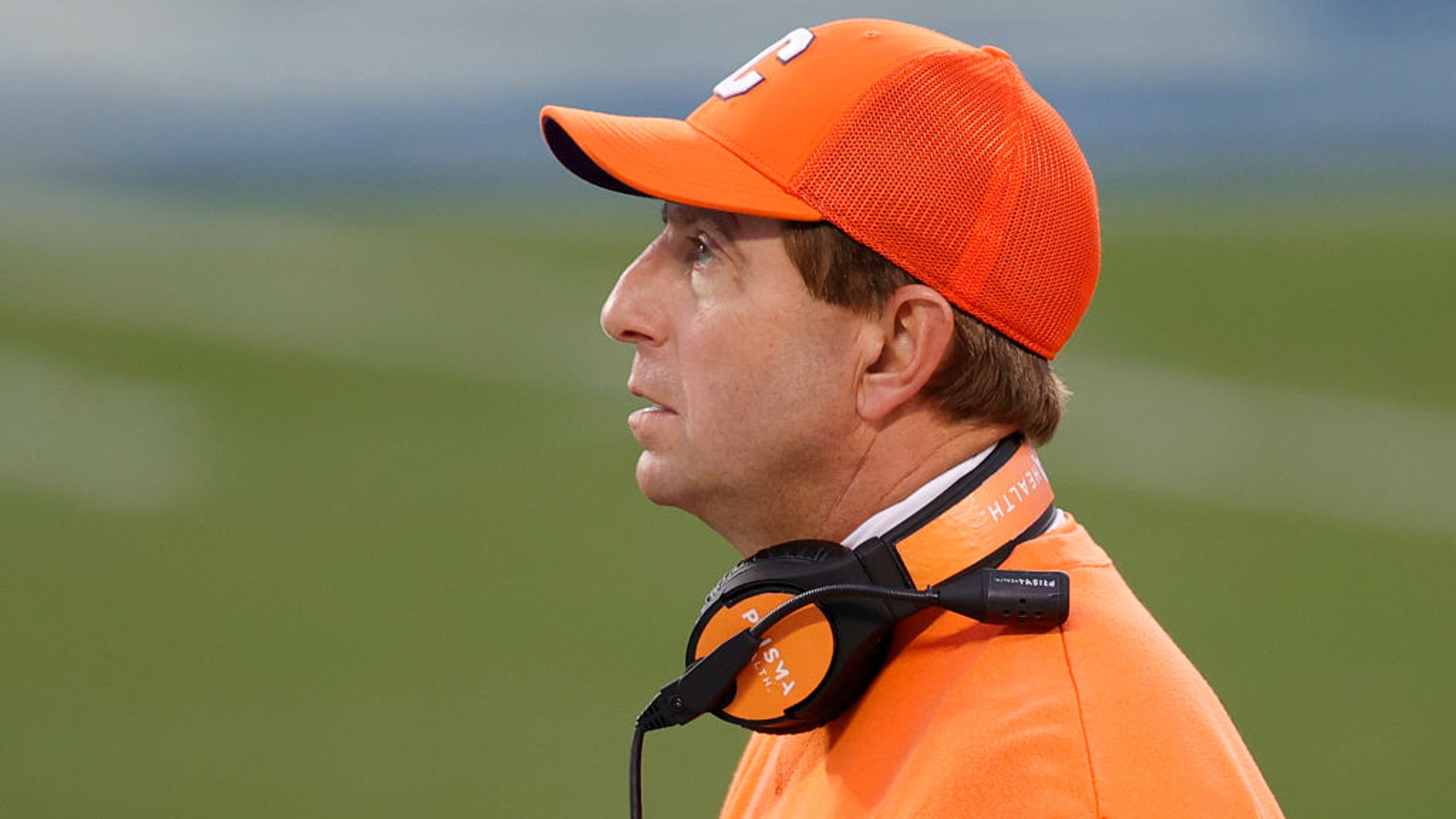 And now, he’s standing his ground, as the hornets continue to swarm.

Last week, the Clemson coach made waves when his USA Today/Amway coaches poll ballot was publicly disclosed, one of many made public, as is customary at the end of the season.

Inevitably, there are teams ranked arbitrarily high and low that raise eyebrows, but none more so than Swinney’s ranking for his Sugar Bowl opponent.

Ohio State ranks No. 3 in the College Football Playoff rankings and No. 3 in the Associated Press poll, despite playing just six games en route to clinching a Big Ten title.

But Swinney ranked the Buckeyes No. 11 in his poll and has spent the last week defending his opinion.

He knew his ballot would be made public for all to see, and he doesn’t think his opinion about the best 25 teams in America would matter much if Ohio State was not his opponent in the Playoff.

"You don't think I know that's going to be public?" he said. "But to me, right is right. It's not always easy to do the right thing. I absolutely knew that I would be the poster child for whatever. I could probably run for governor in Michigan and might have a good chance, but probably not very popular in Ohio."

An undefeated Ohio State, with two top 25 wins and a Power 5 conference title, met the criteria laid out by the CFP selection committee for inclusion in the national semifinals.

And, the truth is, an Ohio State with that résumé looked just fine to Swinney — in September.

When Swinney was asked about whether or not a Big Ten team should be included in the Playoff after canceling the season, reversing that decision, and then playing an abbreviated schedule, he was not just OK with the idea, but encouraging in his response.

"It’s a crazy year," he said. "Who knows how many games anybody is going to have? You have some of the best teams and coaches in that league. It’s not their fault. They’ve worked their butts off."

Quite the reversal on Swinney's part.

Swinney said Monday that ranking Ohio State outside the top 10 had everything to do with the amount of games played, and he made clear that he thought Texas A&M, Oklahoma, Florida and Cincinnati each were penalized for playing more games than some.

"These games matter," he said. "That game against LSU, that was a big deal for Florida."

He’s right. Losing to a three-win LSU team in the second week of December does matter.

So does the scoreboard, and the Gators lost to an LSU team with a true freshman starting his first game at quarterback and without three of its top players — at home.

The Bearcats played three top 25 opponents, according to the AP and Playoff rankings, and have a shot at finishing undefeated with a victory against No. 9 Georgia in the Peach Bowl.

The Aggies only lost came to consensus No. 1 Alabama, but they’re best and only top 25 win came against Florida. A&M has a chance to win the Orange Bowl against No. 13 North Carolina on Saturday.

Oklahoma’s losses came early in its season, to an Iowa State team that earned a Fiesta Bowl berth, and 4-6 Kansas State, which is hardly the kind of résumé worthy of a Playoff invitation, even for the six-time defending Big 12 champion Sooners.

"I didn't rank anybody who didn't play nine games or more in the top 10," Swinney said. "Nobody. And then after that, I said, OK, anybody who played at all, that's how I will rank that group. And that's why they were 11."

The Chanticleers were 11-0 and the last undefeated team left in Clemson’s state, South Carolina, when Swinney submitted his ballot. They lost an overtime thriller against Liberty in the Cure Bowl last Saturday.

If name checking Cincy and ranking the Chants ahead of the Buckeyes is Swinney’s way of giving the Group of 5 it’s due, so be it. But it’s doubtful Swinney would’ve done more than grin if either team was matched up against his Tigers than the Buckeyes.

As it stands, Clemson has never lost to Ohio State, and is well within reason to believe it won’t lose New Year’s Day.

However, if the Buckeyes needed any more incentive to beat No. 2 Clemson than a chance to win a national title, Swinney is still standing on that hornet’s nest and daring them to strike.